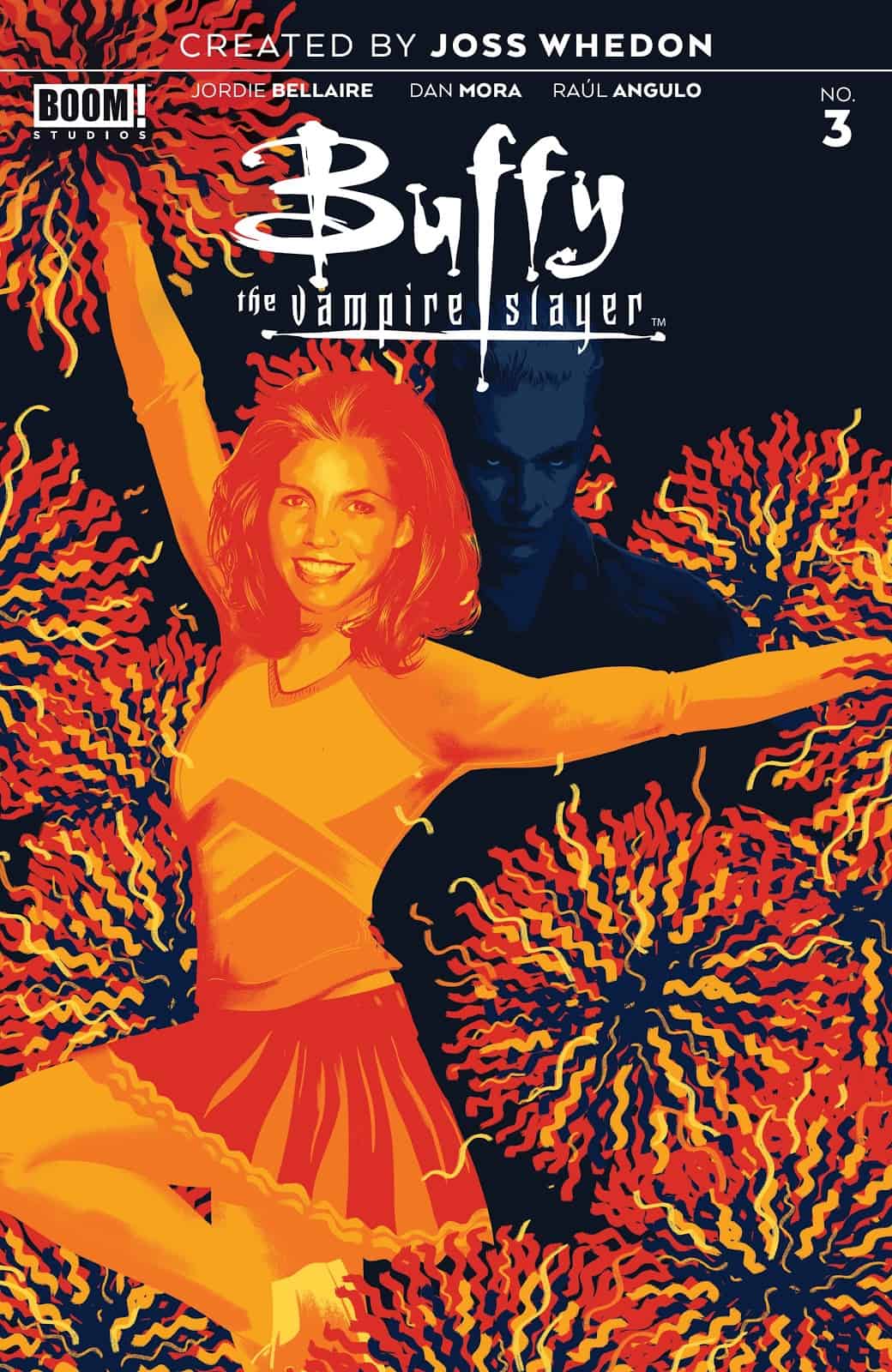 Spike (aka William) shows back up at the Magic Shoppe looking for Drusilla, only to find a giant bat creature that Drusilla accidentally released while interrogating Anya.  The bat flies away, screaming that it will kill all vampires.  On orders from Dru, Spike chases after it. 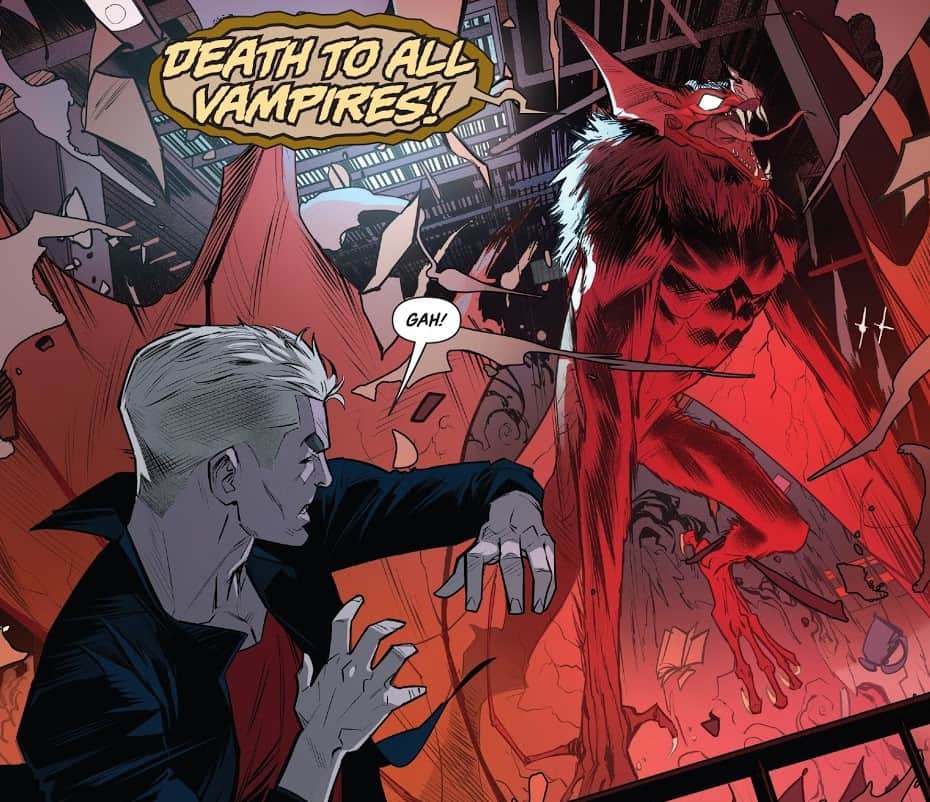 Buffy is on patrol when the bat shows up above Sunnydale, interrupting an outdoor music festival (which sees Giles singing and playing guitar).  Spike also catches up to the Bat which is wreaking havoc.  Cordelia tries to help out too but it’s Buffy that finally drives the bat off.  But not before finding out that it seems to be an ally of the Slayer.

Spike is joined by Drusilla, though, who now know that the Slayer is in town.  It’s only through the timely intervention of the Scooby Gang (only Willow and Xander of course).  Spike and Drusilla retreat and Giles uses a small vial to call Camazotz (the giant bat) home. 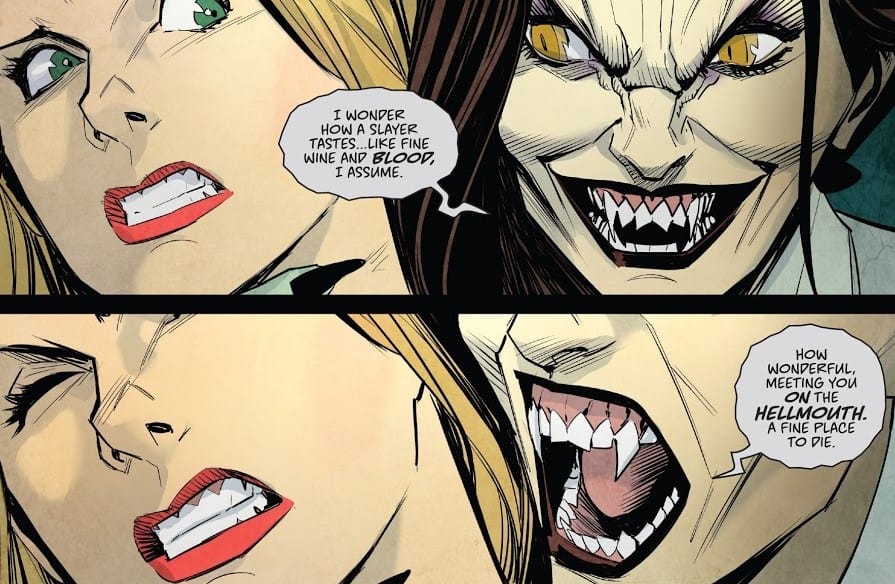 This issue is fun, but there’s some storytelling elements that just kind of bug me.

The characterization is spot on.  You’ve got Buffy “rebelling” against Giles (in a very passive aggressive sort of way) and her scoffing at the fact that he plays guitar and sings (mostly because he’s so old).  Spike and Buffy spar verbally.  Anya’s missing some of the normal human expressions (she refers to Sweden as her way of calling herself neutral). 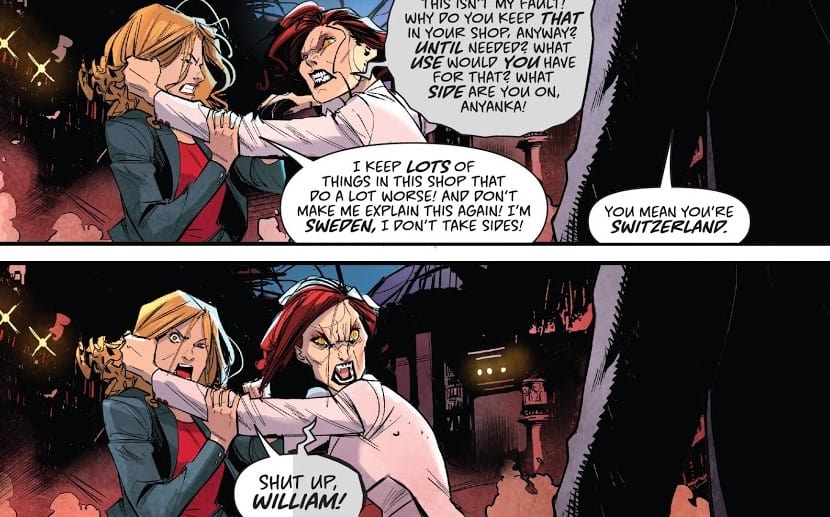 The battle is humorous too, with a giant bat first wrecking the inside of the Magic Shoppe and then terrorizing downtown Sunnydale.  And then for it to turn out to be friendly towards slayers?  It was just so…odd…it felt like typical Buffy shenanigans.

But the highlight for me may have come from Cordelia.  She’s been so incredibly nice so far in this series that it’s so unlike the Cordelia we know from the show (she even goes so far as to chastise Harmony for criticizing Giles’ music) but she’s finally reached her breaking point with a giant bat and then vampires. 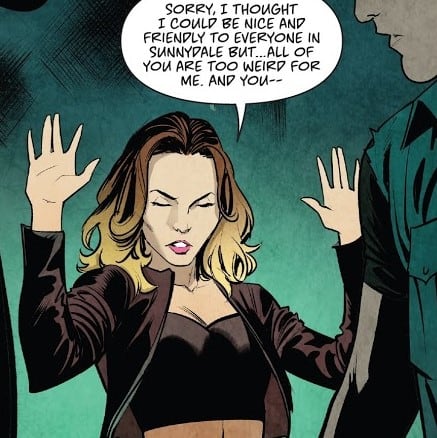 We also get some insight into this town.  Apparently weird things have been going on for quite some times, which is perhaps why Cordelia isn’t quite as freaked out as a normal person would have been.

But the problem is the ease at which Xander and Willow show up to help against Spike and Dru.  And to find out that they showed up only after Giles requested Willow to find a particular charm?  And yet Giles has been knocked senseless since the bat arrived?  And yet somehow found time to call Willow and she somehow found time to find the charm?  You see where I’m going with this? 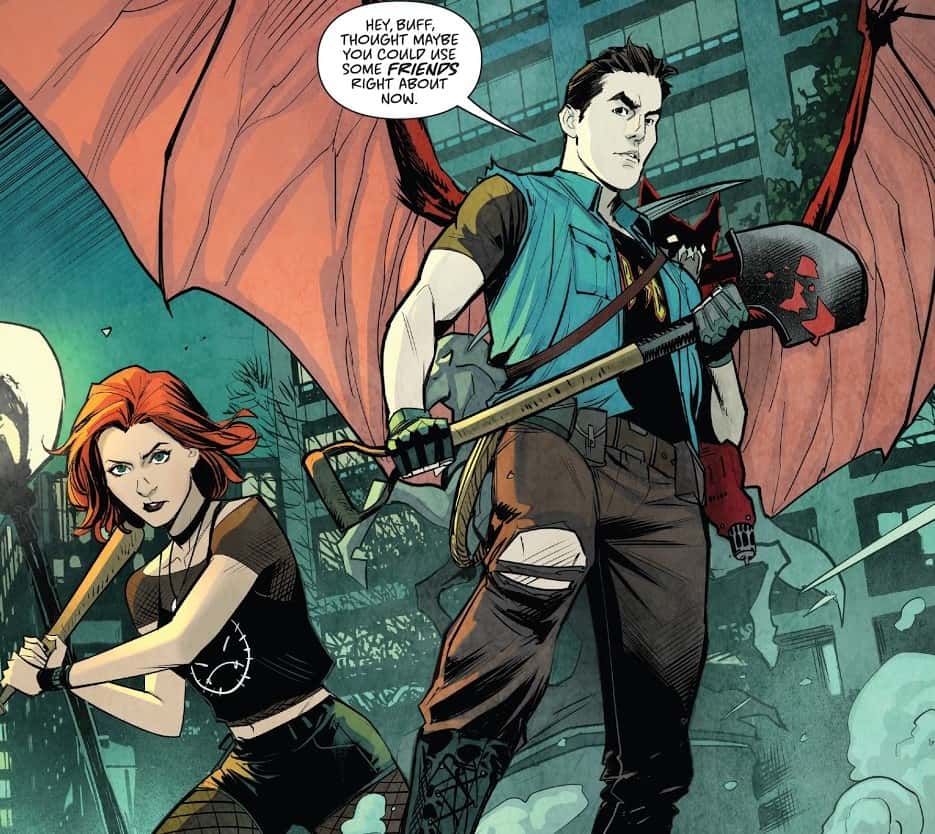 It’s not a bad story, but it just has some loopholes that are pretty glaring.

Still, as I mentioned earlier, the dialogue is on point, it’s witty, it’s charming, these characters really do feel alive.  And the art is fantastic as always, some of the best I’ve seen in a while, and definitely the best from a Buffy book (going back to Dark Horse’s series).

So despite some minor issues with the story, this is definitely a fun read.

Are you a fan of Buffy?  Or just of supernatural in general?  Maybe of witty teenagers?  Jordie Bellaire has nailed it perfectly helped with amazing art from Mora and Angulo.  This is such a great series.  It’s not too late to start from scratch!