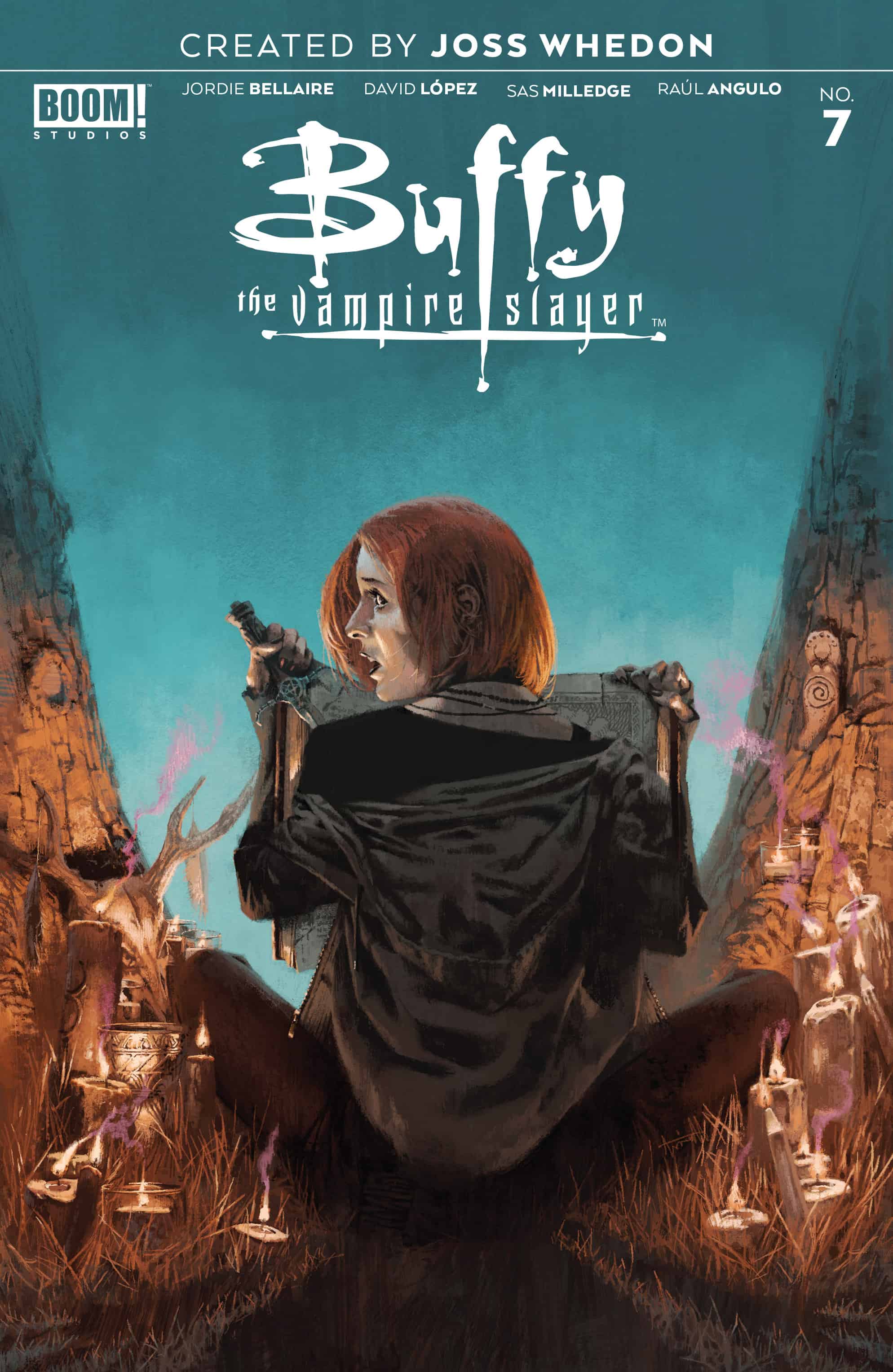 The fallout from Buffy and Willow's quest for the Soul Tie begins. In the previous issue, Willow had to forfeit half of her soul to procure the mystical gewgaw that would save Xander from being fully turned into a vampire. But despite her brave face, Willow is suffering mightily from losing half her soul. 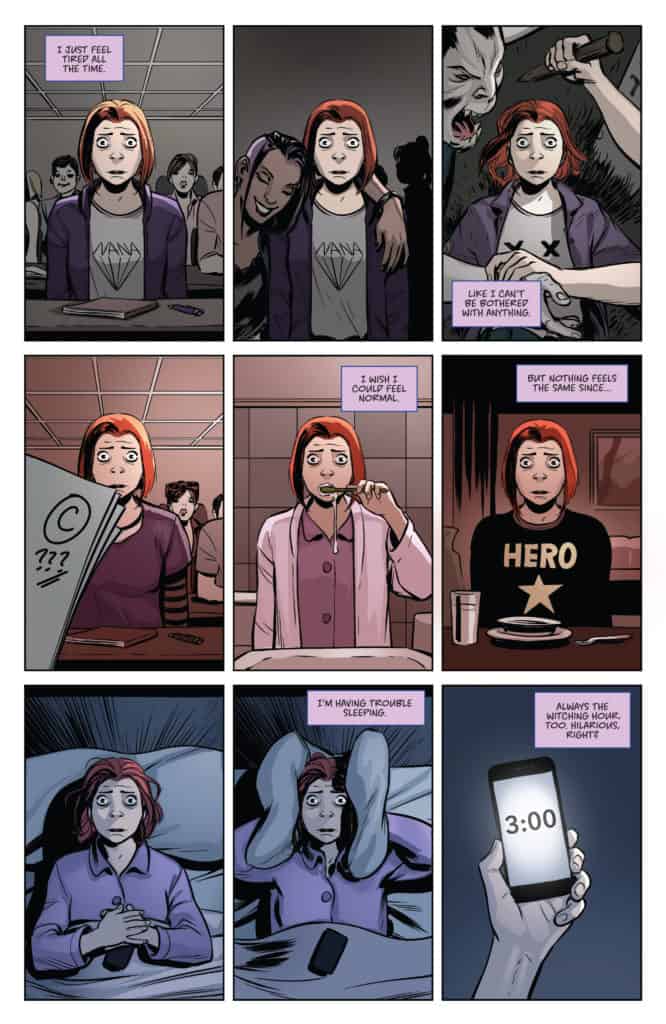 Worse, though, are the nightmares. She is tormented by a dark reflection of herself, threatening to subsume her in the wake of the loss of her more positive soulful attributes! 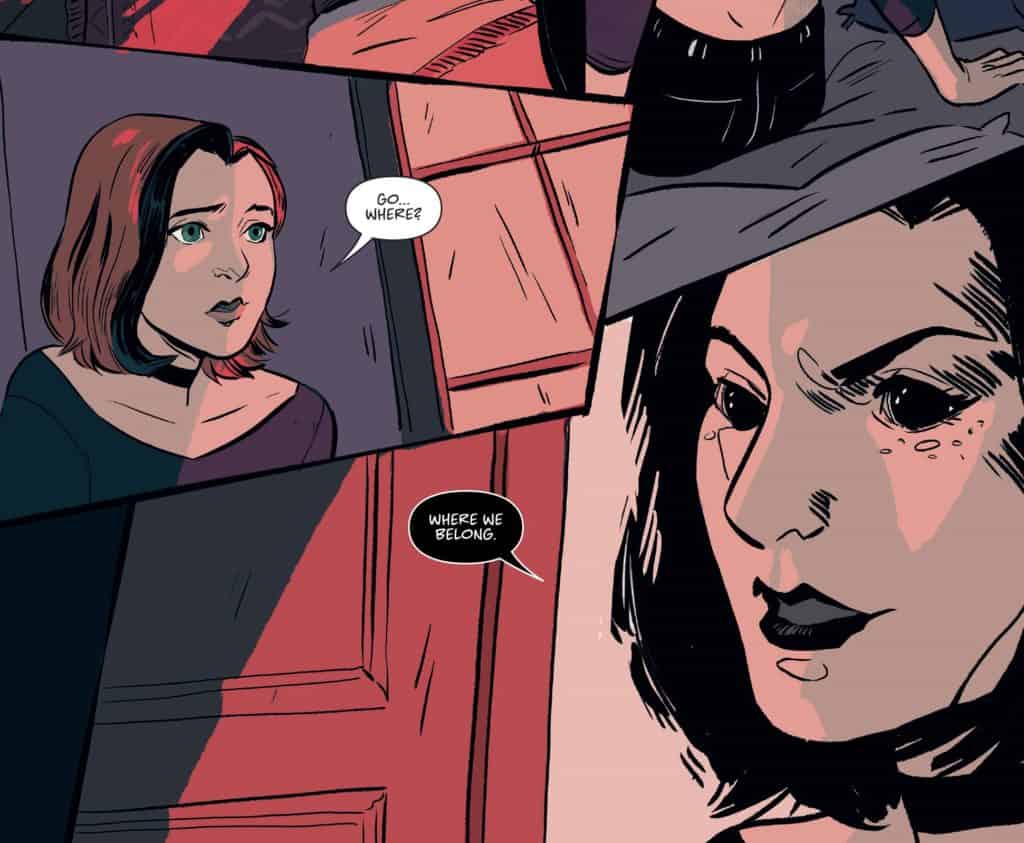 Dark times are coming, and Willow may never be the same again... but at the very least, Xander has been saved, even if he is part-vampire now! 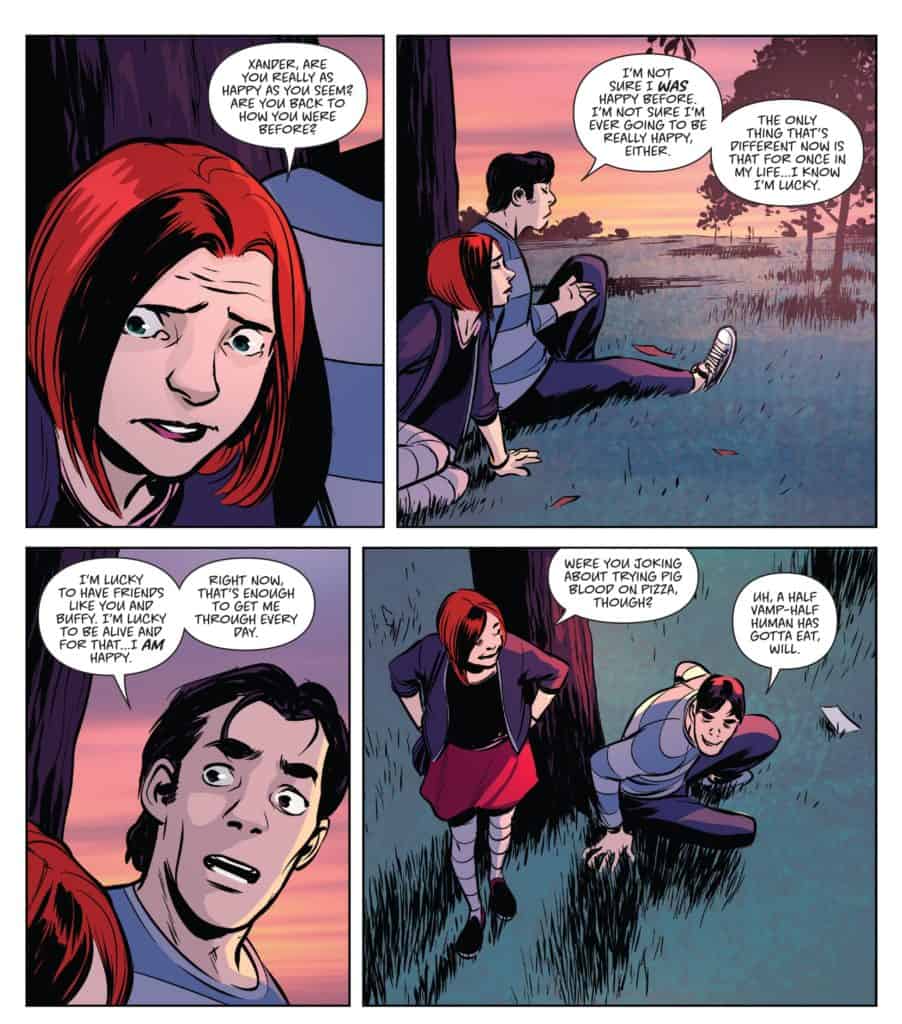 So, old-school Buffy fans, I’ll just say this from the top: just pretend it’s an alternate reality, okay? Like the world without shrimp. You’ll be happier that way and can accept this comic for what it is, rather than what it isn’t.

Rebooting such a beloved property as Buffy the Vampire Slayer takes a big pair of brass ones. After all, all parties involved are inevitably aware of the inevitable backlash from so-called “fans” who can’t stand it when someone tampers with “their” favorite toy. It’s not just a sense of protectionism toward the property, but also a perverse sense of entitlement that tends to manifest as the foulest trolling imaginable with a heaping helping of misogyny for good measure.

So, as an old-school Buffy fan, let me reassure you: this reboot’s all right, man. It doesn’t turn Buffy into something it isn’t, nor does it ignore its roots. Up to this point of a seventh issue, its biggest sin might be trying to cram too many name-characters into the mix in too short of an amount of time. Thus far, we have in a VERY short amount of time:

…on top of the Scooby Gang, Cordelia (who’s strangely nice), the Hellmouth, and Joyce Summers (who has a boyfriend who apparently is NOT a crazy John Ritter cyborg and I cannot handle this!!!!). Oh, and there’s a giant bat-thing that functions as some sort of Slayer-guardian who lives in a crystal or something. That’s a lot of to cover in a short amount of time, and although the addition of so many ingredients to the stew so rapidly is a bit jarring, everything falls (mostly) into a logical place. As long as a reader can accept that this ain’t your dad’s Buffy, and things are different here, everything should be copacetic.

All of which brings us to issue seven, the epilogue to our plucky heroes’ first full storyarc in this strange new reality. Almost straight out of the gate, Willow and Xander have been permanently altered from any recognizable form they’ve been in Buffys past, yet at the same time, they’re still intrinsically Willow and Xander, old-school BFFs of the Scoobies and the twin beating hearts of the Slayer machine. Fearless writer Jordie Bellaire (taking a break from her coloring duties of basically half of every comic published today) has clearly put a lot of thought into this world, knowing that she’s playing with a lot of fire: get it right, people will be pissed; get it wrong, people will be pissed. So, who needs a rulebook, then? Why not flirt with Dark Willow so early in the game? Why not turn Xander into half-a-vamp? (Okay, that may backfire since Xander’s intrinsic worth as a character is that he, as he puts it, “Is the guy no one is looking at.” His normalcy is his strength. We’ll see.) Taking these sorts of daring turns speaks not only to Bellaire’s ballsiness as a writer but also her faith (heh) in her own instincts.

This issue, over all, is a bit of a dip from previous efforts, though. It takes a fairly by-the-numbers approach to Willow’s psychiatric fallout from losing half her soul, pitting her against her own dark side in her dreams. It also, of course, puts the looming threat of Dark Willow on the table far, far earlier than the show did, and does so without Willow delving into the dark arts and being slowly corrupted. For the uninitiated, the importance of Dark Willow may not resonate, but there’s still an undeniable weight to these scenes as Willow confronts and ultimately defeats her own shade.

David Lopez, talented though he may be, doesn’t feel like quite the right artist to step in after Dan Mora (who drew issues one-four). Whereas Mora’s art had a kineticism that was matched by an uncanny knack for capturing the essence of the characters’ actors, Lopez has a more cartoony approach that meshes less-well with the Slayer’s world. This issue he’s joined by Sas Milledge (who contributes the dream sequences), whose style is much more fitting for its appointed sequence – but still a far cry from the bar set by Mora.

Overall, despite this issue being a bit of a comedown after the dizzying (and sometimes overwhelming) heights of the first six issues, it’s still a quality comic. Seeing Jordie Bellaire boldly reimagine the Hellmouth’s guardian and her world is exciting, especially in the context of 2019 society.

Although a little light on the original storytelling this issue, Buffy the Vampire Slayer #7 nonetheless delivers a well-crafted slice of character-driven introspection, turning two fan-favorite characters on their heads while still remaining true to who they are. That takes skill. Old-school fan or newly-converted, this is one Buffy reboot worth checking out.