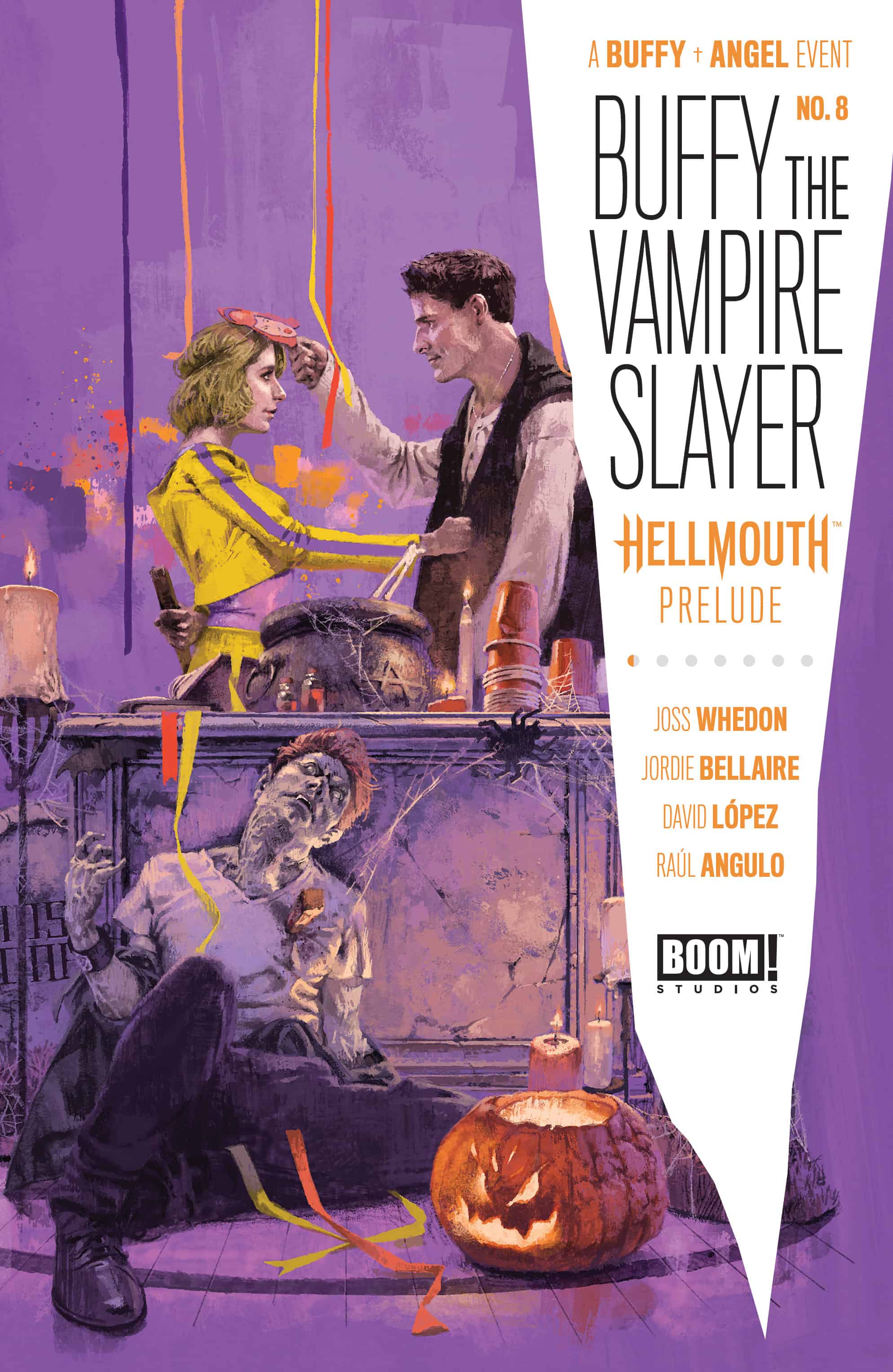 It's Halloween! Buffy and Xander attend a festive party for the occasion, although Buffy isn't quite feeling the spirit of the holiday. 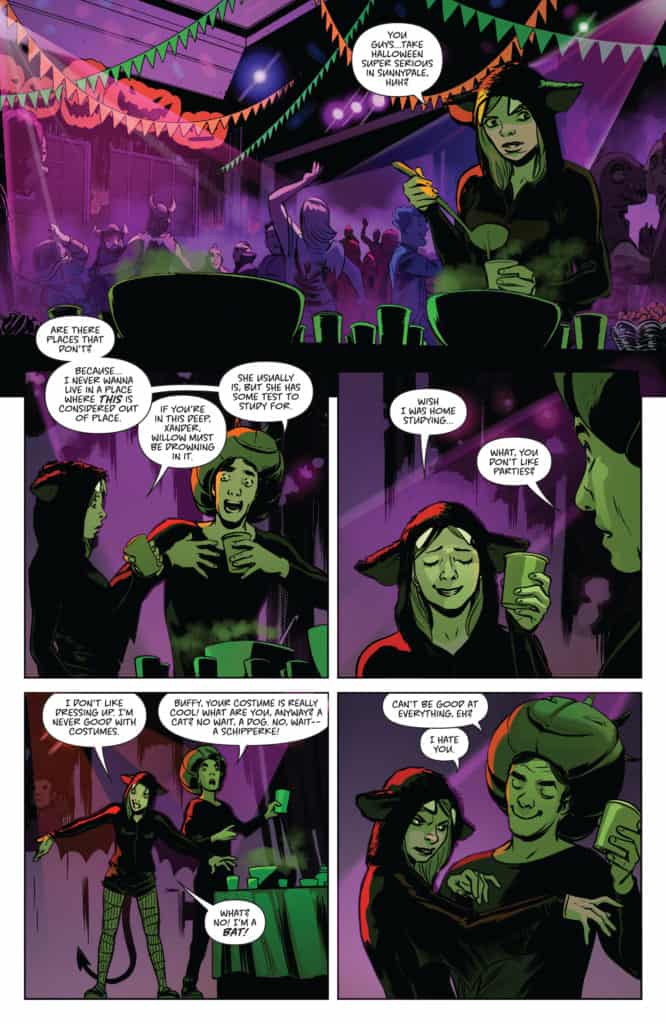 Buffy seems to have a masked admirer, though... though she isn't feeling that, either! 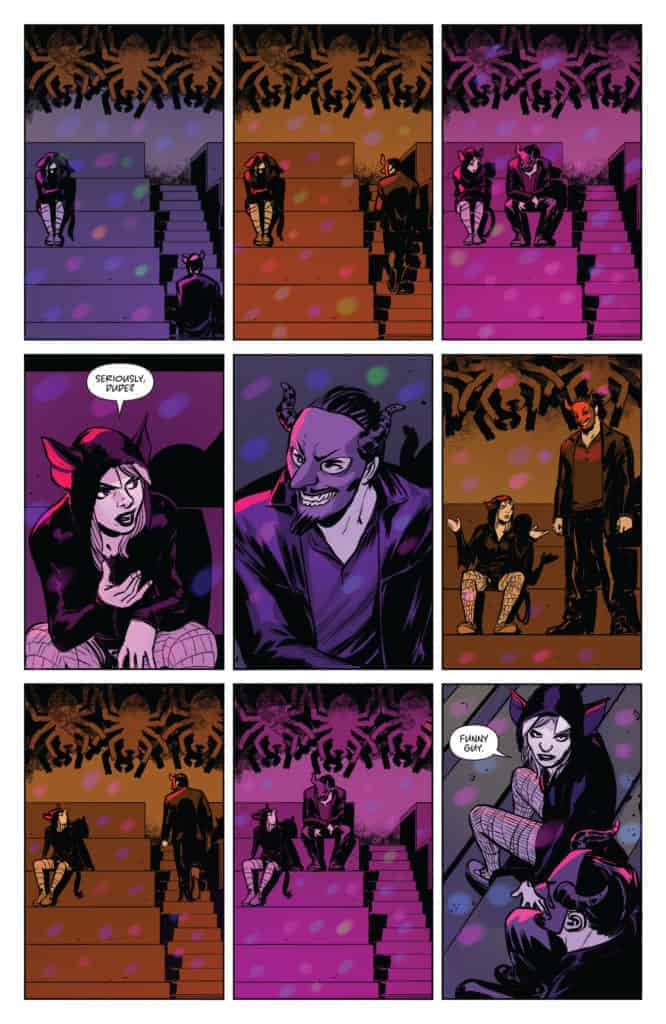 Meanwhile, though, Watcher Rupert Giles and his paramour, Jenny Calendar, are attending a high-class museum debut of a new Egyptian collection, hosted by none other than Buffy's mom Joyce! 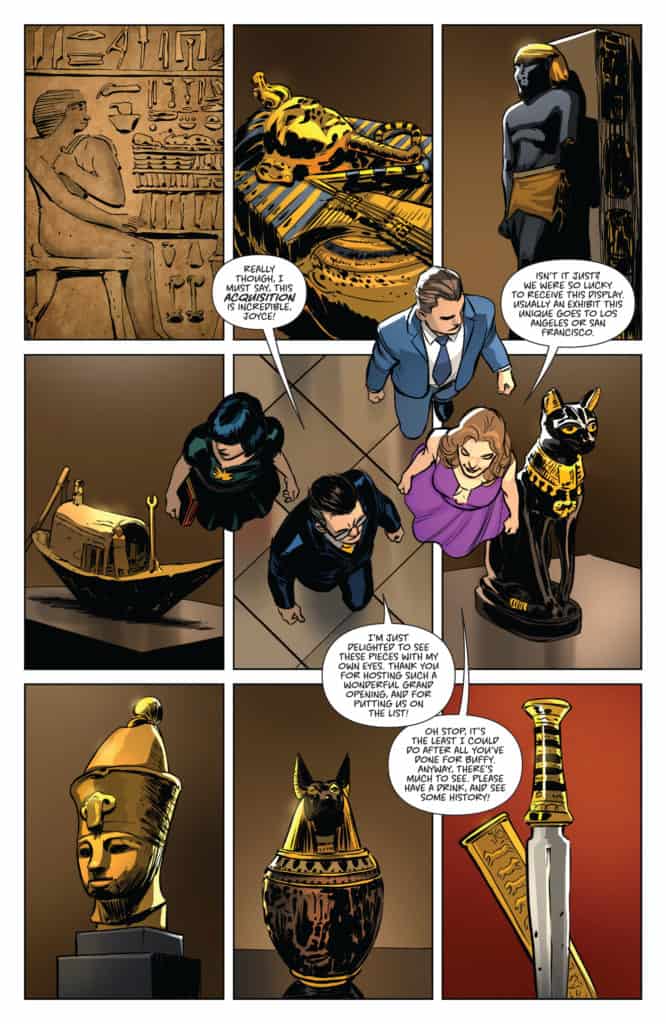 One item in particular, though, catches Giles' eye... 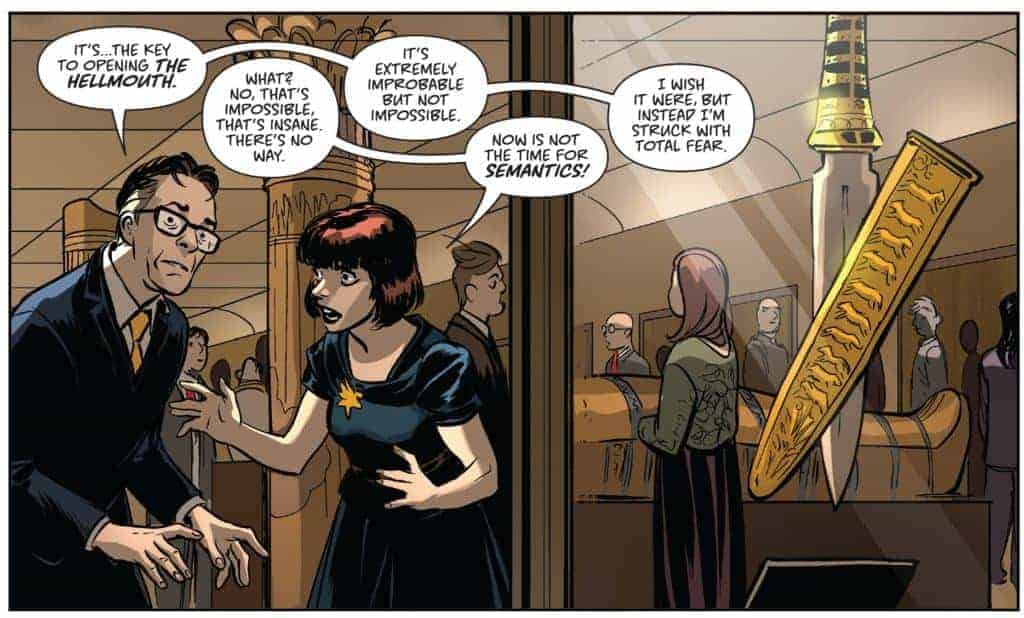 But before Giles can react further... here come the party crashers: Drusilla and Spike! 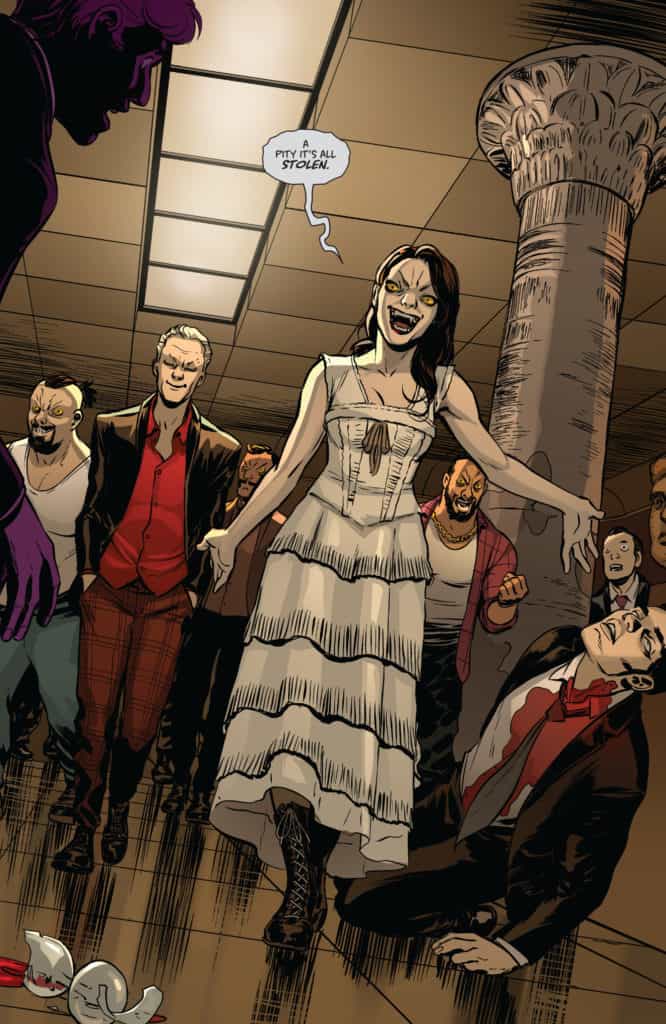 Writer Jordie Bellaire’s great Buffy remix of 2019 continues, with – at last – the first meeting of Buffy and Angel! It’s a somewhat inauspicious affair, though. They meet cute, they sit, they talk – and she doesn’t even see his face. Quite a far cry from their first meeting on the show, when Angel (wearing far too much makeup, but that’s a conversation for another time) got knocked flat on his butt after creeping on Buffy on her way to The Bronze and then in a total Remy LeBeau move, playing up the whole mystery man routine and exiting stage left without giving her any answers. This is a far more natural, down-to-earth affair, with nary a clue to be had as to what an important role each of them will play in the other’s life (presumably). Nothing is destined in this reimagining of Buffy, twenty-two years (!) after the original debuted – nor is it sacred. That’s half the fun – taking familiar concepts and turning them on their ear. So while Buffy and Angel falling madly in love is by no means certain, the hint that it could happen is more than a little buzz-worthy.

The plot itself is a bit of an odd beast, again putting a slew of familiar faces into a blender and seeing what comes out of the mix. But being odd is by no means a crime. Xander’s a kind-of vampire (don’t worry, he at least still has his soul and apparently isn’t affected by sunlight), and we get Giles, Jenny Calendar, Joyce Summers, Spike, and Drusilla all in the same room with a knife that can open the Hellmouth. I love seeing the casual interplay between the non-vampiric characters – and, as an old-school fan, seeing Giles and Jenny getting a chance to be a regular couple instead of a tragedy. There’s an odd x-factor at play with Joyce having a boyfriend (with whom she’s apparently been for awhile, meaning he isn’t a psychopathic cyborg with delusions of “Father Knows Best”). I suspect there’s more to him than meets the eye at this point – or, he could be doomed to a messy end soon. Bellaire hasn’t given readers enough here to make much more than an educated guess on this one.

I’m still lukewarm to the new dynamic between Spike and Dru. Spike is extremely submissive to Dru, an added dimension to her role as his sire. Dru, for her part, is noticeably less crazy than her TV counterpart, and doesn’t appear to have any prophetic visions. It would be unfair to detract from the story just because certain characters don’t behave like their TV predecessors, so for now I can only say that Spike and Dru are probably my biggest disappointment in this series to date simply because of how little weight their combined presence carries.

All that put together, and we still haven’t gotten to story’s main MacGuffin – the knife that opens the Hellmouth, apparently by being used to kill someone. I won’t say who (and it isn’t even evident that that someone actually died), but suffice to say the moment it’s used is jarring and impactful. After a serene start, Bellaire kicks all the dominoes over at once, creating an immediate sense of dread that doesn’t creep so much as explodes. Kudos to the author in pulling off the transition from mundane to doom so deftly. Although she has a more than capable co-conspirator in artist David Lopez. His cartoony style fits the tone of the book well – even if characters don’t necessarily look like the actors they’re supposed to resemble per se, we still know exactly who they are. It’s the feel, the vibe Lopez brings to the page that works so effectively. He brings a loopy energy to every page he composes but also brings a strong sense of design to the proceedings (see the above nine-panel grid of Giles et al. walking through the gallery).

This issue functions very much like a prologue issue in a lot of ways – the players are all in place, the mood is set, and then boom, the powder keg explodes. Jordie Bellaire’s re-imagining of Buffy Summers and her world has if absolutely nothing else been a very interesting beast so far, and if this issue is any indication – is just getting started.

Buffy #8 sets the stage and then ups the stakes in major ways this issue. If you've been on the fence about whether or not you want to check Jordie Bellaire's bold reimagining of Buffy out, this is the issue to check out. You won't be disappointed.