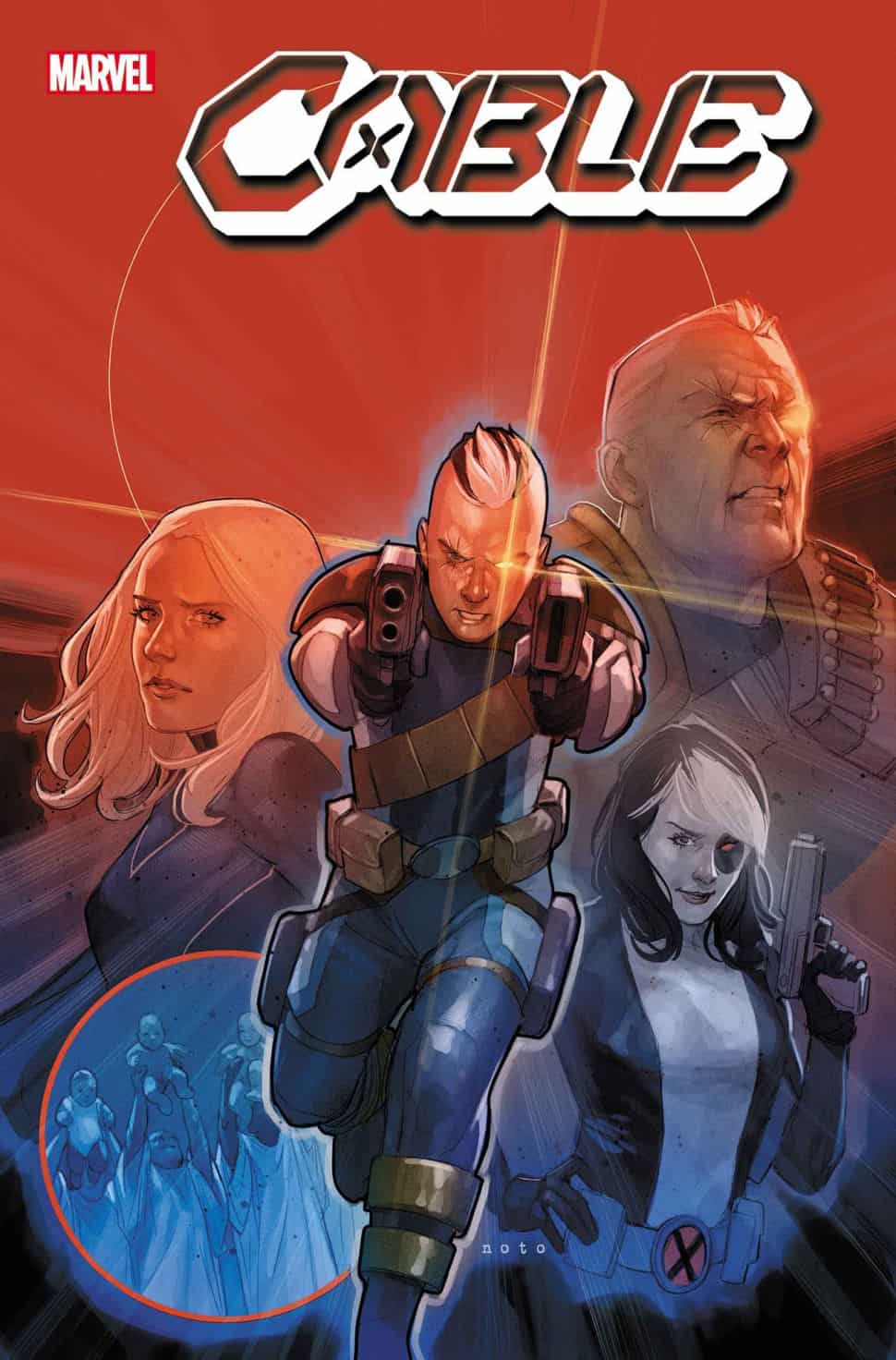 As Cable and company draw closer to the secret of the missing child, a reckoning draws ever closer.

Cable’s solo series continues its march to the end by summarizing its stakes so far: Stryfe’s clones have infiltrated a human cult and have stolen mutant babies. Stryfe has taken his never-ending war against Cable and his family to the present and this problem seems to require the older, more experienced Cable that readers might have seen end-capping issues throughout the series. Given Krakoa’s policy on duplicate mutants (with some notable exceptions), teenage Cable wants his older version to replace him on Krakoa to finally confront his nemesis.

Phil Noto excels at depicting facial expressions and body language; a skill that really elevates conversational panels. This series typically focuses on character interactions and quieter moments of life on Krakoa, and the use of Emma Frost and Cyclops in this issue continues that trend. Duggan keeps each issue’s supporting cast small, which makes every character impactful. I always love seeing Emma Frost in this comic because she is a character perfectly suited to Noto’s art and Duggan’s writing. There’s something so fascinating about Emma and Scott mentoring their children as they once again entangle themselves together. I’m comforted knowing that Summers and Frosts will always create drama.

Nathan’s relationship with his father has made both characters more endearing as readers see the impact of this new beginning on a more personal level. Old Man Cable’s return continues to loom more as a threat than an opportunity. That older character, unlike this new status-quo, is bleak, grim, and prepared for the worst. As Cyclops says, “his day is done… the future belongs to you.”

Cable and Cyclops are brought into conflict with Arakkiis wreaking havoc at a London bar. Krakoa’s neighbouring mutant island, Arakko, is a new development spinning out of X of Swords and the X-books are just now incorporating more Arakkii characters into their stories. Their war-filled history has made them prone to violence and Krakoans seemingly have to maintain peace. Arakko is filled with potential new and exciting characters, the least exciting of which are mutants to fight. Cyclops tempers this concern by approaching the situation with compassion. Noto’s art is at its strongest when depicting colourful superheroes in a grounded photo-realistic world like the London in these panels.

My biggest criticism of the issue is its data page. Data pages can be effective when they present information dynamically and uniquely usually through miming another medium such as a journal entry, newspaper article, or policy document. At their worst, data pages like the one in this issue are paragraphs on a page that dump information that could have otherwise been presented visually.

The data page hinders what is otherwise excellent worldbuilding typical of this series. The introduction of A.K. (After Krokoa) speaks a paradigm shift the Marvel world is experiencing. The upcoming Hellfire Gala continues to be teased here as Jumbo Carnation says what we all know: Cyclops would not be styled in a showstopping Gala look. Duggan’s care for these characters and the world they live in is on every page.

Duggan and Noto more than succeed in making a case for Teen Cable’s existence right as his place on Krakoa is threatened, raising the emotional stakes in time for the finale.