The Shoulder Pads are Back!  (Cable #150 Comic Review) 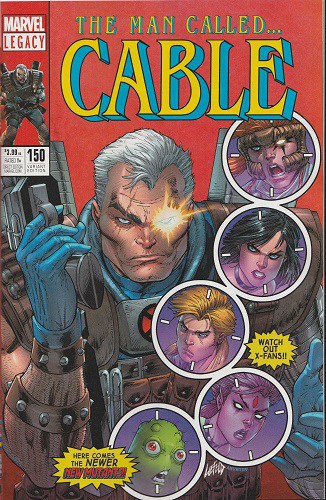 Cable is back and he’s gathering a team to hunt for a killer! Check him out as he takes us back to the 90’s (Shoulder pads, pockets and everything)!

Cable can travel through time.  Oh, and in the 90’s there was a group of immortal mutants called Externals who couldn’t die.  Selene was retconned into being one.  Cannonball was too.  But Cannonball isn’t one anymore and Selene killed most of the rest.  Still all in the 90’s.  Nothing’s been done with them since the 90’s.

At some point in the past (during the 90’s era), Cable is checking out a dead body in the morgue.  He brought along Longshot.  The body, as it turns out, belongs to Candra, an External.  Someone tore out her heart.  Longshot is there to use his psychometry (he can “talk” to objects by touching them) to try and find out what happened to her.  After all, she’s an External…she’s immortal.  Takes a special effort to kill one of her.  Cable’s natural suspect is Selene.  But before he confronts her, he needs some extra help. 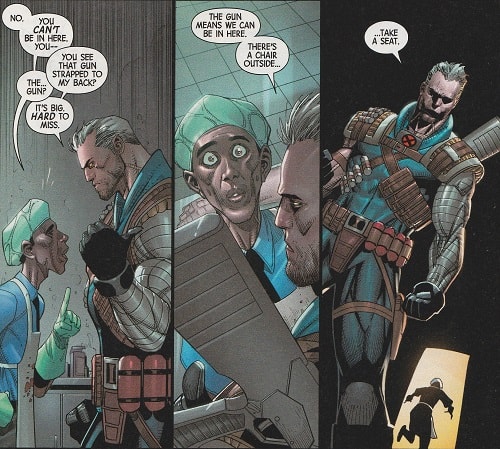 So he and Longshot head off to find some street racing in the Bronx.  There, they find who they’re looking for:  Doop.  Yes, Doop.  Driving a car.  After a brief discussion (mostly about how Doop wants to bring the car but Cable doesn’t want him to) Doop is in…without the car.

The next stop is an alley by the Hellfire Club where Shatterstar (in all of his original costume glory) is waiting for them.  The four head inside and we find out why Doop is along – for him to put up a psionic shield to keep Selene out of their heads.  Then, inside the halls, they search for their target.  But Selene is hunting them instead as the walls come alive and everything inanimate attacks the crew. 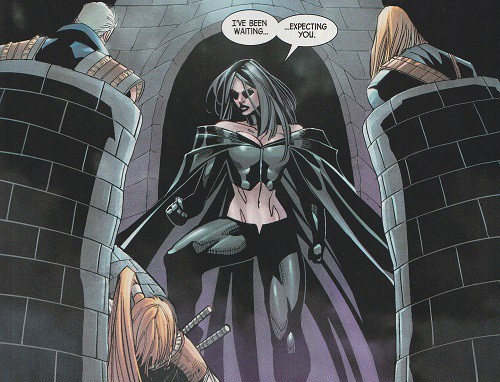 A battle ensues, with Cable and team fighting for their lives.  Finally, thanks to Longshot, they discover that Selene is not the one who killed Candra and Cable manages to get her to stand down.  But then Selene makes a startling revelation about the Externals.  One which actually surprised me so you’re gonna have to read it yourself.  I won’t spoil it.

This book had good parts and bad parts and some wtf parts.  But overall, it was a very solid entry in the Cable legacy (haha…see what I did there?).  I really enjoyed the artist and I didn’t think I would based on the cover, but every bit of this book is well drawn.  People aren’t overly muscled but they’re drawn in pretty good detail.  Selene, while still in one of her later getups, isn’t overly sexualized, which is nice (I always thought the running around in lingerie was a bit silly).

We’re only introduced to part of Cable’s team here.  Based on the cover, we still know that X-23, Blink, and Armor are going to show up.  And if it’s anything like this issue, we can expect them to be plucked from some point in the past.  After all, Shatterstar is still in his white uniform…even though we know this happened after Selene killed the Externals…and that happened well after the X-Cutioner’s song…and after the X-Cutioner’s Song story, Shatterstar changed his uniform.  Ugh…there are times when being a comic geek is a curse. 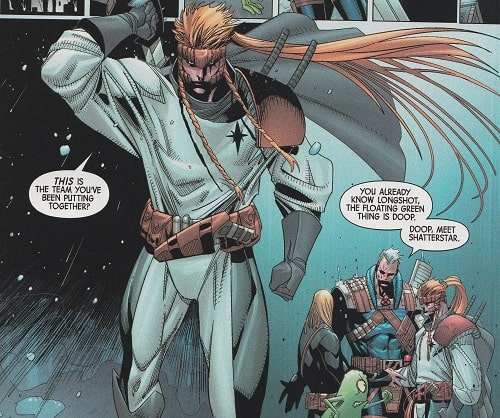 The book uses time travel (because:  Cable) to allow it to explore past plot threads with a new twist.  The Externals were killed off in the 90’s, almost a forgotten race of mutants (and, quite frankly, had the typical 90’s problems).  We get to see a past version of Longshot, a past version of Shatterstar, a version of Doop before he was even part of X-Statix, and even 90’S CABLE SHOULDER PADS AND POCKETS.  But that’s the great thing about Cable.  He can do all this.  So maybe Brisson will use it to have Cable traipsing through his own past…our past, even.

The characters, of course, are supporting Cable (it IS his book, after all) so there’s not much to them.  Shatterstar is silent and brooding but that’s the 90’s Shatterstar.  Longshot…well Longshot seems a bit more of a plot device.  And Doop?  Well, we’ll get to Doop in a minute.  But my point is, this isn’t a team book so don’t read it hoping to get some great development from your favorite characters.  But I still loved seeing them.  And with the Externals being brought to the surface once more, I really hope we’ll see Cannonball.

But Doop…oh, why is Doop in here?  I get that some people love him.  I’m not one of those.  But even those that love him admit that he is definitely a silly character and he just doesn’t fit the tone of this book.  I don’t like that he’s in here and he definitely knocks a point off the rating.

Final Thoughts:  It’s a good read.  Not a perfect book by a longshot (yes, that was on purpose) but enjoyable and shattering (on purpose too) the previous, boring arc.  Brisson has shown that he can write an engaging storyline while Malin is reminiscent of Mark Brooks (and that’s a good thing).  I’m definitely looking forward to where this one is going!