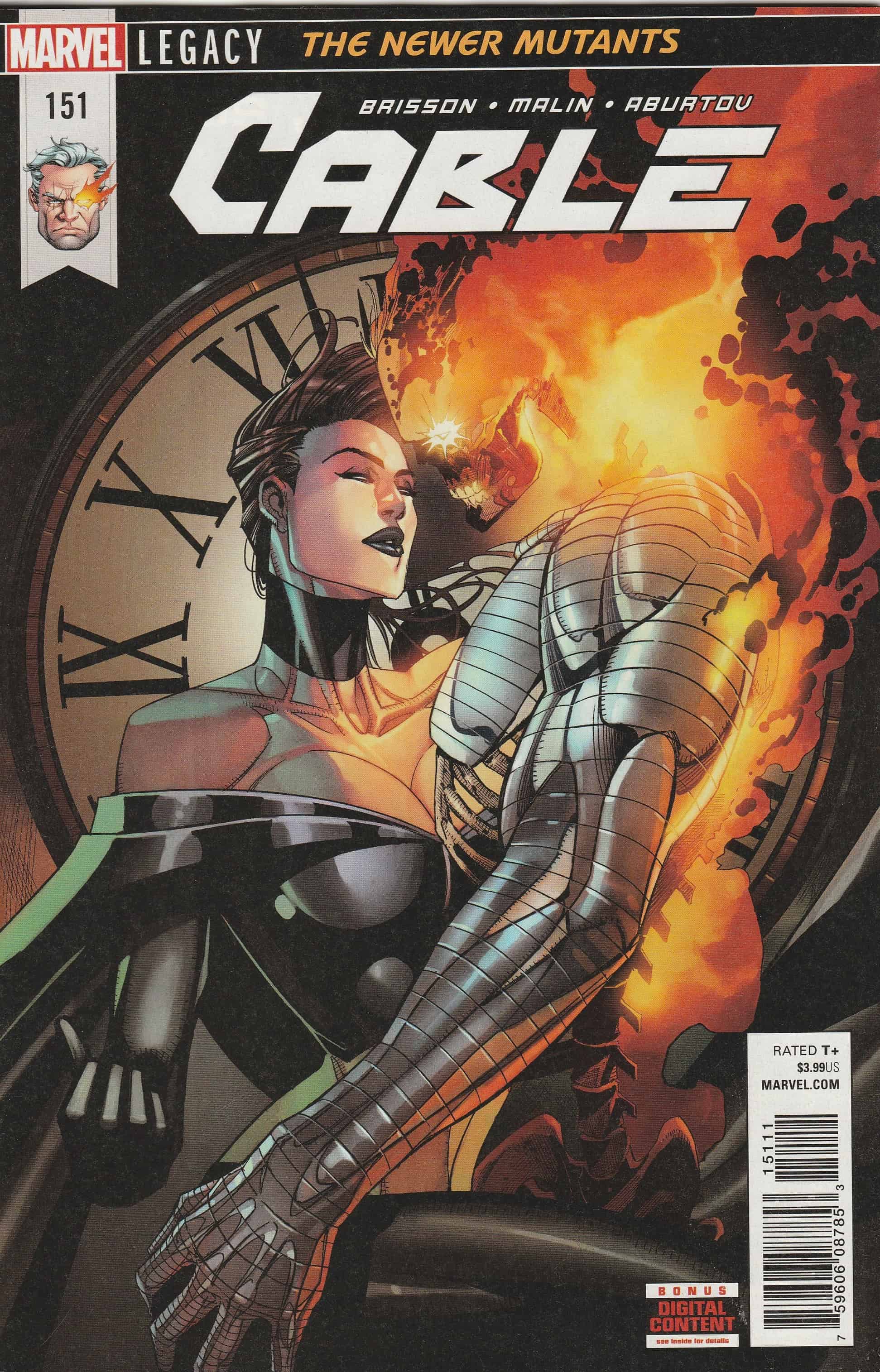 Cable and company track down two more Externals but Selene’s group is also seeking them.  And they’re also competing with the man who is killing Externals.  And everybody wants to kill each other.  This can’t end well.

Someone is killing the Externals (remember them from the 90’s?) starting with Candra, and since that’s supposed to be impossible, Cable has traveled from the future to solve the mystery.  He’s managed to get together Doop, Longshot, and Shatterstar.  Cable suspected Selene but when he catches up with her, not only does he find out it’s not Selene, but the rest of the Externals aren’t as dead as he thought!

Instead of trying to fight the Externals, Cable leads his team back to his safehouse and begins searching for the Externals that weren’t siding with Selene:  Saul, Gideon, and Burke.  But before he takes anybody else on, he needs reinforcements.

Meanwhile, Selene is getting reinforcements of her own.  She leads the Externals onto a boat out to the ocean and stops.  She seems to touch the air and it shimmers and she pulls a shadowy individual through the open air onto the deck of the boat.  The next day, Cable visits the young mutant Armor.  She recognizes him but only by reputation and he knows her from the future.  In Central Park, X-23 (before she was Wolverine) is tearing up some bad guys (who knows who they are, it’s not important) when Shatterstar shows up to get her help, having been sent by Cable.  She doesn’t know who Cable is but that won’t stop her from killing bad things. 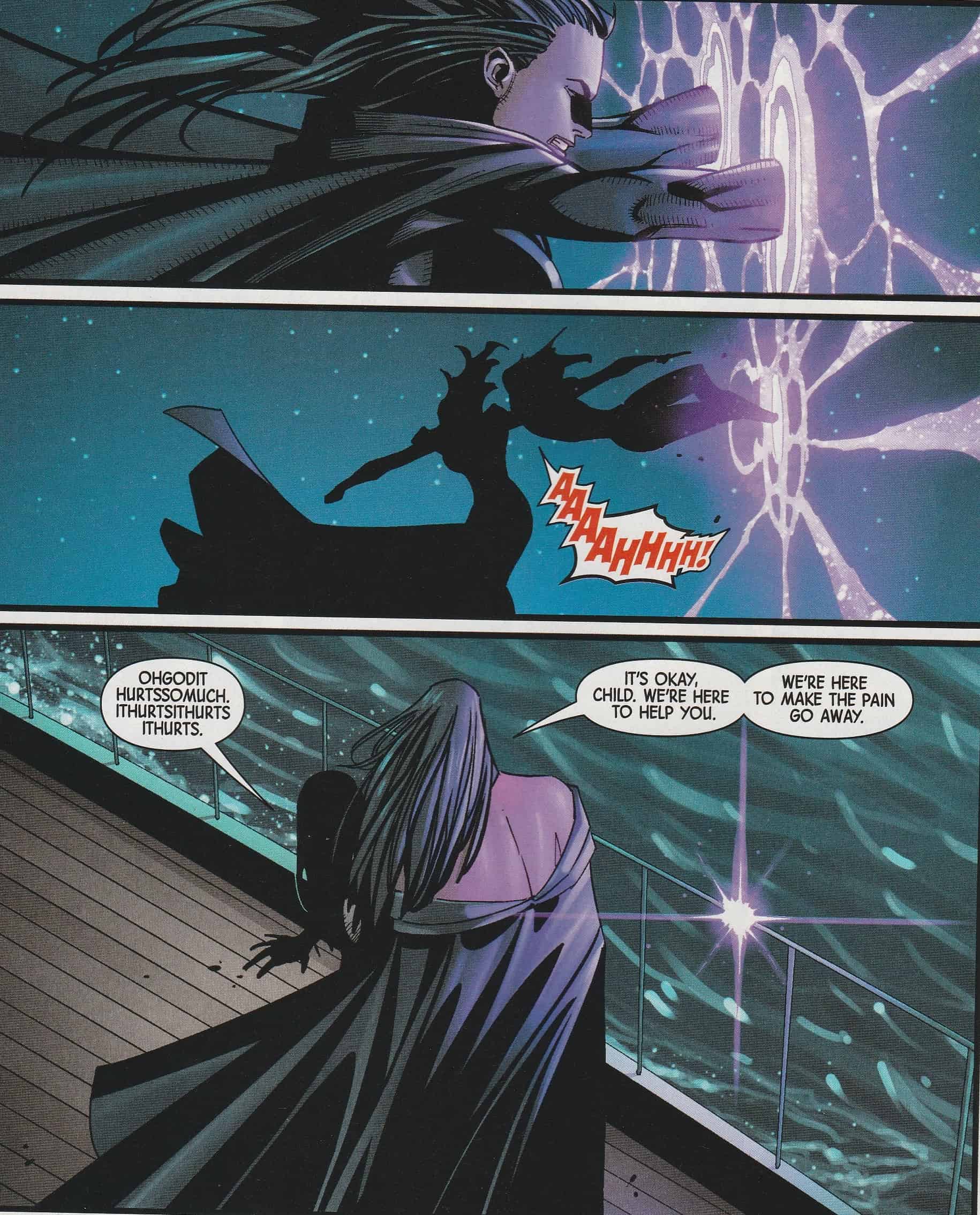 In Washington State, Cable, Doop, and Armor have tracked down an External who can see the future:  Burke.  He invites them into his cabin for some tea.  There, he talks around in circles.  He obviously knows who is killing the Externals but he’s not so quick to divulge the information.  Living forever isn’t all it’s cracked up to be.  When the trio leaves, we find out why he didn’t give them much:  the killer is there and gives Burke his wish.

In Mongolia, Longshot, X-23, and Shatterstar approach a temple with dead monks surrounding it.  Inside, they find Cruul and Absolom.  X-23 and Shatterstar do what they do best, and what they do best isn’t very nice (am I allowed to use that here without Wolverine?) while Longshot heads deeper into the temple.  Inside, he finds Saul, his heart ripped out.  Standing over his body are Selene, Nicodemus, and…Blink? 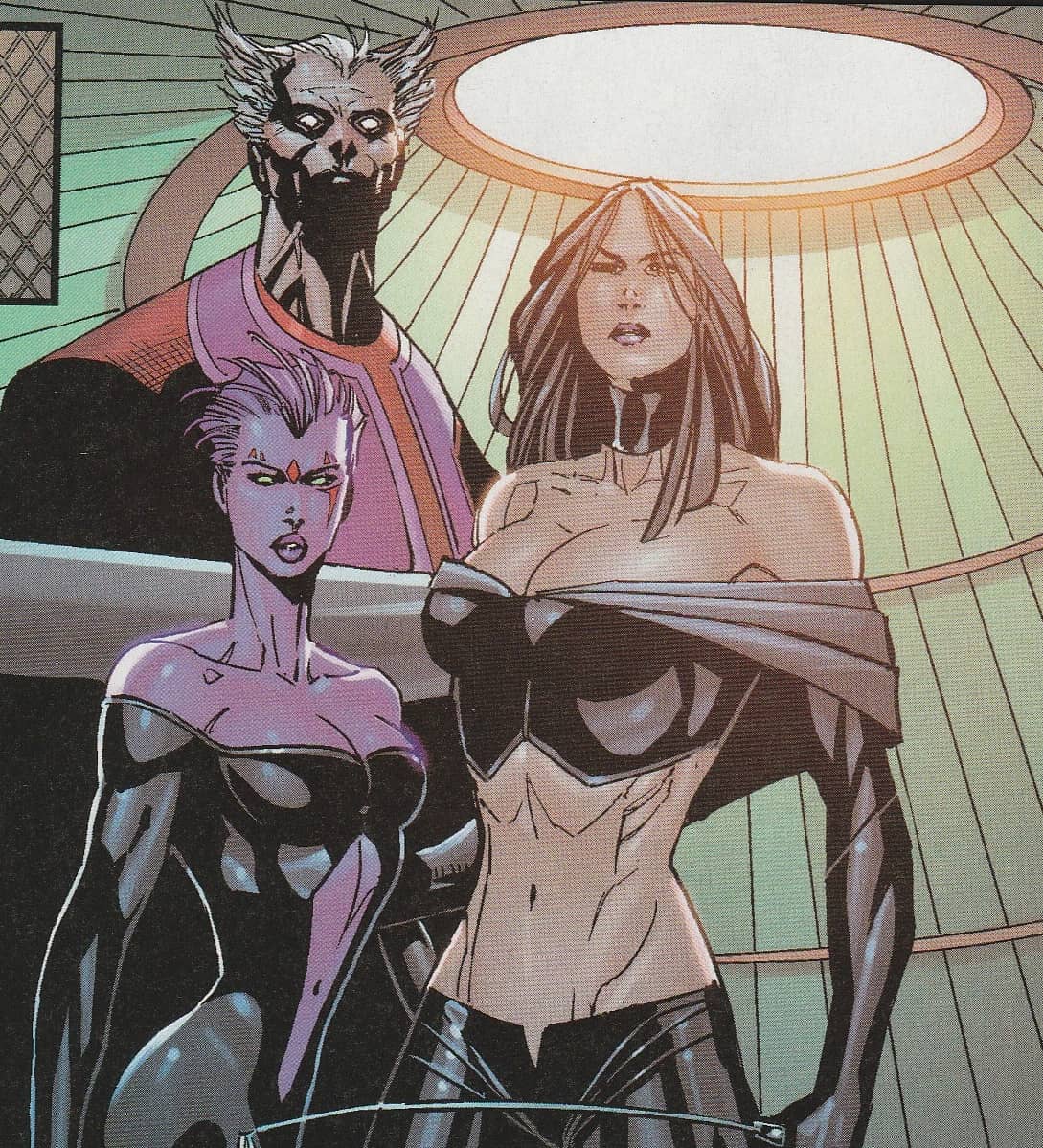 Ultimately, if you look too deep into this issue, it falls apart.  The art is good if you like the style.  Everybody is lean, but the story is face paced, the panels used well, and the art is all around enjoyable (of course if you hated the art in the last issue, you’ll hate it here since nothing’s changed).

But it’s the story that creates a problem.  And it really only creates a problem if you’re a continuity nerd…like me.  The problem is that it’s really hard to tell if the mutants Cable gathers are from different points in time or from the same month.  Shatterstar is wearing an outfit he got rid of years ago (remember, he changed it at the end of the X-Cutioner’s Song story).  X-23 has no idea who Cable or Shatterstar are and in fact is in her original black sports-bra-like top from when she first showed up.  Armor doesn’t seem to know who Cable is, only by reputation (and don’t get me started on her outfit here considering she normally dresses more modestly…it’s not a problem except that it seems out of character for her).  Blink had yet to be rescued by Selene in the events leading up to Necrosha, so we know it’s sometime before that.  However, Longshot remembers her from the Exiles (never mind that it’s a different Blink).  It seems really haphazardly done and I think it would have served the story better if we’d gotten explanations that Cable pulled them all from different points in the timeline.

And on that note, my only other complaint about the issue is that the team seems completely random.  There doesn’t seem to be a good reason for Cable to have gathered any of them except Shatterstar and Longshot.  Doop still seems pointless…  X-23 is great and all but seems a bit redundant.  And Armor…I mean sure, I get that some really like her, but she seems a really odd choice for this team.  We (the reader) have never seen him interact with her…so why in the world would he pick a younger version of her???

But the issue isn’t all bad.  In fact, it’s still quite enjoyable.  Burke’s conversation about the downsides to immortality is an intriguing point of view, especially his desire to just end it all (on that note, if you haven’t yet, check out our article on suicide).  Most people consider living forever a gift, but when you watch all your friends and loved ones die around you, I imagine it could get quite lonely.

The interaction between Shatterstar and X-23 is great!  Remember, X-23 is still barely more than a mindless killing machine at this point and to see Shatterstar develop a “bond” (really he just exclaims that he likes her spirit after she just barges in without a plan) with her is funny.  Although we do have to ignore that Shatterstar says warriors are trained not bred considering that throughout all of the 90’s, his big shtick was that he was bred to be the perfect warrior… 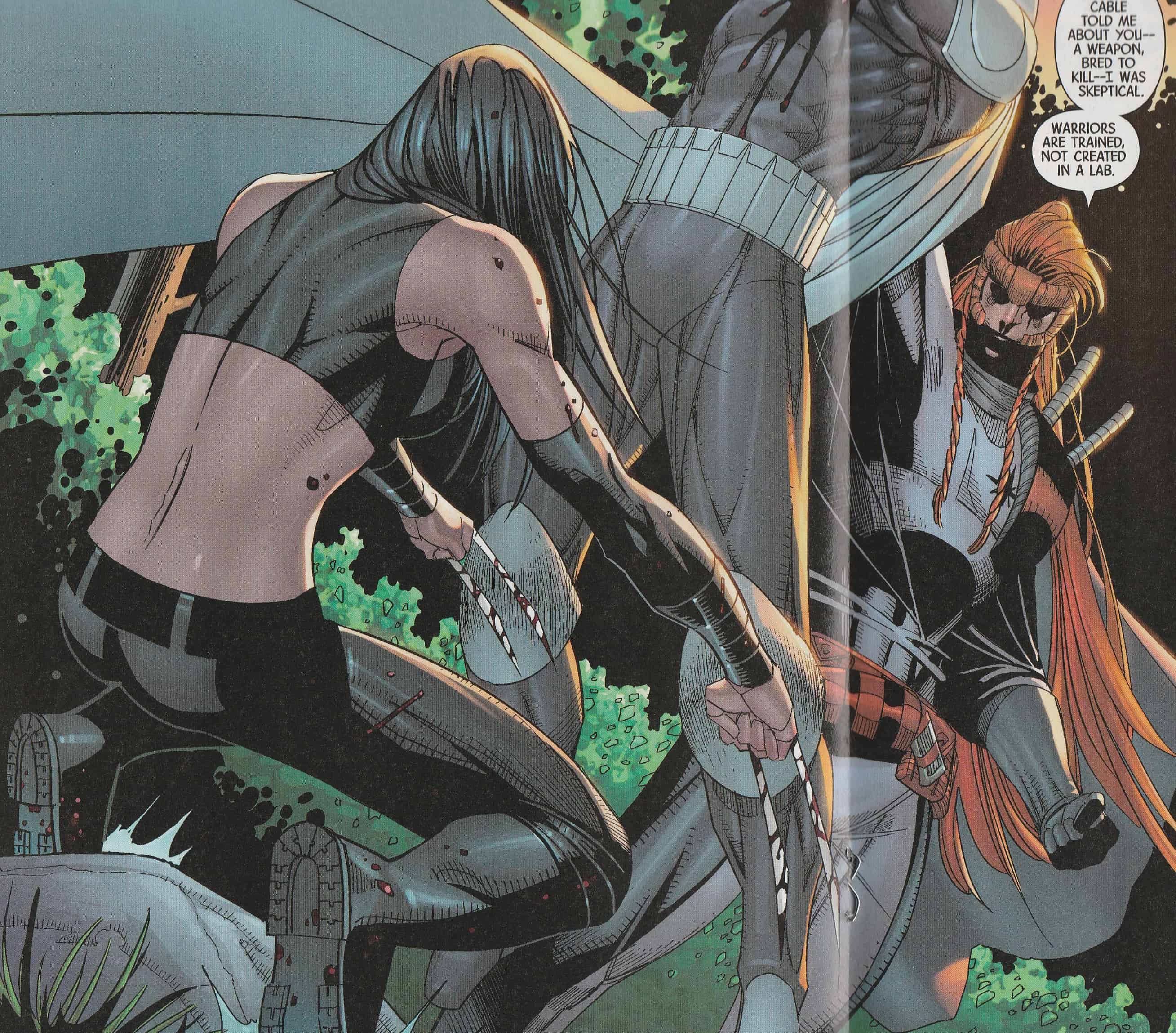 And Blink…I love me some Blink any way I can get her.  I kind of wish it’d have been more of a surprise…the cover of the last issue told us Blink would be here.  But it was still great seeing that moment of Selene going to the spot in the ocean where Blink vanished many years ago, reminiscent of her retrieval of Blink in Necrosha.  Of course, if you haven’t ever read Necrosha, you might have no idea what I’m talking about (and if you never have, go check it out).

Overall, Brisson has given us a decent story with some great visuals from Malin but I’m a little frustrated with trying to fit this all into the X-Men mythos.  Maybe I’m trying too hard and should just enjoy it for what it is.  But I have a feeling I’m not alone.

Final Thoughts:  Brisson is clearly a fan of X-Men comics as he draws from the last three decades of X-Men and X-Force comics for his story, but it still feels unnatural and forced.  It’s like taking a trip down memory lane but just being given snippets that make almost no sense out of context.  It’s fun and all, but it’s missing that real “wow” factor.