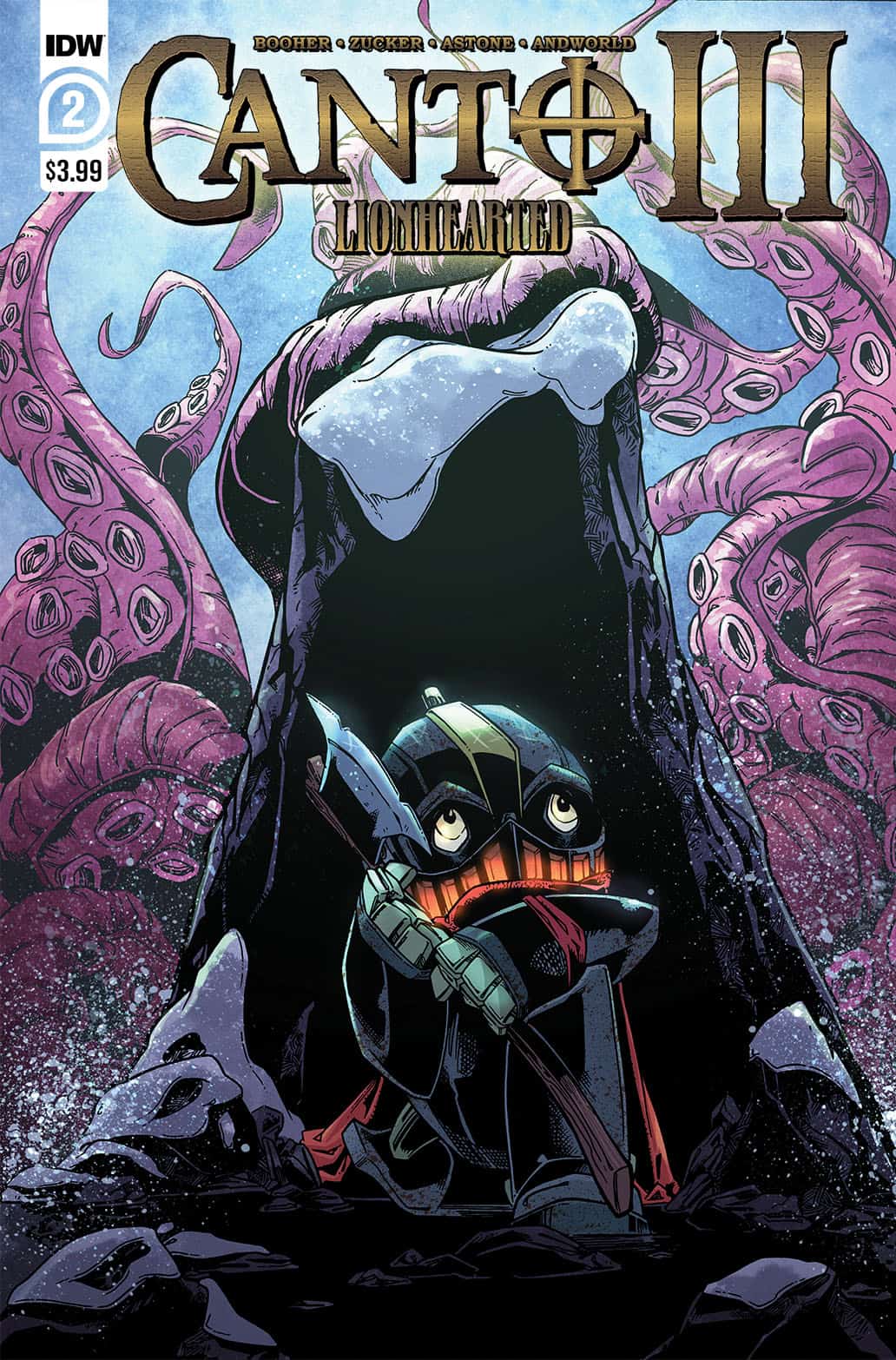 Canto has set off to convince his peoples former slavers to join the battle against the Shrouded Man. But, finding were they have fled to will be a mission of itself. Luckily Canto's friend Aulaura is here to help. They know one spot where they might find the information needed, the Hermits lair protected by the mechanical Kraken!

David M. Booher making me eat my own words in Canto III: Lionhearted #2. My only real “complaint” with the Canto series has been that the other characters are not that developed. Which is fine as the focus should be on Canto. But, other characters just felt they lacked depth. But, when writing that I think I forgot about Aulaura. We met her way back in the first volume of Canto and she has become an incredible character in her own right. Booher brings her to the forefront again in issue #2 here and it is fantastic.

Aulaura has a more “real world” hard edged sensibility compared to Canto’s ever flowing hopefulness. Booher plays the two perfectly off of each other.  But, it is also delightful to see how both of the characters have grown since their first meeting. Their friendship has blossomed and they know each other well now. Booher adds in the familiarity to the dialogue tremendously well.

As for the story itself Canto III: Lionhearted #2 is perfect for the second issue in this six issue arc. It sets up a nice ongoing narrative for the adventure and starts putting a lot of different pieces into play. We get Canto back on another adventure with some nice twist and turns to it. The idea of Canto attempting to Help his former slavers and having them help against the Shrouded Man continues to be a wonderful plot point. As even with as hopeful and optimistic as Canto is me as a reader finds myself siding with Aulaura when she says “I hope your confidence in them is well-placed, Canto. After all, they bowed to the Shrouded Man once before.”

There is a wonderful sense of un-easiness with this volume of Canto. As we learn more about the Shrouded Man and as Canto goes into another dangerous territory; the outcome does not seem like it will be what Canto is expecting or what we are familiar with. 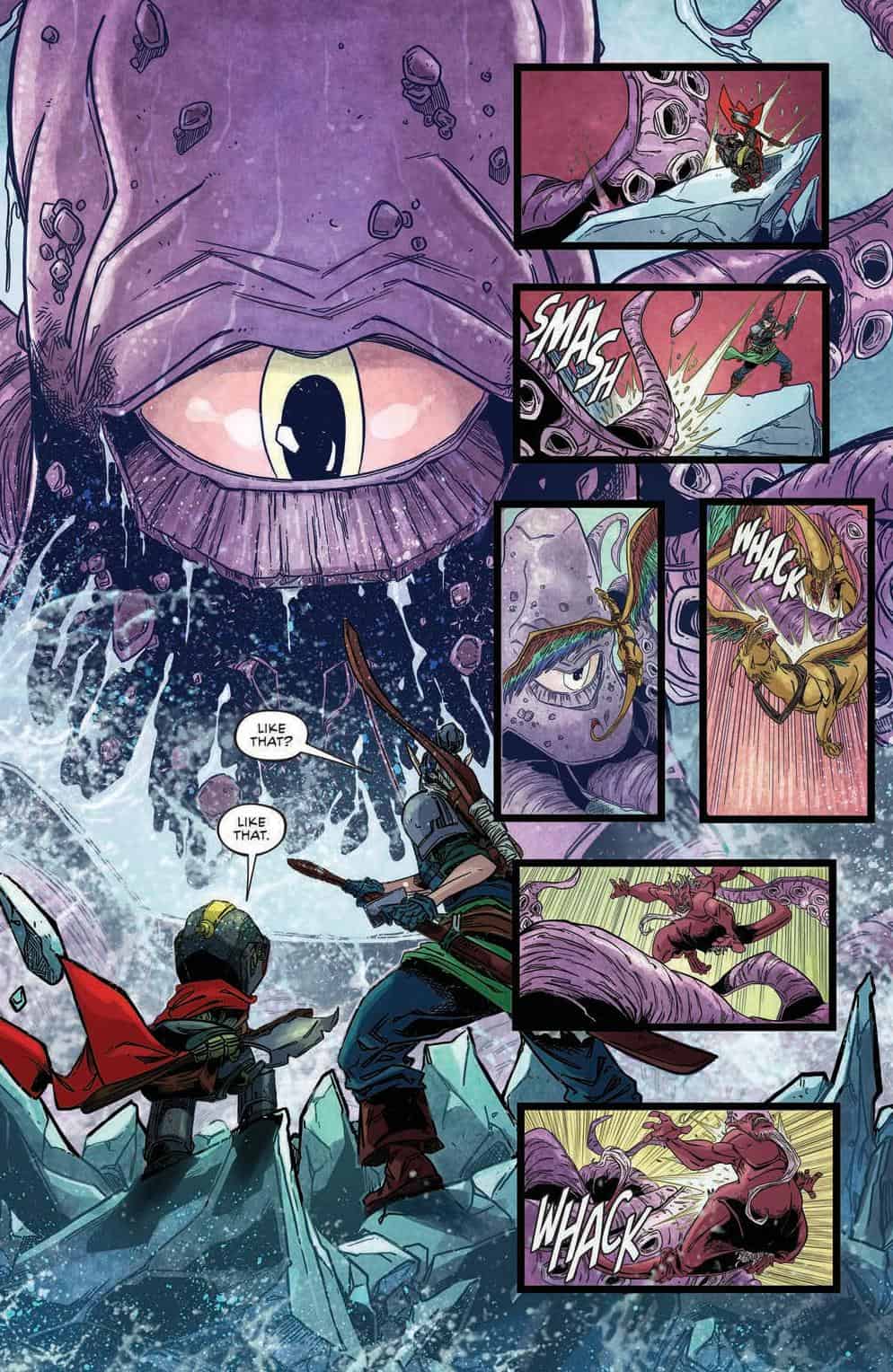 Drew Zucker and Vittorio Astone shine once again in Canto III: Lionhearted #2. Fantastic opening scene with the Mechanical Kraken and the Hermits lair. Zucker captures the action superbly well, with flow and elegance in his sequences. Zucker captures the size and scope of the battle against the giant monster sensationally. Fantastic use of “camera angles” and perspective to capture the fight.

Vittorio Astone has always been a delight on colors throughout Canto. Always capturing the all-ages yet mature tone of the series. I noticed that Astone has added what looks like a little rust on Canto’s tin body. I may have missed it previously, but it is a wonderful little detail that adds a ton to the visual story telling with the time passing through the series showing Canto’s age possibly.

I loved the scenes inside the Hermits lair in Canto III: Lionhearted #2. One for more spoilery details that I won’t get into, but Zucker captures the junky/claustrophobic feel of it perfectly. It feels tight and cramped with everything packed inside of it. Zucker also captures the “haunting” presence of the shrouded man marvelously well. Every time he comes on the page I get that great sense of dread. He also, has that classic 80’s cartoon villain feel. With his head constantly being covered and his wildly sinister motives.

Canto III: Lionhearted #2 has been one of my favorite single issues of the series so far. That is coming from guy that has enjoyed every issue of this series so far. Obviously, not a good jumping on point, but if you have been following along with Canto's adventures this builds upon that story amazingly well. Some solid action, some lovely plot points built upon and the heart of Canto we have all come to love. Three volumes in and I still find myself captured by the story of this little tin man.