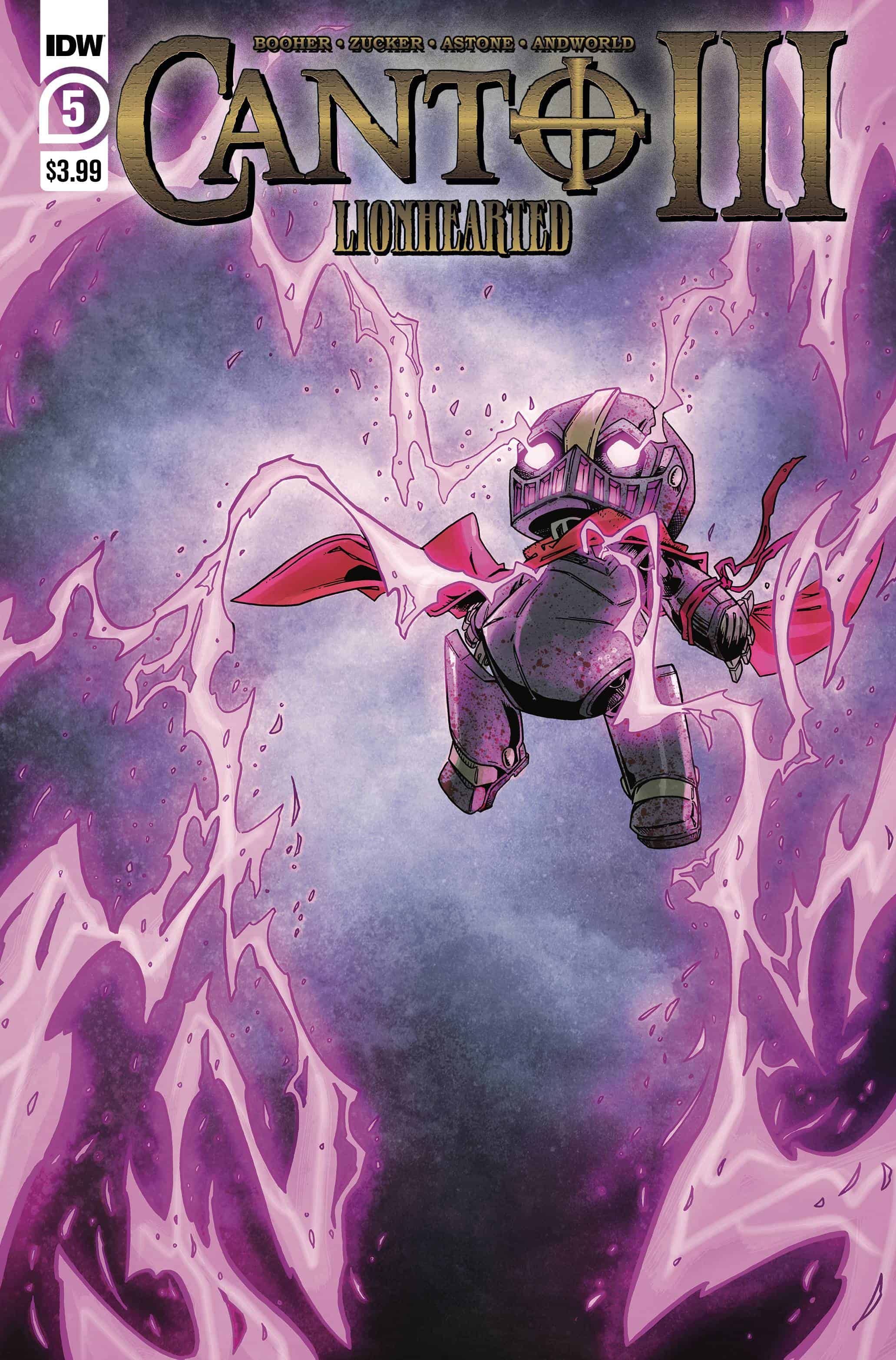 The Big battle is finally here! Canto has his army ready to stand against the forces of the Shrouded Man, but will it be enough. As the battle rages on Canto must fight an inner struggle to turn the tide of the fight!

Booher starts off the battle of Frysta with a bang! This is the start of what the third installment of Canto has been leading up to. Canto has finally convinced the Vikus to fight with him against the Shrouded Man’s army, but even with their help it might not be enough. The Shrouded Man’s Fury’s are turning the tide against Canto’s army, can the little tin man that could use his words against the Fury’s as well.

Booher does some delightful dramatic story telling in this penultimate issue of Canto III: Lionhearted. He weaves the story in in out of the battle immaculately well, letting the start of the epic battle flow, but not losing sight of the story being told. Canto’s internal battle with the Fury’s is a wonderful story that has been waiting to be told and Booher delivers yet another tragic tale that led to the Shrouded Man’s power.

Booher continues to do an excellent job with pacing in Canto III: Lionhearted #5. He switches from bold action to dramatics perfectly, switching up the story leaving the reading wanting more while continuing to guide us along. The thing I love most about this second to last issue is that we get a solid cliffhanger but with Booher and this Canto series you do not know exactly what surprises he has? Even though it is a series geared toward more all ages Booher pulls no punches in the story telling dramatics. He is not afraid to kill off a character or some epic character changing happenings in there. That makes the cliff hanger and the dramatics of the battle even more intense. 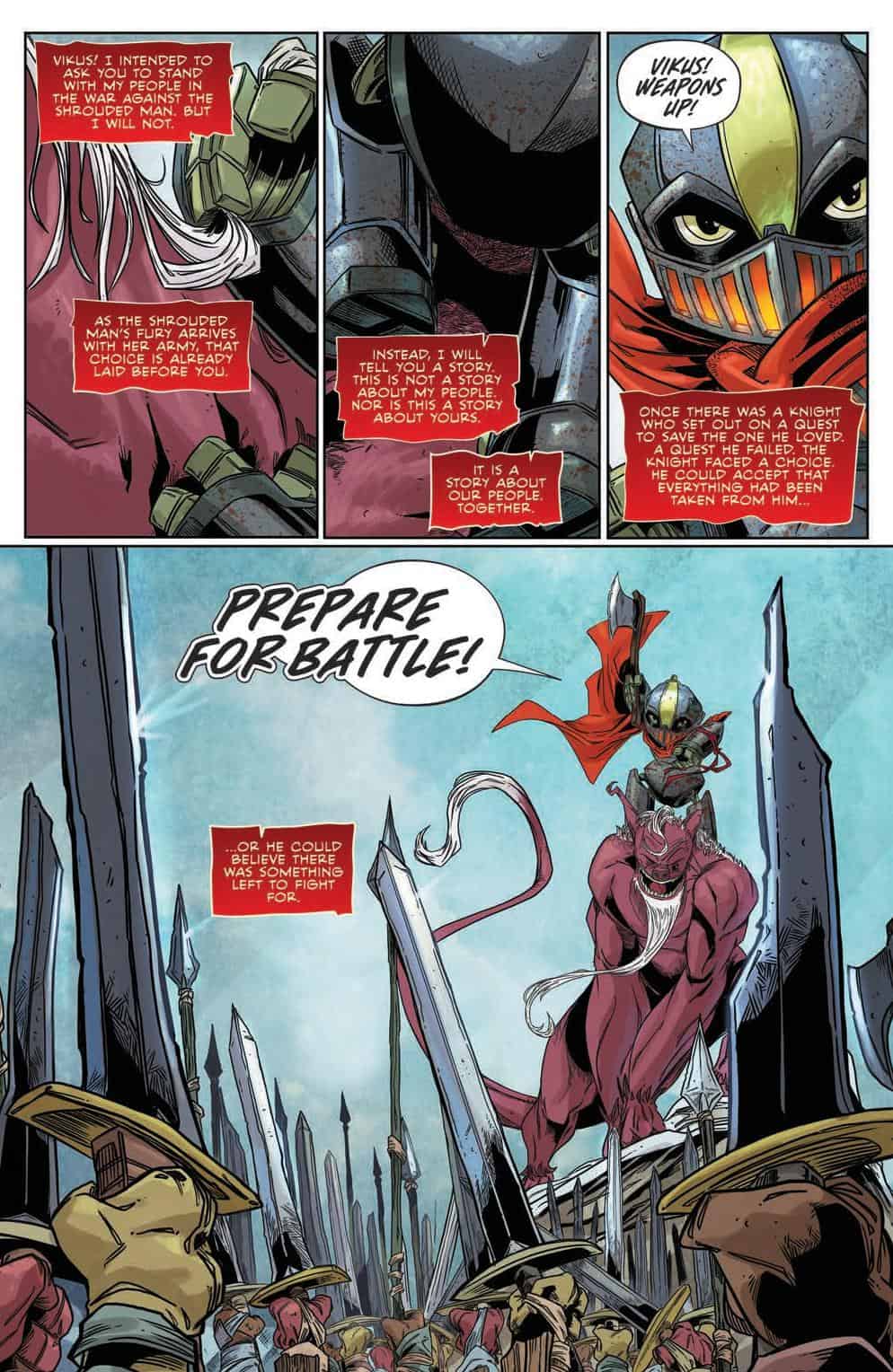 I mean I am not sure what else I can say about Drew Zuckers art, I have reviewed just about every issue of Canto and dude just straight up kills it every single time. Tremendous opening sequence of Canto standing rallying his army. Zucker sets up the angle and pulls in the dramatics of the moment in superb visual fashion. He balances wildness of this huge battle elegantly well against Canto’s inner battle with the Fury.

I am super excited to see Zucker tackle more of this big battle in the next issue. His dynamic art style demands that we see more of it in the next issue! I hope we get to see some bigger splash pages from him.

Vittorio Astone in the same breath continues to do beautifully stunning work on colors. From the vibrancy of the battlefield to the faded-out flashbacks, Astone matches the feel of the series perfectly. There are a few different lettering styles used in Canto III: Lionhearted #5 with AndWorld Design nailing every aspect of it.

Once again, this team is bringing the visuals of the story to life in an immaculate way. The visuals encapsulate the story and from character design to the overall world design bring you into the world of Canto.

I have said this a lot but, Canto is more of one of those all-ages series that is going to make you tear up or get some dust in your eyes. That is what I continue to love about it, Canto III is a fantastic story, and it is charming, funny and action packed something all-ages can enjoy but that is also not letting that aspect get in the way of the story telling. So, what happens in the final issue is anybody’s guess, and I do not know if I am prepared to read it!