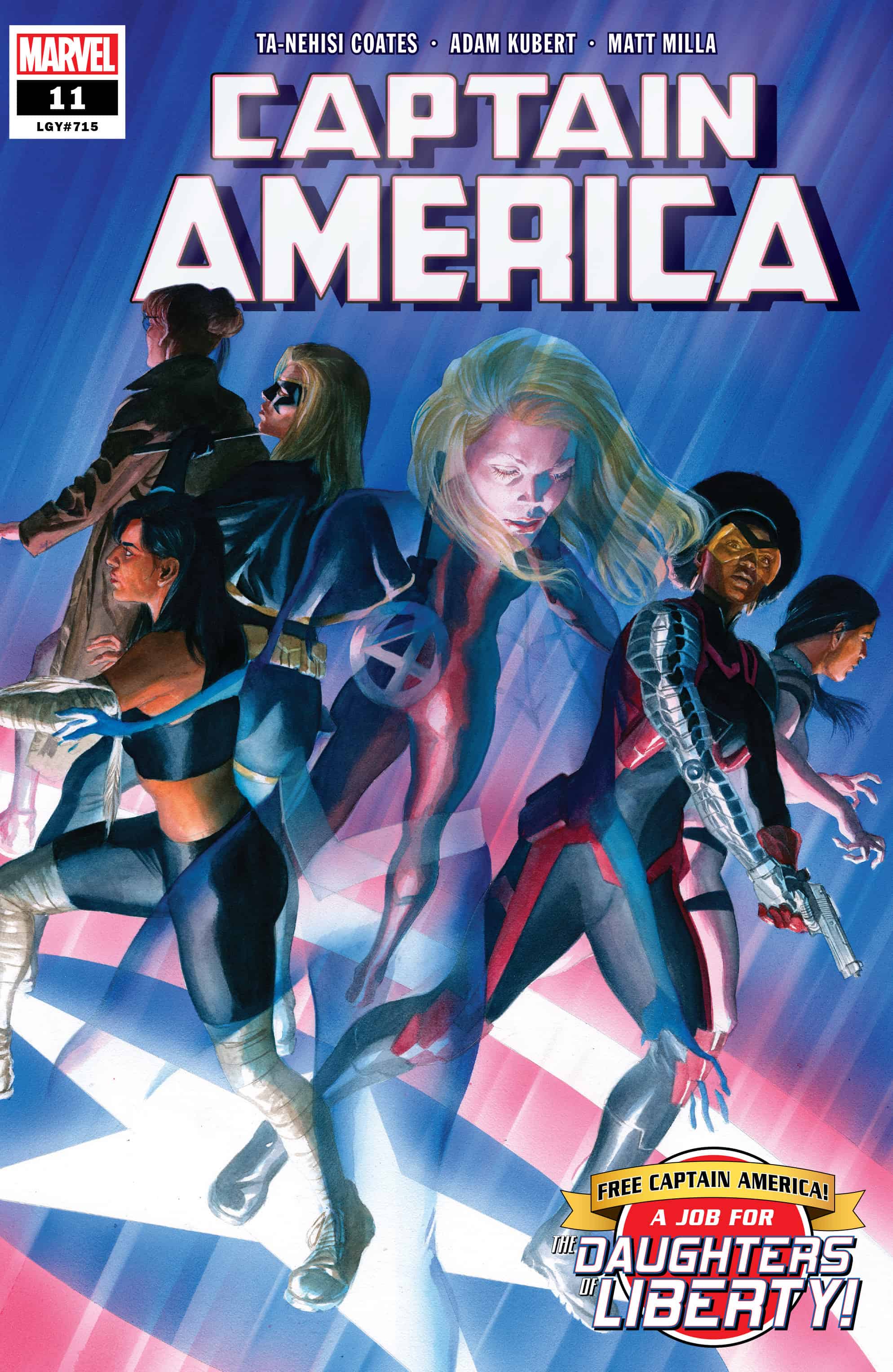 While Cap leads his army of criminals in a riot from inside the prison, the Daughters of Liberty continue their multi-leveled operations both inside and out in the efforts to free Steve and clear his name. 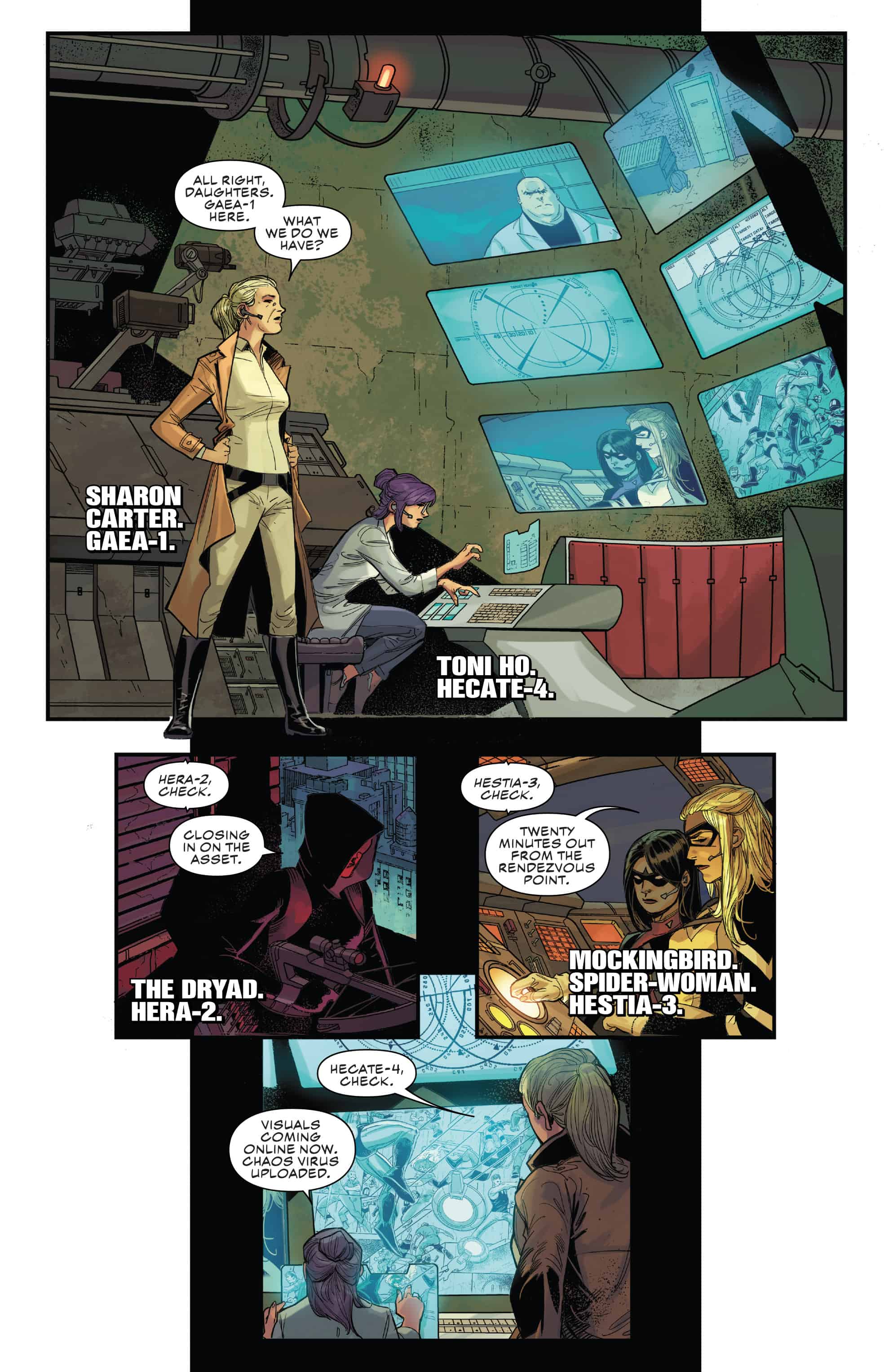 Fighting through Guardsmen and Americops, Steve and the rest of his ragtag army make their way to the sub-base underneath the prison only to see Steve betrayed by the criminals and left for dead. Lucky for his, the various operations by the Daughters have fared better than his own, yielding the capture of Strucker and the successful extraction of Steve, although The Foreigner was lost when Crossbones and Sinn ambushed him and The Dryad's fight. 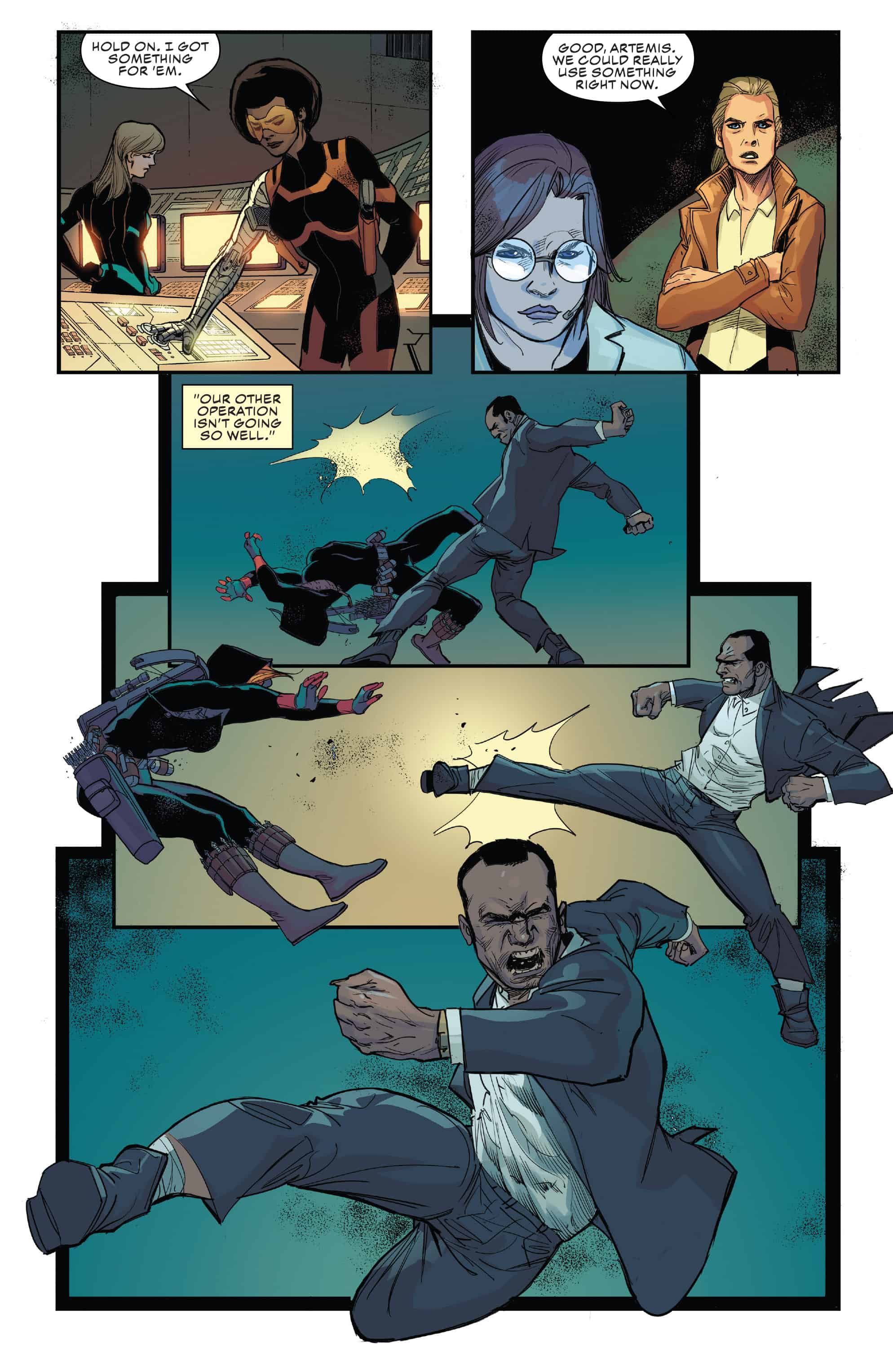 This issue suffers from the necessity to move the plot along in service to a six-issue arc. The goal here is clear from the outset– Steve must be out of prison by the issue’s end in order to move into the final chapter. That isn’t to say it wasn’t a well-written issue, but nothing extraordinary as I’ve come to expect during Coates’ tenure on the book. All that said, though, there were a few curious moments to explore. 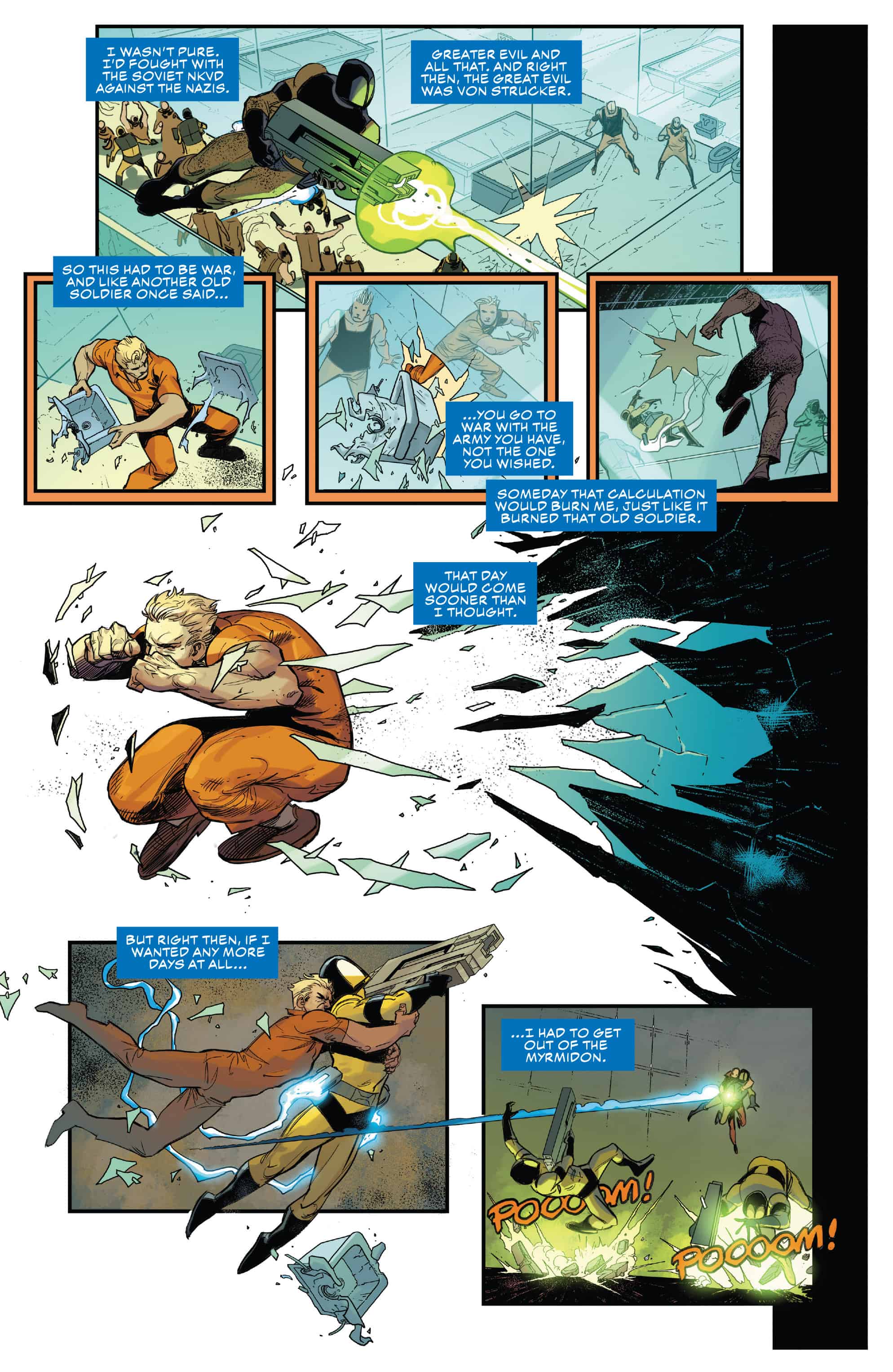 The interior monologue/retrospective narration from Steve has been the highlight of this series thus far. Here, we see Steve quoting Donald Rumsfeld of all people, an odd choice in inspiration yet a perfectly apt quotation. There is a lot of ground work being laid for how Steve views himself that seems certain to impact the book moving forward as his public perception is decimated. It is worth pointing out here that Kubert’s layouts once again manage to capture the tone and pace of the story exceptionally. I tend to knock an artist for failing to deliver backgrounds but in this case it feels appropriate as we navigate the prison but also Steve’s psyche. There is a starkness Kubert achieves here that feels potent. The actual execution of the pencils does have a bit of a rushed feeling in this particular issue, though, particularly in relation to faces and figures. 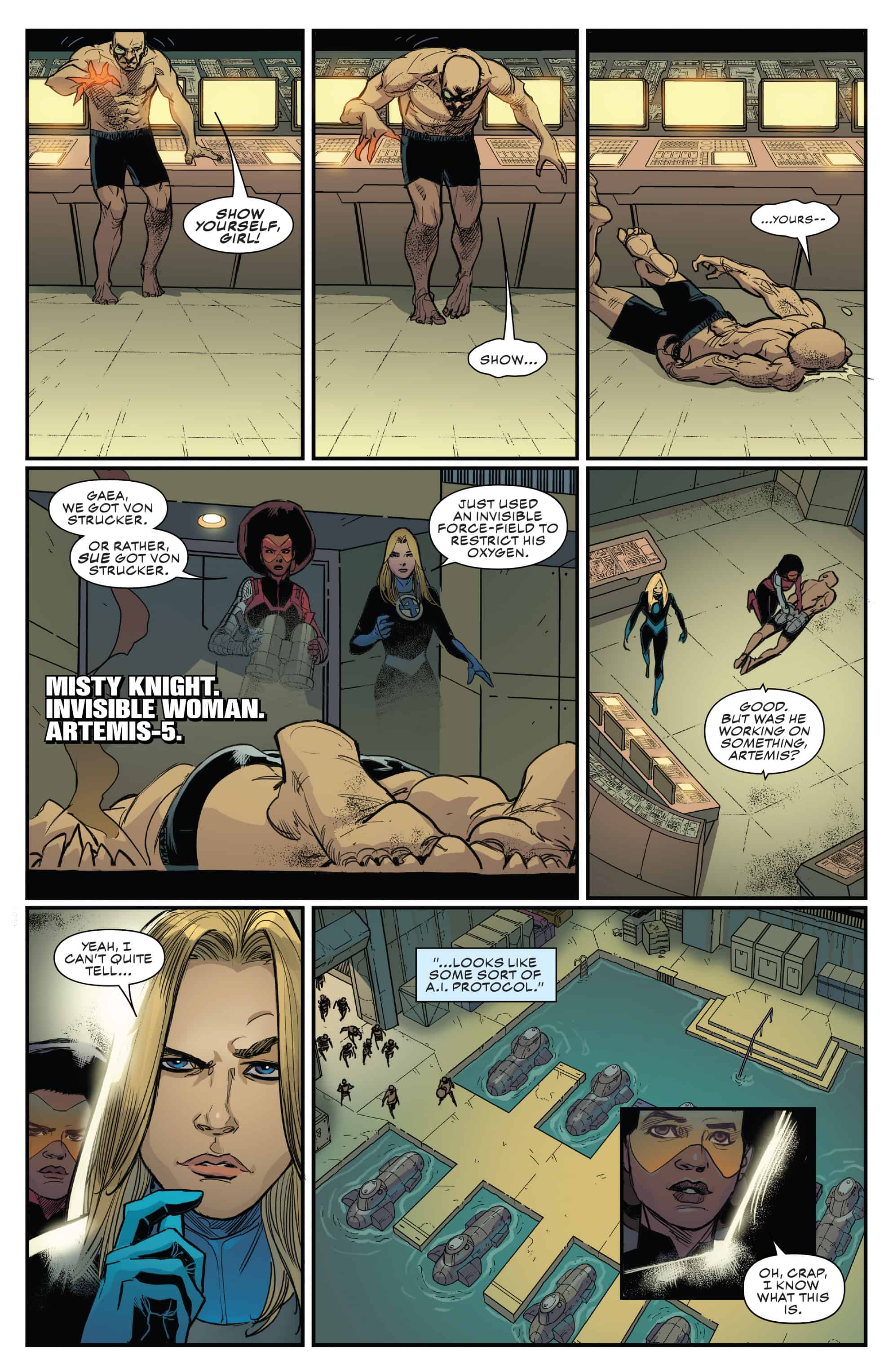 On a final note, I just wanted to swing back and point to the importance of names as we see Susan called “girl” once again in this issue. But also, the field names of the various Daughters seem like a point we can expect to be explored either in the pages of this book or the inevitable Daughters series.

It's a full-scale prison break in Captain America #11. The question is, what happens next? "Captain of Nothing" continues here.