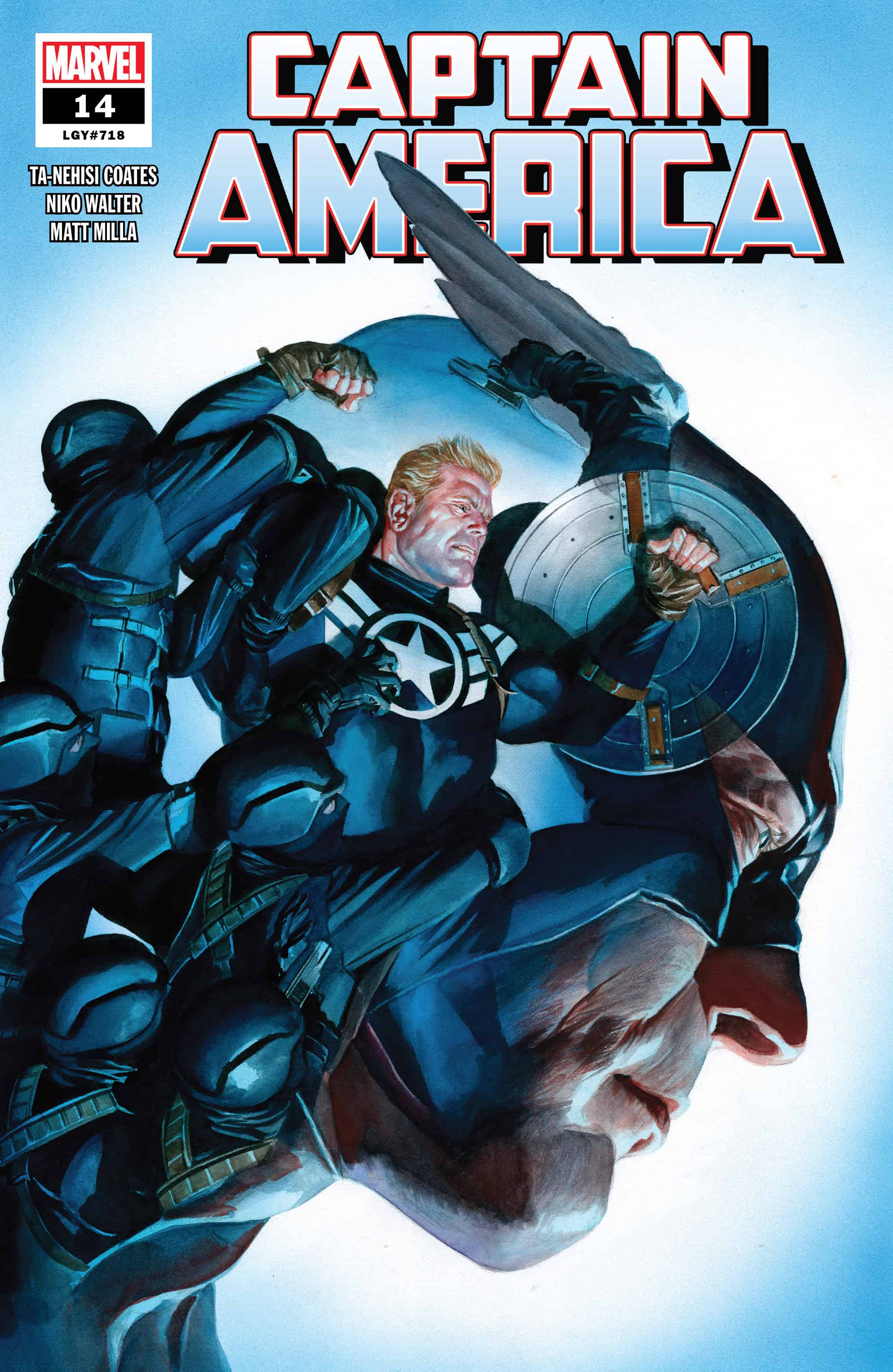 “THE LEGEND OF STEVE” CONTINUES! As Steve Rogers continues to try to prove his innocence and remain one step ahead of the pursuing Nick Fury, he and Mockingbird journey to Iowa, where a town is held in the thrall of the mysterious group known only as –THEM! 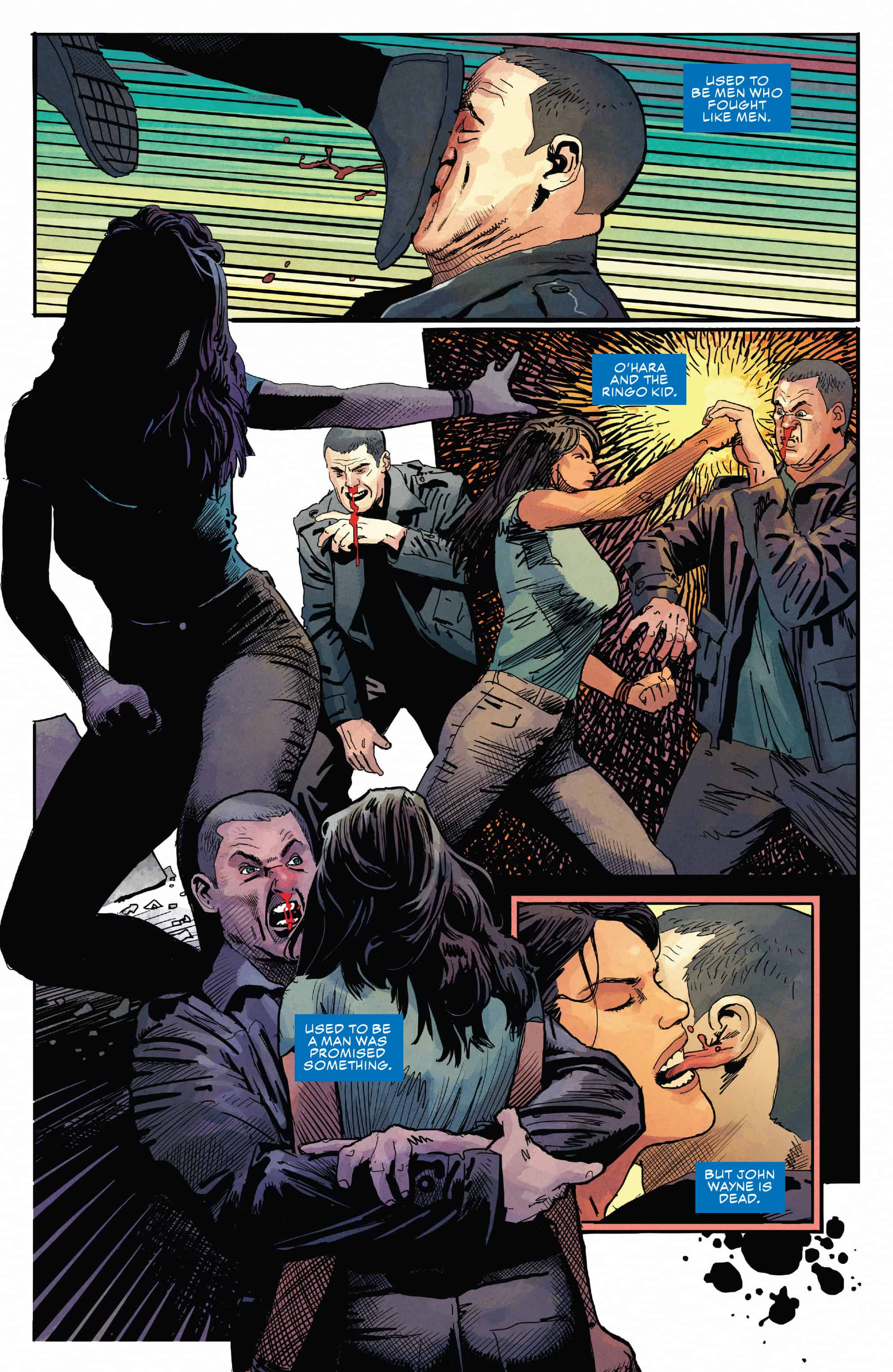 Time marches on and with it, time inevitably brings change. And change always brings with it resistance. Since the opening salvo, Coates has been examining the question of who Captain America, a man himself of a drastically different era and social structure, is in the 21st century United States of America. While the narrative has been slowly building towards this moment, it is finally in this issue that we see older and more modern notions of masculinity collide. 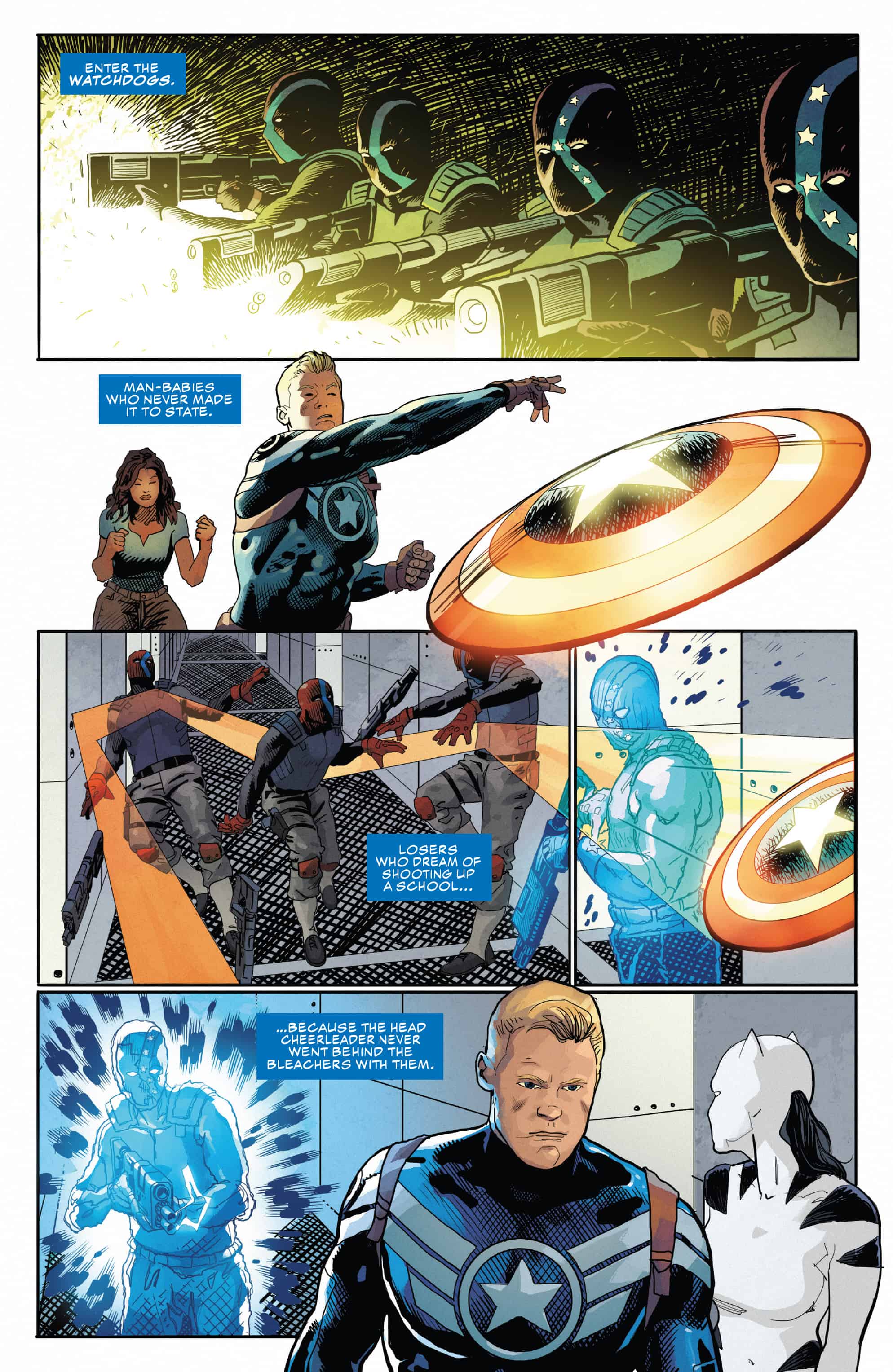 The term “incel” has found its way into the modern US vernacular, short hand for “involuntary celibacy” and directed at a certain portion of the populace. I’m not a huge fan of labels of any sort, particularly derogatory ones. I feel they hinder discourse and ensure a division among the populace. Coates purposefully dodges using the term in this issue although the spectre of the term weighs heavily upon the issue as Cap’s monologue runs through the typical laundry list of traits often associated with the term. Many will be enraged by this issue despite the fact that the majority of them did not read the issue and hence is the strength and failing of this particular run. To get the message, you must read it but with social media the way it is, most will only glean what they want from the headlines and leave the rest behind.

The Daughters of Liberty, an all-female team introduced by Coates during this run, serve as a vehicle for examining the anachronistic sense of what it means to be “a man” in the modern US. I specify the US here because notions of gender vary greatly with cultural mores. In the US, we have operated long on the notion that men are providers, warriors, protectors, etc. and thus these actions are attributed to masculinity. The masculine/feminine dichotomy has been naturalized through centuries worth of institutional interpellation when, in fact, it is merely a social construct and thus subject to change. And change it has. 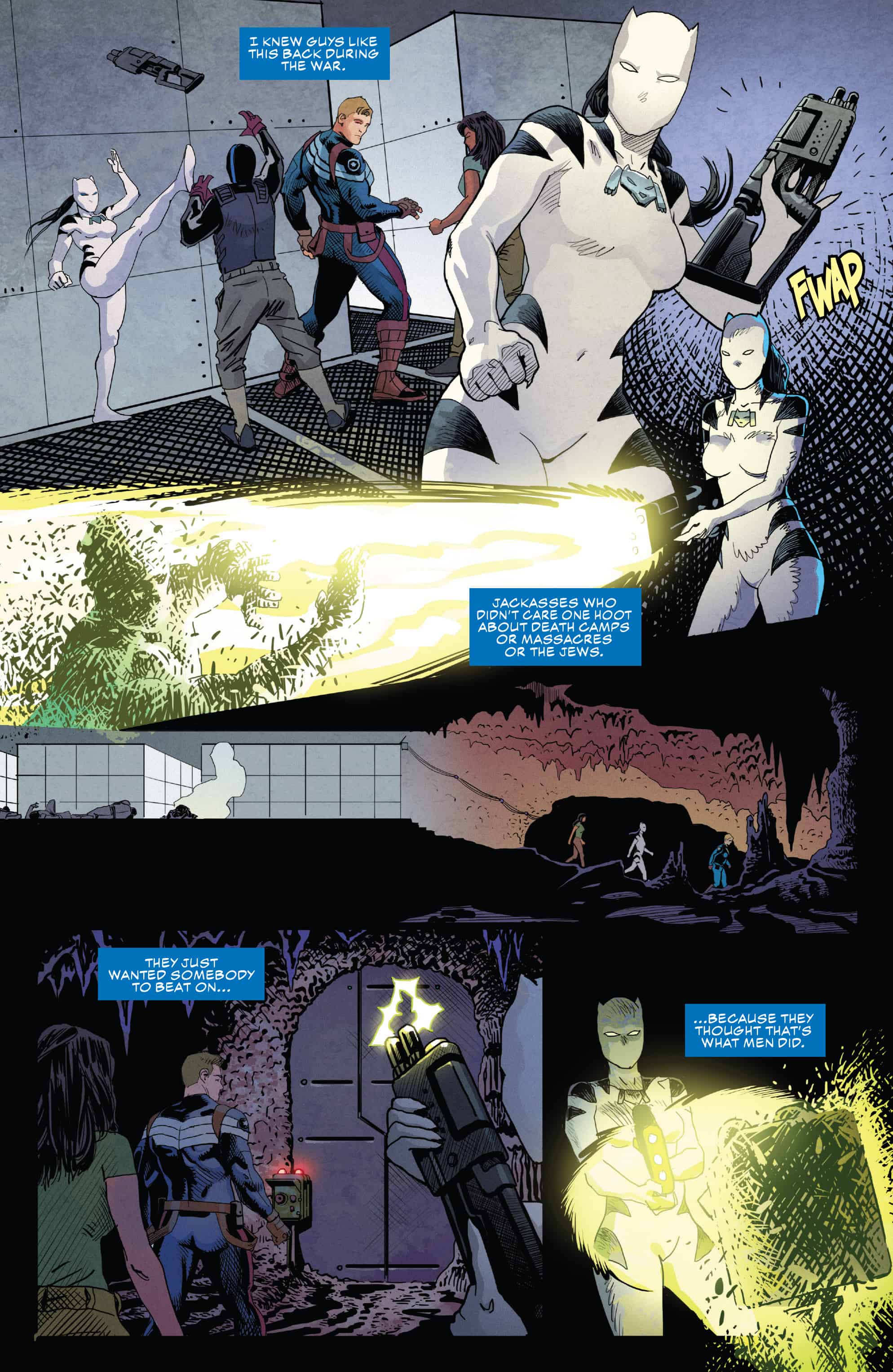 Coates even addresses the notion that somehow this development is a recent one as many objectors would argue by hearkening back to a notion that even The Greatest Generation felt the fallout of toxic masculinity and those who fall prey to dangerous ways of thinking. “Boys will be boys” is perhaps the most dangerous phrase in the English language and Coates puts Steve Rogers at the center of illuminating that fact.

And then, by the end of the issue, the stakes are raised further as we see that the problems we face in the United States, however you may frame or identify them, are no longer isolated to just these borders. As globalization pushes ever onward, local problems become global problems, just as the positive elements do. The shipping of kidnapped immigrants to Madipoor and the discovery of the international ring of villains promises that although this book has been dominantly US centric up to now, the implications of “The Death of Captain America” may have a global scale as well. 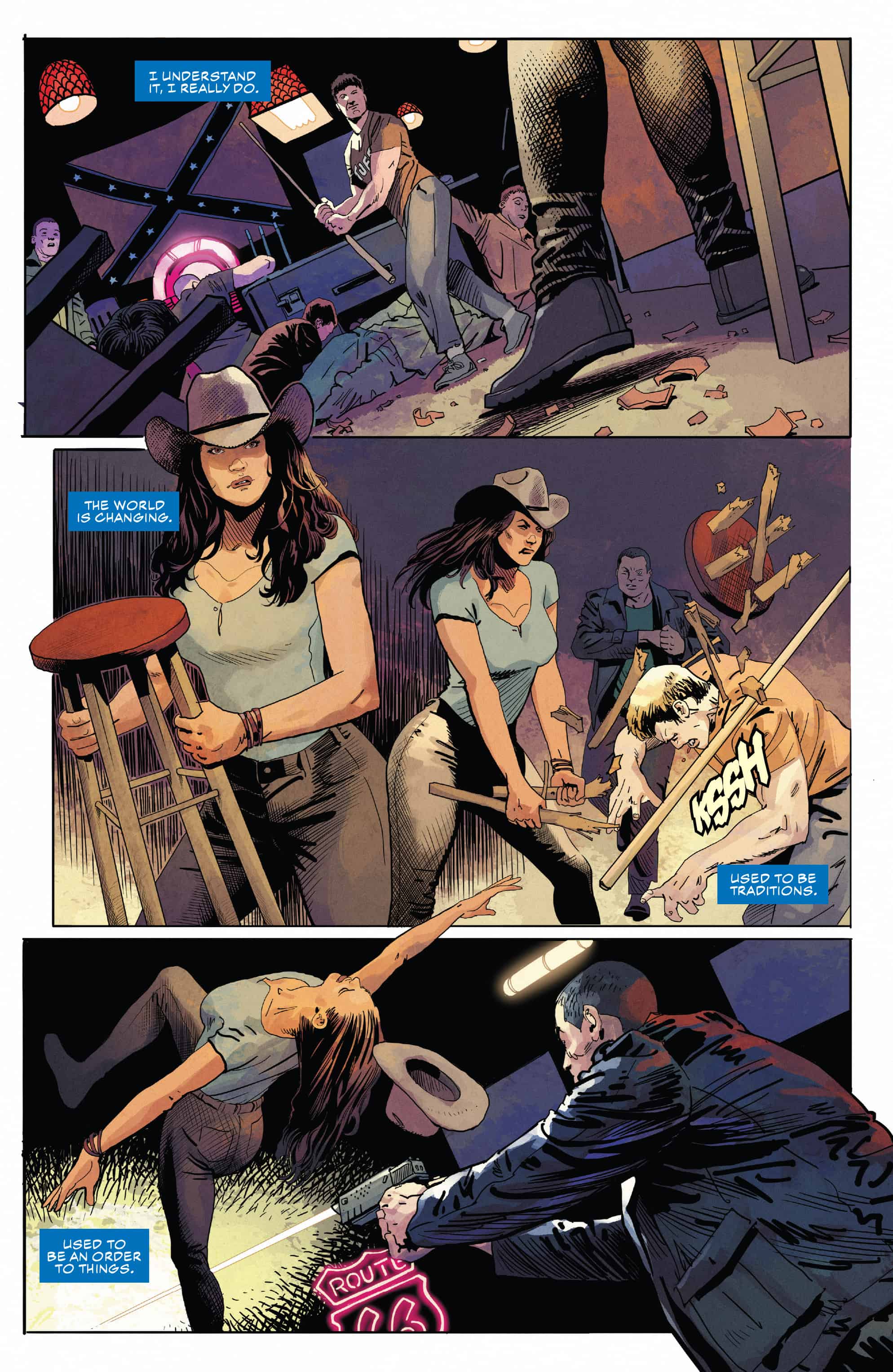 Newcomer to the series, artist Niko Walter, also does excellent work throughout the issue. In particular, there are moments (as evidenced above) where Walter excels at conveying movement and space on the page. This arc thus far (only two issues in) has seen three artists already and the solicits for #15 state the return of Jason Masters but all three artists are similar enough in style for a monthly publication to prevent any jarring effects of multiple artists moving back and forth through the narrative.

Captain America #14 (Coates, Walter, Milla) takes aim at systemic ideological problems within the United States and promises to move the conversation global in the near future.