Captain America #8: In Which Sharon Carter has Tea with the Mayor of New York 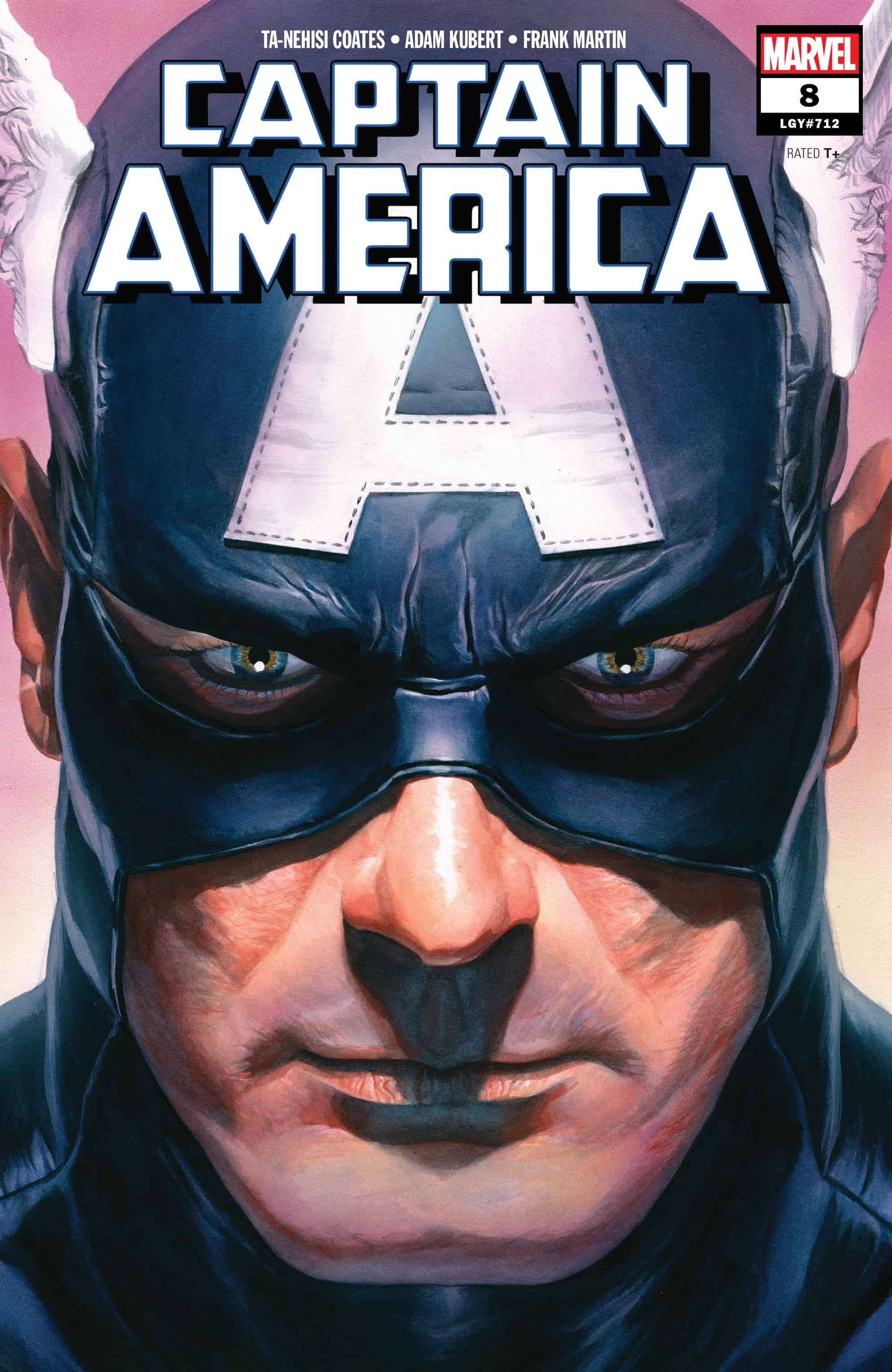 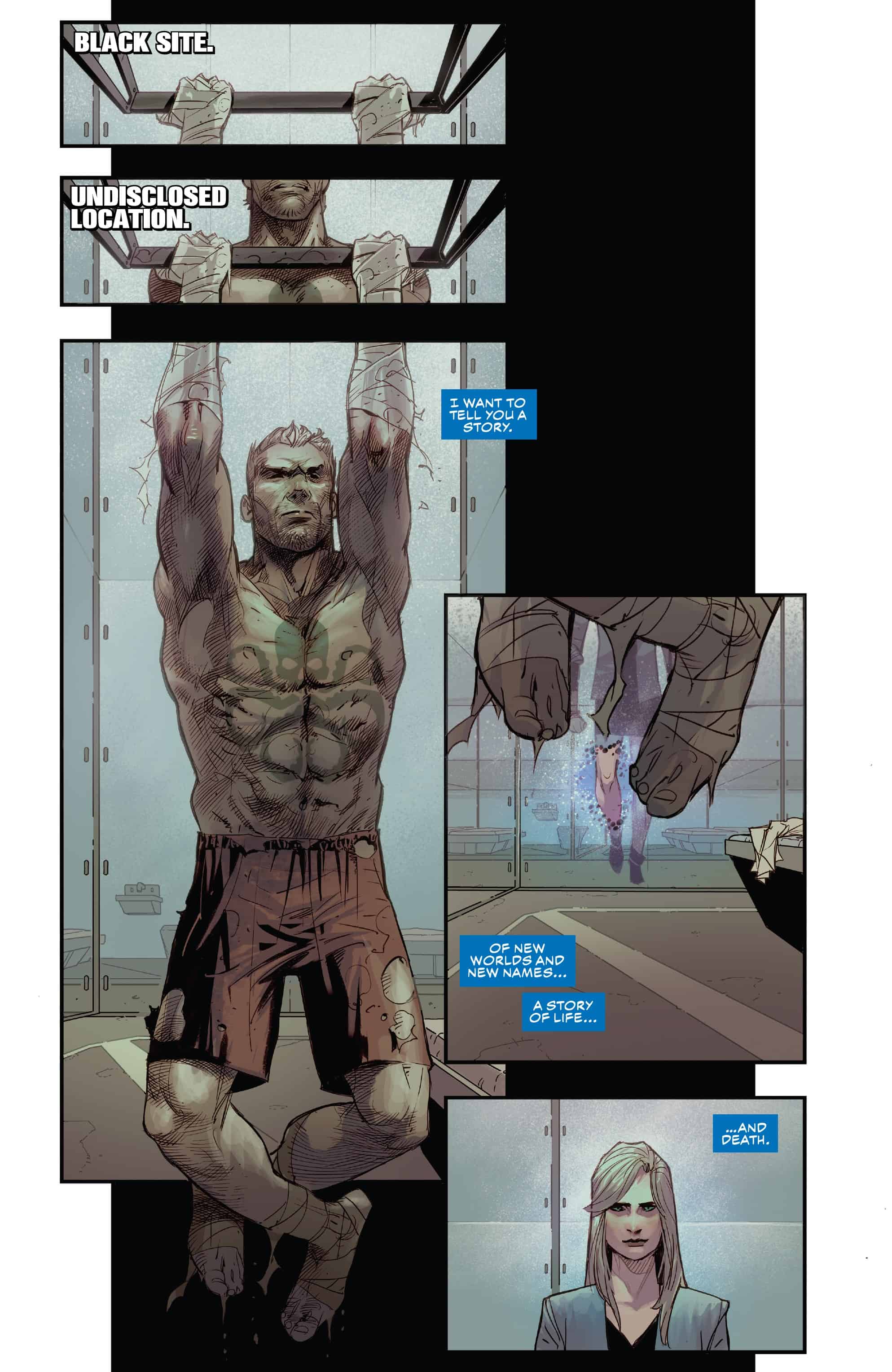 This issue tracks Steve's first days imprisoned in the Myrmidon for the alleged murder of Thunderbolt Ross. Here, Steve recounts the climate of the prison and some of his encounters with other prisoners. While Steve relays his story, we also follow Sharon Carter's plans to unravel the conspiracy that put Steve into prison, starting with Mayor Wilson Fisk. As all of this is happening, we also see Alexa Lukin free the alternate Steve Rogers of Secret Empire fame only to turn Selene loose on him for reasons as yet unrevealed.

Coates deploys a retrospective narrator in this run on Captain America in a way I have rarely seen used in comics. The purpose of a retrospective narrator is, of course, a way to refocus the narrative through the lens of historicity, or more simply, to allow for hindsight to factor into the events rather than being always of the moment. Because of this, we see dual (or triple in this case because of the doppelganger) Steve Rogerses– as he was at the time of the events and as he will be after the conclusion of said events. Because of the periodical publication schedules of the comics industry, this technique is rarely a useful one as these narratives are, by nature, continuous and unending. In using it here, though, Coates manages to provide a sense of hope that these events will resolve, yet at the same time, through careful use of language, he never manages to reveal that resolution. We know that Steve will live to tell his story but we do not know that he is free or what damage/trauma he may have taken on as a result. It is quite brilliantly crafted in that regard.

There are two moments in this book that I would like to dwell on for a moment. The first of these is Sharon Carter’s afternoon tea with Fisk. 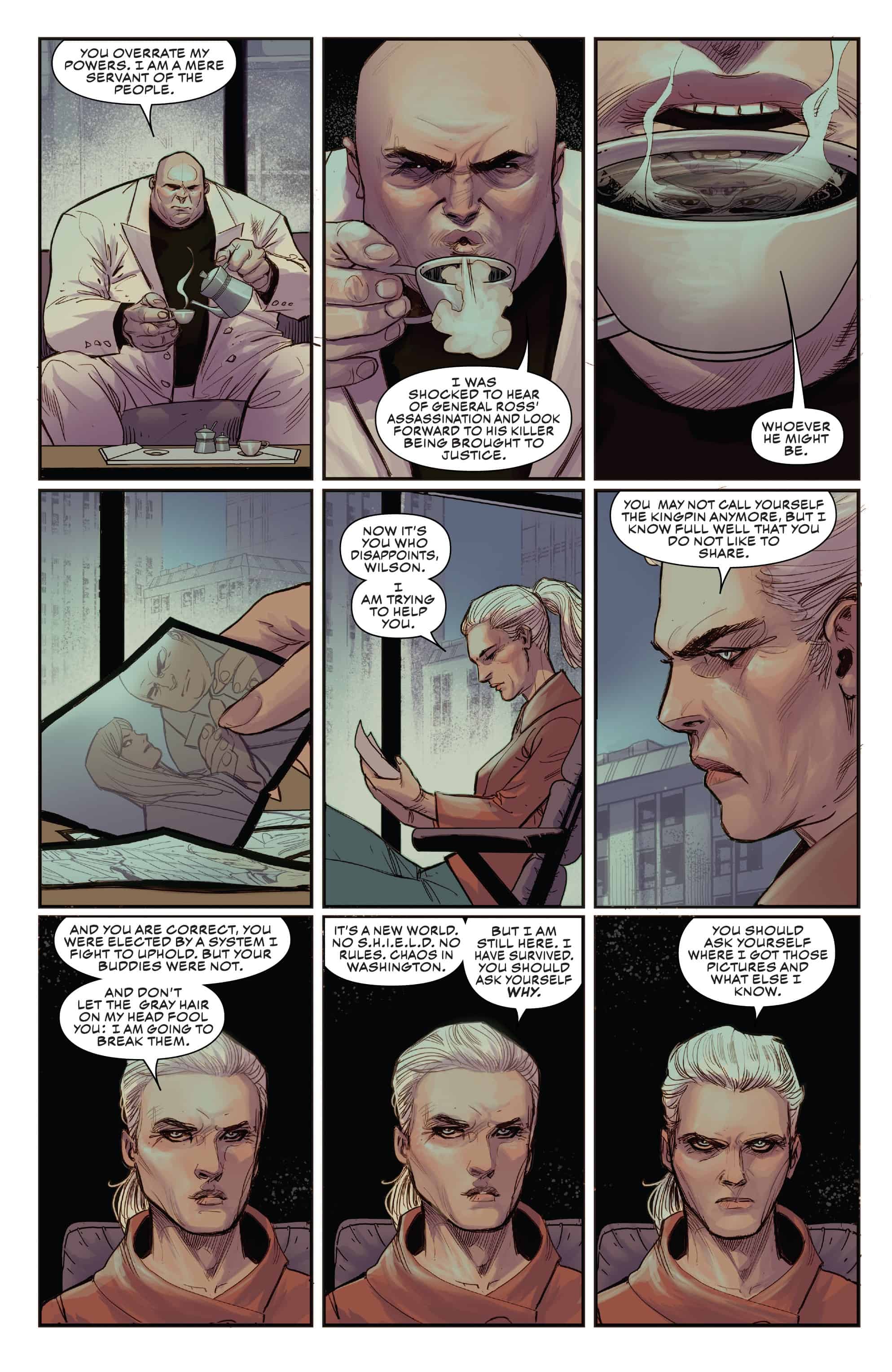 Coates may be the first writer I’ve ever read to capture Sharon in this way. Sharon Carter is a survivor. She’s a fighter. She’s a warrior. Her bag of tricks is heavily laden with the tools of the trade to include a sense of mission and purpose that often falls by the wayside when she is portrayed in comics. Rather than write her as desperate and broken as many writers in the field may have chosen to do, Coates leans heavily into that tool bag to ensure that Agent Carter stands on her own two feet and she’ll stand on your two feet if necessary. Here she manages to intimidate and manipulate a master of both crafts– a stunning sequence.

In a later sequence, we see Steve encounter Bulldozer in prison and the beginnings of the changes Steve will be forced to make to survive his time inside. 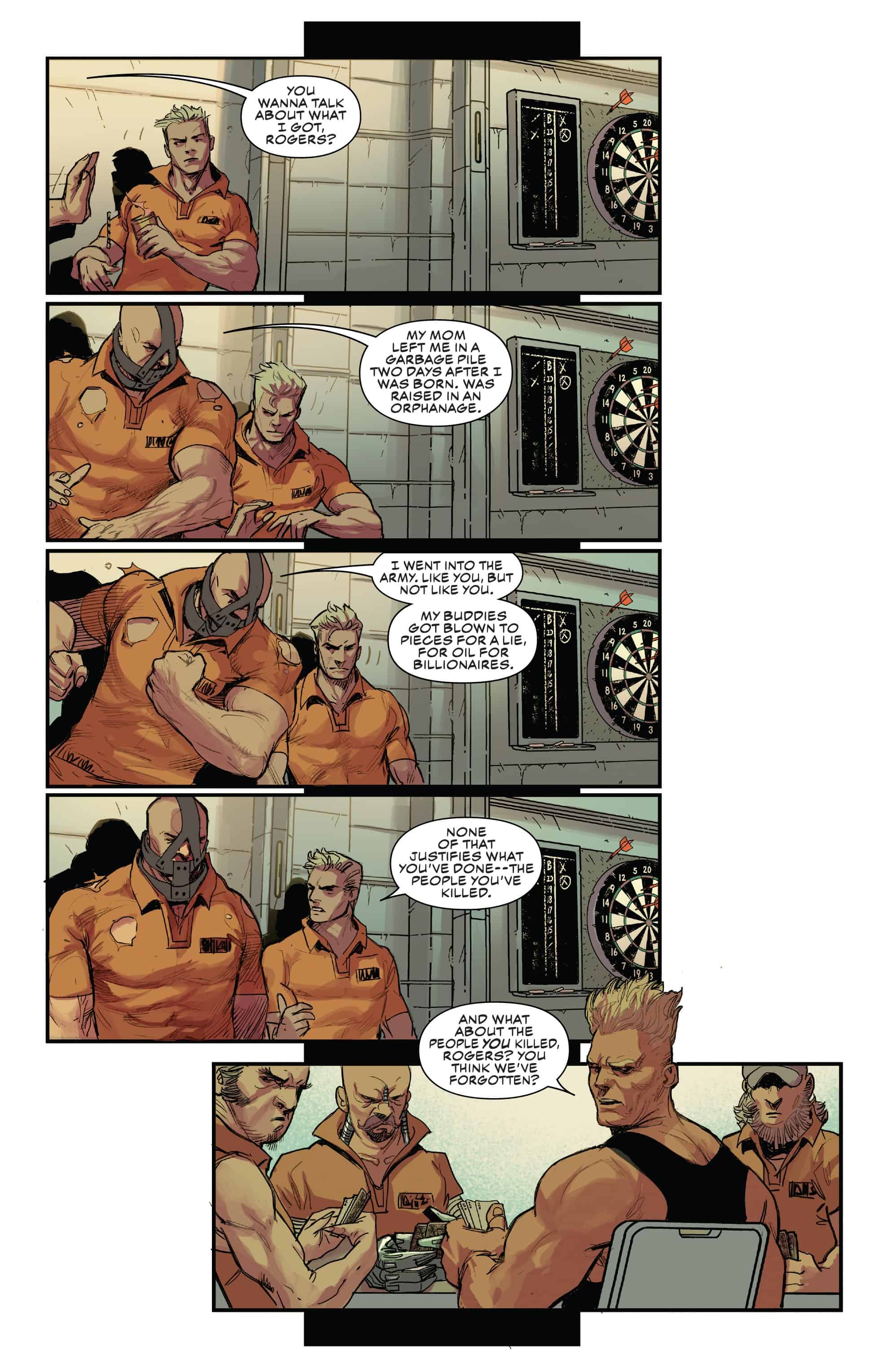 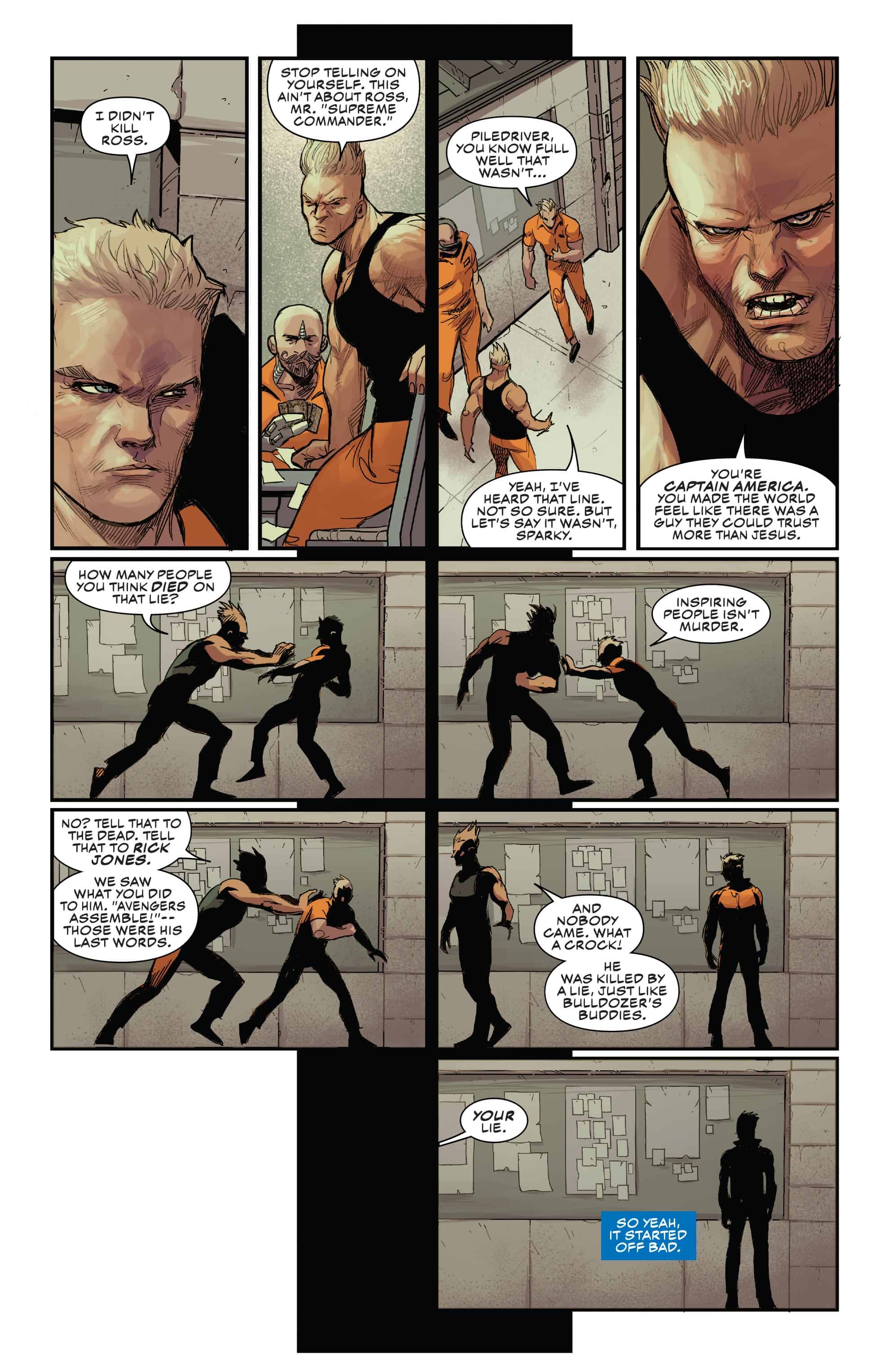 This sequence gets right at the heart of this arc. Many will be turned off by the overt political tones and that’s fine. The loss of faith in the iconography of Captain America is pervasive and we’re seeing that infiltration of doubt spread throughout the community in a form that really leaves no space for Captain America (note: Cap, not Steve Rogers) to operate as a national hero. The Power Elite have done what nobody could pull off before– they killed Captain America. It doesn’t matter who is behind the shield now because of “the lie”.

In terms of artistic direction, I still feel like Kubert is not a great fit for the book tonally but his layout work (as evidenced above) is absolutely remarkable. His use of negative space on the page is the most striking feature to me. The final silhouette of Steve standing on his own with no parallel panel opposite him, breaking the symmetry of the page is the mark of a true layout genius.

Captain America #8: In Which Sharon Carter has Tea with the Mayor of New York