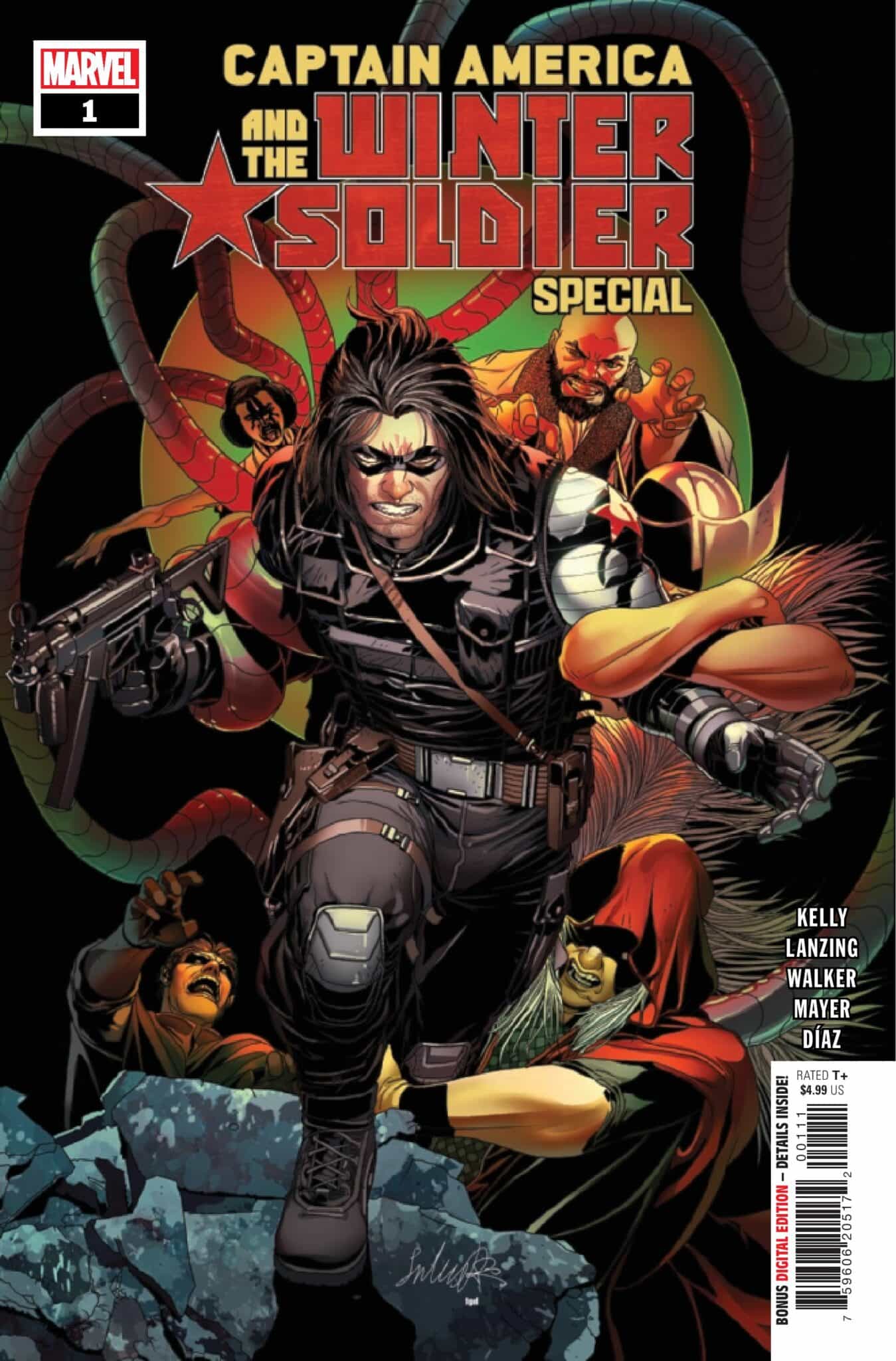 COLLIN KELLY and JACKSON LANZING team up with superstar artist KEV WALKER to reveal the origins of Captain America’s newest foes and what the Outer Circle’s next move means for the future of the Winter Soldier in CAPTAIN AMERICA & THE WINTER SOLDIER SPECIAL#1!

As we head into the new year, Marvel is moving ahead with their Captain America’s event Cold War, where Lanzing and Kelly have been developing this storyline swirling around a group behind some of the most important events in American history dating all the way back to 1922, and manipulated players, who were completely unaware of their role in their lives. Does the team, along with artist Kev Walker knock this one-shot out of the park? Let’s dig in and find out.

The issue begins 100 years into the past, four years after the end of World War I, when a Mssrs. Princip and Fortunov are surveying a town that was originally part of a battle from the war decimated. Nothing left standing except some shells of what used to be. As they discuss where Mr. Fortunov is getting to, the members of the Outer Circle of the time, Etien Argent, the world’s first secret billionaire, Ika Gaboje, former head of the Wakandan engineering vanguard, and an artist that goes by “Ana”, and it is with these five souls assembled do we see the formation of the Outer Circle. Lanzing and Kelly go a long way in trying to make this clandestine group a force to be reckoned with, which is a difficult task, when you have groups like HYDRA, AIM, the Hand, etc, but it’s not impossible. Just look to Hickman, and the creation of ORCHIS. If Lanzing and Kelly let this play this correctly, we could see the formation of a new global peacekeeping organization, like SHIELD. Hell, maybe this could be the beginning of multiple alliance states to create their own SHIELD counterparts, like the UK’s STRIKE.

Kev Walker is the artist here, and his style gives this story this scratchy style that’s reminiscent of artists like Michael Lark, that lends to the atmosphere that this team is trying to convey. It’s more grounded, and rooted into a more realistic setting and tone. I also really enjoyed his take on these characters that are introduced here, especially Mr. Fortunov, who hails from Latveria. Latveria is synonymous with Doctor Doom, who is THE Marvel villain to which all other villains are judged, so we’re used to seeing Latveria through his eyes, or the eyes of whoever is facing off against him, so to see this land, or the people, before Doom always pings my radar. Unfortunately there’s not much exploration of Latveria from this time here, but I’m hopeful we’ll see that in the coming months.

This one shot really had my interest, unfortunately there were just some things that didn’t work, the main one being the lack of Winter Soldier. The story was billed as being the origin for Bucky, and his transformation into who he became after losing his arm to the bomb that led Captain America believing him to be dead, so the lack of development here was a bit of a let down. The only development we see is what Bucky’s new role will be, which is very interesting, but I was hoping to see something more. Fortunately that didn’t ruin the book for me.

Lanzing and Kelly team up with Kev Walker as they build up to the big Cold War story that’s going to impact Steve, Sam, and Bucky, and put their relationships to the test? Can they survive it?