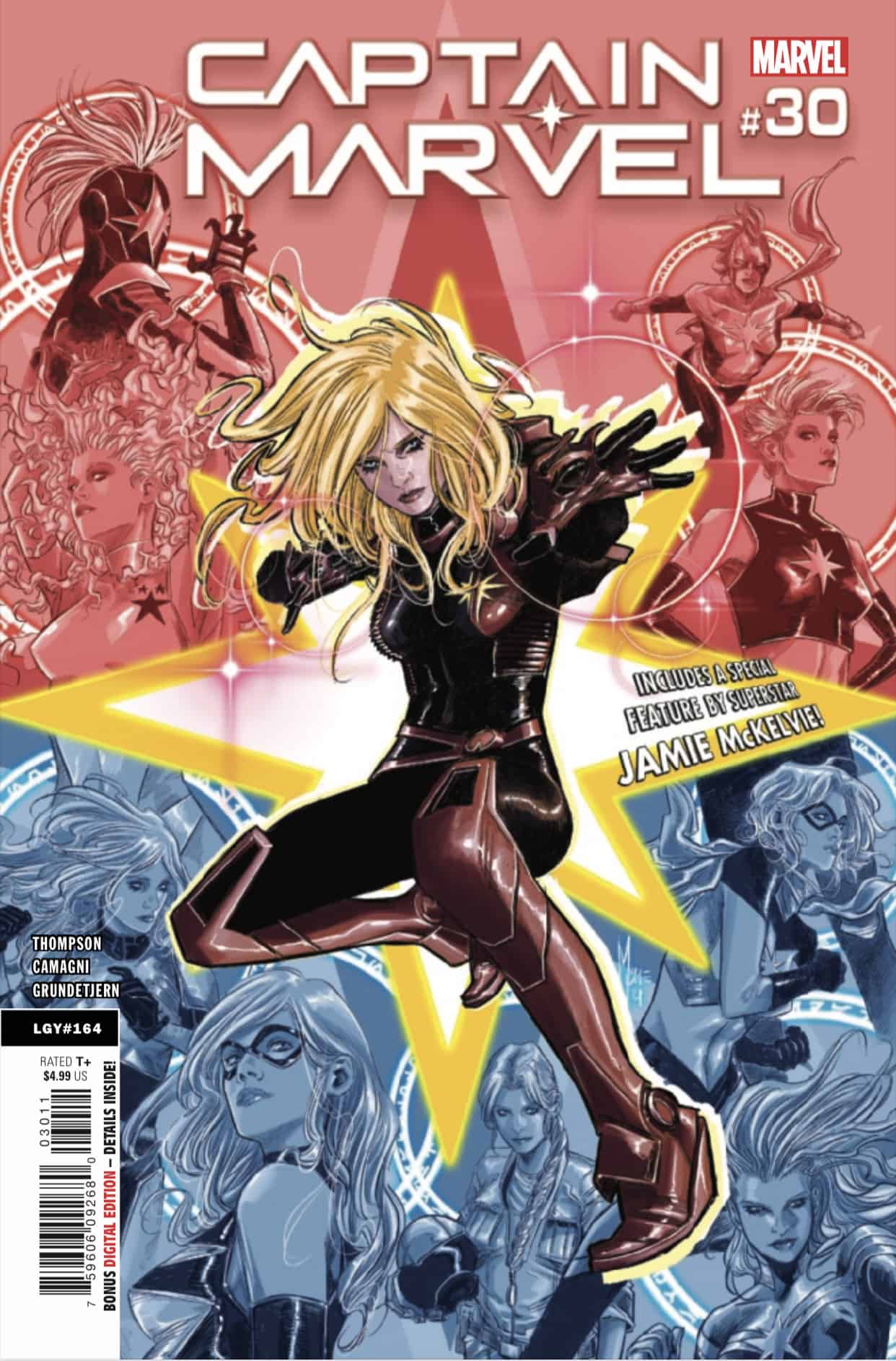 Carol Danvers thinks she’s seen it all, including a terrifying future that only she can prevent. Convinced that magic is the answer to her problem, she’s about to face a hard truth: No magic in the universe can save her from herself. Captain Marvel holds the lives of billions in her hands—and the decision she makes here will change her forever. Past, present and future are about to collide! Don’t miss the oversized 30th issue of CAPTAIN MARVEL, including a special story written and drawn by Jamie McKelvie, the original designer of the Captain’s now-iconic red, blue and yellow suit!

The final issue in which Carol tries to learn magic to stop Ove from creating the future she just came home from, and had to turn to the Enchantress because literally every other magic user she knows told her “lol nah bruh, k byeeeeeeeee,” and it was a doozy. Plus we get a nice little story with Ms. Marvel and Carol by Jamie McKelvie, where Carol relearns why she does what she do. It’s also the first full arc by new series artist, Jacopo Camagni. 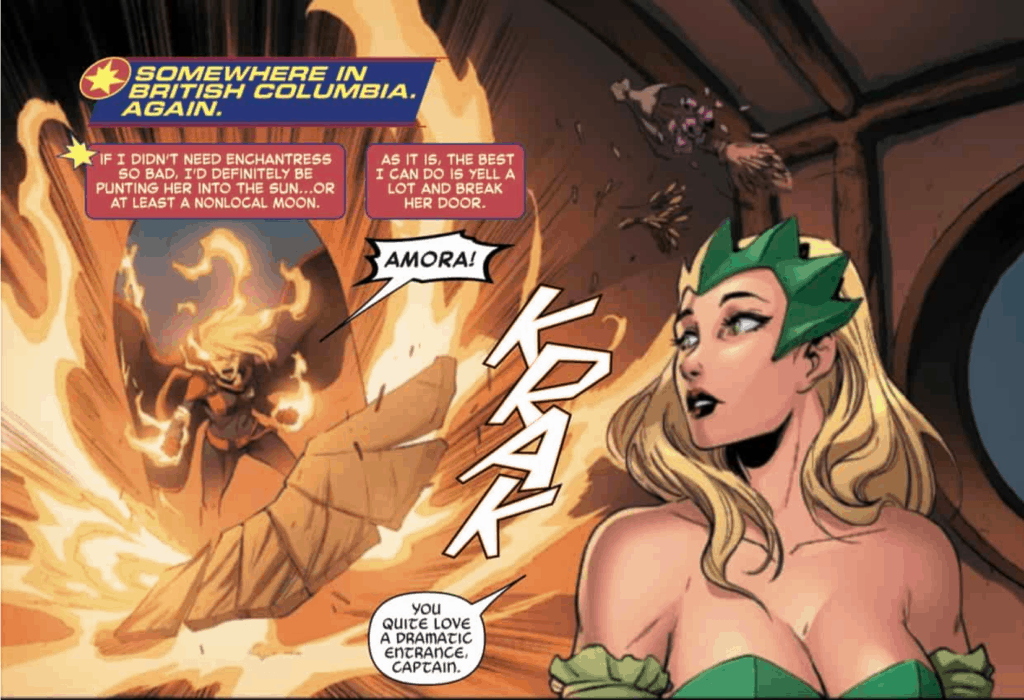 So let’s start with the good. It was a fun little three part ditty that put Carol into a situation she wasn’t comfortable in: dealing with magic. As a big fan of Marvel’s oft-overlooked magical corner, it was nice to see Carol interact with this world. Sure, most were just one panel and done, but this story featured the Enchantress, a magic character who unfortunately rarely gets used. It was nice to delve into what makes Amora Amora, and not just some elaborate plot to shag Thor, or take over Asgard. Carol ends up doing something Carol would do though, and does something stupid in the end that will come back to bite her in the ass. Even though she did it for the right reasons, the ramifications are something that’s definitely going to come back, and I want to see where Kelly takes us. Kelly’s handling of Carol and her world has been some of the best Danvers has had in decades. Her voice, and how she writes Carol and her friendships are quite easily the best I’ve read in years. It just feels real, and reads like my own interactions that I have with my close friends. Also, Kelly is willing to put Carol in situations that aren’t exactly her comfort zone. Whether it’s a story set in a potential dystopian future, to follow it up with a story steeped in magic, Kelly’s giving you something a lot of other solos aren’t: unpredictability. 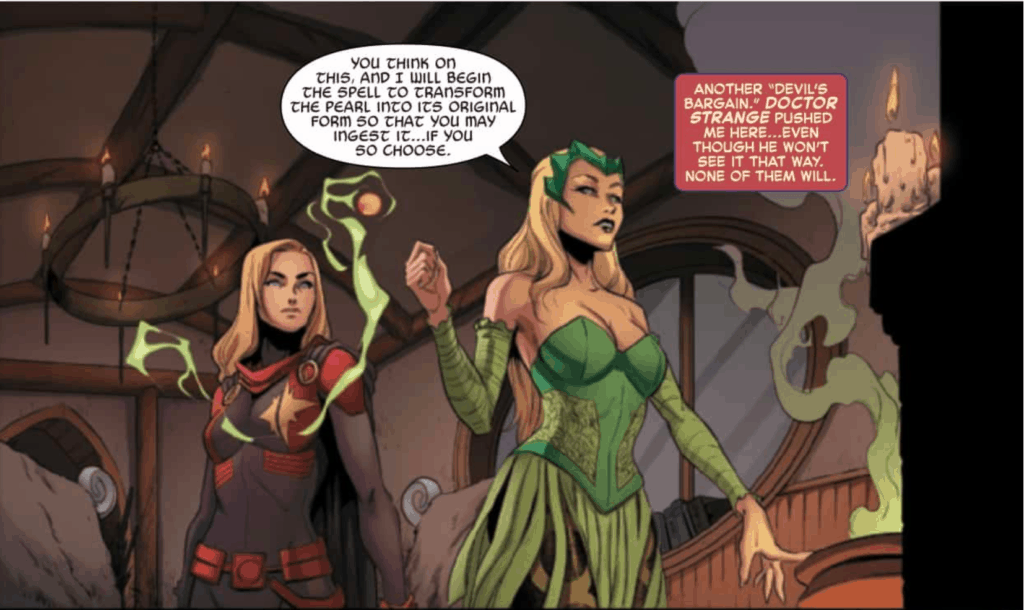 Unfortunately those stories don’t always land, and this one, while not a bomb, was not Kelly’s best. I liked that it touched back with Ove, because he’s got a lot of potential, and his ties to both Asgard, the Enchantress, and her world, as well as the equally fantastic world of Atlantis, and Namor will opens lots of doors, and allow him to interact with the greater Marvel Universe. The bad was the landing just felt a little too contrived, and how Amora found out Carol’s real plan was a bit too dim. They were in telepathic contact during part of this adventure, but it took her this long to realize why she was doing what she did? Just a little too convenient.

Camagni’s art is a little uneven here. This is my first exposure to his work, so I don’t have anything to gauge the quality with what’s been presented here. There’s some really incredible panels, but a lot of generic, even mediocre stuff too. I’m sure he’s just an artist who needs to grow into himself in this character and her world, so I’m willing to give him that time to grow. The things he needs to work on are things that I’m sure he’ll perfect as time goes by.

McKelvie’s little extra was a very cute little story that was needed after so much doom and gloom that Carol’s had to deal with forever. Even in the slower issues, where she has a beer buddies night at a high tech escape room, to her growing pains after the breakup between her and Rhodey didn’t always feel the most optimistic. So seeing her really just letting her hair down was a treat for me.

Kelly keeps Carol rolling with the punches, and reminds me why I love Carol: she doesn’t know everything, but always willing to do whatever it takes to save the people she loves. Even when it paints her in a bad light. It’s the humanizing of Carol and her world that keeps me coming back for more.