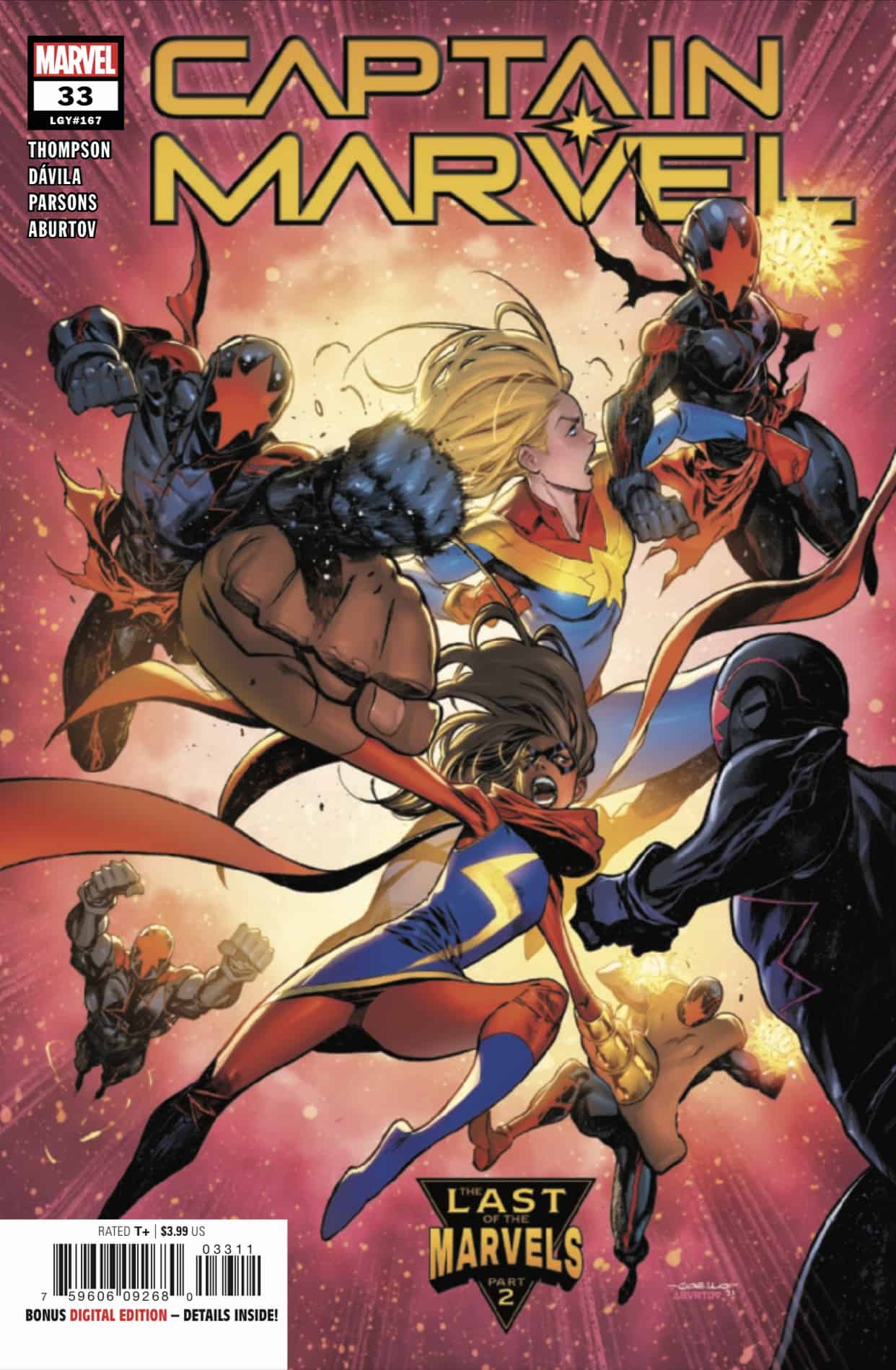 The Marvels are under attack! First they came for the captain…now they’re after the youngest to bear the title. Carol races to save Kamala Khan, but no one knows—least of all Carol—what the Dark Marvels are up to next…or who they’ll target. And this time, not even the dead are off-limits. Kelly Thompson and Sergio Dávila deliver a shocking reveal—the first of many!

It’s part two of the Last of the Marvel’s, and Carol’s going balls to the wall to keep Kamala, Ms. Marvel, out of the goopy Vox Supreme Symbiote suits that captured both Phyla and Monica, as well as a few other guest judges. Kelly loves to keep Carol on her toes, and with this threat it could prove to be just too much for her to handle on her own. Carol calls in Jess, Rhodey, and Jen, plus her sister, the Kree’s newest Accuser, to help her save Kamala from succumbing to Vox’s control. 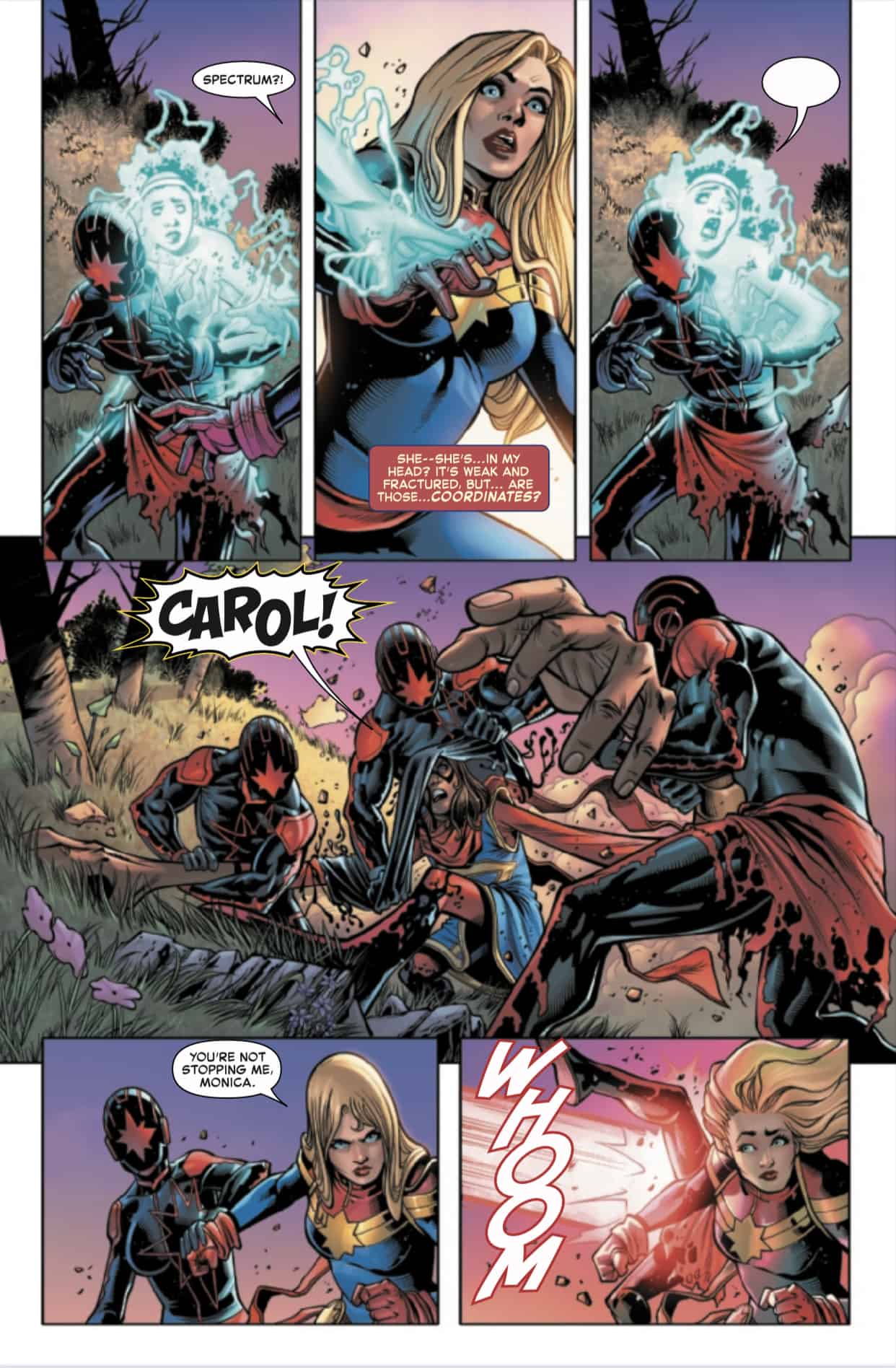 I’ve really enjoyed Kelly’s use of the Vox character by adding him/them to Carol’s arsenal of villains, because other than a small handful, Carol’s rogues gallery is quite slim. Also, to take a character from a mini involving the Inhumans, and combining him with the Kree’s Supreme Intelligence has increased the creepiness of the character exponentially. Before Vox was just a husk, but now, now he’s capable of being so much more. 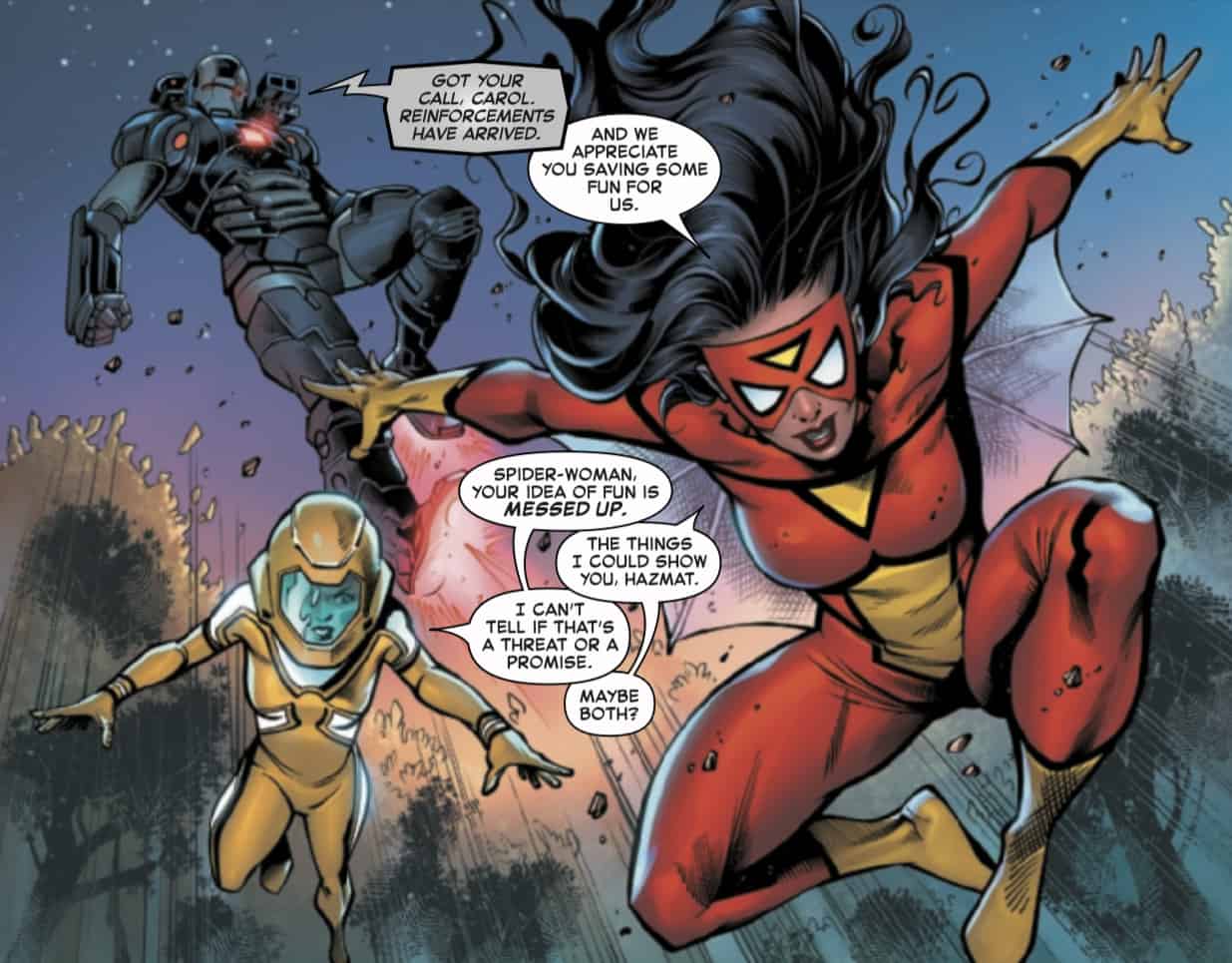 The story is quickly paced, and the flow doesn’t seem so decompressed here. A lot happens in a very short amount of time, and that’s been one of the hallmarks of Kelly’s run thus far. She tends to pack in the introspective character moments in the issues between her big storylines, but doesn’t skimp on Carol’s here. She also respects past continuity by alluding back to Avengers vs. X-Men, where Mar-Vell crash landed onto an uninhabited planet while having a spark of the Phoenix, so it’s this attention to detail that really makes me love Kelly’s approach to Carol and her world. We’re still unsure of what Vox Supreme’s goal is here, but I’m fully invested here.

Sergio Davila is the artist again and his work has improved this issue over the last. Not that I didn’t like it, Davila’s style is quite to my liking, it just seems more dynamic here, which could be attributed to the cast size expanding from last issue. I especially like the way Davila portrays Carol and Kamala in this issue. I hope to see Davila in this book after this arc is completed. His style compliments Kelly’s take on Carol and her world.

It’s the Last of the Marvels, and Kelly and Sergio are just starting to heat things up. Kelly continues to up the ante for Carol with each new storyline, and develops Carol’s importance to the Marvel character firmament. If given the chance, Kelly could become the definitive voice for the good Captain Marvel.