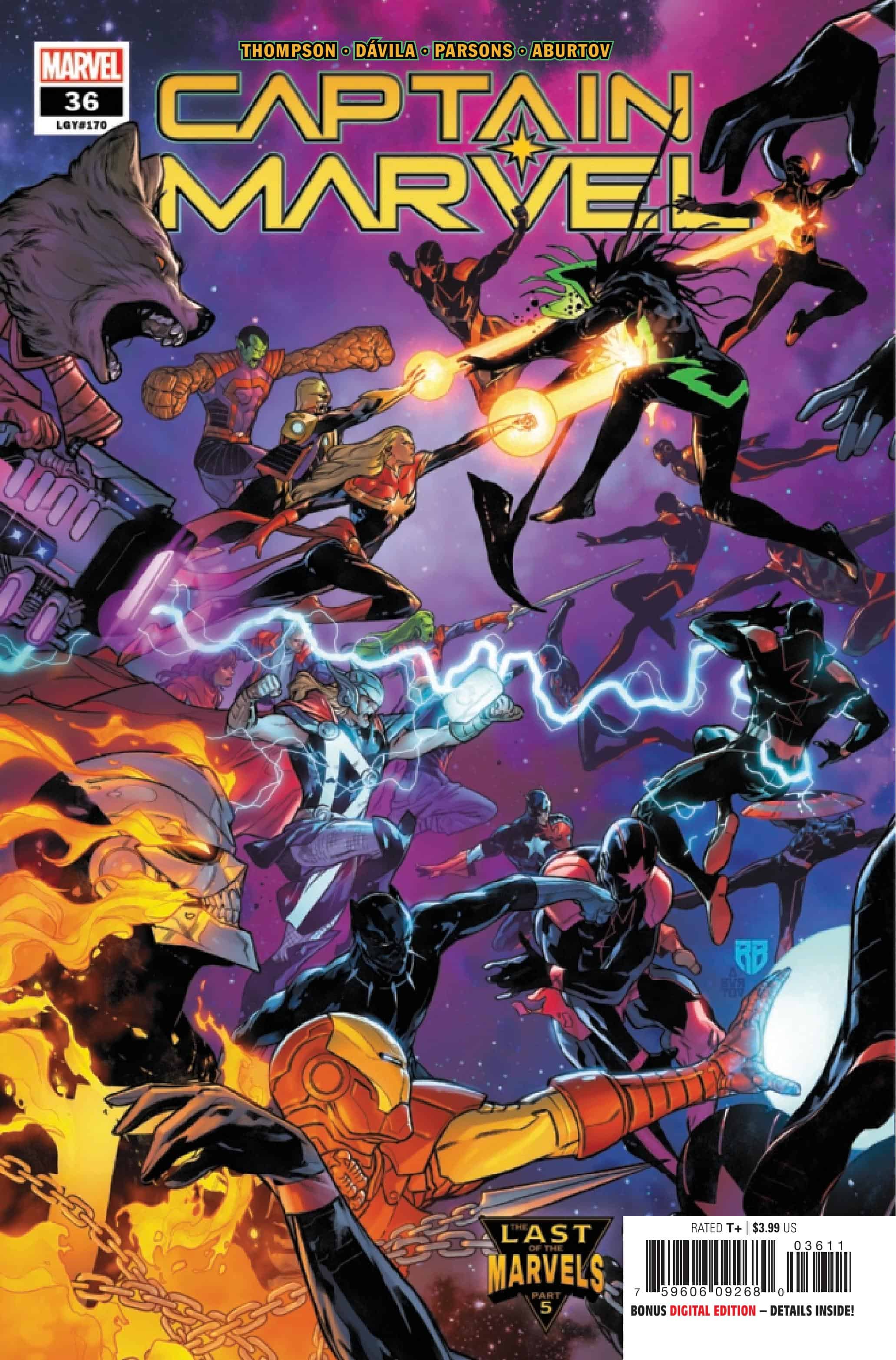 A fight so big we had to add an issue! It’s all hands on deck as Carol teams up with the Avengers and the Guardians of the Galaxy to take down Vox Supreme! But Captain Marvel’s surprise ally is someone nobody expected. She’s about to change everything—and it all starts here! Don’t miss this epic finale as an explosion of heroes takes on the battle to save not just the Marvels, but the Marvel Universe!

The finale of Last of the Marvel’s, and Carol and the cavalry came into the rescue with full guns blazing. Carol and Lauri discover the origin of the suits, and with the help of the Avengers and Guardians, they do it in the usual Carol style: balls to the wall, and work out the details on the fly. The ending looks to set up a new status quo, and it looks like we’ll see more of them in the upcoming run, which I am here for. We’re also given a little more information on what exactly the Binary doppelgänger is, and how she was created.

The ending of this story was a tad lackluster, but it was a pretty exhilarating ride along the way. I was disappointed with how little Monica, Genis, and the rest of the Marvel family was given during this arc. It’s a shame, really, but I hope this is just the beginning of their use in other books (we already know Genis is getting his own mini, and Monica will be a part of the upcoming Thunderbolts mini). Plus we’ve got a whole new world to explore with Carol, and her powers. With Binary now being an independent sentient being, what’s going on with Carol? Is this a permanent effect, or will she be able to obtain her former power levels? Is Binary leaching from Carol? Will Carol lose her photon powers, or will she return to her pre-Rogue powers, and strength levels? If she loses her Binary powers, where will we go from here? It’s a world ripe with possibilities, and I can’t wait to see where Kelly goes from here. Will I love it? Who can say. Kelly’s run has been the most consistently good Carol run I’ve read since the Chris Claremont run in the 70’s. Kelly’s voice for Carol and her world is fresh, and the characters seem authentic under her pen. Not every story beat lands, but that’s okay.

One thing that hasn’t remained consistent is the art team on this book. After Carmen Carnero left, we’ve had a veritable who’s who of artists on this book, and this arc was no different. We were given the killer team of Sergio Davila, Sean Parsons, Roberto Poggi, and Erick Arciniega, and they’ve continued the trend of excellence that we’ve become accustomed to. Sergio really played up to his strengths when it comes to portraying characters in motion, especially Carol’s hair. She was always rocking a killer Brazilian blowout in this arc, and giving Binary’s halo of fire hair as billowy, and full of volume made for a nice touch. I do wish we could get a consistent art team on this book, like we’ve had with Pere Perez, and his run on Spider-Woman over the last two years. That said, guys, we’re getting Juan Frigeri in the upcoming arc. This guy is easily one of the best up and comers Marvel has, and I could easily see him as one of the Young Guns.

A killer idea to involve the rest of the Marvel family in Carol’s book to help solidify her connection to the mantle, and those who’ve borne the name over the years. Unfortunately for us, and Kelly, the cast seemed to be too crowded to really get any real development or character progression to help form the ties that could bind these characters together. Which is a disservice to Kelly, and her run on this book, as character development has become one of the biggest strengths this volume has going for it.