Captain Marvel #44: In Space No One Can Hear You Scream… 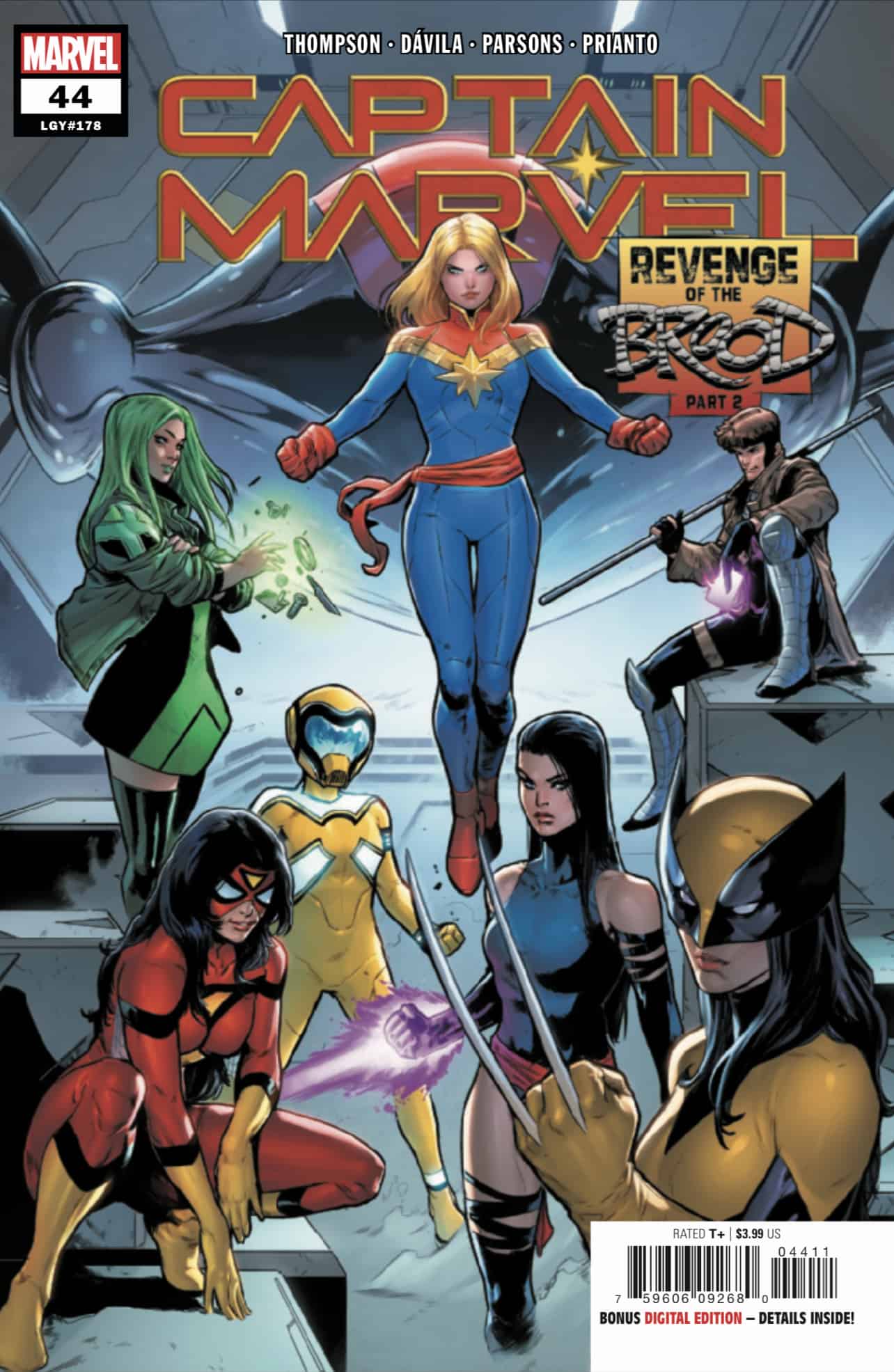 The Uncanny Carol Danvers returns to space – and to the X-Men?! A mysterious degraded message from Rogue has arrived at the same time that Carol's emergency beacon begins screaming with cries from Binary, and that cannot possibly be a coincidence. Carol assembles a team of allies, including Polaris, Gambit, Wolverine, and Psylocke, bent on rescue, but what they find instead is a dangerous old enemy bent on revenge.

It’s Carol, Jess, Jenn, and some X-Men in deep space, trying to save Rogue from a rogue (bad pun) faction of the Brood, but is everything what it seems? Kelly Thompson’s here with her “Last of the Marvels” road dog, Sergio Davila, and they’re bringing the heat with them. Can this team save Rogue, and the day? I guess we’ll have to read it to see if that’s the case.

Kelly Thompson’s run has been one of the most consistently good to great runs since the beginning of the post “Never Surrender” era of Avengers related titles, so seeing her at forty-four issues isn’t all that surprising, as she’s used some Marvel mainstays that you just don’t associate with Carol, or even the Captain Marvel mantle (like the Enchantress, Doctor Strange, Hazmat), and strengthening some bonds that runs deep in Carol’s world (Spider-Woman, the Avengers, even Rogue), so seeing the success she’s having comes at little to no surprise. Add to the fact that she’s given us some really memorable new villains that have a lot of potential to be used further out in the regular Marvel universe.

One of the highlights in this story is Thompson’s effort to rebuild her connection to the X-Men universe, which has been essentially broken since House of M, that not only ruptured her relationship with the mutants’ world, but also the Avengers as well. So using Rogue as the binding tie could go a long way in doing that. If you’re unaware of the Rogue & Carol relationship, to say it’s strained is too kind, but every time we get a story to try to make it something it’s not, and it just doesn’t feel right. Kelly ran into this same issue with her first arc on this run, and like I said, it just didn’t work. Rogue stole something that can never really be forgiven, but giving Carol the task of saving her from the Brood, this could give us facets to this relationship that runs deeper than this begrudging acceptance that we’ve grown accustomed to.

Carol’s relationship with the Brood runs deep. It was under their torture and experimentation that opened up Danvers next chapter as the entity Binary, who would making her one of the strongest heroes in the Marvel universe, at the same time, stripping her of her reality that she had tried to rebuild after what can be described as her death of who she had been up to that point, makes this story all that more personal. I hope that Kelly will give us a story rich in lore that will give us a next step on who these characters are, and how they interact with each other.

Sergio Davila is back, and he’s here to show you why. His character work here is fun, and fluid, that paints this tapestry that runs the gamut of elegance and chaos, without missing a step. The hair is full of volume and bounce, with the bodies being a bit on the less outrageous that we get in comics. The action is engrossing, and the scene that seemed like a scene right out of the movie Alien (by Ridley Scott). Hopefully Sergio becomes our next regular artist after this storyline is finished.

Thompson continues on her winning streak with Carol and her world, giving us a tale that takes us to the furthest reaches of space, and up against one of the most terrifying alien races in the Marvel universe. I hope the ending is as polished as this issue was.

Captain Marvel #44: In Space No One Can Hear You Scream…