Kraven the Hunter goes after his most prized prey yet…Captain America! 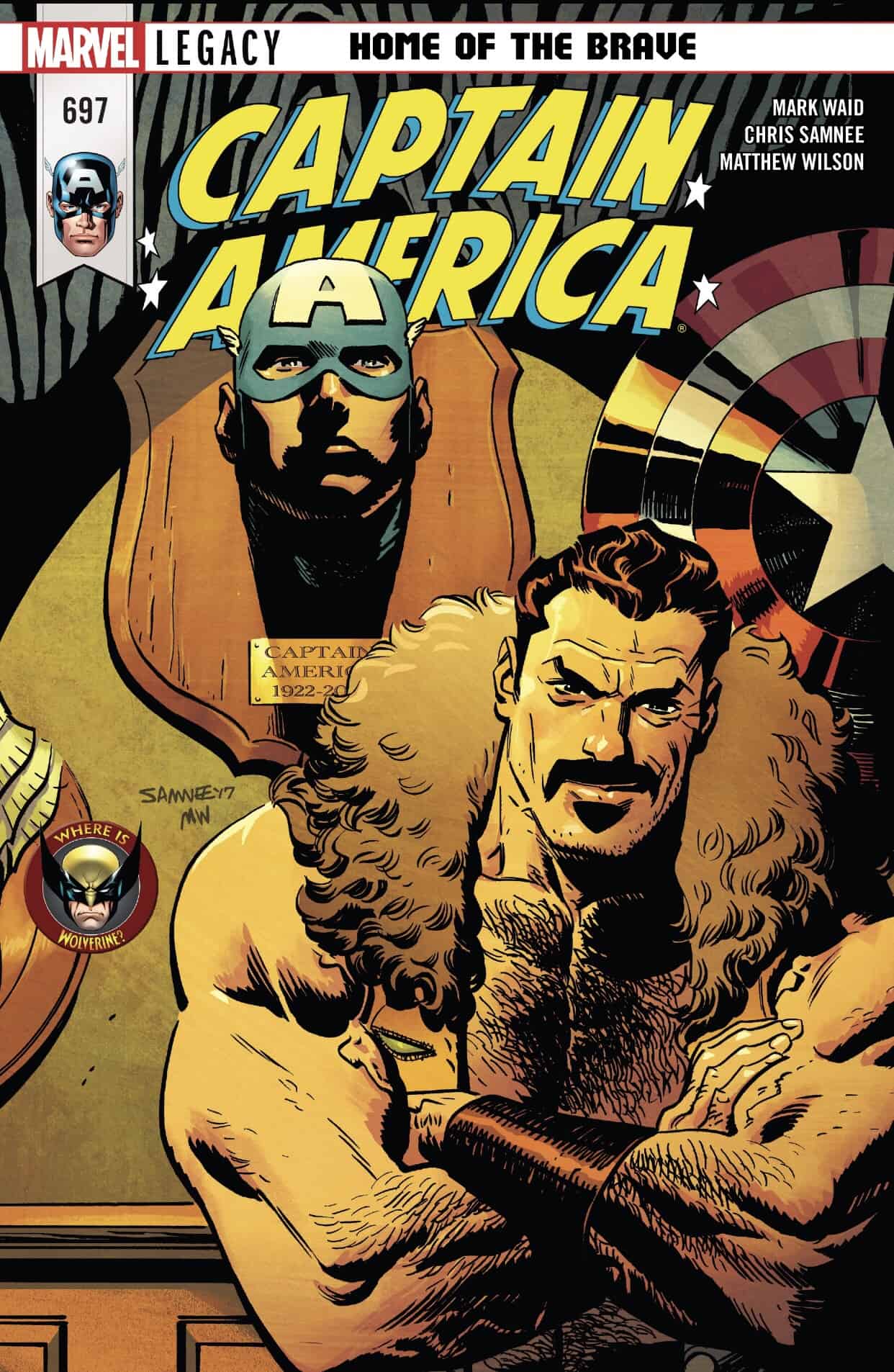 What You Need to Know: After his encounter with the Swordsman, Steve Rogers is still on the road. Still adjusting to life after Secret Empire, Captain America is determined to find his place in the world and reestablish his reputation. Having saved the last small town he was in and even getting a free lunch out of it. Things are looking good so far…

What You’ll Find Out: Even Steve Rogers needs to unwind from time to time. Steve is playing a game of pool and not even Captain America can keep himself from showing off. Making every shot, Steve shows off to the young lady he is playing until it turns out she is there to drug him and make him pass out. Captain America wakes up to find Kraven the Hunter standing nearby. Cap rushes Kraven but is stopped by a shock collar that works by keeping Cap a safe distance from Kraven. Kraven challenges Cap to make his way to the coast. If Steve can avoid Kraven and stay alive, he’ll earn his shield and freedom back. There’s one more catch, Cap also has to keep a scared civilian alive as well.

Cap first saves the young man from a jaguar, wrestling the huge predator. The civilian’s name is David Cotter and Cap does his best to keep him safe from snakes, traps and of course Kraven. They successfully make it through everything and reach the coast until it turns out, David is a trap himself. Pulling a gun on Cap, Rogers easily disarms the man. Kraven doesn’t keep his word on returning Cap his shield or letting him go free. It turns out Kraven was hired to capture Cap for some other interested party. Kraven attempts to subdue Cap but is outsmarted. Hanging from a cliff and holding Kraven from falling. Steve is about to pass out from the shock collar. Refusing to unlock Cap’s shock collar, both men fall into the ocean. When Cap surfaces, there is a high tech ship there. They fire on Rogers, freezing him in a huge block of ice. 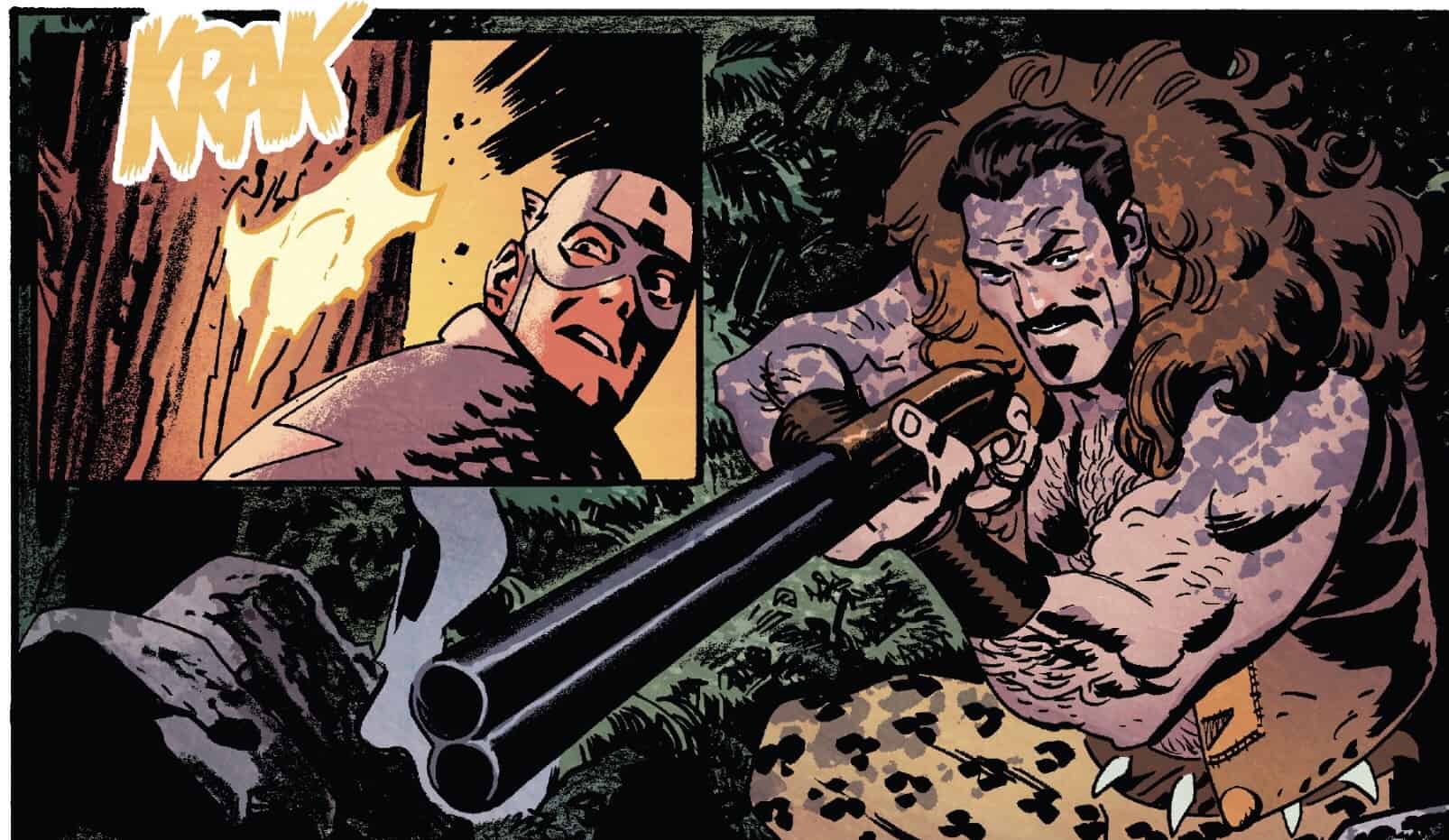 There are a few bonus pages, of Wolverine, asking a bartender if he’s seen Steve Rogers around. The bartender replies that he hasn’t seen him and Logan moves on. Yea..that’s it.

So Mark Waid and Chris Samnee are sticking with their back to basics approach. Villain captures hero, challenges hero and hero wins. Sort of. If you don’t count that some other bad guys froze Cap in a block of ice after. And those bad guys had hired Kraven to capture Rogers anyway. And I would say this back to basics thing is getting boring really quick until the end reveals him being frozen into a “Cap-cicle” again. Considering that Steve was frozen for decades on ice, I have to assume that must be a huge fear for him. So I must say I’m intrigued at where this is now headed. Waid is great at characterization when he wants to be. It’s where his strengths play best really.

Matthew Wilson isn’t my type of artist. I just can’t get over his boxy look on the panels. Which isn’t to say he’s a bad artist. I’m not the type of person to put down someone’s work based on my tastes alone. Wilson has a clear-cut style, to say the least, and it’s easy to understand the images he lays down. So for my part, I can say his style is at least clean.

Wolverine shows up for a few pages looking for Steve…don’t know what else to say on that but there it is.

Rating: 7/10. Final Thoughts: A decent issue with a better ending. Considering the first few issues of this new era was basic at best and not on the exciting side of things. It seems things could be finally getting interesting again. The part that worries me here is that Captain America’s evil counterpart was vastly more interesting. If only because it was a huge change of pace. And Waid and Samnee have their work cut out for them trying to make what’s old, new again. And hopefully, this is the first step in bringing out a more interesting Captain America.