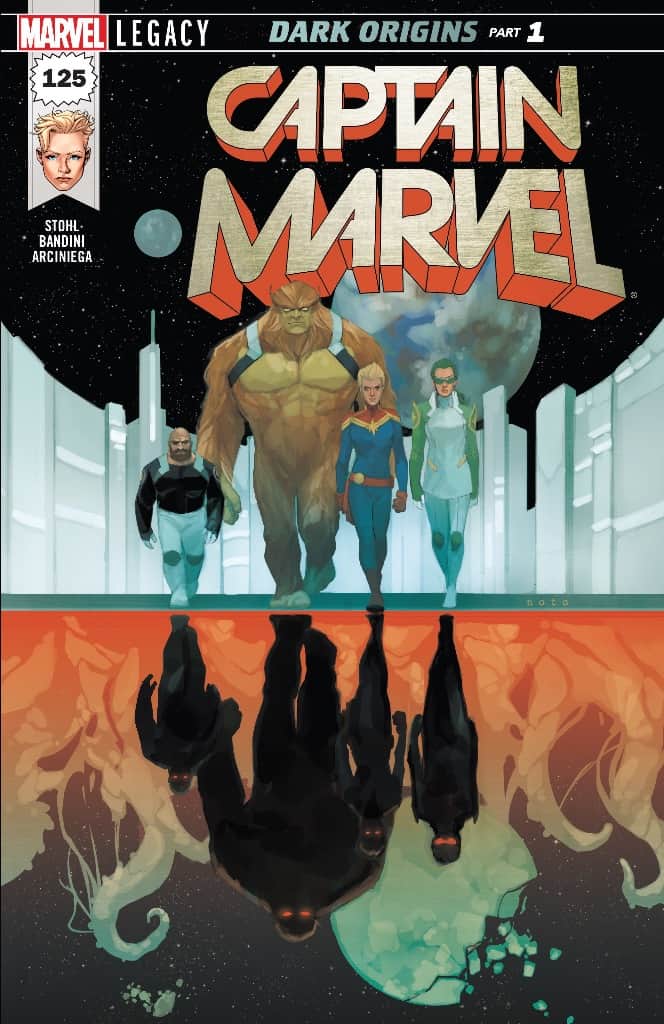 With Secret Empire ended, Alpha Flight grounded, and everyone on a paid vacation. Captain Marvel decides it is time to find Bean and bring her home!

What You Need to Know:
Due to the events of Secret Empire, Alpha Flight’s space station has been obliterated. All resources have been exhausted and its crew has been grounded. Carol Danvers is crashing at Jessica Drew’s place and Bean has been appearing to her in a new energy form. It is time for Carol to decide what is next for her and Alpha Flight. But with no base, limited resources, how will Captain Marvel and her team continue to defend the planet? Then again, perhaps their choices have already been made for them…

What You’ll Find Out:
Gathered for a debriefing by the Black Panther. Captain Marvel, Puck, Sasquatch, Abigail Brand, Hop and the cadets learn they have been forced to go on a paid furlough. Most of the team is fine with the decision except Carol, who is eager to get back to doing her job and the cadets who feel they may never get a chance to become actual Alpha Flight members. As it stands, Carol has no choice but to do as the Black Panther orders and reluctantly sends her team on vacation. Meanwhile, at the Project Pegasus Facility, a shape-shifter breaks in and steals an unknown artifact.

Later that evening Bean appears in front of Carol again and warns her of something “dark” that is about to come. Set on keeping her promise of finding Bean, Carol calls back her team in order to get back into space as soon as possible. Assembled at the Nasa Space Center, Carol informs everyone that Bean has been appearing to her. All agreeing that it is time to save their friend. They all get to work on their assignments in order to get back into space. Not long after they get started, the shape-shifter turns up at the space station and turns out to be Mim.

Thought to be dead, Mim surprises Alpha Flight and steals a vial of Carol’s blood and heads into space with the help of Dr. Eve. With Captain Marvel in pursuit of Mim, Dr. Eve triggers some kind of singularity. Captain Marvel, Mim, and Dr. Eve disappear leaving Alpha Flight with no clue as to what just happened or where Captain Marvel has gone. 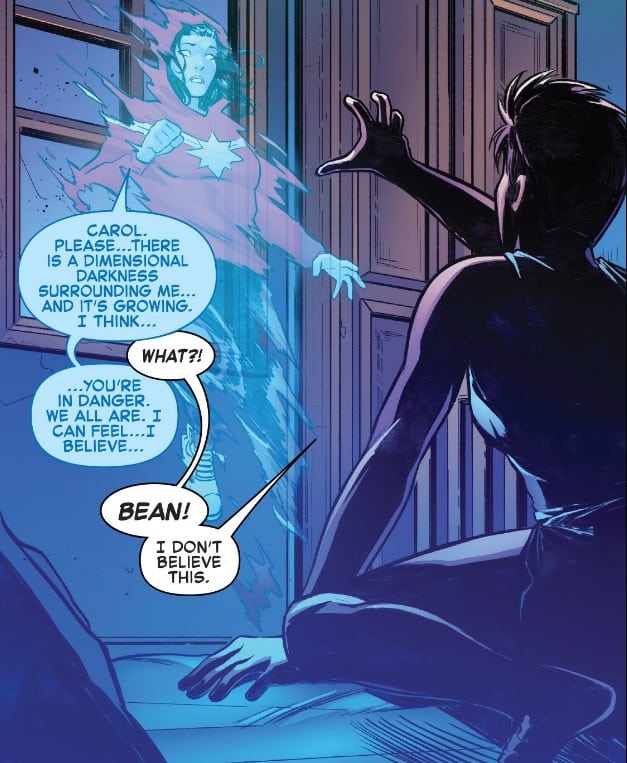 What Just Happened?
A lot! Considering this is the start of the Legacy era for Marvel. Many of the things from the previous issue in The Mighty Captain Marvel #9 were reiterated. Understanding this is a jumping on point, it is somewhat forgiving that some things had to be touched upon again in order to bring the reader up to speed. We know that Alpha Flight is grounded due to them losing their space station in Secret Empire. Bean, in a new energy form, has been “haunting” Carol. And promising to find her and bring her back, Carol sets her crew on a mission to do so. Then we have the coincidental reappearance of Mim who happens to steal an unknown object and a vial of Carol’s blood. It is a by the numbers set up the issue to get the story arc going. With Captain Marvel, Mim, and Dr. Eve disappearing into the singularity, we are “off to the races” with a new mystery.

Unfortunately, Stohl drops the ball here right from the start. When issue #9 ended, it showed Captain Marvel determined and ready to get back into space to find her friend. Cut to issue #125 and Carol is still on earth, which isn’t the problem. When the Black Panther sends her and Alpha Flight on vacation and all Carol does is take a nap. It feels like Captain Marvel is the flakiest supsuperheroound. Especially right before she goes to take a nap, Carol is explicitly reminding herself she has to find Bean. This doesn’t just make Captain Marvel, the “Mighty Captain Marvel” seem like a flake. It nearly compromises the entire character in so many ways. If this is Stohl’s attempt to make Captain Marvel one of the premiere heroes for Marvel. It is a horrible attempt as no one would believe that Superman needed a nap before he remembered there is a friend that needed saving.

On the other hand, the art is fine…as in, nothing special but nothing that screams you need to get the book either. Bandini is a good artist, simple and smooth and there is nothing wrong with that. Some artists don’t need to line every page with unrelenting detail to make their art pop or look good. Bandini doesn’t need to do that either but (and perhaps this isn’t entirely Bandini’s fault), everything on the page just looks rushed. Although that could be contributed to the writing as one moment Stohl has Alpha Flight with nothing and the next they have a space shuttle from 50 years ago off the ground. Which brings me to Arcineiga who provides solid colors but again feels like not a lot of effort was needed.

Rating: 3/10
Final Thought: Here’s the thing, when you are a consistent comic book reader, there are things you understand. One of them is “jumping on points” and what they are meant for. To bring new readers or possibly bring back readers and give them the information needed to know what has been going on. But when the very plot that was supposed to be important to set the stage for what comes next gets buried in order to retell something. It feels like it isn’t important anymore, not to the reader. And definitely not to the writer who is the person responsible for making their stories important. It certainly hurts when the main hero is made to look silly and somewhat foolish. I love Captain Marvel, I want to get behind this book because I feel Carol Danvers should be up there with the likes of Captain America, Thor, Iron Man, ect. But Stohl needs to pick up her game and stop worrying about getting a few laughs in her book and start treating Captain Marvel as she deserves. Because in my eyes, Captain Marvel isn’t the Wonder Woman of Marvel or even the Superman of Marvel. Carol Danvers should be blowing them out of the water in terms of importance.