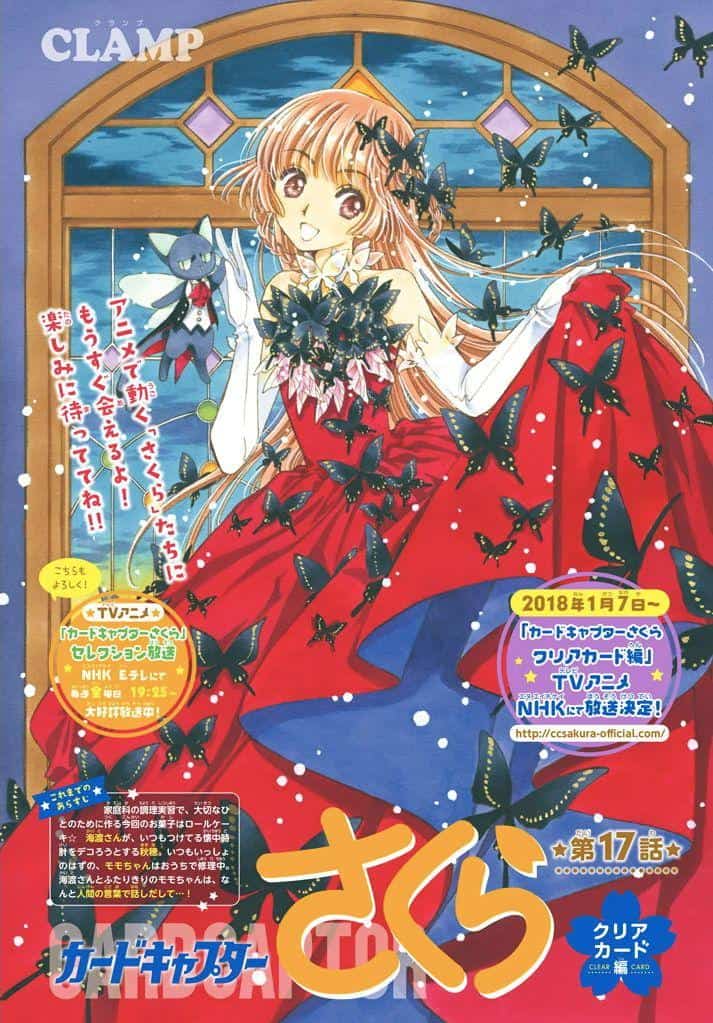 A new Clear Card appeared during Sakura’s Home Economic Class! Is she prepared to capture it without exposing herself in front of her classmates? What’s more unexpected is that it looks like the mysterious card is attacking Sakura and Tomoyo through possessing the most threating items ever, STUFFED ANIMALS!

Previously: In England, Eriol was on the phone talking to Syaoran who had been updating him on what had happened to Sakura recently. They both suspected that another strong magician is behind what was going on around her and the appearance of the mysterious Clear Cards. After their phone conversation, Kaho expressed her concern for Sakura to Eriol. He reassured her that Sakura could handle these obstacles because she is beside someone she truly loves and because Sakura is also a powerful magician. Back in Japan, Touya, Sakura’s older brother informed her that their dad would be away again for the week. After breakfast, he then suggested that Sakura bring twice the goodies if she was interested in eating them (hinting that he knows something.) Sakura then suspected that her brother might already be aware of Keroberos existence. Later that morning Sakura met up with an old classmate, Rika-chan to borrow an Alice in Wonderland pop-up book. After they split up Sakura then realized that she was almost late for school and ran. Arriving (hopefully on time) at school, Tomoyo informed Sakura that they’re baking sweets on that day for home economics. During home economics, the girls enjoyed baking and sharing who were their special someone they planned to give their baked gifts. Akiho shared that she planned to design the cake to look like a clock for her caretaker, Yuna. While Sakura expressed that she was having a hard time deciding what to design her cake. Akiho gave Sakura a suggestion to design her cake based on Keroboros. Tomoyo then points out about the stuffed toy that Akiho always carried with her. Akiho told them that she damaged that stuffed toy named, Momo and left it with Yuna back home, for him to repair. Elsewhere, Yuna was able to repair Momo who finally revealed that she was alive. Yuna and Momo then discussed a bit about Akiho and then a certain huge event/”time” that is approaching for Sakura and the whole gang!

Continuing where the last chapter left off, Sakura shared to both Tomoyo and Akiho that she met up with her former classmate during elementary school, Rika, to borrow the Alice in Wonderland pop-up book. While planning to read the book together during lunch break, their conversation was cut-off when they heard screaming from one of their classmates. That was when they had noticed that stuffed animals started to attack their fellow classmates. Sakura then hid behind one of the tables and summoned the “Snooze Card” to magically cast a spell which made everyone in the school, except Tomoyo fall asleep. 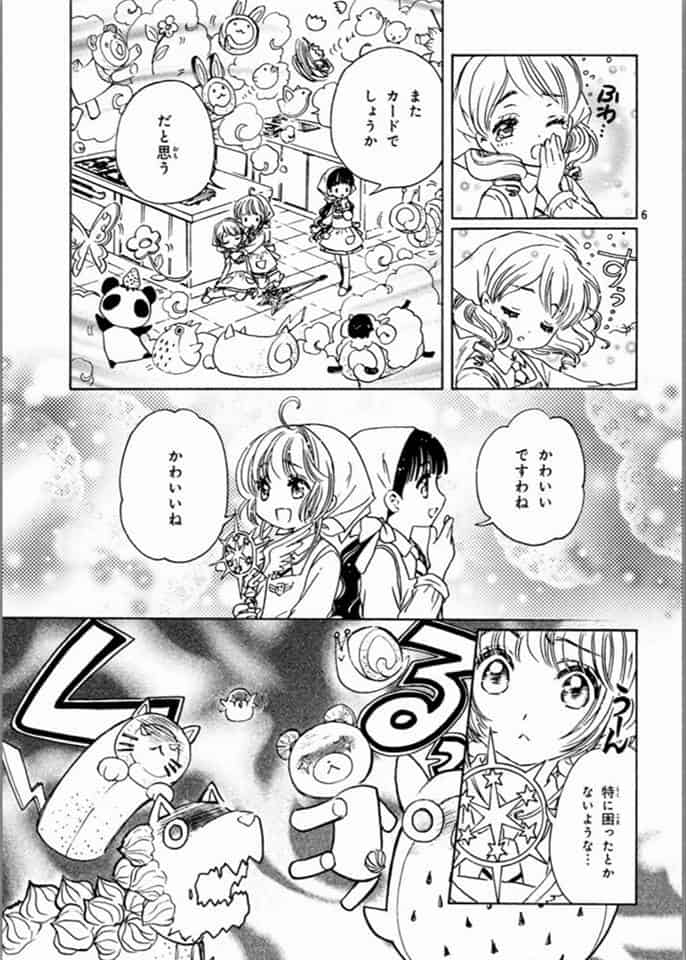 Sakura then looked at the stuffed animals and thought they seem to be not causing any trouble. She thought wrong when all of a sudden they started attacking both girls. Kero-chan noticed that something was up and suspected a new card appearing. He then went to where Sakura and Tomoyo were. Sakura warned Kero that he shouldn’t just come out in public randomly as someone might see him. Kero-chan then reminded Sakura that it was okay since everybody was asleep. Kero-chan was then surprised to see a bunch of stuffed animals chasing and attacking them. 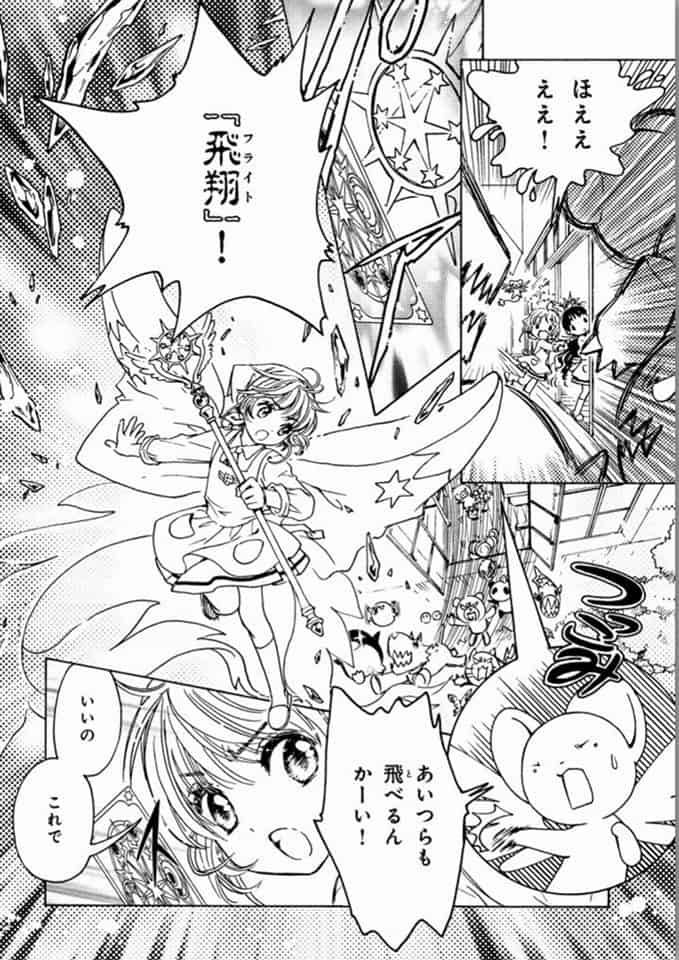 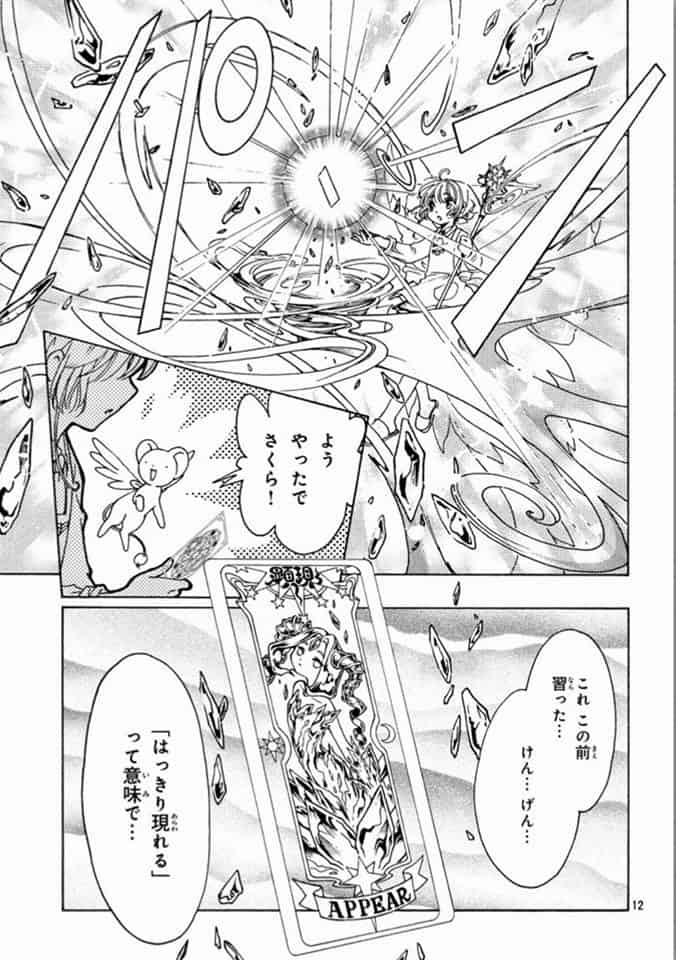 Syoaran then arrived at the scene worried, calling for Sakura. Sakura who was still airborne slowly descended toward Syaoran who apologized for not being there with her to help her out. Sakura reassured Syaoran that she was fine, they were then interrupted by Tomoyo who was capturing their sweet moment and informed them not to mind her. 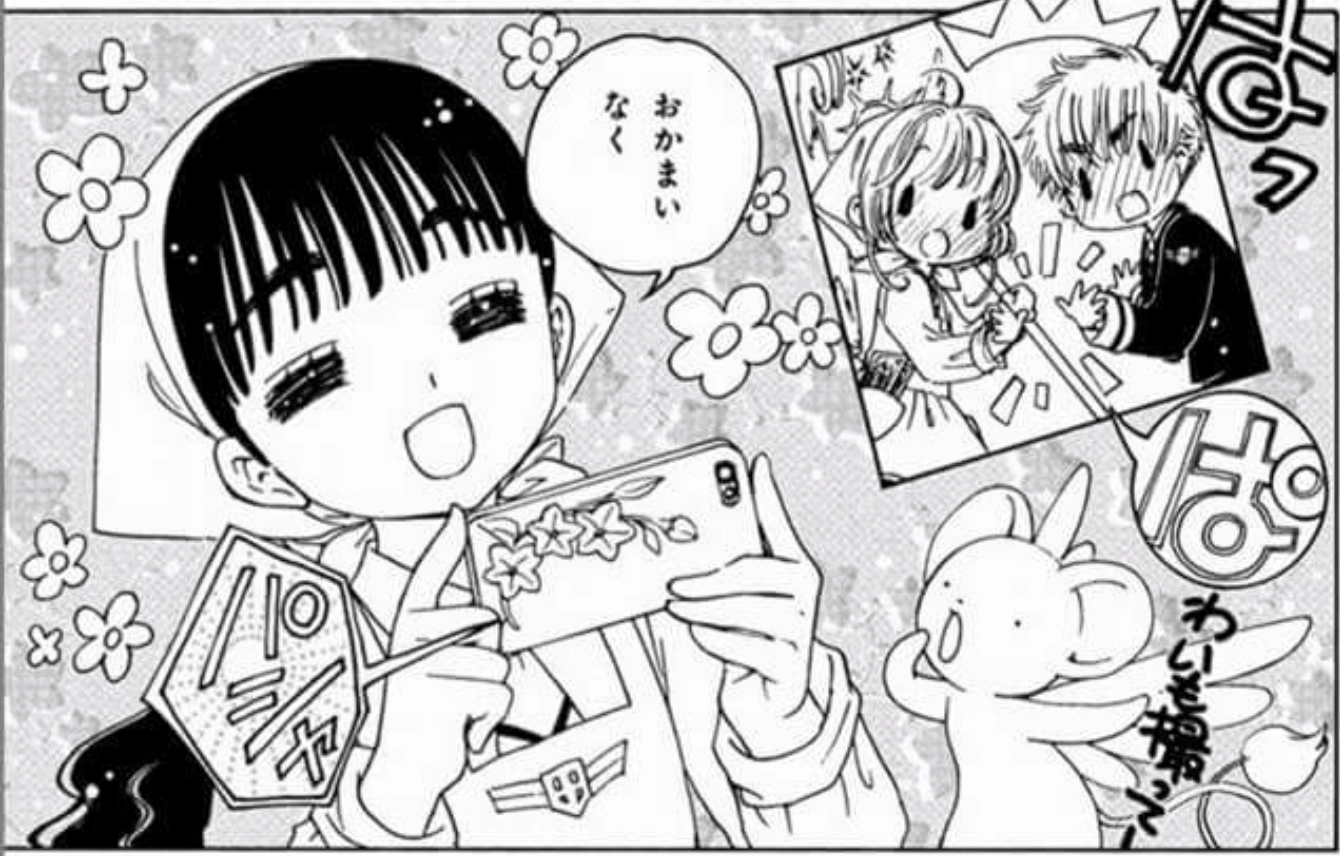 Later that day, Akiho told Yuna the strange thing that happened in school and that after she woke up, all stuffed animals, decoration and the cakes they baked disappeared. She then told him that they were able to bake new batches of cakes but they were short on ingredients due to the strange event. Akiho then paused for a bit and suddenly gave Yuna a box of cakes (one designed with flowers and the other with a clock.) Yuna told Akiho that he found the cake cute. The two then talked about the designs of the cake, specifically the clock design. Yuna then tasted a piece of the cake and told Akiho that he found it delicious. Akiho then told him that she made it with Sakura and Tomoyo. She then remembered and mentioned that after the decorations and the first batch of cakes disappeared,  Sakura looked apologetic for some strange reason. This then caught Yuna’s attention and suddenly laughed. Akiho was surprised by his reaction, to which he apologized afterward. Akiho then told him he didn’t need to say sorry and that Yuna looked very happy. Blushing, she then asked him to laugh like that once in a while. Akiho then remembered the Alice and Wonderland pop-up book that Sakura lent her and ran out of the room to grab it and show it to him. Momo then came to life and mentioned that even with Yuna’s “D” powers, he still couldn’t stop time for that “Book” which was the reason behind the appearance of the cards and why they were needed. 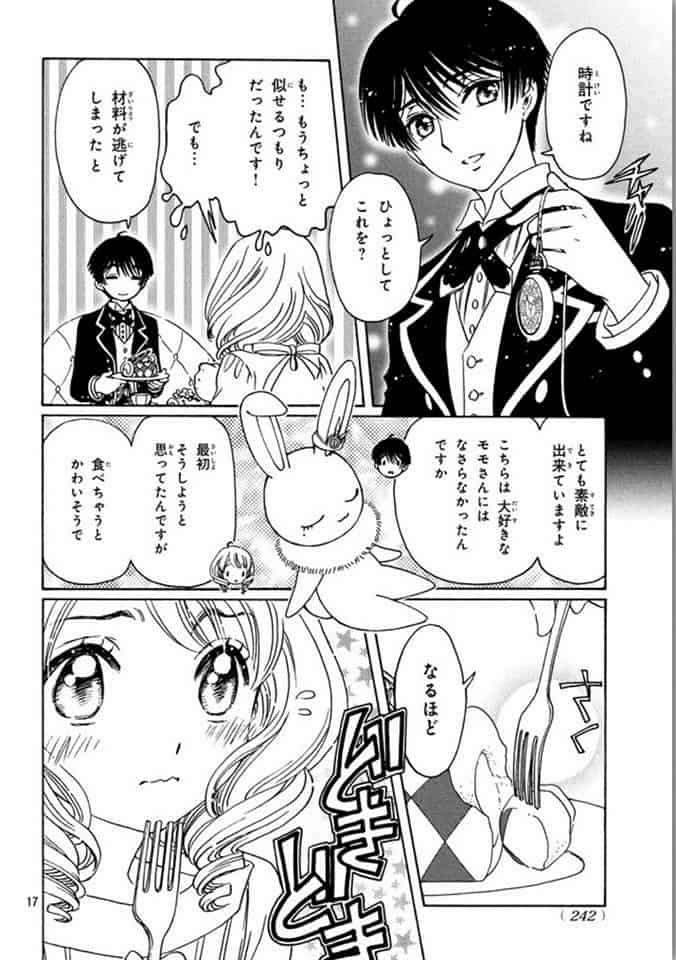 
This chapter was definitely fun! First of all, I’ve noticed that these past few chapters had been very exciting and finally providing us more information about  Akiho, Yuna D. Kaito, and Momo. Although funny, it was very nostalgic for CLAMP to incorporate the Appear Card using stuffed animals to attack the girls. I thought it was a nod to the how Jump Card was captured way back in the 1st volume of the original series (but I am speculating that there could be some connections behind the two incidents.) Plus, we finally get to see the first ever humanoid Clear Card. The art, as usual, was gorgeous and CLAMP never seizes to amaze me with their great attention to details. It’s also very nice to see heartwarming moments between Akiho and Yuna, as we rarely see both interact that much from previous chapters. Lastly, that moment when Momo talked again to Yuna regarding that certain moment or “time” that is fast approaching.  Plus some hints about Yuna’s “D” power and how it can’t match or stop that certain Book’s “time”. All in all, this was a good chapter, and I am now very excited about the upcoming chapters.

Final Thought: CLAMP delivered another winning chapter for the Clear Card Arc! With art that is consistently gorgeous and by adding new pieces of the puzzle to fill in the mystery. Fans are now getting more excited about where the story is heading.