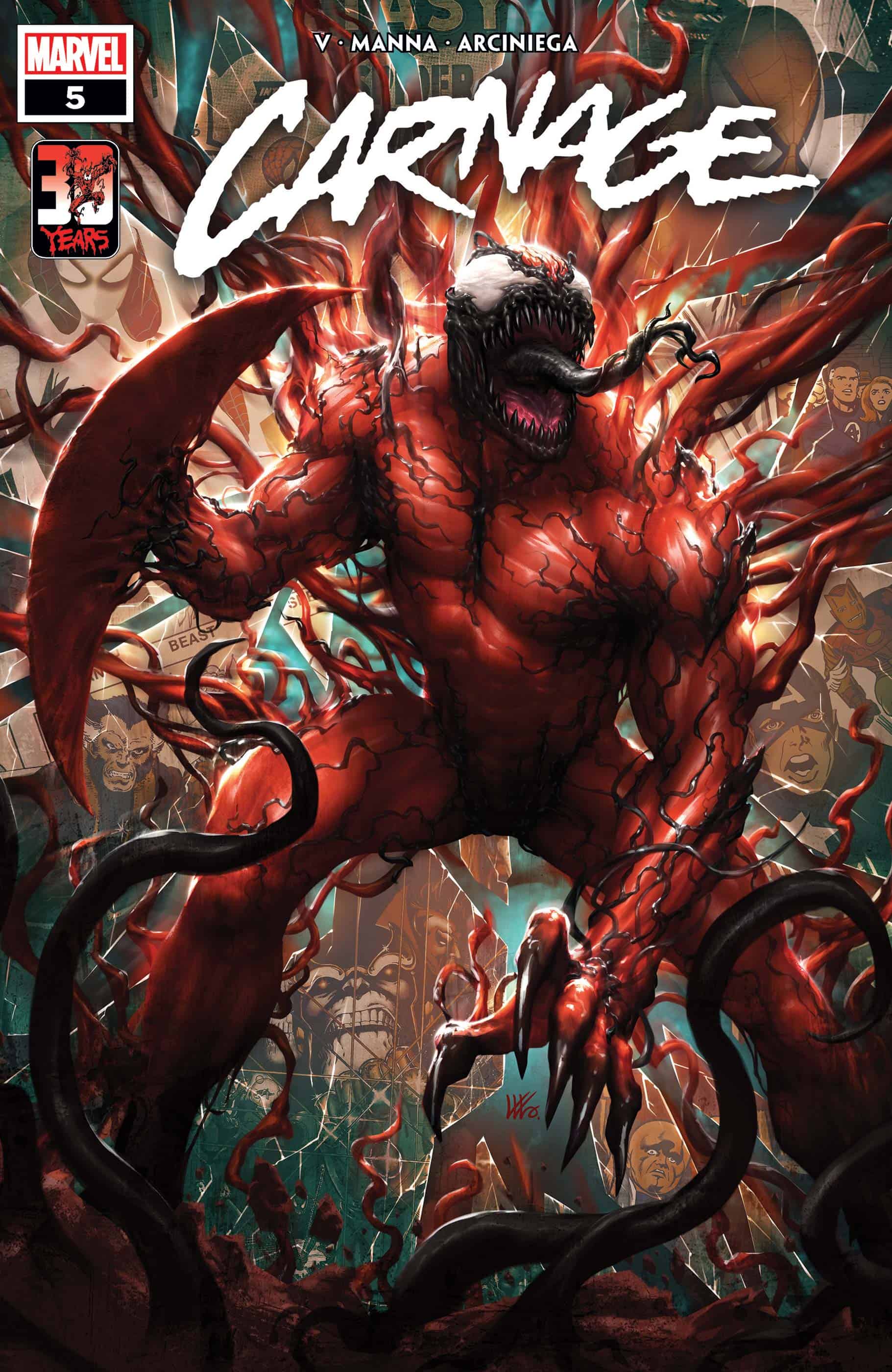 Rejected by its former host, Cletus Kasady, the carnage symbiote is on its own. It has found a disciple in serial killer Kenneth Neely. Detective Jonathan Shayde is hot on their trail. But after an encounter with Carnage, Shayde keeps hearing Kasady’s voice in his head.

After attacking and stealing the powers of Hydro-Man and the Spot, Carnage is wreaking havoc on the dark elf homeworld of Svartalfheim. But who is Carnage hunting next, and how does it connect to the ancient ritualistic hunt the elves themselves are taking on?

Ironically enough, one of the few complaints I have had regarding Carnage concerns the titular character himself. I would hope that it is not controversial to label Carnage a one-note character defined by little else outside of his maniacal bloodlust and sadistic tendencies. When pitted against the likes of Spider-Man, Venom, or any multitude of heroes, he plays his villainous role dutifully. But for such an antagonistic figure to carry their own story, they need a foil, and, unfortunately for the scarlet symbiote, these rivals tend to easily surpass him in depth. Such was the case throughout the first four issues of volume 3, where the newly introduced detective Jonathan Shayde wasted no time stealing the spotlight. Writer Ram V seems well aware of this imbalance though and has dedicated issue #5 to providing both Carnage and his meek sidekick with character development in abundance.

Stalking through the forests of Svartalfheim, Carnage dispatches a band of dark elves with ease before assimilating them into obedient pawns. The sequence adopts a tone like that of an 80’s slasher with a fantasy twist, substituting a summer camping trip with a ritualistic hunt for demigod wolves.  The symbiote massacres elves with gruesome yet energetic fury, making for some overall enjoyable action. Within this mystical realm, he sheds his identity as an extraterrestrial and becomes something akin to a demon, hacking and slashing a path towards the god-like power he seeks.

Francesco Manna brings the action and environments to life with magnificent penciling that bares similarities to the work of fellow Marvel collaborator Pepe Larraz, particularly when it comes to faces and expression. To solely compare Manna’s work to that of another artist would be doing him a major disservice though, as his style has unique qualities that shine through with the rendering of some excellent monster designs. 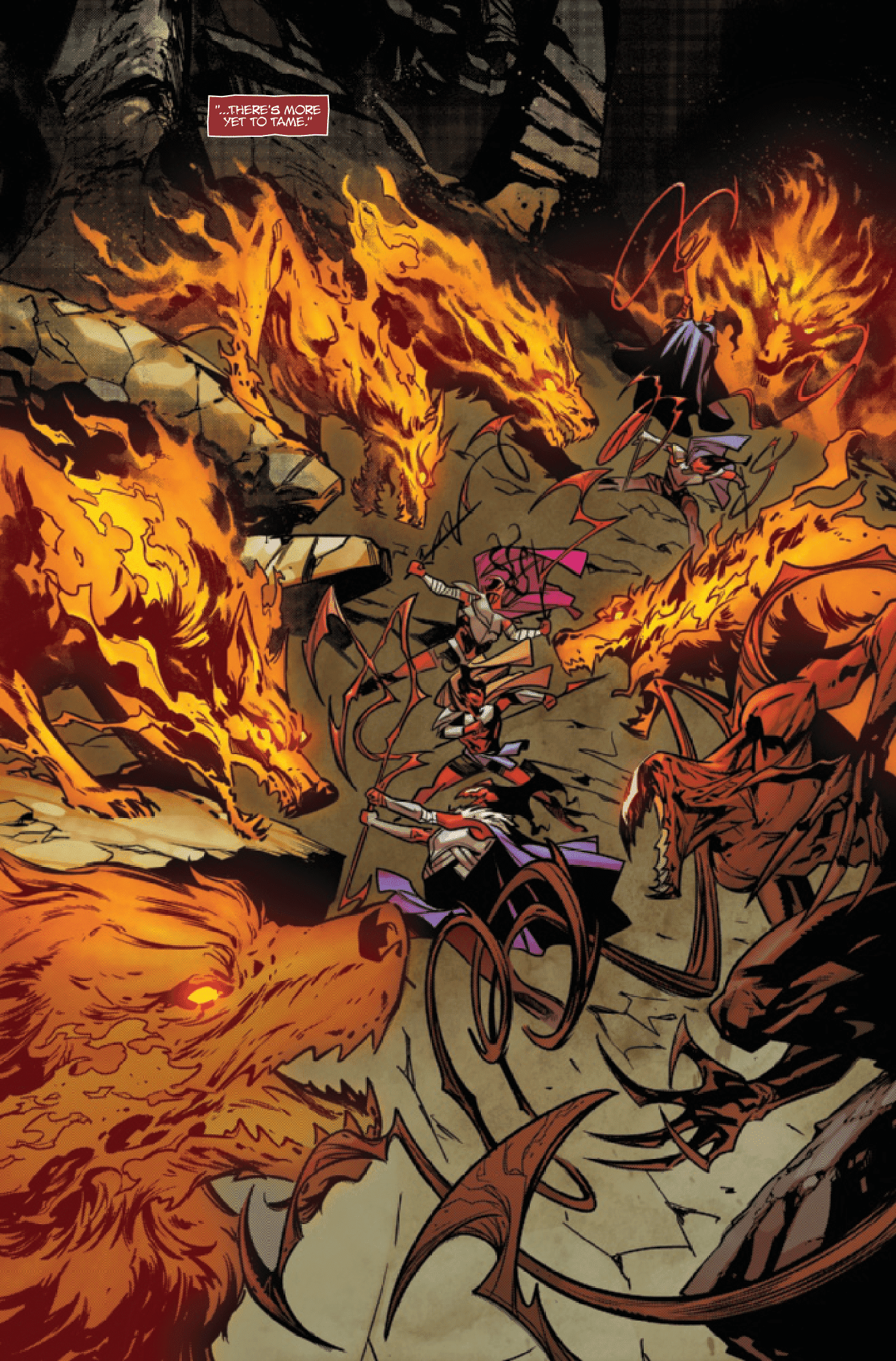 For the first time since the series’ inception, Carnage is separated from Kenneth Neely, the spineless serial killer serving as his protégé. Kenneth now follows the lead of Zeiste, a disabled pariah amongst the local elven clan. Ram V stuffs an impressive amount of nobility, determination, and heroism into the dark elf’s backstory, creating empathy for a figure barely introduced in the latter half of the previous comic. Despite Kenneth’s initial attempt on his life, Zeiste does not hesitate to trust and help him, seeing the serial killer as a misguided victim of Carnage’s influence.  And while Kenneth’s betrayal and murder of Zeiste may not be shocking enough to pluck at readers’ heartstrings, Ram V still manages to make the predictable twist have impact.

Zeiste was simply a target assigned to Neely by his mentor, and rather than reciprocate the elf’s kindness and take a stand against Carnage, he chooses to double down on his servitude. Kenneth’s window of opportunity for any sort of redemption narrows, but does not close, as the final shred of humanity within him grows melancholy. The issue wraps up with a short monologue by Carnage, offering a new perspective on the savage symbiote’s mental state and identity crisis. While the emotional revelation does not encourage sympathy towards either villain, it does emphasize how broken the two of them are while making it clear that no power in the universe will be enough the fill the emptiness within them.

Carnage #5 places Detective Jonathan Shayde and Cletus Kasady on the back burner to remind you who this comic is really about. Carnage's journey towards godhood takes a more introspective turn that may, for the first time since this series began, leave you rooting for him to succeed...if only out of morbid curiosity.