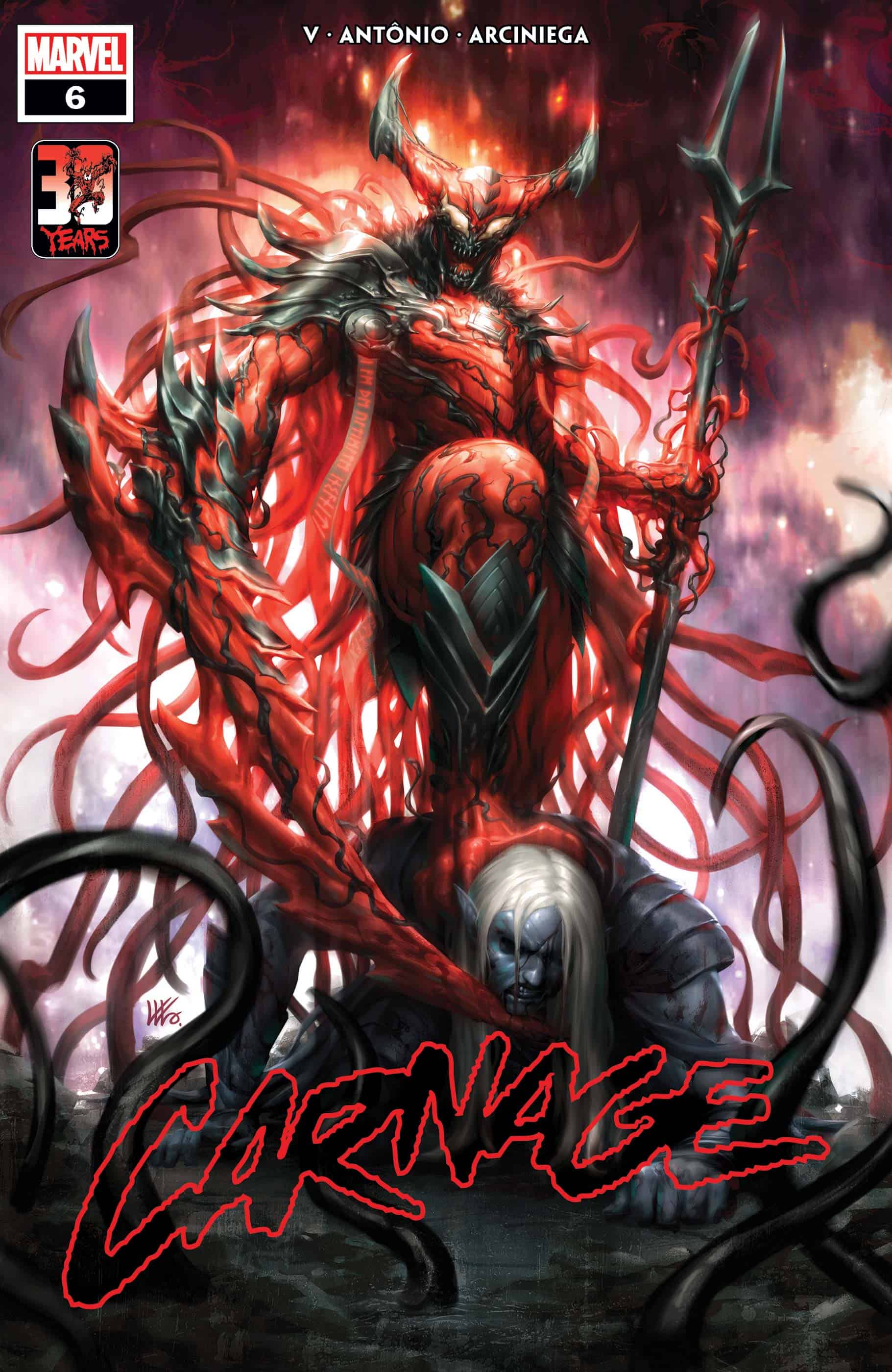 After attacking and stealing the powers of super-powered individuals, Carnage traveled to Svartalfheim and possessed one of the mythical helhounds sacred to the dark elves. Now Carnage has all it needs to take down its next victim: Malekith.

But Detective Jonathan Shayde is hot on Carnage’s trail. After an encounter with the symbiote, he’s been hearing Cletus Kasady’s voice in his head. Thanks to Cletus, Shayde knows that the only way to stop Carnage is to get to Malekith first…

This week’s issue of Carnage kicked off with a much-appreciated cameo by Hela, the Asgardian Goddess of Death. The way in which the first page bluntly thrusts you into the center of her skull-adorned throne room makes for an effective surprise, but not in the sense that her presence was unexpected. With the Carnage symbiote’s 6-issue-long quest for blood and power venturing into the mythological dominion of the mighty Thor, it was only a matter of time before the thunder god’s larger adversaries began to take notice of this foreign source of evil. Under artist Roge Antonio’s pencil, Hela’s fantastical gothic attire looks as commanding and chic as ever, with shoulder pads that will certainly have a number of veteran 90s comic fans feeling nostalgic.

Antonio excels at creating a palpable feeling of smugness and superiority through the character’s body language alone, along with facial expressions that match the nonchalant tone of writer Ram V’s dialogue perfectly.

Hela is fully aware of Carnage’s infiltration of her realm, but is not bothered by it in the slightest, viewing the entire ordeal as some sort of amusing game. The level of mischief she displays in her few moments of panel-time feels as if it was taken straight from the old Norse legends of trickster gods. Despite the briefness of her appearance, Hela proves to be the highlight of the issue and, with her introduction, Ram V adds another player onto his blood-stained chessboard. Her involvement in this narrative seems to be far from over, and only time will tell whether she has underestimated the ferocity of scarlet symbiote.

Special praise should be given to the art team’s handling of Niffleheim as they take every opportunity to populate the environment with impressive creatures. A massive serpent, a horde of sword-wielding skeletons, and a winged beast feeding off sin are all brought to life with incredible detail.

My only point of contention is in regards to Detective Jonathan Shayde’s questionable decision-making. Rather than slay Malekith and deprive Carnage of its ultimate goal, Shayde chooses to rescue the accursed dark elf and begin marching towards some nonexistent safe haven. A proper foil to Carnage should of course have morals against murder, and the detective is unaware of Malekith’s villainous reputation, but a protagonist with a complete and somewhat illogical aversion to killing can still be a tiresome trope used to stretch out conflict. However, proper execution makes even the most exhausting clichés feel fresh, and I have the utmost faith that the Carnage creative team will deliver in that department.

The scope of Ram V's story continues to grow without ever alienating the readers. For such a wild ride, Carnage has progressed so steadily that the inclusion of Norse goddesses and mythological creatures doesn't feel jarring in the slightest, which is an impressive accomplishment, to say the least.