Carnage #7: Hel in a Handbasket 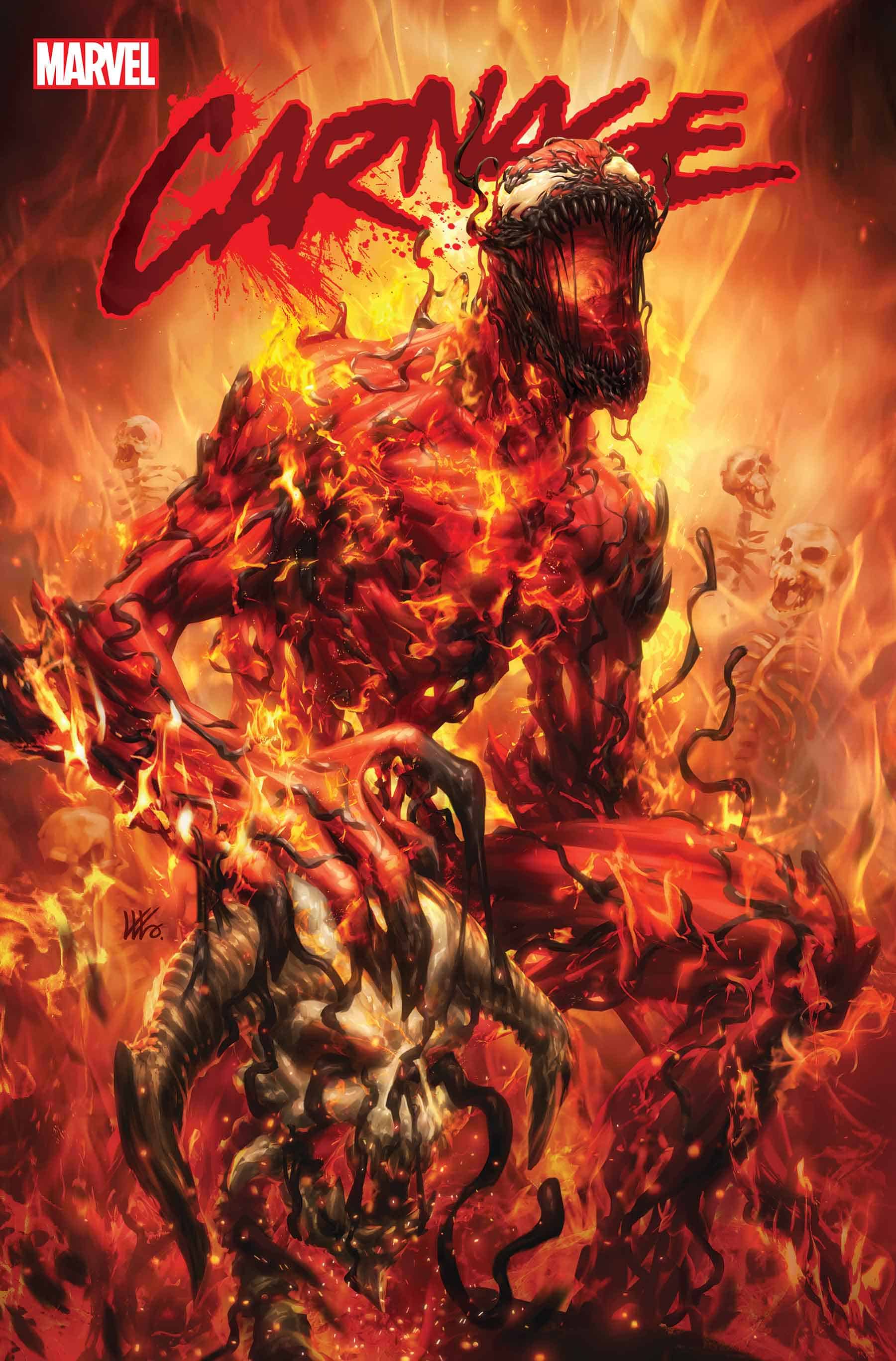 After attacking and stealing the powers of super-powered individuals and possessing a hellhound. Carnage traveled to Niffleheim to hunt down his next victim, Malekith.

But detective Jonathan Shayde, who has been aided by the voice of Cletus Kasady in his head following an encounter with the symbiote, reached the dark elf first. Despite Cletus’ urging to kill Malekith and end Carnage’s hunt once and for all, Jon spared him. Now, before Carnage and Neely’s arrival, the three must do the unimaginable: escape Hel.

It is the instances in which Ram V flexes his astonishing level of commitment to the 616 continuity that have made Carnage such a consistently enjoyable read. When it first traded the concrete jungle of New York city for the mystical forests and frozen tundra of the Nine Realms, the shift in setting left me with slight apprehension. Those feelings were quickly put to rest, of course, as soon as the series found its footing in the new, fantastical direction it was taking.

Never did it cross my mind that the intertwining of symbiotes and Norse mythological figures was not as random as initially perceived, for they had crossed paths before. Ram V makes a deep-cut reference to the events of 2019’s War of the Realms, and in doing so reveals the final piece of the puzzle that had us all questioning how Malekith the Dark Elf factored into Carnage’s ambitions.

The endless snow-covered plains of Hel do not lend themselves to a variety of dynamic backgrounds, so all artistic focus lies with the characters. Roge Antonio draws a Hel that is appropriately bleak and dull, driving attention towards how expressive his figure work really is. Under his pencil, the goddess Hela poses with nonchalant grace and offers up a surplus of mischievous smirks. The progression of Detective Jonathan Shayde’s haggard appearance is well drawn, with the red symbiote’s creeping presence on his body visually conveying how his humanity is slipping away. Shayde’s sanity seems to be fading in the pursuit of Carnage, and his exhaustion is visible in every panel.

Even the giants, who are fodder for some quick action, are given designs with enough individuality to make you feel sorry seeing them run through by the blade of Malekith. Colorist Erick Arciniega’s efforts are also deserving of recognition, as I imagine maintaining a sense of depth and dimension is difficult when coloring an entirely white environment.

Just as I had predicted, the drama reached new heights this week. Malekith does not have much respect for the brave detective who freed him from imprisonment, and seems more concerned with vengeance than escaping Hel. One would think that endless torture and isolation would humble a dark elf, but he remains arrogant and does not take Carnage’s threat on his life seriously. Jonathan Shayde is now fighting a two-front war, trying to stay one step ahead of Carnage while keeping the violent desires of his “allies” in check. Hela makes her presence known, interfering in the symbiote’s favor and delighting in the apocalypse she knows is arriving. Everyone involved has a different motivation, and there is no telling who will prove to be the lesser evil in this captivatingly twisted conflict.

Many different parties are now at play in Carnage’s quest for god-like power. Issue #7 does a fantastic job of elevating the stakes of its narrative while maintaining focus on the lone detective stuck in the middle.

Carnage #7: Hel in a Handbasket