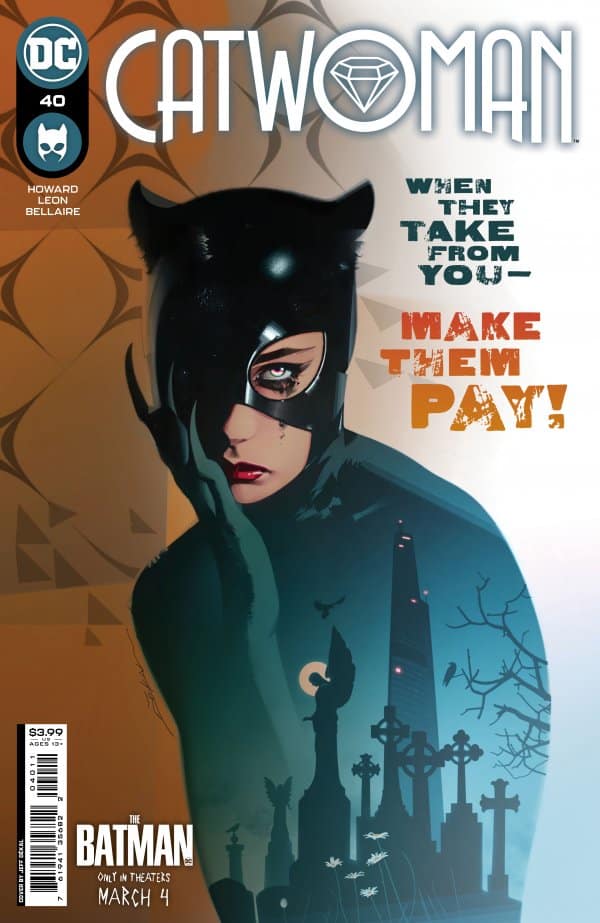 If I told you that there is a whole retro-glam apartment building in Gotham called the Trixie that houses mob wives, side chicks, and mistresses, and Catwoman has secretly taken a whole floor to herself eavesdropping on mob wives and mistresses to blackmail them, would you believe me? Of course you wouldn't, because the last thing you want is to be caught knowing those truths at the only place in Gotham you can actually get away with murder.

I have to start this review off by just gushing over the cover art by Jeff Dekal. The art evokes such a morose feeling yet remains beautiful to look at with Catwoman’s silhouette filled with a graveyard and flowers. Catwoman looks stunning on it even with teary mascara dripping down her face. She also has a bit of Michelle Pfeiffer going on which is my favorite incarnation of the character, so I am loving it.

I was so pleased last issue to see Catwoman help innocent women who were caught in the crossfire of her battles with Black Mask and other Gotham crime bosses that I actually got a little angry when, in just the first couple pages, one of them was killed out of spite. Catwoman finds Kristi, who helped her that night, dead in her bed. I felt Catwoman’s anger at the life lost as so often women, especially sex workers, are treated as completely expendable. Of course, Tini Howard also kills off Kristi, but there’s purpose to her death and we’re able to see Catwoman grieve over someone she barely knew.

This chapter is all about revenge, and Catwoman is craving it after finding Kristi dead. We see the Tomasso family again, and Catwoman manages to coerce Don Federico’s son Dario into helping her. It’s an uneasy alliance, but Catwoman has secrets on the Tomassos and also learns new ones along the adventure. I really enjoyed the characterization of Dario, who could easily be a generic mob boss’s son. He seems to have a modicum of intelligence and maybe a little self-preservation. Catwoman’s reaction to each of the unfolding events were the same as mine, and it’s so nice to see a compassionate side to Catwoman. We saw it last issue, and it continues with this one. I’m really excited to see this side of Catwoman explored in future issues.

The art by Nico Leon is fantastic once again. However, there’s one scene with a startled Catwoman that felt very anime-esque and inconsistent with the rest of the story. I wouldn’t be opposed to Leon sprinkling a few more panels with those exaggerated expressions, but just one seems a bit odd. Jordie Bellaire still provides some of the best coloring in the business, and I’m gaga over her highlights of Catwoman’s motorcycle lights. I need that neon pink all over my house.

Tini Howard, Nico Leon, Jordie Bellaire and Tom Napolitano are absolutely killing it on this run of Catwoman. It's only been two issues, but I can't see the series going anywhere but up with this level of storytelling. Catwoman is compassionate while remaining sassy, fun and badass.