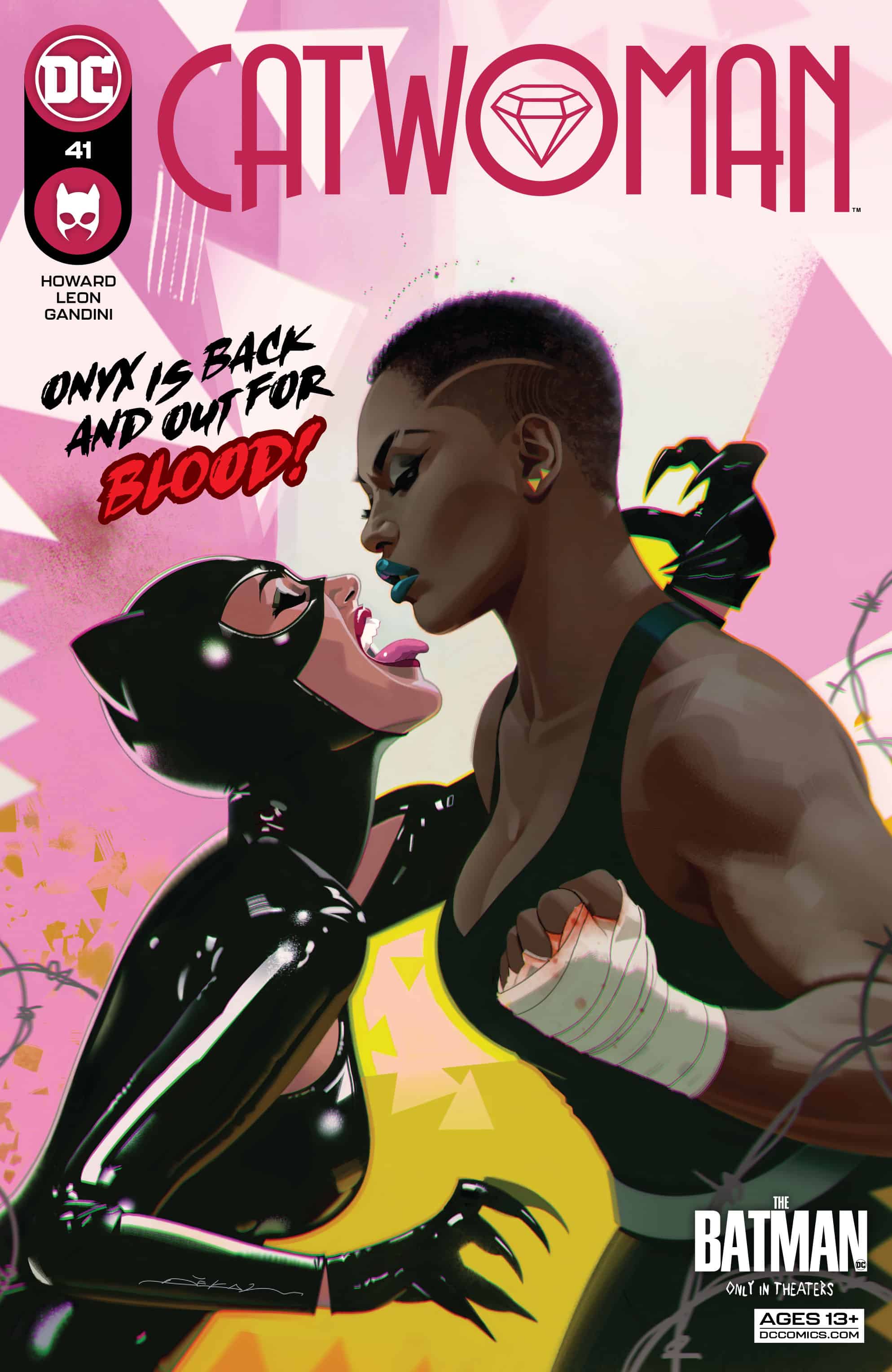 With Batman out of the picture, Catwoman would be wise to remember that there are more than bats in Gotham’s belfries. Speaking of bats, Onyx returns to her home city to bat cleanup and make sure Catwoman’s not letting any strays into her city...and with no big Bat in the shadows, those pesky no-killing rules are off the table. Let’s see if Catwoman and Onyx can agree on a target…

Catwoman is having a great month. The Batman has returned the character to the spotlight which really amped up my excitement for reviewing Catwoman #41. And my excitement was matched with the fantastic third part to the “Dangerous Liaisons” storyline. When we last left off with the heroine (let’s not kid ourselves at this point, Catwoman is a straight-up hero), she was kinda/sorta teaming up with the son of one of Gotham’s five primary mob bosses. As we learned last issue, Dario is gay and in a relationship with his best friend Noah, who just happens to be Dario’s father’s right-hand man. The issue culminated in Catwoman revealing that Dario’s father plans to replace him with Noah, who is fully aware of the plot.

Betrayed by both his family and lover, Dario feels like his death is right around the corner and will do anything to try and go out while doing something that matters. This adds a really interesting and complex dilemma for Catwoman, who has a habit of taking in strays. Catwoman reassures Dario that he’s going to live which was a really touching sentiment if he didn’t have “DEAD” written all over him. Tini Howard may surprise us and have him end up surviving, but Catwoman doesn’t have a great track record of her allies surviving. I’m personally a big fan of Dario. It’s refreshing to see an unconventional gay character, not some white twink like we’re all used to seeing. 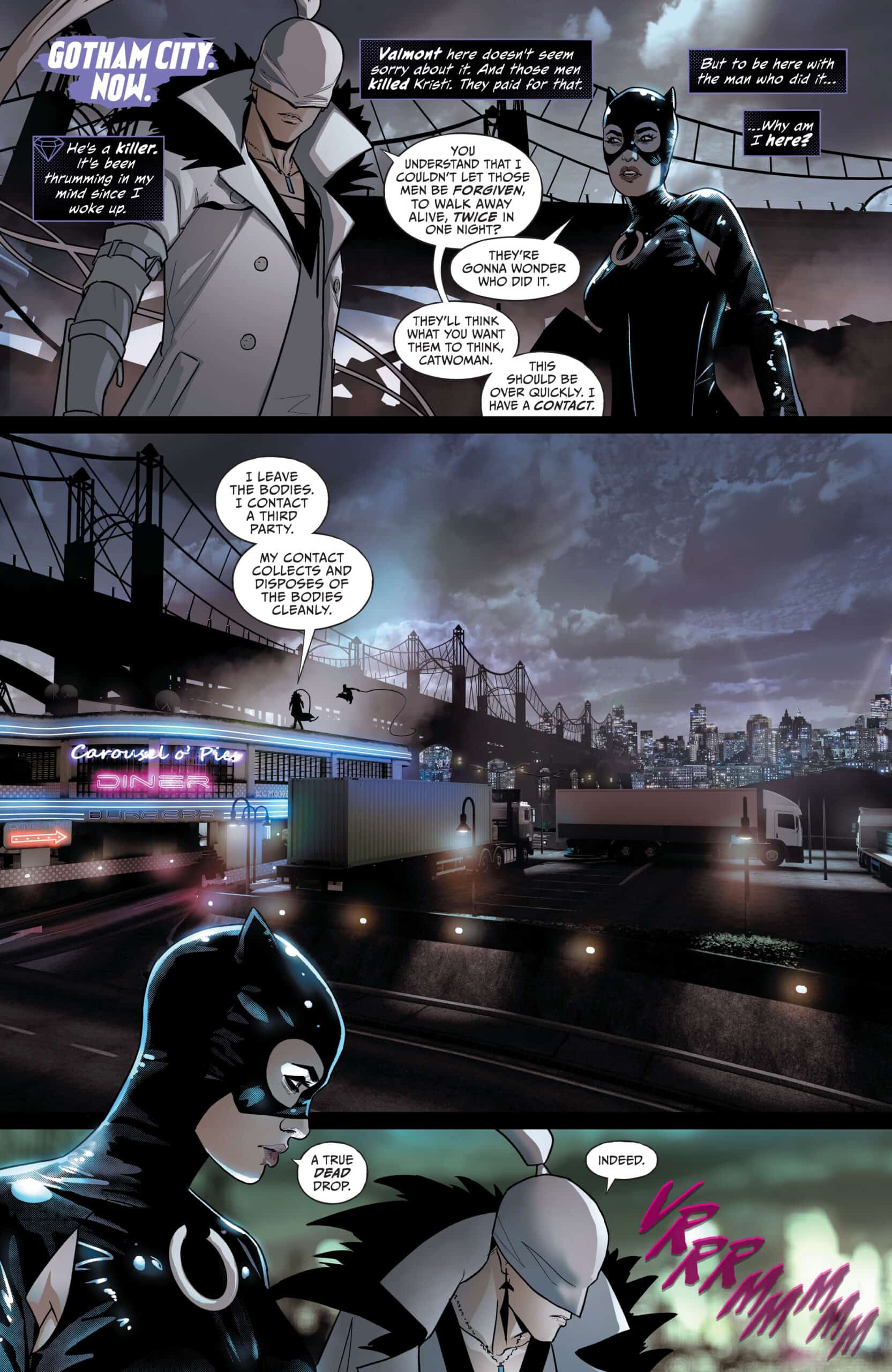 There’s also the entrance of Onyx for Catwoman to worry about. I only have passing knowledge of Onyx, but I’ve always loved her design. And she looks just as good here. She’s testing Catwoman after seeing her associating with Valmont, aka murderous Tuxedo Mask. I was less interested in the Catwoman/Onyx banter than I was with the Catwoman/Dario stuff, but it was fun. I was really surprised and taken aback how violent Onyx was with Sullivan’s thugs. She won’t kill criminals, just completely smash their arms to bits. Strange gal, that one.

The last of the big plots involves Black Mask, who I can’t say I’m really impressed by thus far. He spoke a lot in this issue but said very little beyond “me kill Catwoman”. I’m with Eiko on this one – spare us the theatrics, Sionis.

Nico Leon continues to provide excellent penciling for Catwoman, this time backed by colorist Veronica Gandini. Gandini matches the book perfectly, and I genuinely didn’t know Jordie Bellaire was absent from it. The last page in particular really gripped me visually. Coloring has been such a pivotal aspect of this series so far yet I’m always surprised how great each issue is.

If you're still reeling from Zoë Kravitz's stellar performance as Catwoman, this series by Tini Howard and Nico Leon is a perfect entryway into the comic version of the character.