Catwoman #43: Everything Has Value, So I Want It All 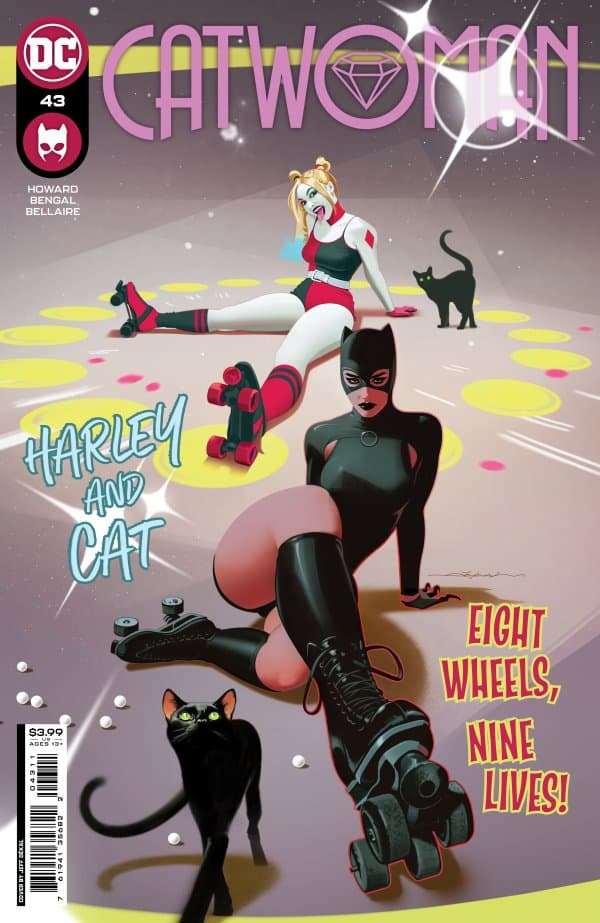 VROOM VROOM! We all have that friend we call when we want a wild girls’ night out-and for Catwoman, that friend is Harley Quinn. It’s a night of hip whips and hot laps at the roller derby, complete with a little road-trip crime. It might even be the type of girls’ night that gets sealed with a kiss, if Catwoman’s allies back in Gotham can hold down the fort while the Cat’s away…

Catwoman needs a break, so she calls up her gal pal Harley Quinn for some classic Harley hijinks. Unfortunately, this means slamming the breaks on the stellar story Tini Howard and Nico Leon have been working on in favor of a Harley Quinn romp that just doesn’t work out. It’s a shame as I was greatly enjoying what Howard and Leon were putting out. But the story comes to a complete halt with this issue. Gone are Dario Tomasso, Valmont, or Onyx, and instead is simply Harley Quinn (and Duchess, to be fair!).

I’m going to say something controversial: I don’t care for Harley Quinn. At least, not the current Harley Quinn that DC Comics has been pushing for over a decade now. Harley works best for me in doses, as that manic energy can be exhausting to read. Batman: The Animated Series utilized her well, but that’s largely credited to her voice actor, Arleen Sorkin. We don’t hear that brilliant voice in the comics, and it feels like so few writers are capable of writing the character. It’s no different here, as the story feels editorially-mandated by DC to boost sales.

The story itself is very forgettable until it reaches the cliffhanger ending which brings one of my favorite female villains from the animated series into the Rebirth continuity. No, it’s not Baby Doll unfortunately. But it’s our second best choice: The Red Claw! I was disappointed by most of the issue, but I do feel the promise of Red Claw next issue is enough to pull me back in.

Nico Leon is replaced with Bengal on art for this story arc. Bengal’s art is perfect for Harley Quinn, but for Catwoman? It matches the wacky story, sure, but I really felt myself missing Nico Leon. There’s also a weird sexualization of Harley Quinn in Howard’s script which clashes with Bengal’s child-like art style. I wasn’t a fan of Catwoman slapping Harley’s ass or Selina calling her the “cutest thing alive.” This is a grown woman with a PhD. But that isn’t a criticism exclusively for Howard, as DC has been focusing on this aspect of Harley for a while now.

I love a good gal pal story, but this issue felt like a completely different series from what Tini Howard and Nico Leon created a few months ago. I'm not sure if DC Comics pushed Harley Quinn onto the creative team or if Howard chose to bring in ol' Killer Quinn herself, but it didn't work. The cliffhanger brought my excitement back for the series, however, as it features the first appearance of a villain who originated in Batman: The Animated Series, much like Harley Quinn did.

Catwoman #43: Everything Has Value, So I Want It All