Retconn has infiltrated and altered the DC Universe, and Cave Carson sends out a distress beacon to any hero he can. The question remains, where is Cave Carson and how did he rope Swamp Thing into this? Has he fallen into the intolerant lactose clutches of Retconn? Have I already used this joke in a previous Milk Wars review? Only time will tell. 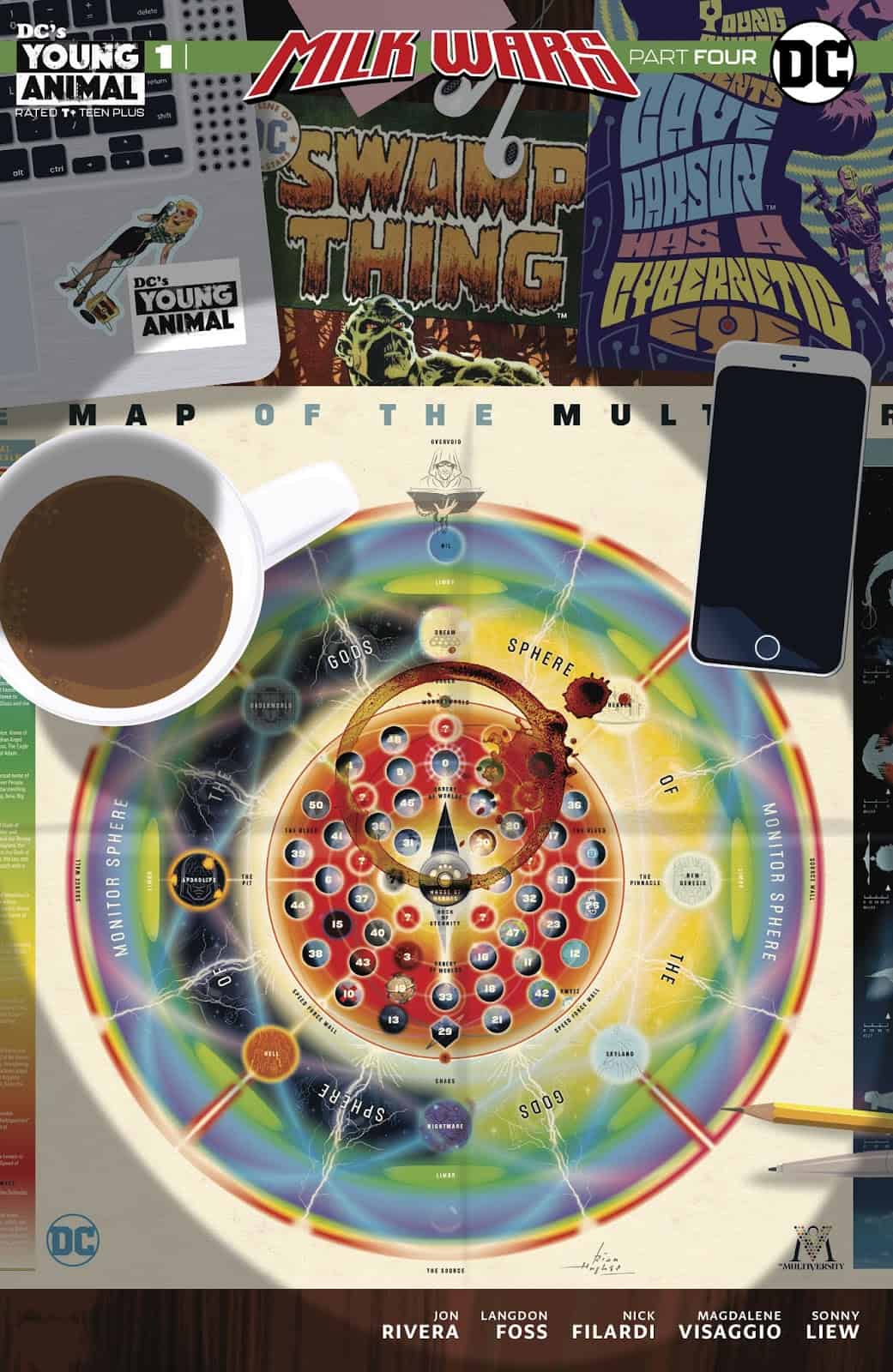 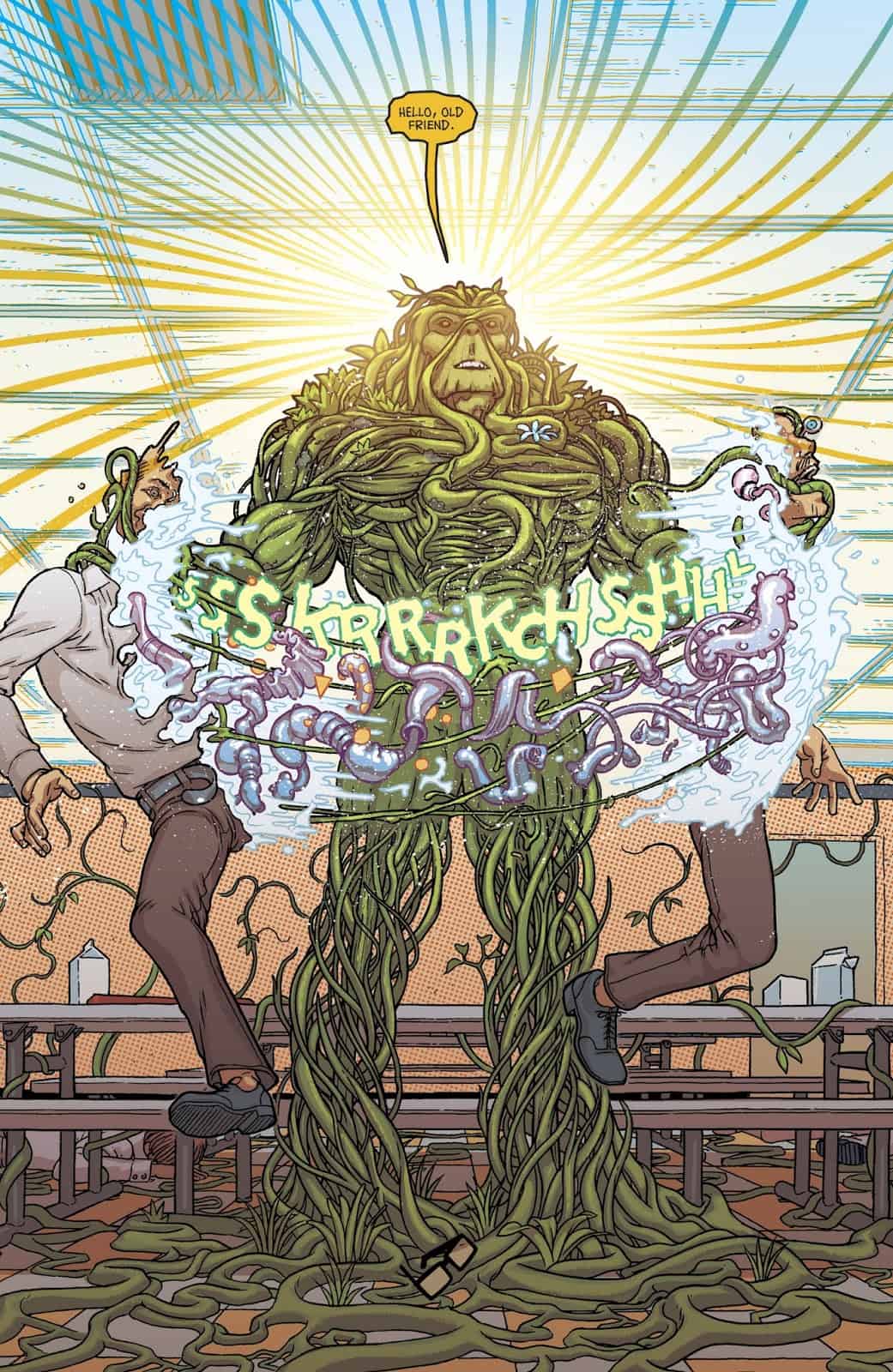 What You Need to Know:
With the psychic milk flowing through the multiverse and heroes like the JLA, Wonder Woman and Batman breaking free of its grasp, they all receive a distress beacon from Cave Carson’s eye. With help hopefully on the way, Cave Carson’s fate remains in doubt.

What You’ll Find Out:
Cave Carson, sans his cybernetic eye, is trapped in a seemingly never-ending world of cubicles and fluorescent lights. He is in Retconn. His daughter Chloe is distributing Retconn’s rancid brainwashing milk to all the other employees there and brings one to Cave. With the milk upsetting his stomach, Cave decides to go on a break, taking his daughter and Mad Dog with him. In the break room, his cybernetic eye suddenly reunites with him, and he is wildly compelled to eat all the vegetables he can find. He then vomits up an upsetting amount of vines and they attack everyone around. The vines form plant versions of Cave, Chloe and Mad Dog and eventually Swamp Thing. Swamp Thing destroys the milk driven office supervisor and restores the three to their flesh bodies. Together they fight their way to the archives to find out what’s going on, and after seeing another glimpse of Rita Farr, Cave discovers that Retconn is strip mining humanity’s reality to sell it off. In the midst of this, however, they are attacked by bizarre Funko Pop-esque monster dolls. Swamp Thing saves them from these little terrors, but Wild Dog has been captured and reprogrammed by Retconn. Together they fight him off and break Retconn’s programming and they got to the Human Resources at the center of Retconn. Quite literally using human beings as resources, Retconn siphons off their lives and dreams, “homogenizing” them all. Swamp Thing connects them to their collective minds, and they decide to disconnect them to end their pain, killing them in the process. Shaken by this, Cave tells Swamp Thing to get Mad Dog and his daughter out of there and stays behind to face the monsters of Retconn. 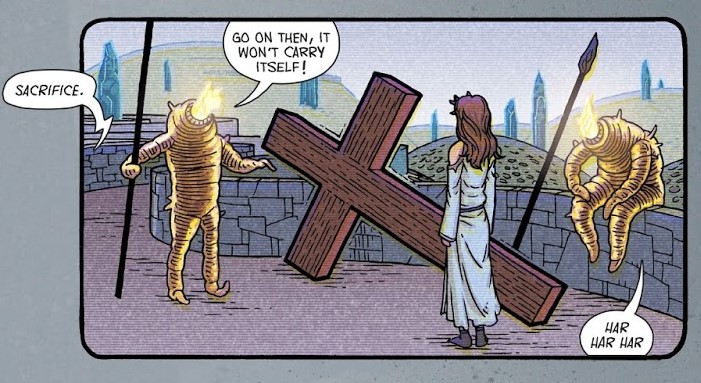 What Just Happened?
After seeing the distress call in all the other issues, it was good to finally see what Cave Carson was up to this whole time. Rather than really swing for the fences out of the gate, the comic opens in a completely drab and mundane environment. This really drives home the effect of Retconn to me and makes the eventual chaos and carnage that he inflicts on them much more gratifying.

The art also really sells Retconn’s presence to me. Until Swamp Thing bursts forth and Cave breaks free from their control, the colors are very beige and muted, and the panels are drawn almost as if they are slightly out of focus. As soon as the control is broken, everything becomes brighter and the lines become sharper. It’s a really cool effect and it totally caught me off guard in a fantastic way. No other issue in the Milk Wars has displayed Retconn’s influence as clearly in the art and I really enjoyed that.

Overall, this issue suffers from the same small problem that all the previous ones have. As a reader, we are thrown into the middle of something clearly huge. I have loved all these characters and even with a giant-sized issue, I feel like we never really get the full story. I am sure this is by design, but I still find myself wanting more. Ultimately, I guess it’s a good problem to have.

Final Thoughts:
Another weird entry into the Milk Wars, but one that is very fun and fills in a lot of gaps in the overall story. Essential reading for the Milk Wars, and all around a solid issue.