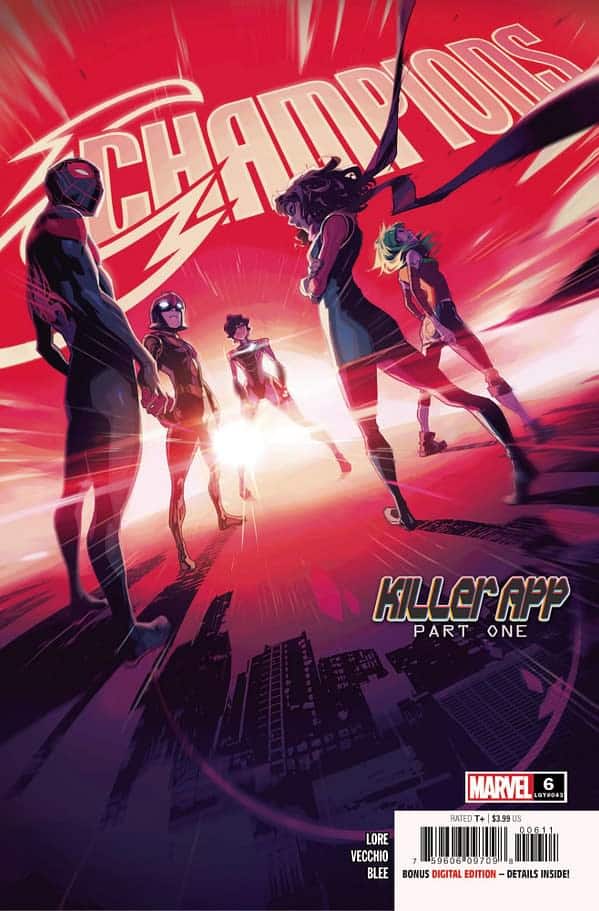 The Champions tried fighting fair. Now it’s time to fight dirty. A sinister corporation is cheating the system to try to keep Kamala’s Law on the books, so the Champions infiltrate the company to take it down from the inside. But the company’s wildly popular app is already turning public perception against teen super heroes. Can the Champions wage war on a trend? And how dirty will their hands get before it’s over? Danny Lore (CAPTAIN AMERICA: KING IN BLACK, IRONHEART 2020) and Luciano Vecchio (IRONHEART) take the reins of a daring new era of Champions!

This issue provides good commentary on how there are corporations that only care to make money off of a certain target audience when appealing to them. With the presence of social media being so interconnected into the lives of teens and young adults, companies will do as much as they can to make money from this demographic.

Throughout the issue, we see moments where Riri shows frustration towards Roxxon’s actions and the past decisions of her teammates. I really did enjoy when Riri points out to Kamala in how she avoids the phrase “Kamala’s Law.” It’s very clear from Kamala’s perspective how it’s embarrassing to have her name in that law.

In the exchange between Riri and Viv I definitely see both sides to that complicated relationship. Riri still feels betrayed from what Viv did, and Viv still feels regret. For a character that isn’t human, I love the decision to show that she can be as flawed as a human that can make mistakes. She feels guilt more than a lot of humans do. More emotional awareness than the people running the scenes behind Roxxon. It was a sweet touch to end that scene with Kamala showing unconditional support for Viv going forward. Writer Danny Lore does a phenomenal job in setting up this scene for Viv.

I like the decision to have Kamala going through a Roxxon store and seeing how a corporation that targets teen heroes is now selling overpriced t-shirts and other items. Making money off of teens while making life incredibly restrictive for them is absolutely a slap in the face. Corporations can present themselves as companies that falsely support groups of people when they only care about making lots of coin from that target audience. Kamala is able to see right through their intentions with the store finding concern for Roxxon’s true end game goal.

The art does a really great job at making each character stand out. Vecchio is incredible with drawing the team. For a series that focuses on a teen group of heroes Vecchio’s art style is a great fit, and I absolutely adore the way they draw Riri. The coloring stands out for me more for the characters. The way Blee does the colors for Riri and Viv are a huge highlight in this issue.

Lore sets this team in the direction in wanting to take down Roxxon and their negative influence over social media. We see the team trying to work through their unresolved conflict from the previous story arc, while facing their tyrant of a target. This creative team shows that these characters are nowhere near perfect, yet they won't give up in getting justice for how they have been wrongly treated. It's very clear that this team has a soft spot for Riri and I'm very excited to see their plans for her and the rest of the team.