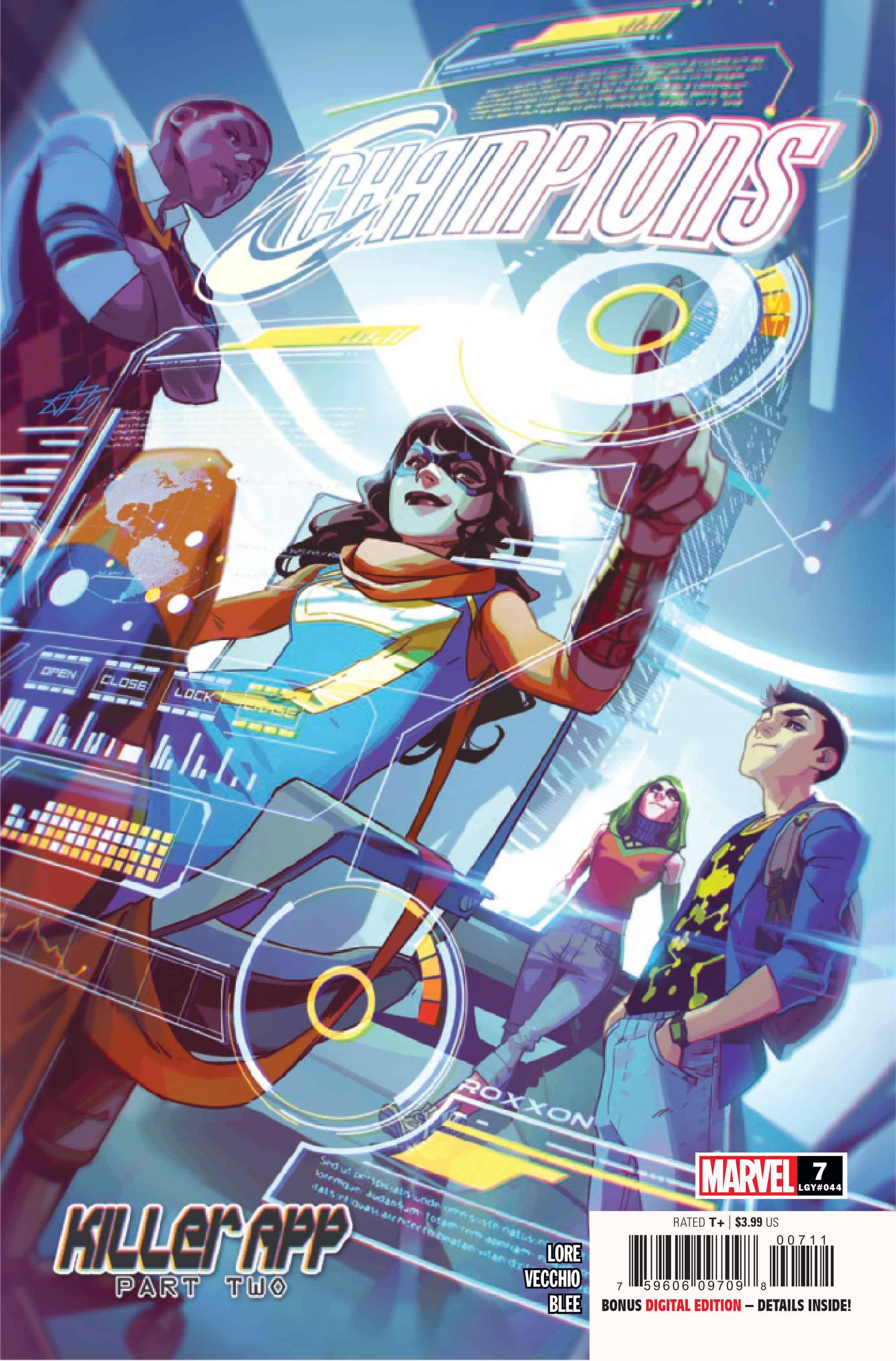 CHANGE THE WORLD! THE KAMALA CON! The Champions are playing dirty to beat Roxxon at their own game—including implanting two of their own as interns to take down the corporation from within. But in order to earn the trust of their cutthroat Roxxon supervisors, they’ll have to deliver an unwilling spokesperson: Kamala Khan. Will Ms. Marvel agree to become the face of a company and a law that she hates, or is it too high a price to pay for victory?

Champions #7 delivers a story about kids being kids. The whole premise of the “Outlawed” storyline was to show how age was not a barrier to the Champions being heroes. And the second issue of the “Killer App” arc makes no moves to go against this – it all shows that being heroes doesn’t change that they are still kids. It’s done explicitly with unfortunate parental interruptions and digs against millennials (ouch). But it’s also more subtle as we see the interactions and struggles of the characters.

Despite the limited space, writer Danny Lore handles the cast of characters with care. We see it in the arrogance and earnestness of Nova and Mrs. Marvel’s leadership and actions of her teammates- especially Nova. Meanwhile, the interaction between Viv and Riri showcases their personalities while their conflict or eventual resolution continues to simmer. Even Champions outside of the main five are given time and consideration as we get further development Snowbird and Bombshell – two characters whose cultural history played a significant role in their reaction to C.R.A.D.L.E.’s “re-education” attempt last arc. 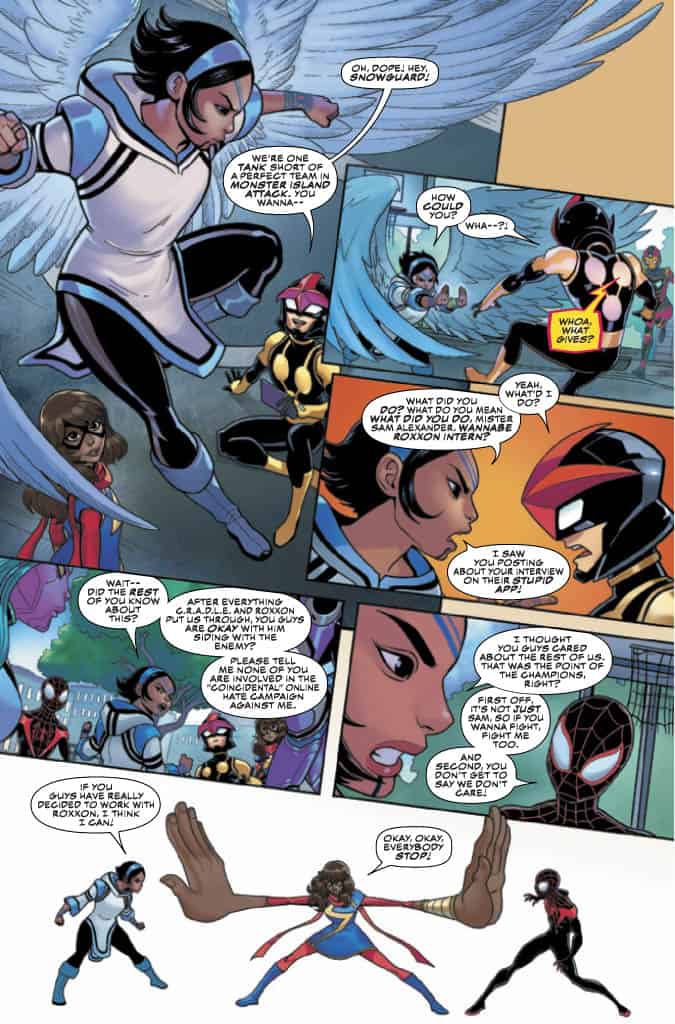 The scenes of activism in the issue continue the drawn from life theme of children being active in making change that we saw in previous issues. Like the Champions, the people shown protesting are children- something painted not as a vulnerability but as an aspect of themselves as they work to be heroes in their own way. 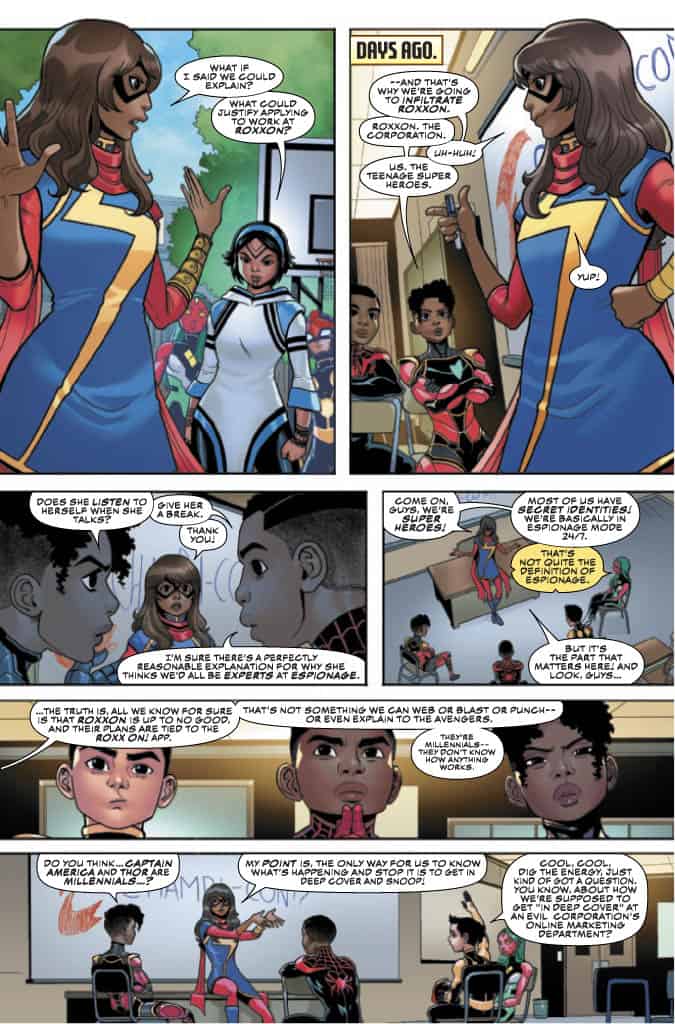 Luciano Vecchio’s art and colors by Federico Blee blend with the youthful vibe that Lore’s writing is presenting. They present dramatic scenes with intent, as the characters speak not just with their words but their body posture. While their action scenes are clean and easy to follow. Also of note is the dynamic and engaging cover by Toni Infante.

Champions #7 leans into the humanity and the youth of the characters, bringing the concept of the team to the surface without losing any of the fun of the action.