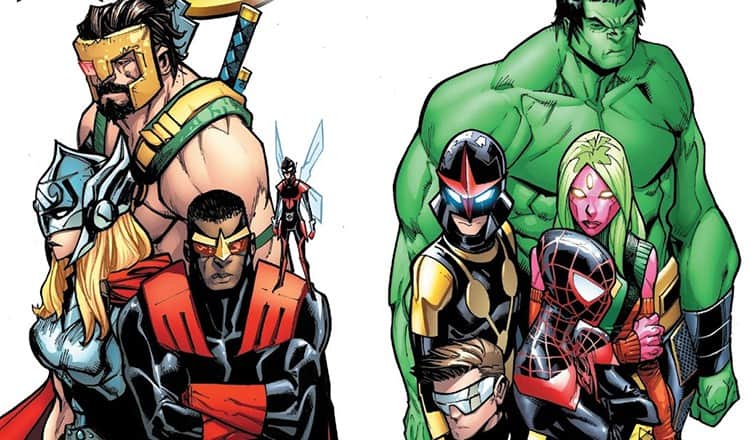 When a meteor lands in Lexington, Kentucky, The Champions are forced to team up with the Avengers.

With constant in-fighting among the veteran heroes of the Marvel Universe. The younger generation of upcoming heroes has broken away from their predecessors to form the Champions. Ms. Marvel, Nova, Spider-Man (Miles Morales), Cyclops, Viv Vision, and Hulk have united in the hopes of creating change in the world for the better. Meanwhile, the Avengers are recovering from the betrayal of Steve Rogers and the events of Secret Empire. A threat in the form of a meteor from counter Earth has brought the two teams together. And if they hope to stop whatever is coming, the “varsity” and “junior varsity” teams must work together. The two teams mobilize and spread out to deal with the danger around the globe; skyscrapers vibrate out of control, putting thousands of innocent lives in danger, leaving Hercules and the Totally Awesome Hulk to deal with the immediate threat.

Splitting into five teams, with Hulk and Hercules dealing with the creature that emerged from the meteor. The young Cyclops, Spider-Man (Miles), and Vision head to Dubai. Ms. Marvel, Thor, and Spider-Man (Peter Parker), race to South Korea. While Nova and the new Wasp are sent to Shanghai. Falcon and Viv get to New York, all teams attempting to stop skyscrapers from vibrating out of control and killing thousands of innocents. While each team stems the danger in each location, there is still an underlining tension building between the teams. The veteran Avengers, have taken the lead very quickly and cause the younger Champions to feel somewhat dismissed.

Even though the Dubai, South Korea, and Shanghai teams are able to deal with their respective missions. Falcon and Viv are unable to stop the skyscraper in New York from vibrating. Thus causing them to be exposed to the frequency caused by the vibrations longer than anyone else. Not even destroying the machinery inside the meteor was effective in stopping the vibrations in time. The exposure causes Viv and Falcon to phase out of sync with Earth and transport them to counter Earth. Where they are surrounded by numerous creatures similar to the behemoth that emerged from the meteor. 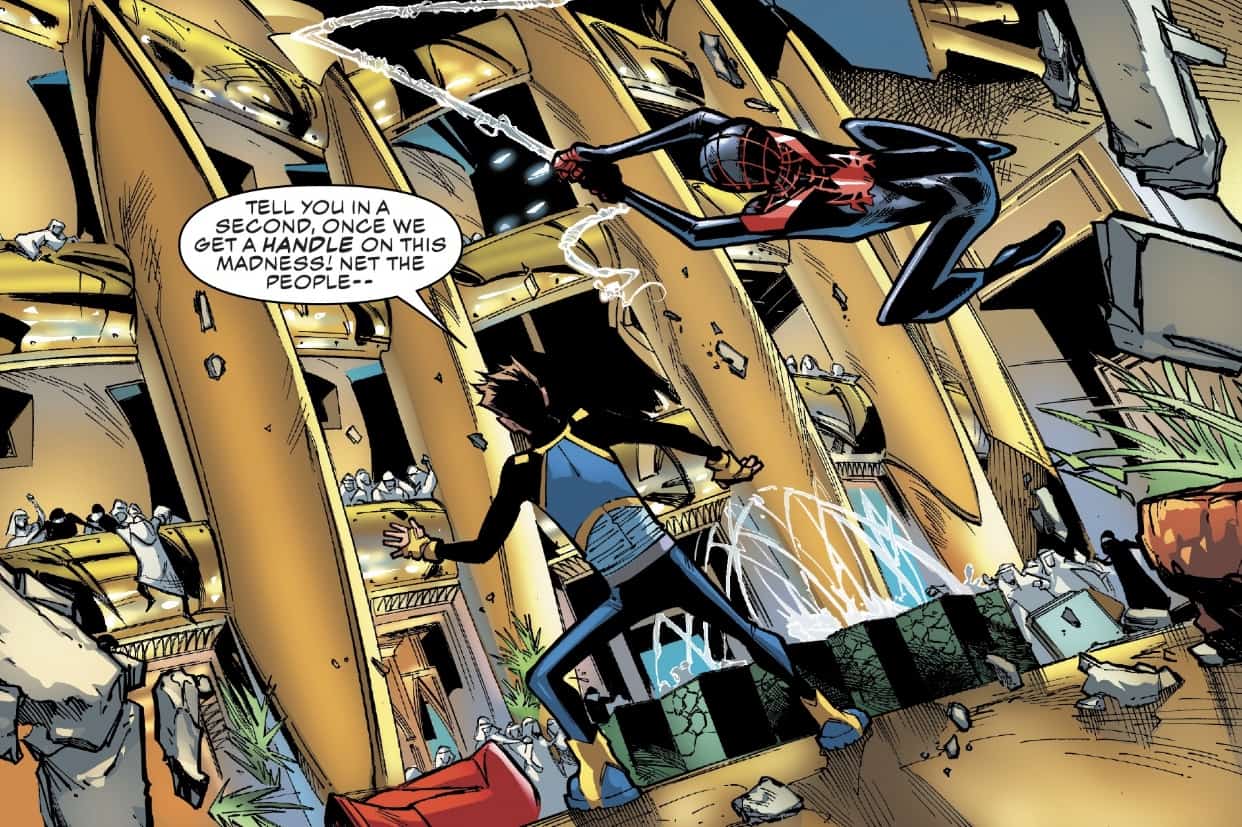 The story is a classic spin that has been done many times before and Mark Waid executes it seamlessly. It’s the “X-Men meets the New Mutants,” or the “Justice League meets the Teen Titans,” and it’s what you expect from a classic storytelling standpoint. Varsity team takes charge and the Junior Varsity are eager to prove themselves just as good as the big leaguers.  Waid balances things very well as the action keeps moving and the characterization stays in step. It helps that Waid writes both the Avengers and Champions titles so he keeps the tone and pacing in each book the same. Nothing is lost as it is clear that Waid loves both teams and characters for different reasons. Bringing them together in just the right way where nothing feels superficial.

There is such grace in each scene as the young Cyclops attempts to console the Vision. Hercules and Hulk friendship from years ago still feels natural as it did long ago. Miles Morales teenage, under his breath response to Vision comments on Viv. Ms. Marvel asking for permission to give an idea because even she isn’t quite sure of herself yet. Waid doesn’t miss a thing and it’s one of those issues that it’s really the little details that matter most. It is fun to watch the heroes in action and do what they do best. But don’t miss subtle character moments that make this book so endearing.

Ramos and Delgado work wonders in an action adventure book that is meant to be fun and bright and scream “superheroes!” Ramos may have a more cartoon-like approach to the book but it works in an area when dealing with young and enthusiastic characters.  There is still great detail and the facial expressions seal the deal on his ability to tell a story. Delgado follows suits and knows his locations well and colors each panel according to the time zone and region and situation presented. When Waid intends certain emotions and reactions, the art by Delgado and Ramos hit the intended marks they are supposed to.

Final Thought: It’s really simple, this book is just fun! Champions is a consistent joy to read and even as part of this crossover with the Avengers. Champions shines as bright if not brighter than the Avengers.  This type of book has been a breath of fresh air not had since the very first Young Avengers, New Mutants, or New Warriors. It is exactly what you want from a teen book. Super heroics, teen angst that doesn’t overshadow the purpose of being superheroes. And great characters to drive the series forward making the reader anxious for the next issue. It also does the Avengers a favor as being part of this crossover could finally make the Avengers feel more like a super hero team book. Rather than something dark that only leads to the next hero vs hero throw down. With Secret Empire behind us and hopefully a break from hero vs hero stuff. This is a great crossover thus far to get into with good storytelling and a good old fashioned team up of the old guard with the new.