Award-winning cartoonist Ed Piskor chronicles the history of the X-Men as never before! 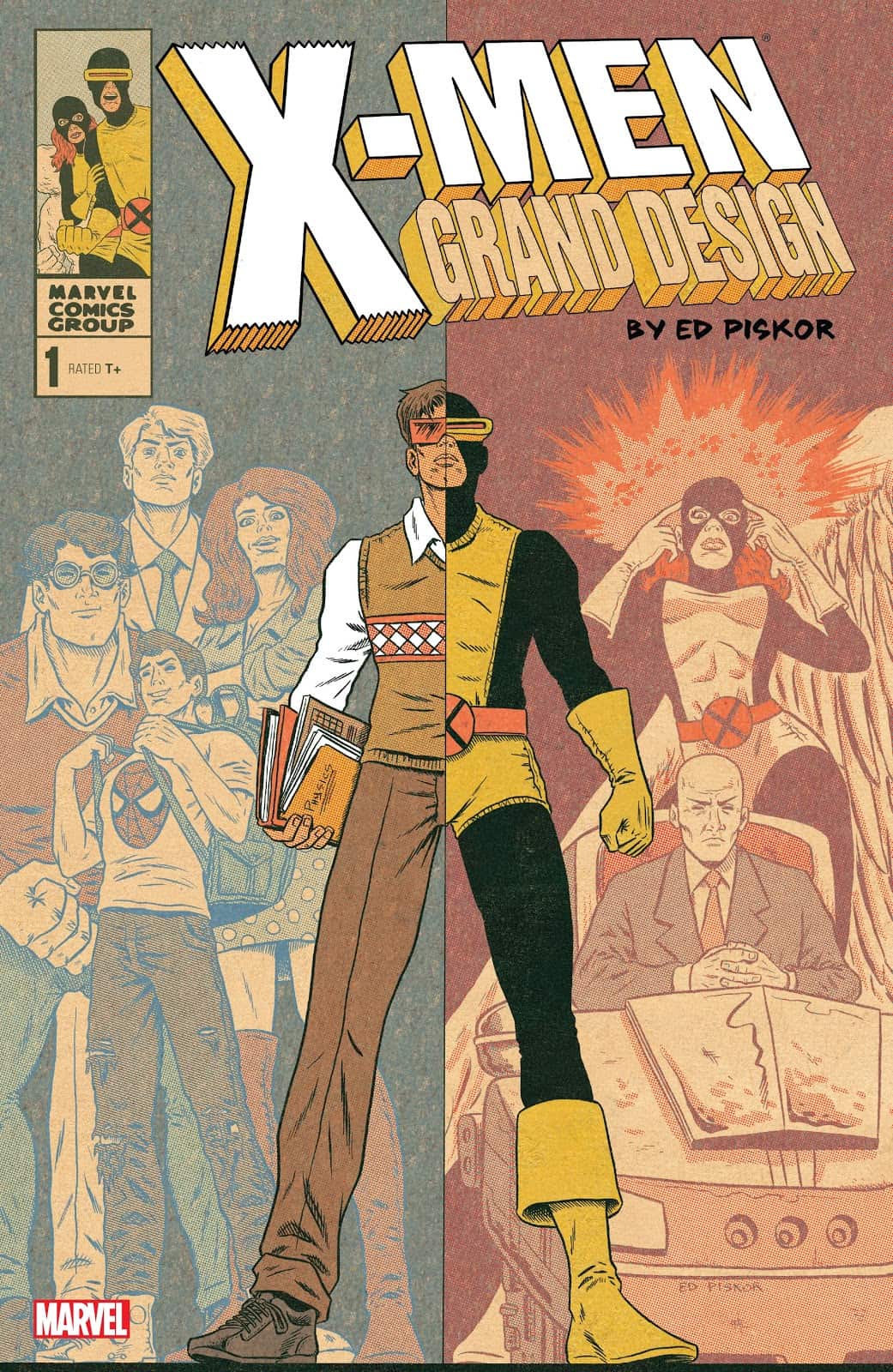 What You Need To Know:
Acclaimed cartoonist and Eisner Award winner Ed Piskor (Hip Hop Family Tree) lends his unique storytelling skills in a comprehensive retelling of the history of the X-Men in this limited series. This issue leads up to the formation of the X-Men, focusing on Charles Xavier, the original five X-Men Cyclops, Iceman, Angel, Beast and Marvel Girl.

What You’ll Find Out:
The Watcher has taken time to gather his thoughts concerning what he has witnessed regarding the history of the X-Men. He begins telling their story to The Recorder. 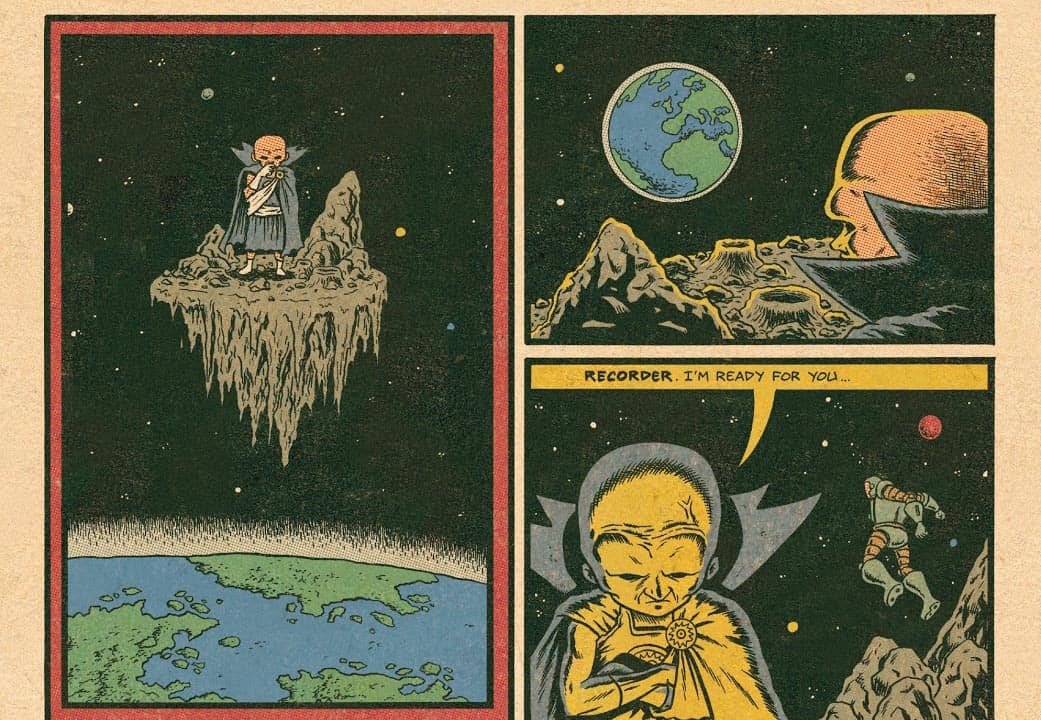 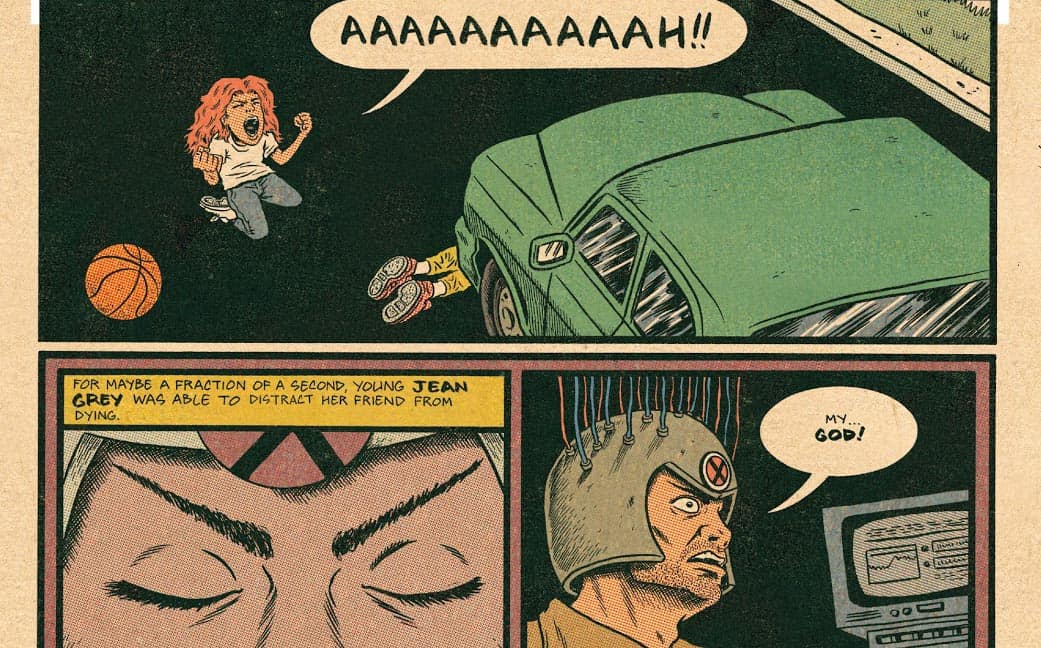 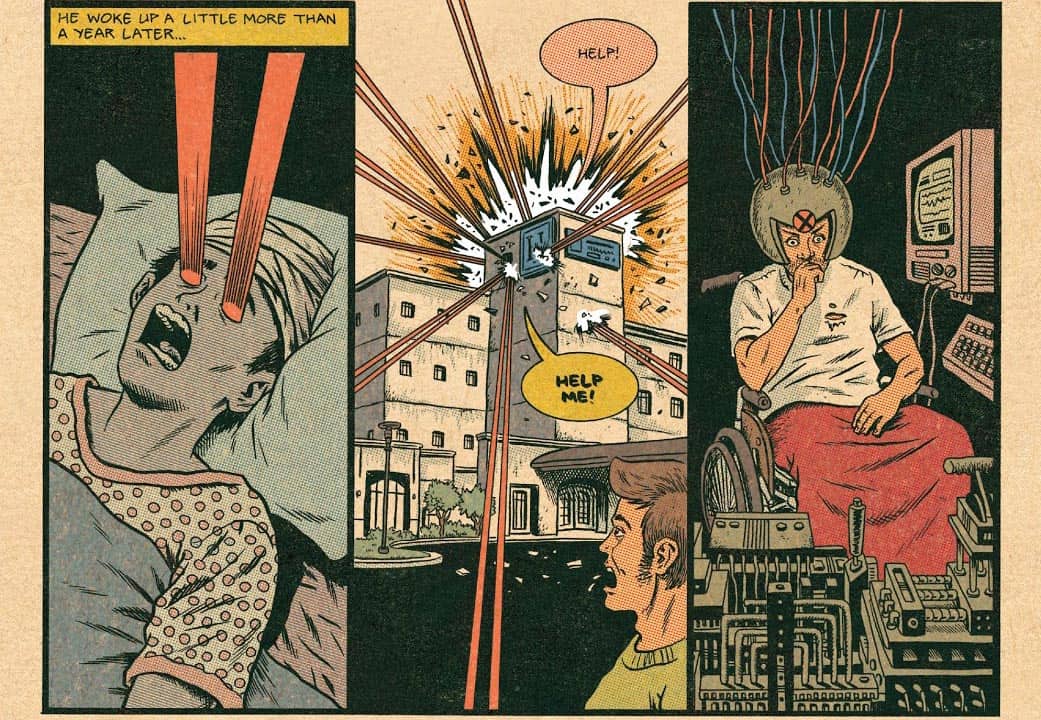 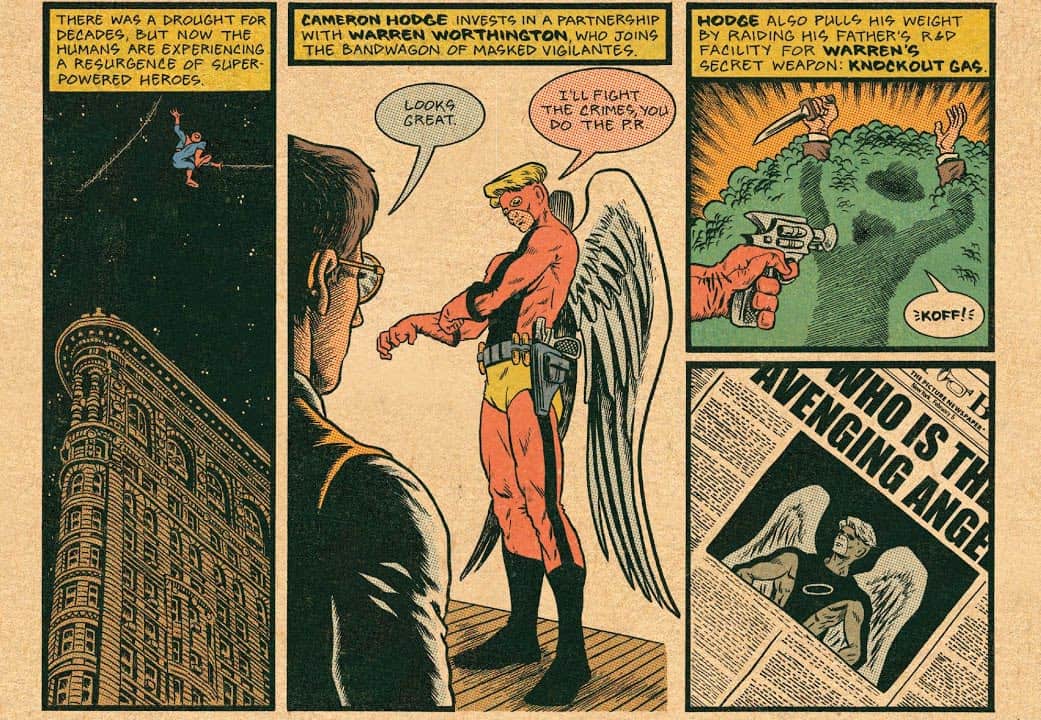 …up until their first meeting with Marvel Girl. 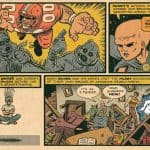 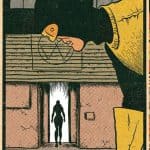 This event has been changed, as a few others have in this retelling, at the writer’s discretion.

What Just Happened?
There are many moments that will delight many fans of the X-Men, but some of those same moments may also divide them. For example, the male members no longer meet Jean, as she enters the school for the first time in her black and blue ensemble, complete with little pill-box hat. No, the boys meet Jean as she saves them from the clutches of El Conquistador as they were attempting to recruit Hank McCoy.

Toad also replaces El Conquistador’s side-kick Chico and is later found and recruited into the Brotherhood by Magneto, Quicksilver, and the Scarlet Witch. I actually prefer this version of events over the original.

When the character of Jean Grey was created, it was during a time when women in comics were shown to be the weaker sex, usually getting captured and bound by the villains, and hoping to be rescued by the men. Years later, writer Chris Claremont would turn that concept inside out by revealing that Jean was potentially the most powerful member of all. Women in comics have come a long way from those times and Ed Piskor’s interpretation of the X-Men’s first meeting with Jean is a welcome change. Piskor has stated:

“I come from hip hop, and in hip hop, the core of everything is sampling. I have an ego into the stratosphere, no doubt. But I also recognize that if Neal Adams draws the Sentinels flying into the sun, that is such a beautiful, mind-bending composition…how can I compete with that? Most of the comic is my doing my interpretation of things. Whenever there’s an iconic moment, it’s an iconic moment. I might pay very close homage to that. Sampling is hip hop, and I’m hip hop to my core. Just because I’m working on a different comic doesn’t mean I stop having that kind of mind.”

Other changes I came across only further enhanced existing stories, making them less confusing and accessible. Some of the changes add a less sanitized perspective of what we know, and I’m ok with that. 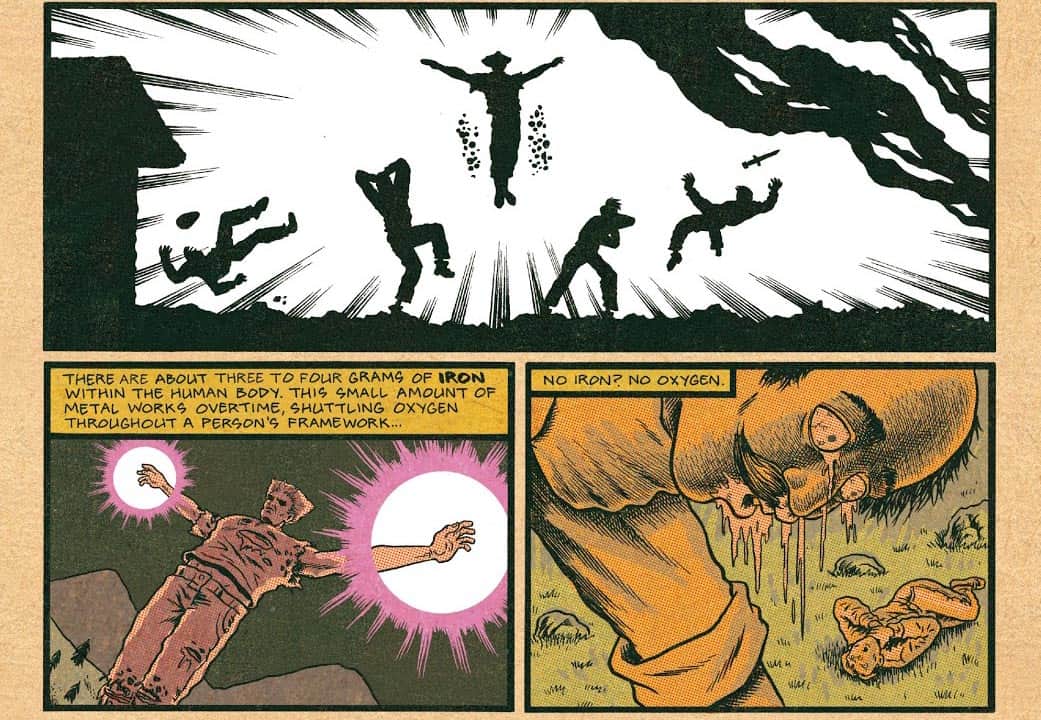 It makes sense, without removing any fantasy aspects from the story. After all, when you have to think too hard about how a comic book superhero does what they do, maybe it’s time to move on from comics.

Some changes, while cosmetic, seem to anger a few fans (so I’ve read and for different reasons), for example, Ororo’s hair when she meets Xavier for the first time is now a mohawk. 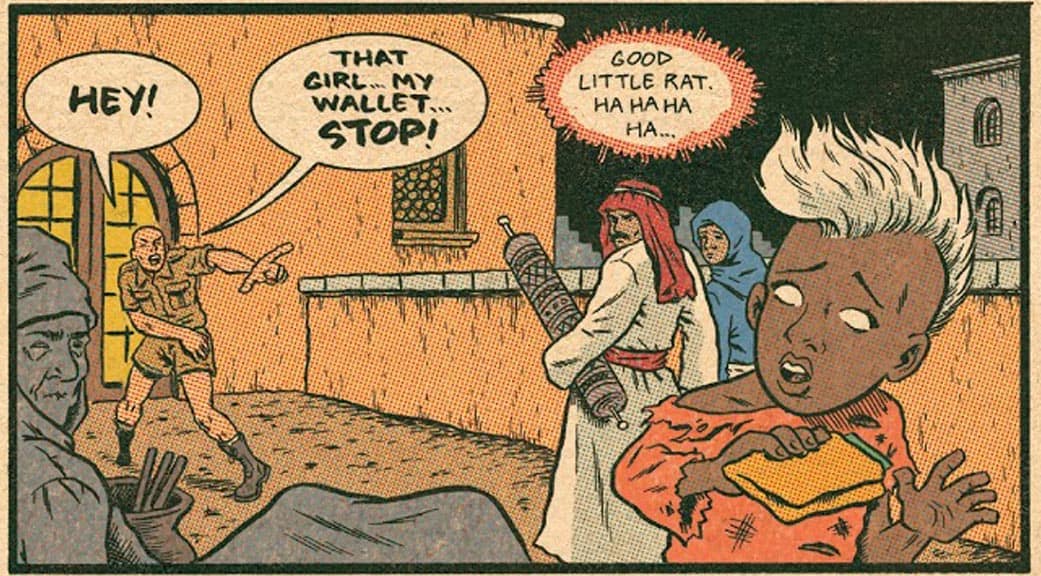 The same moment as interpreted the first time, in Uncanny X-Men #117 by Chris Claremont & John Byrne.

This clearly references Storm’s appearance in the 2016 film X-Men Apocalypse, and now Piskor has remixed the moment. I understand the intention here, but, when Storm originally shaved her head, leaving just the Mohawk, it was a symbolic and outward change conveying a much deeper transformation of the character, that has now been distilled. In the next installments, I hope Ed Piskor takes moments like that into consideration when making changes.

Piskor’s art style is the very epitome of indie, underground, anti-establishment, comic art, that at its core, is very much in keeping with the X-Men’s theme as outsiders. Long before they became cartoon and film stars, they were always the outcasts of society, even within the Marvel Universe, with many other heroes distrusting them due to bigotry. The work here embraces that quirkiness and sends it flying into the creative stratosphere! 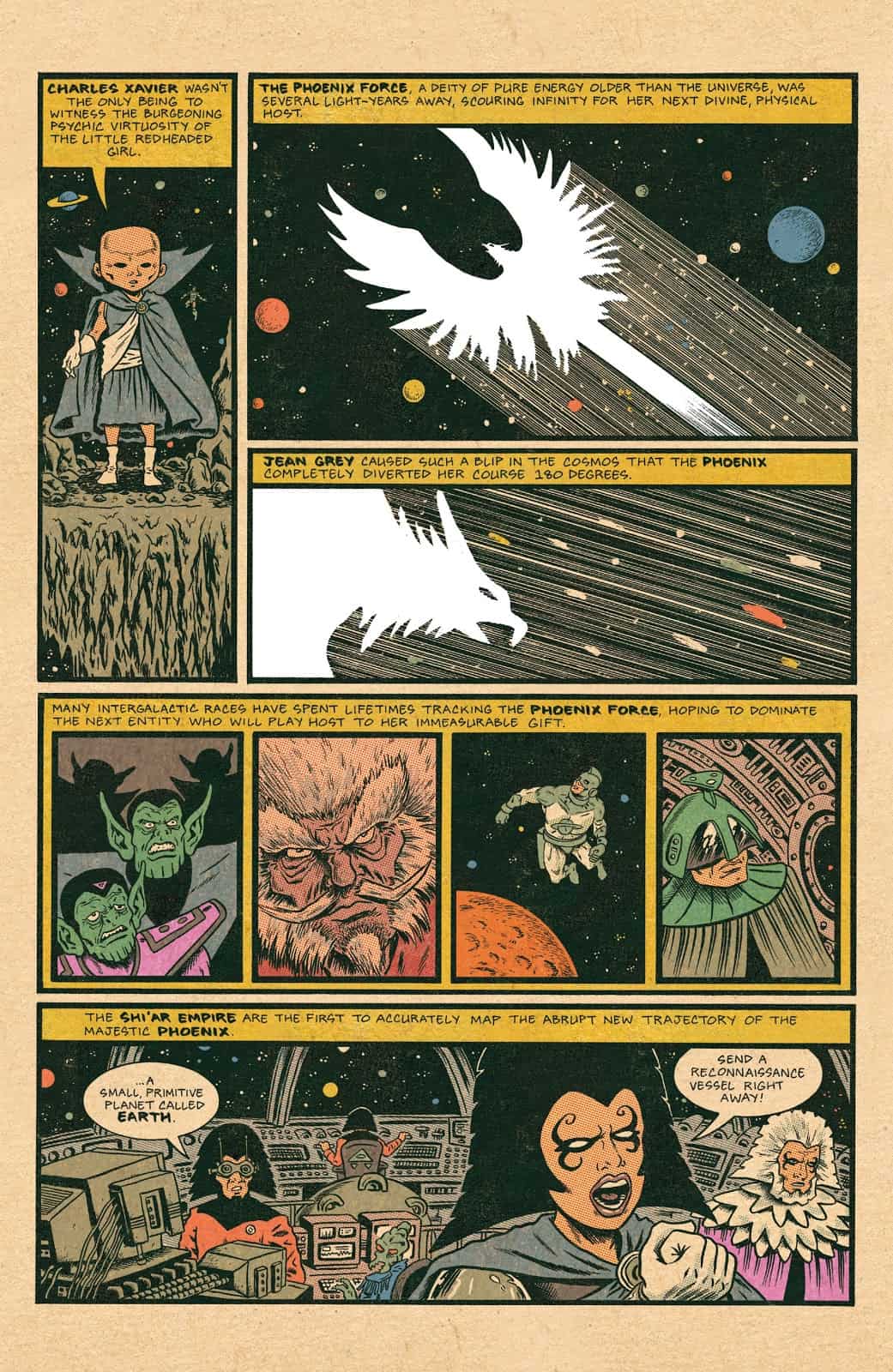 The decision to print this work on heavier, textured paper stock is brilliant.
A tribute to the creators who helped form the X-Men appears at the end, and it shows the level of respect that Piskor has for them. There are also a few pages pointing at key moments in the series, and which comics they took place in. 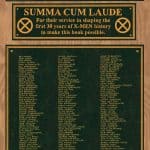 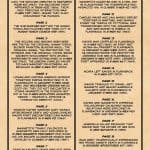 Rating 9/10
Final thought:
It is a Herculean effort to condense almost 55 years of material into a limited series but Ed Piskor greatly succeeds in doing so. He also manages to inject an easy to follow and fresh take on the X-Men’s often convoluted, overly complicated at times, history. This is a well thought out, product. It’s the perfect introduction to the superhero soap opera we continue to be obsessed with called the X-Men.