Classic Comics Review: WildCATS #10-13: What Webs We Weave While Our Souls Combine 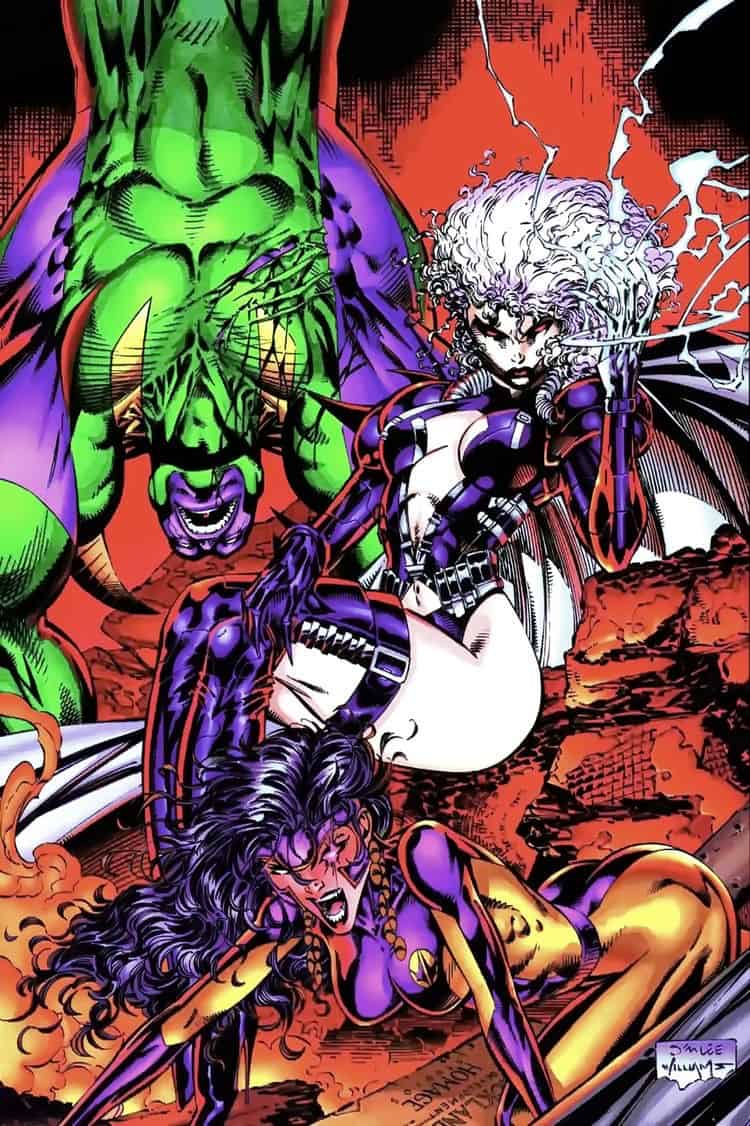 Here I take a closer look at Jim Lee’s WildCATs run on the eve (well a few months before the eve), of the characters' 30th anniversary, along with the rest of Image Comics. Jim and his usual partner-in-crime Scott Williams were joined by comics veteran Chris Claremont, to craft a tale about the Kherubim warrior, Zealot, introducing villainess Tapestry, as well as Claremont’s creator-owned Huntsman.

Image Comics is about to turn the big three-zero this year (a regular dirty 30 y’all) and it marks the first arc of WildCATs to not be written by Brandon Choi or Jim Lee. It also marks the first comic not written for Marvel Comics by the Godfather of one of comics’ most popular franchises, the X-Men, and introduces soon to be WildStorm mainstays Savant and Mister Majestic, as well as introduces my absolute favorite villain from the WildStorm universe: Tapestry. This storyline also marks the end of Lee and Choi’s involvement with the title as they continued to build their fledgling comic universe into the brightest stars of the Image Comics line. So let’s get into it, shall we?

WildCATs #10-13 is a vast improvement over the first nine issues, and you can really see the shortcomings from Lee and Choi by comparison. Lee and Choi would do their best to echo Claremont’s style of dialogue and exposition, but their efforts would pale in comparison to the master. Claremont, newly freed from the world of the X-Men and writing like a man on fire, chooses to focus on Zealot and mines newfound depth and gravitas, particularly in relief against the more Wonder Woman-like character we had been introduced to initially. This might be the story’s strongest asset. Instead of giving superficial derivatives of characters from the Big Two, we get just a little bit more insight into the world of the Kherubim and Daemonites. Unfortunately even a veteran comics writer like Claremont can only do so much with what has been given.

This was Jim Lee’s final arc as artist for WildCATs, and he definitely didn’t pull any punches when it comes to his craft. Sure, it’s chock full of 90isms, but that’s what Image was about in the beginning. Hot babes with big boobs, buff guys who had all the coolest, most futuristic types of tech. The art here was dark, moody, dynamic as hell, and foreboding. The characters are striking looking, fashionable to the era this comic was produced, while the villains looked like villains should look.

Style trumped substance in this era of excess, but with Claremont coming onboard, it was WildStorm’s beginning efforts into making this universe a lush and full world that could rival other small press comics like Jim Shooter’s epic Valiant universe. I often hear that the Wildcats are analogous to the X-Men, and I’m hard pressed to see the correlation. Maybe aesthetically, but even that could be argued. Lee designed the X-Men’s 90’s look, and created the characters here, but that’s about as far as I would go. Lee, Choi, and company would also push the harder edged sci-fi, as well as the conspiracy theories that would help distinguish itself from the more mainstream comics of that time. Unfortunately the core WildCATS concept isn’t as fleshed out as it could have been at this point in the run, but thankfully it paved the way for top tier writers James Robinson and Alan Moore to further expand and flourish Lee and Choi’s initial labor of love.

The storyline’s a tad clunky, but that has more to do with the lack of depth imbued upon these characters from the neophyte creators, Jim Lee and Ryan Choi. While this title would be the book they’d cut their teeth on, they’d hand the keys over to industry vets to craft a deeper, and stranger universe that would continue to have support three decades later from a very loyal fan base. The story isn’t without its warts, but it’s a direction that the title sorely needed to move the book in a direction that would differentiate it from other team books on the stands.

Classic Comics Review: WildCATS #10-13: What Webs We Weave While Our Souls Combine