Clear #1: Grime on the Looking Glass 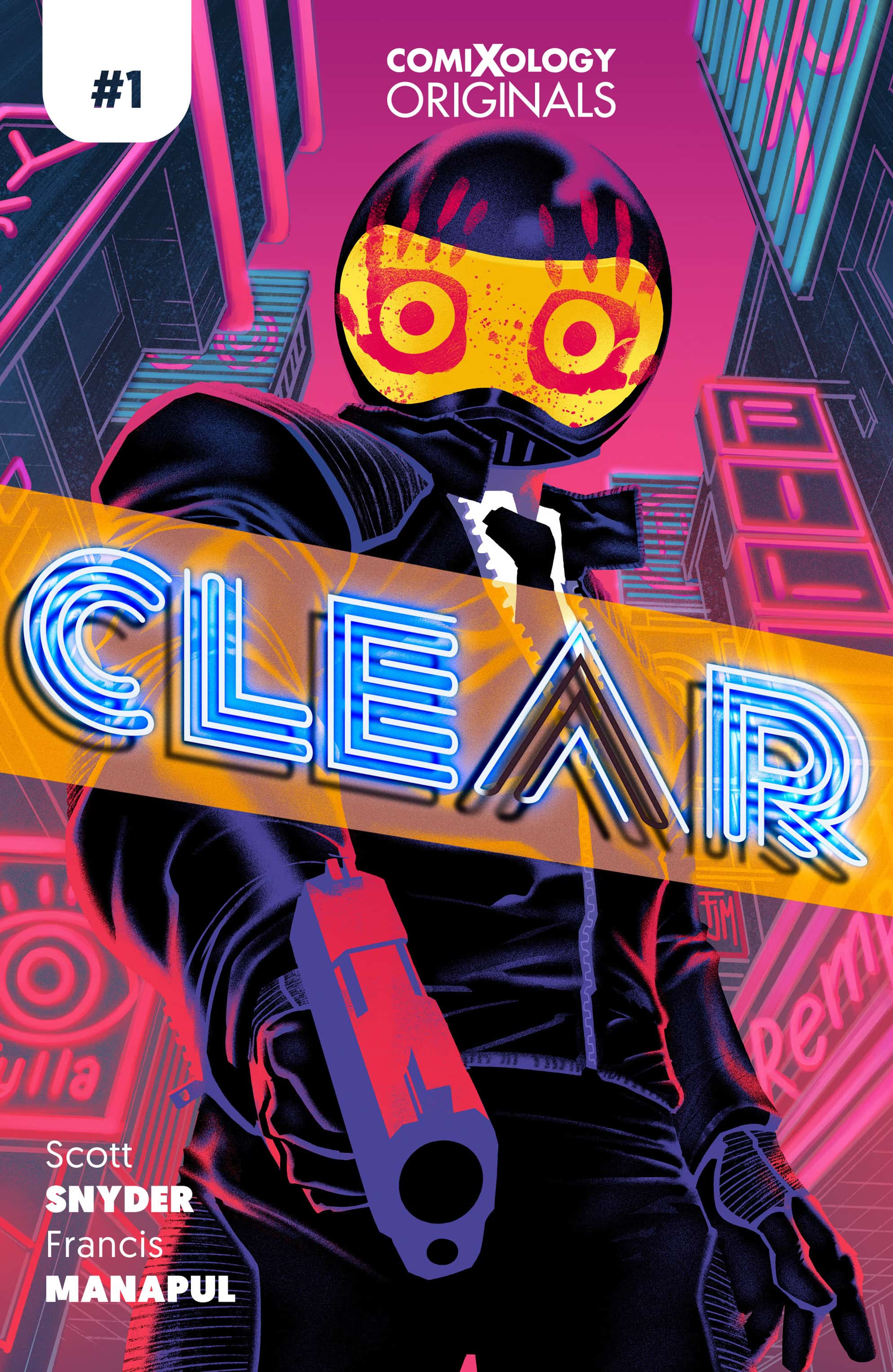 A sci-fi mystery thrill-ride into a strange dystopian future, where a neurological internet connection is transforming reality.

There’s no argument that Blade Runner is the quintessential sci-fi noir. The film is a perfect distillation of two separate genres that were combined in a way that awakened something in creatives. It feels like in the years following, there’ve been hundreds of homages, parodies, and knockoffs to the film that range in quality. It’s a testament to the film’s staying power, but also is a double-edged sword in terms of the media trying to engage and honor the movie, without watering it down or cloning its unique elements.

Clear, in its broadest sense, seems to be Scott Snyder and Francis Manapul’s riff on the tried and true atmosphere of Blade Runner. It’s all neon colors, a hodgepodge of cultures, and an interesting technology skinned over a noir plot. Usually, an homage to Blade Runner pairs one or two of those elements, but here all three are in full force. The premise of the world is that VR has become localized to every person, and they’re able to put a filter over the world and see what they want to. One person may choose to see their surroundings in a classic Disney animation style, while another makes everything appear as the Old West.

Our protagonist, Sam Dunes, is a private investigator whose primary work is investigating what it is people choose to see. The technology to obscure the world are Veils, and as anyone who’s seen a sci-fi or noir film, when there’s a MacGuffin, there’s usually a dark inverse of that MacGuffin. Here, that inverse is a Black Veil, an unregistered filter that lets a person see what they want, without anyone knowing. In Dunes’ profession, it’s the futuristic version of a seedy motel room where shady deals and adultery occur. It’s all familiar elements retooled with its own personal Veil.

Snyder’s script is tight and compelling, guiding the reader through this new world. It’s reminiscent of the TV version of Westworld, where it’s the future, but still feels tangible and within our grasp. The use of Veils in the book is a great way to see the tone of this world apart, and in comparing it to a Westworld or Blade Runner, feels breezier and a little more snappy. This isn’t to be taken as derogatory, but this is Blade Runner made with the veneer of a summer blockbuster. Snyder’s script doesn’t reinvent the wheel, but it still feels fresh and original in a world of uninspired Blade Runner knock-offs.

The book succeeds and innovates in the ways that Manapul can render not only the world Dune, who refuses to look at through a Veil, sees but in what the rest of the characters experience. Manapul’s distinct panel composition flutters through these pages, giving the audience snapshots into the specific realities of those who choose to Veil the world. There’s a three-page action scene where Dune chases a car full of thugs and begins to see his world shift. The thugs managed to hit Dune with a cocktail of Veils that violently shift the world around a person, called a Zad.

Manapul lays out simple rectangular panels on the page, but inside create smaller panels are affected by the Zad, overlaying Dune’s action in the chase with projections of fantasy worlds. It’s the most breathtaking sequence in the issue and highlights just how much Manapul has a mastery over his sequential storytelling skills. Aided by his phenomenal, signature watercolors, the sequence, and the larger book feel like something that cannot currently exist in our world but is just out of reach.

Clear is a promising start to what could be a compelling sci-fi neo-noir. It replaces the long lingering pace of most science fiction and replaces it with a kinetic, surreal visual style. The mystery and characterizations are the textbook noir archetypes, but knowing Synder’s body of work, it’s not hard to guess that there are some tricks up his sleeve. Bolstered with Manapul's next level panel work and colors, this could could, and should step out of the neon drenched shadow of Blade Runner.

Clear #1: Grime on the Looking Glass