CLEMENTINE Puts the YA in Zom-bay Apocalypse 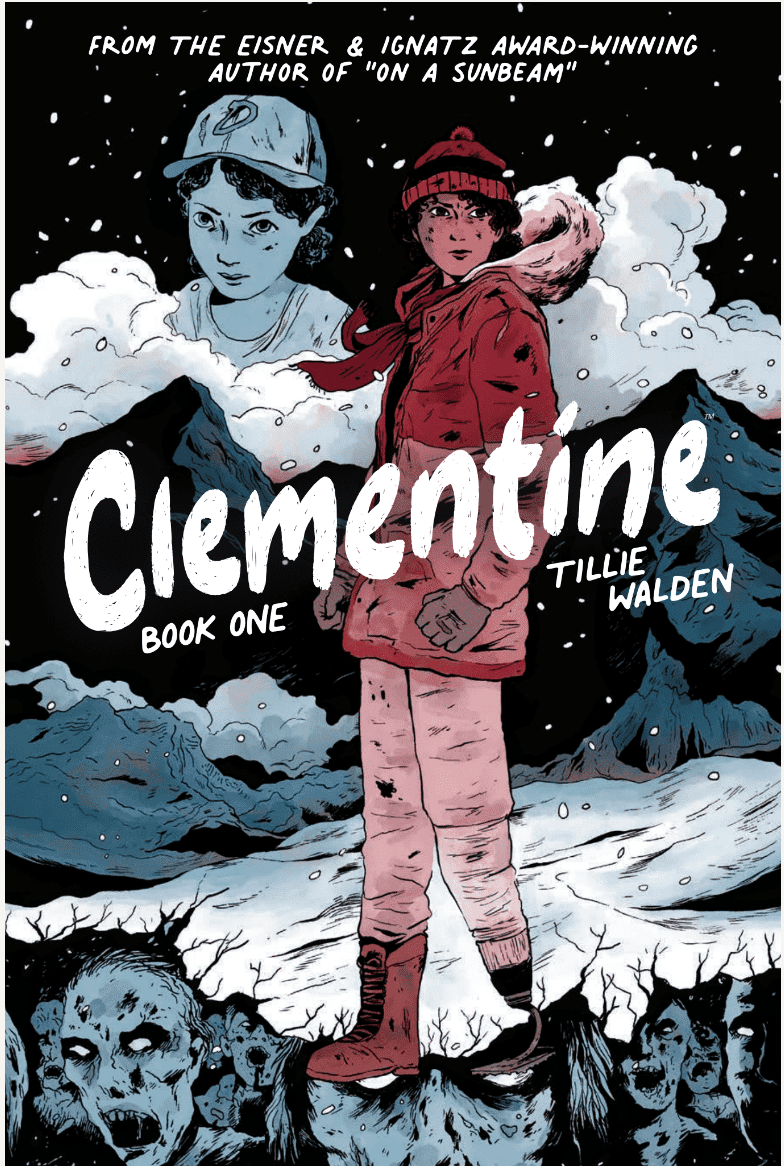 It's the zombie apocalypse - and Clementine, alone, one-footed, and on the road, meets a young man named Amos hailing from an Amish community. His community takes her in - but Amos wants more. He wants adventure - and he wants it from the mysterious airplane he saw overhead, which dropped leaflets hailing a mountaintop settlement in New England.

Intrigued, and wary for Amos's sheltered existence from the world beyond, Clementine heads northward with him to try to find a walker-free new start.

But as ever in the world of The Walking Dead, nothing is what it seems!

A very heartfelt thanks to Lillian Hochwender for her invaluable assistance with this review.

It’s a little bit of an old saw by now: The Walking Dead has run out of gas. The comic abruptly ended, and viewers have fled the show in droves over the last few seasons. But where the source material has concluded and the show has (debatably) run out of steam, its spin-offs, Fear the Walking Dead and World Beyond proved there was still plenty of life in the venerated post-apocalypse zombie tale – all it needed was a creative goosing in new directions to prove its mettle still mattered.

And now, in the world of comics, that’s proving too with Eisner winner Tillie Walden’s wonderful YA graphic novel Clementine.

Clementine retains much of the same sensibilities of its source material, but with the PG-13 gloss of YA fiction. There’s danger lurking, but no hideous mutilations; adult themes, but no hardcore sex and nudity. The walkers are omnipresent, but Walden wisely holds them back for the majority of the story for maximum impact when they do show up. It’s a great way to get younger readers perhaps not yet prepared for the grim shock of the show or the main comic to fall into tits world.

Walden also makes a wise move in shifting the scenery northward, where neither the comic nor the show ever ventured. There’s a scene early on in the comics that eagle-eyed readers might remember, when Rick Grimes and company discover that walkers have a hard time moving in the cold and snow – to the point that they’re barely a threat, because they move with such sluggishness. That Checkhov’s Gun was never brought up again, unfortunately (though the show did have a snowstorm episode at one point), but the thought should have always been there: shoot, why not live in a place where the walkers would be the absolute least threat? Sure, it would be cold and would need to be acclimated to, but at least the chance of getting your face gnawed off would be minimal.

Clementine herself feels incredibly authentic, and is a great example of inclusivity: she has a prosthetic, but Walden never dwells on it or lets her be defined or limited by it. It’s just there, a part of who she is, but  neither an elephant in the room or being ignored. It’s so nice to see disability representation in a comic that’s complex and doesn’t devolve into stereotypes. Additionally, she’s gutsy and smart but never feels inauthentic or like some misplaced action hero. She’s vulnerable, too: she’s just a kid in the grand scheme of things – maybe fourteen or fifteen, with all of the fears and insecurities that go along with that. She’s brave, but not unrealistically so. And she’s wise enough beyond her years to know when something doesn’t smell right – her fears for Amos as he strives to head out into the big bad world, the boy from the Amish community she befriends, prove to be true. Yet, she’s never jaded about the risks Amos and she will surely face.

And, as with just about any YA novel/graphic novel, there’s just a hint of teenage romance afoot when Clementine meets Ricca, another member of the group seeking to establish a refuge atop the mountain, where the walkers are of minimal threat. Ricca is every bit Clementine’s equal in terms of cunning and intuition, and they make a great pair. There’s a youthful vulnerability and awkwardness between them that’s a lot of fun to watch subtly unfold.

But then there’s those zombies, which ironically are probably the weakest part of the book. Despite their omnipresence, the simplicity and YA-geared art of Walden’s makes it hard to feel like they’re much of a threat. Even scenes that are supposed to be intense – there’s a scene in a ravine that particularly comes to mind – that fall flat because the youthfulness of the art makes a true sense of danger feel natural. Fortunately, the zombies themselves are more background than in-the-moment threat, but this issue does sideswipe a major component of the story.

Fortunately, as with any Walking Dead yarn, it’s really the human element that’s the true danger, and Clementine has that in spades with a pair of twins who refuse to give their names and go by, ominously, Right and Left. They’re the ones in charge of trying to start the mountain colony, and they have secrets – ones that, naturally, threaten to undermine everyone’s safety and the entire burgeoning society in and of itself.

With five core characters to play with, Walden keeps Clementine‘s narrative moving forward in a spritely fashion as each of the disparate personalities play off of each other wonderfully, and alliances shift with quiet ease, slowly tilting the axis of the narrative into surprising territory as it sprints toward the finish line. Walden pulls a fantastic bait-and-switch that kicks the third act off with a bang, showing off her deft narrative skills. Clementine‘s biggest drawback is it’s propulsive narrative – it ended far sooner than I’d have liked! Fortunately, there’s a second volume in the works for next year.

Clementine pulls off a rare feat in telling a YA-centered tale set in a decided R-rated world and pulling it off with conviction. The characters are full of life, the danger is real, and what's familiar is made new again. Don't let its YA format fool you - Clementine is a comic anyone could read and love.

CLEMENTINE Puts the YA in Zom-bay Apocalypse