Alex Summers, finally reverted from his evil Axis dark side, is looking for redemption by being a hero and starting a new team of X-Men.  He’s ready to be a hero, but is the world ready for his attempts at heroism?  An all-new storyline starts now!

What You Need to Know:
After the events of Axis Havok was left evil and not reverted to good as were the majority of heroes until the events of recent issues of X-Men Blue where Polaris and Emma Frost worked together to release him from his evil persona and also heal his facial scars obtained in another past storyline.  So we now have a fully restored Havok looking to clear his name and lead a team as he has done previously.

We start off with Havok here trying to save the day by taking down a giant evil monster.  However, it turns out that the Avengers had planned to peacefully relocate this monster and Havok unintentionally creates havoc by damaging a skyscraper and hurting the monster who was only trying to find a better habitat.  Tony Stark and Captain America whine at Havok saying he is doing more harm than good despite the pair having done nothing to revert him after the events of Axis during which he was actually an Avenger. Havok, rebuked from being an Avenger again, returns to the X-Men who currently live in the X-Mansion in the middle of central park.  He returns as a teacher of…. Sass?  He really has no educational qualification either as shown in the two pages it takes for him to lose his temper with a bunch of the teen X-Men after which he is confronted by the headmistress Kitty for messing up yet again.

Kitty Pryde, the current X-Men Headmistress puts the smack-down on Havok saying that he cannot take any students to form a team and that she legally owns the rights to the X-Men team name as devised by the deceased Xavier.  Which is in and of itself problematic as in last issue Xavier has resurrected himself so the will would be null and void, however, it does let us know that the X-Men, in general, are still unaware of Xavier’s return to the living.

Doubly rebuked, Havok is teamless and homeless being rejected by both the Avengers and X-Men he takes up in a sleazy motel which he, of course, destroys after a nightmare containing Bastion, the evil sentinel leader.  So he decides he needs to put together a team pronto to fight his inner demons and redeem himself in the eyes of actual heroes everywhere.  First stop: Hank McCoy the Beast!

The Beast initially shoots Havok down as he is currently a Harvard genetics professor.  Beast actually having teaching qualifications has taken to academia and has no interest in heroics at the moment.

Havok tries his best, which isn’t very convincing as shown above, and Beast continues to reject Havok’s offer to join up with a new team.   Conveniently the Reavers attack the classroom.  Beast assumes they’re after Havok, yet they are actually after Beast.  It seems that the Reavers are currently rounding up lead geneticists as earlier in an interlude this issue the Reavers collected Miss Sinister for the mysterious military clad Callahan.  Beast and Havok having trouble defeating the Reavers by their lonesome need some dues-ex-machina backup.  Enter death seed apocalypse Banshee summoned by Beast to save the day in a last panel cameo!

The team-up so far:
Havok: I want to be a leader!
Beast: Hahvahd Yahd

Almost sort-of on the team:
Warpath: I was in a few panels but was the strong and silent brooder.
Banshee: SCREEEECH!!!!! 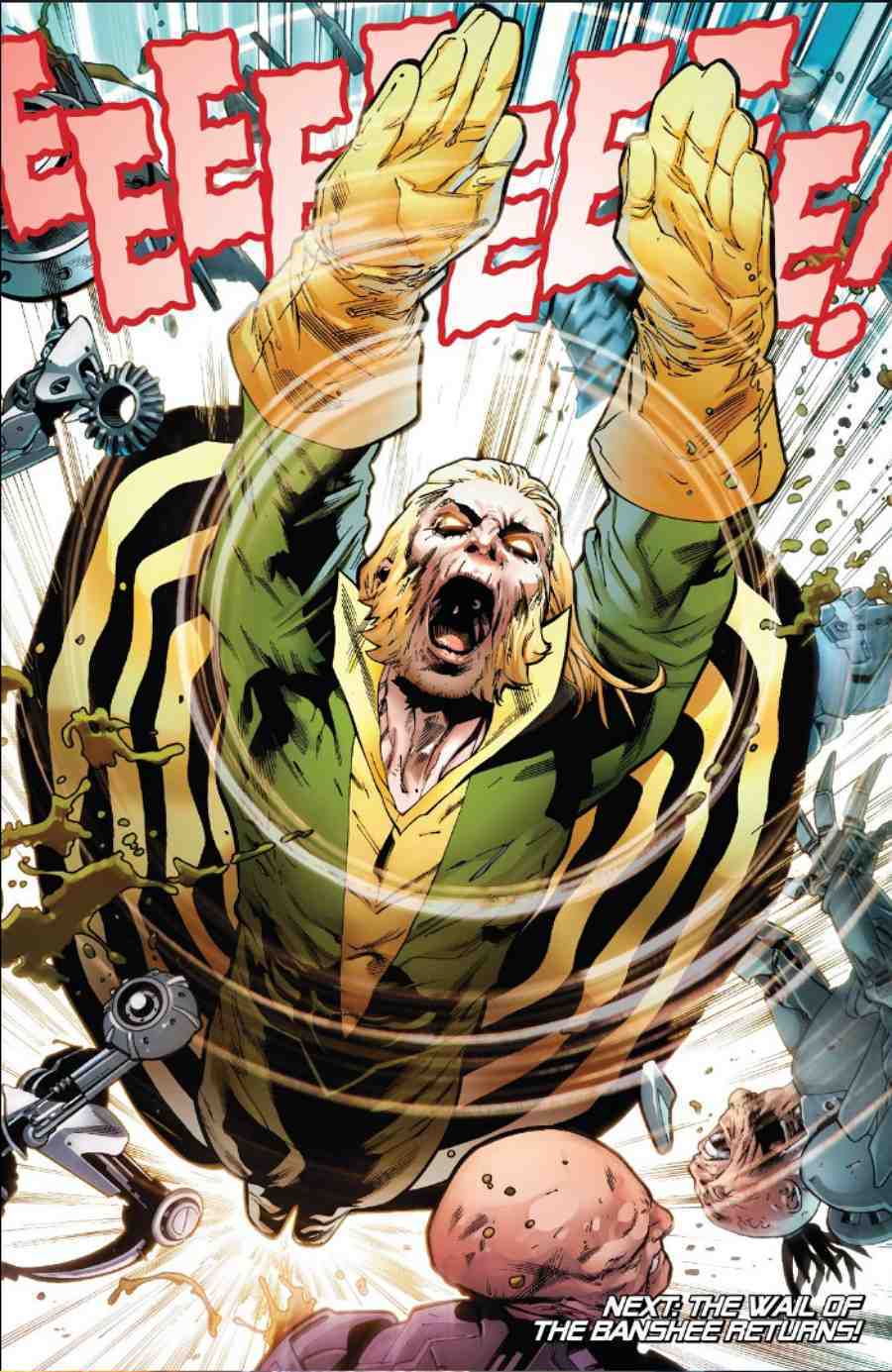 Additional bonus page of “Countdown to Extermination” – Dazzler and Warpath seem to be obliterated by a blast 20 years in the future yet wearing their costumes as displayed on this issue’s cover.  One being able to infer that the team may soon be sent to the future to deal with a deadly threat.

Ranking:  6/10
Final Thought:  Havok, unqualified for most things, tries to make himself relevant by being the hero for which nobody asked.  The majority of the issue is spent in X-Position and over half of the characters promised on the cover either is not in the issue or barely in the issue.  Hopefully, more is explained next issue regarding the menace that is the military controlled Reavers and that the rest of the team as promised actually joins up.

Cool variants to also collect of teammates who have yet to team-up: 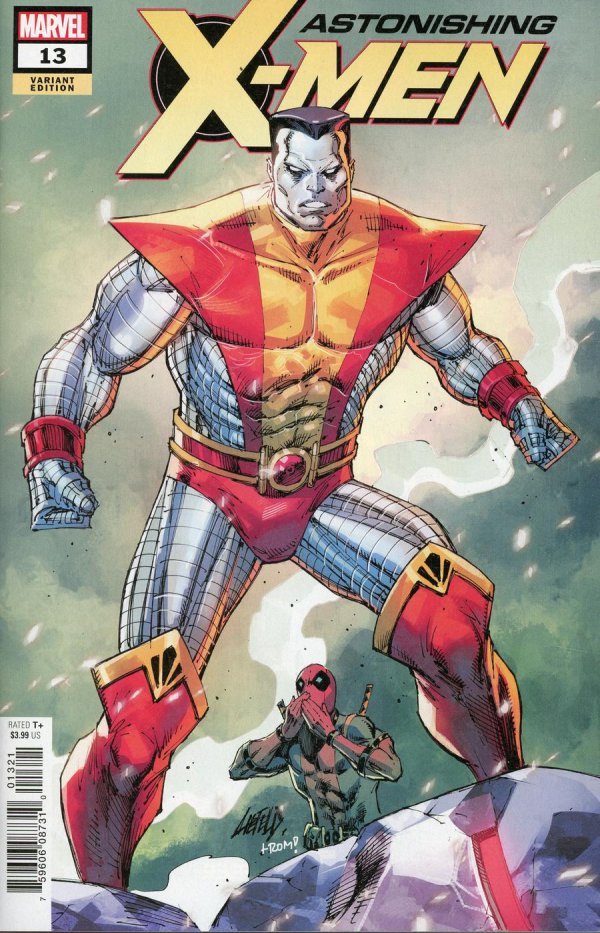 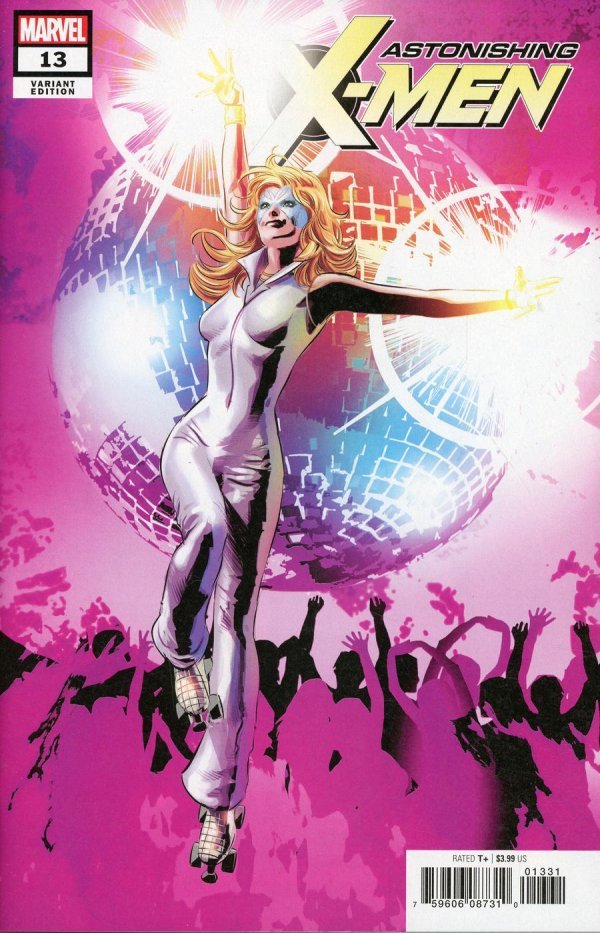