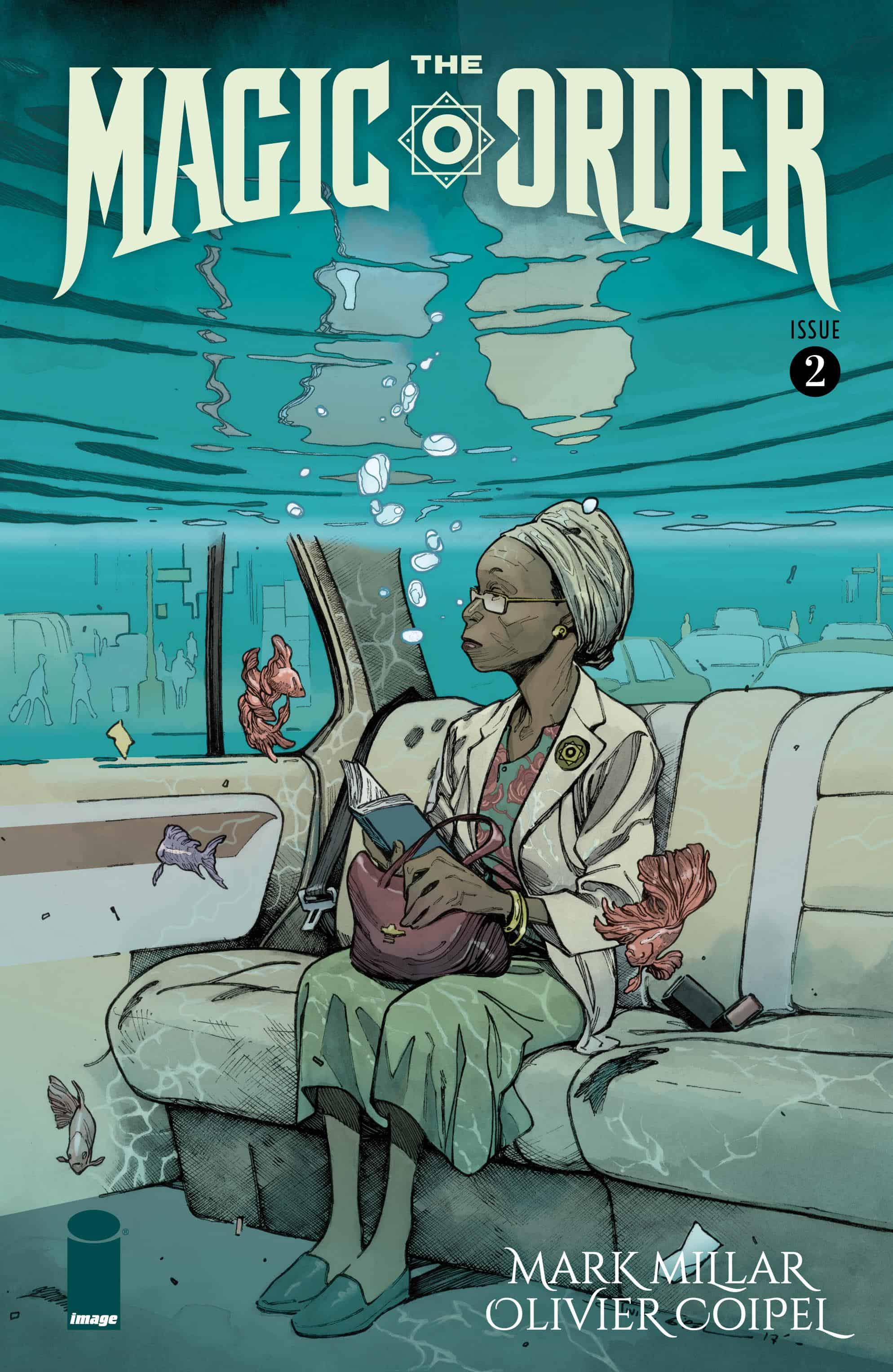 Magicians are dying and not from natural causes. Members of the magical families that make up The Magic Order who’s sworn duty it is to protect the normal world from magical terrors are being murdered by unknown forces. The members gather together to
discuss a course of action…

Cordelia Moonstone has never been normal… she reflects on this during an escape act as she regales an unseen audience with a tale of her upbringing. What normal fetus when faced with possible abortion would instinctually activate their magical ability and transport themselves from one womb to another? Man, that must have been one surprised surgeon! Growing up we learn young Cordelia had showmanship in her blood from a young age, often performing literal death-defying (but highly successful) acts of escapist magic for an audience of peers and dismayed school teachers!

This leads to her moving schools often and coming into conflict with her father Leonard Moonstone who constantly reminds her that their bloodline’s job is to protect humanity with their magical gifts in secret. Cordelia’s spoken introspection includes her reflecting on her own less than a stellar adult life filled with drinking and other bad decisions and we learn her mother left her father for a life outside of magic and that Cordelia harbors a deep-seated animus toward her father but yet she chose to do the same type of job as him. This is all deeply informative and would be fine if she wasn’t telling this tale to a bunch of stunned children at a children’s birthday party! The cops arrive but before they can grab Cordelia she does her magical schtick and all that’s left are two puzzled cops, an empty straitjacket, and chains as she vanishes.

At his club in Boston, Regan Moonstone is summoned through magical means to attend a meeting at Moonstone Castle, A magical place hidden from the prying eyes inside a painting that hangs in the Chicago art institute because of a security breach years ago. Regan steps into the painting of the Castle and crosses the drawbridge to be greeted by another member of the Moonstone family, the elderly Edgar, who guides Regan down to the library where the others are gathered, and who it is revealed is a permanent resident in the painting. the topic of discussion is the disappearing fellow magicians and how they can counter it. Madame Albany (She of the sun blotting and funeral crashing from issue one) is believed to be the ultimate culprit but we learn that there are rules governing how they can counter her machinations and that an outright attack on her and her followers without proof would be against the ‘rules’ of such things. We also learn through Cordelia and via explanation of the libraries mistress Edith The Librarian that the ultimate goal or prize is a book, a book so powerful it cannot be destroyed, contains spells that could slay a deity and was, in fact, the reason for the two world wars… it is called the Orichalcum and it contains dark magic dating back to the time of Atlantis.

The wizard’s continue to debate. There is some back and forth including a rather thorny observation by  Cordelia aimed at her father but before they reach a resolution one of the magicians interrupts to reports a break-in at the orders magical storehouse called the vault.

Jump to suburban Ohio where Cordelia and Regan have arrived at the vault to meet a fellow order member Ray who discovered that someone had broken into the secret magical artifact storehouse. Its revealed that the thing that’s gone is something called The Horologium: described as a time eating creature. While the wizards debate why someone would steal such a creature Cordelia observes that something else is missing as well…

Back in Los Angeles Order member Eddie ( who is a UPS driver by day) is just about to climb into his vehicle when he is set upon by Madame Albany and her minions as they use the other missing magical item called a soul camera which captures the subjects it photographs in an instant photo to trap Eddie. We learn from Madame Albany that the ultimate goal of her and her cohorts is to replace the current Magic Order with herself and her allies because she doesn’t like the way the Order does things and we also learn that the mysterious masked, tricorn wearing figure is a magical assassin called the Venetian as another magician dies a gruesome death…

Cut to New York Traffic where Edith the librarian ( she’s in charge of the magical library at Moonstone castle) is sitting in a cab when she attacked by the Venetian who magically seals the cab and fills it with water drowning its occupants before they can be free themselves or be freed by the bewildered onlookers who get the vehicle open too late. Business like the Venetian names the next target and Madame Albany agrees.

A Philidelphia apartment and Moe Rizzi is letting his wife know he will be late as he is going out on Order business. Too late is his wife’s warning to Moe to be careful as the Venetian magically attacks Moe through a bathroom mirror killing him as Madame Albany appears from the shadow and tells Moe’s terrified wife Carmella that she must convey a message to Leonard Moonstone… He is next!

Well first of all this comic is absolutely beautiful to look at. Olivier Coipel’s art is pure gorgeousness from front to back even when it’s just a panel of a house with some trees next to it all the way to the menace of the masked and white-eyed face of Madame Albany.

It’s a completely real and believable world even as Dave Stewart injects mood to every page with his use of color for that noir feel. We continue to fall further and further down the rabbit hole as the story moves forward at rapid pace and while we learned a great deal in this issue about the motivation of Madame Albany and her allies it feels still very much like we the audience are really being brought in in the third act and we playing catch up in this ready-made world that Mark Millar has pulled us into. That’s not a bad thing.

As I have remarked before I like the fully formed worlds Millar creates. there’s a fantastic synergy to this book from the team and it makes for a smooth and engaging read that leaves you wanting more at the end of the issue. This book is pure cinema and I think that’s a very large part of its appeal.

Well written, beautifully illustrated and colored there is nothing not to like. this book is quite literally magic

We learned a lot about certain characters motivations this issue, At this stage, the main villain is for me the biggest curiosity… How did she leave the order and why does she wear that full leather head mask? I have a feeling we will learn soon enough…Can I get a time eater to eat the time between now an the next issue?