Commanders in Crisis book 1: Multiversal Sepsis and the Untimely Demise of Empathy

Commanders in Crisis book 1: The Action 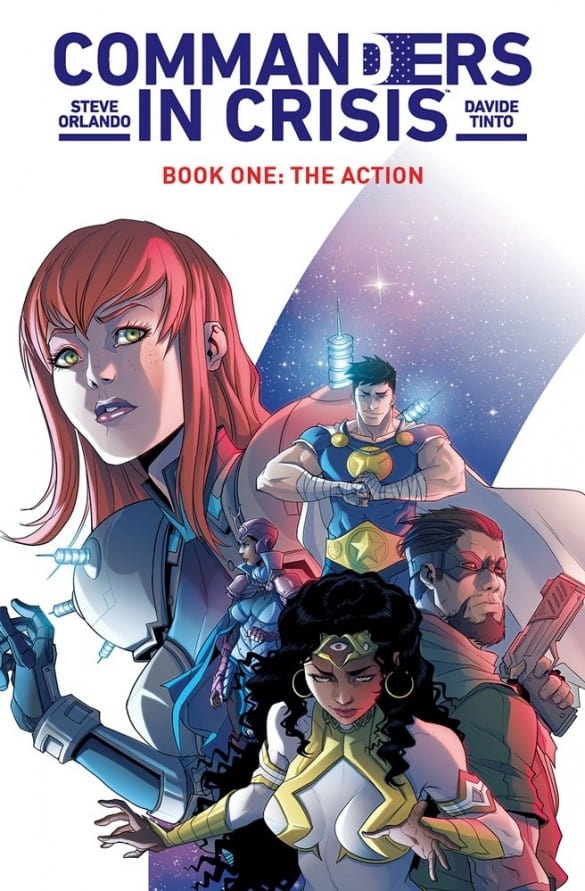 The Crisis Command comes together to protect the world... but that's just the tip of the iceberg. What sets this superhero team apart though? What if I told you.... the death of empathy and the end of the multiverse?

Commanders in Crisis is, first and foremost, a comic about ideas. Big ideas. Small ones. Day-to-day victories; common humanity, shared empathy. It’s about them in both in real-world terms, but also, as meta-commentaries on real-world issues and concerns. And, yes, it has super-people waling on each other, but that’s more of secondary concern to the bigger notions playing themselves out in CiC volume one, “The Action,” collecting the first six issues and first arc of this twelve-issue maxiseries.

Writer Steve Orlando is playing in some Grant Morrison-esque territory here, dealing with conceptual ideas made flesh, multiversal death, time travel, and so much more – but doing so in a way that is grounded and permanently tethered to the hearts of his cast of characters. Unlike Morrison, though, Orlando never forgets that his characters have real-life hopes, fears, aspirations, and so forth – something Morrison sometimes struggles to remember, especially in these latter years of his storied career. There’s no mistaking that Orlando’s characters are real people, with real concerns and feet of clay.

Frontier, Seer, Originator, Sawbones, and Prizefigher comprise the Crisis Command, a group of superheroes protecting the world from both itself and outside threats, such as the Mind Muggers, a group of time-travelers from the future whose goal is to steal our hope, because in their time, they have none. Each character has a very unique power set: Seer can read the future, but only for a minute at a time and to serious physical detriment; Originator can change reality for twenty-four hours based on her creation of new words; Sawbones can see the literal flaws inside of people; Prizefighter is only as strong as his audience hopes he is. Frontier is a tech-based heroine who is much more than she appears – no spoilers, but her secret changes the story’s trajectory in a major way.

So far, so straightforward, right? Inventive, but what’s the hook? The bombshell is this: the entire multiverse has collapsed except this one Earth due to “cosmic sepsis,” meaning every other earth was so irredeemably toxic that the multiverse itself deemed it ineligible to continue existing, and eradicated it. Each of the members of the Crisis Command is the last survivor of that Earth, and must now fight to not only protect this final Earth, but also influence the course of humanity toward a positive outcome so that it isn’t erased, too, leaving only yawning cosmic entropy.

Orlando fires on all creative cylinders for Commanders in Crisis, tapping into powers he’d hinted at during his tenure at DC but was seldom allowed to exploit to their fullest extent. As an Earth not too unlike our own barrels toward oblivion, the writer ups the stakes with the literal death of empathy, and if that weren’t enough, sets the story against the backdrop of a movement within Congress to de-centralize the United States into a loose coalition of nation-states, based on a toxic twisting of the notion of individuality. Orlando doesn’t shy away from holding a mirror up to the current state of right-wing politics in America; while the previous POTUS isn’t name-checked or anything so obvious, his recurring themes certainly are. Orlando sees this moment we’re still struggling to emerge from in the United States and isn’t afraid to call it out for what it is: an abrogation of duty toward the common good, and a sense of entitlement that doesn’t just border on narcissism but manages to turn it into a warped virtue.

Along the way, Orlando manages to seed messages of sex positivity, LGBTQ+ empowerment, racial inclusivity, and gender equality. Artist Davide Tinto renders a world that is somewhat cartoony in stylistic approach that can catch readers a little off-guard at first, because their initial impression is that this is a more straight-ahead superhero comic. But that misdirect seems to be by design: the unassuming nature of the art means that with each layer of the story’s onion that is peeled back, the further the reader is surprised. In other words, just like with all things in Commanders in Crisis, don’t judge this book by its cover (or do, literally, because the covers are pretty gorgeous in and of themselves). And despite the inherent gloom and doom of the story, CiC’s message is ultimately pretty clear: we’re all in this together, and are stronger when we act for the common good. Empathy isn’t dead, but sometimes it takes good people willing to go against popular opinion in order to inspire a movement. And if that isn’t a message worth screaming from the rooftops at this particular moment in American history, I don’t know what is.

Commanders in Crisis is a comic that trades in big ideas and comes out ahead. It isn't afraid to go conceptually big, but never forgets the heart at the center of its tale. Check out the first collection today!

Commanders in Crisis book 1: Multiversal Sepsis and the Untimely Demise of Empathy