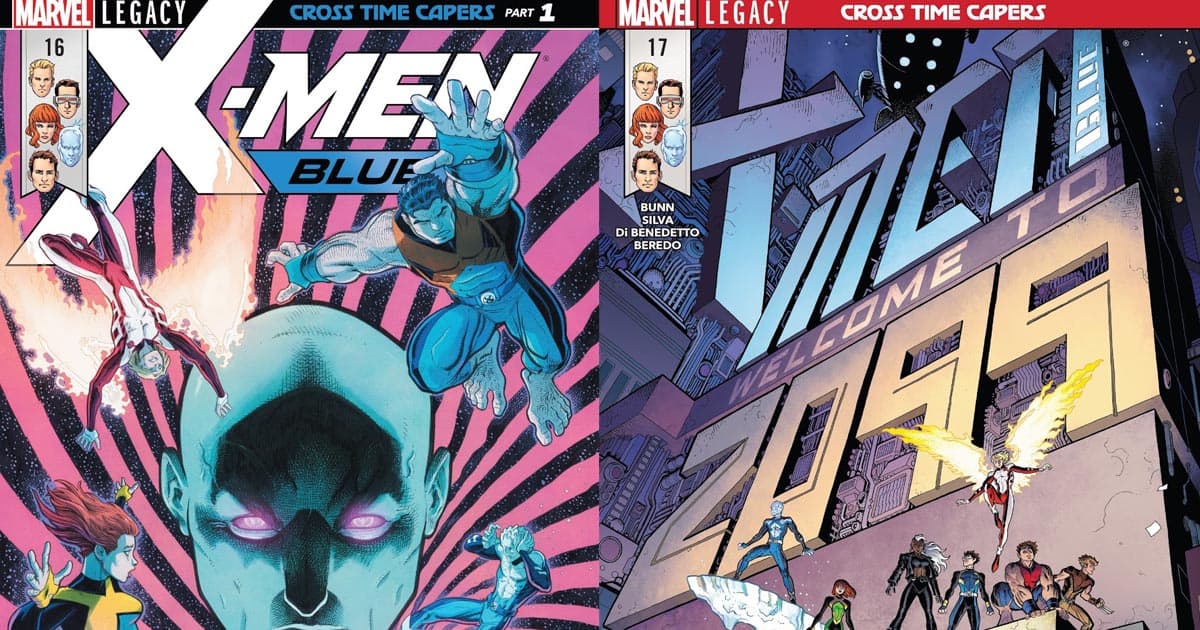 Magneto was right! He feared the time-displaced young X-Men would cause problems with time itself, and now the X-Men must return home! But where is their time machine sending them? 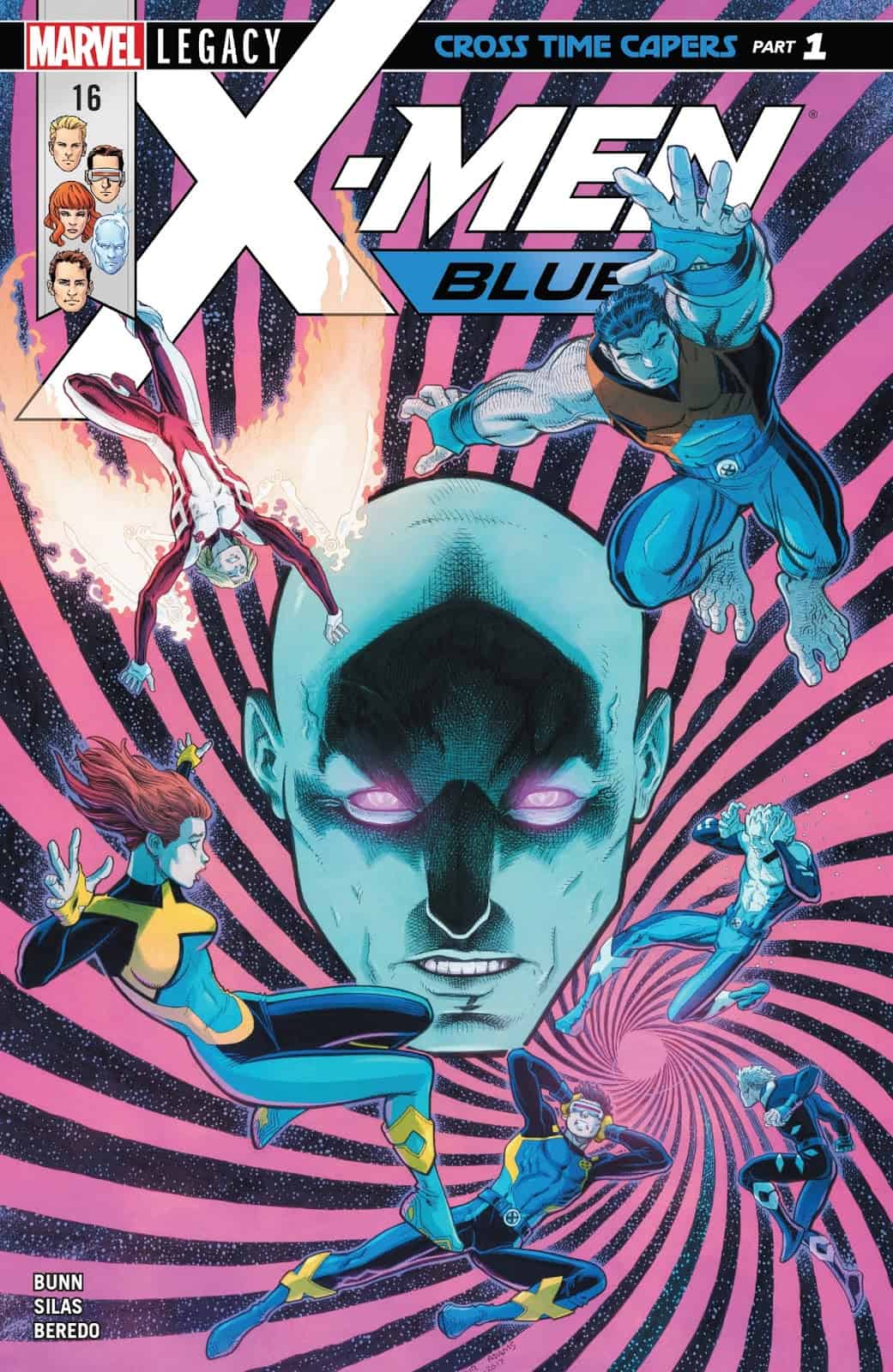 What you need to know:
Ever since Prime Beast brought the young team of X-Men to the main, Prime Marvel timeline, questions have hung over them: Will their presence damage the timeline? Will they go back home? At one point, they learned that they are in their correct future, but now that does not seem to be. After joining forces with Kitty Pryde’s squad of X-Men (and they, in turn, discovering Magneto is alive) to stop Mojo from taking over New York City (he got away though), The original five X-Men: Cyclops, Iceman, Angel, Beast, and Marvel Girl (their current deputy leader), now joined by 2 other time-displaced X-Men, Jimmy Hudson and Bloodstorm, have returned to their home in Madripoor. The X-Mansion has served as a secret training location and home for the five, under the guidance of Magneto, along with their “teachers” Polaris and Danger.

What you’ll find out.
Magneto is quietly reading in the library when he doubles over in agony; a victim of a psychic attack. But he’s answering back with a very cryptic question. 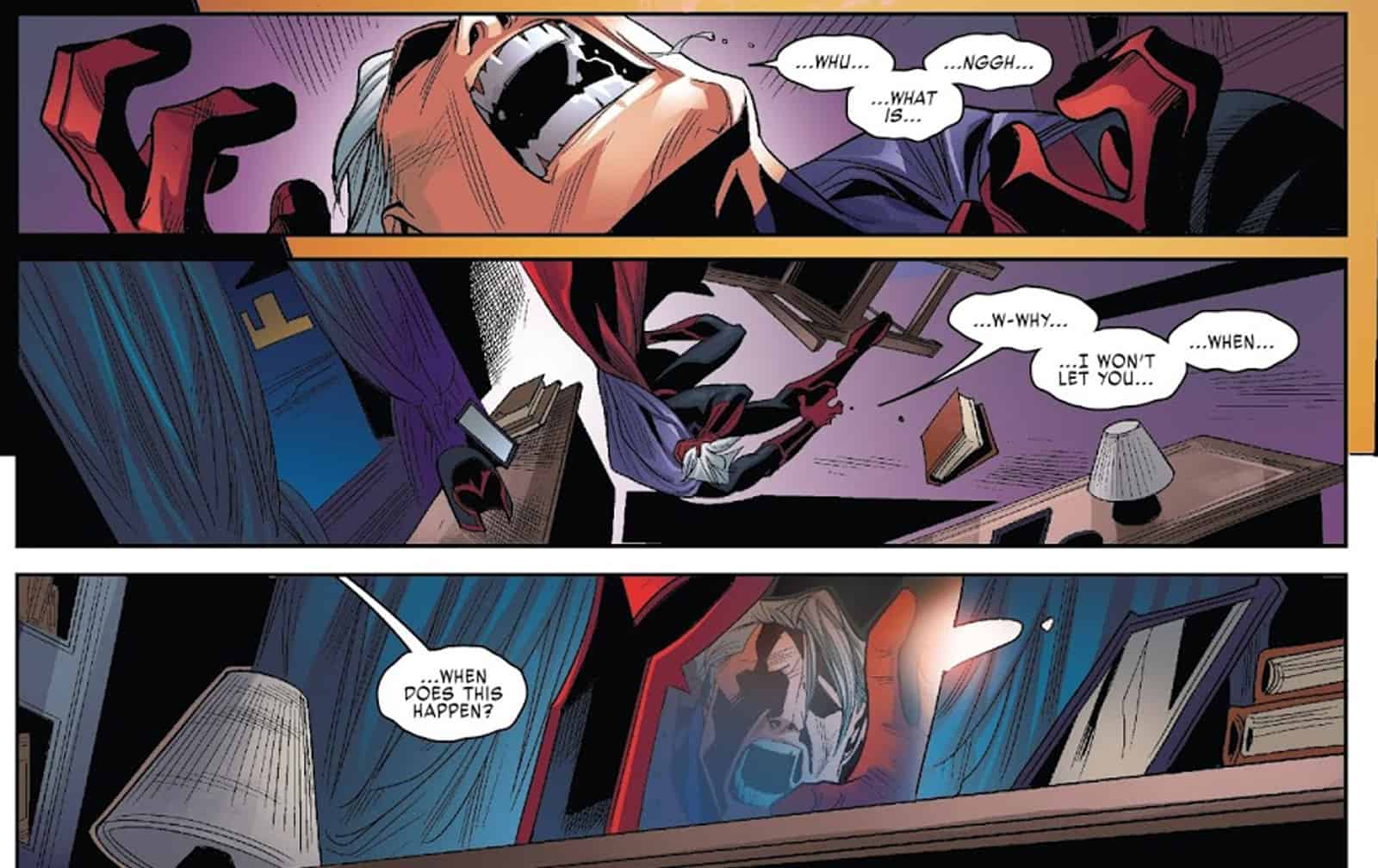 Cyclops and Bloodstorm are outside, getting to know each other. There have been a few hints of this pairing over the last few issues, and we are now seeing the real start of this couple here. 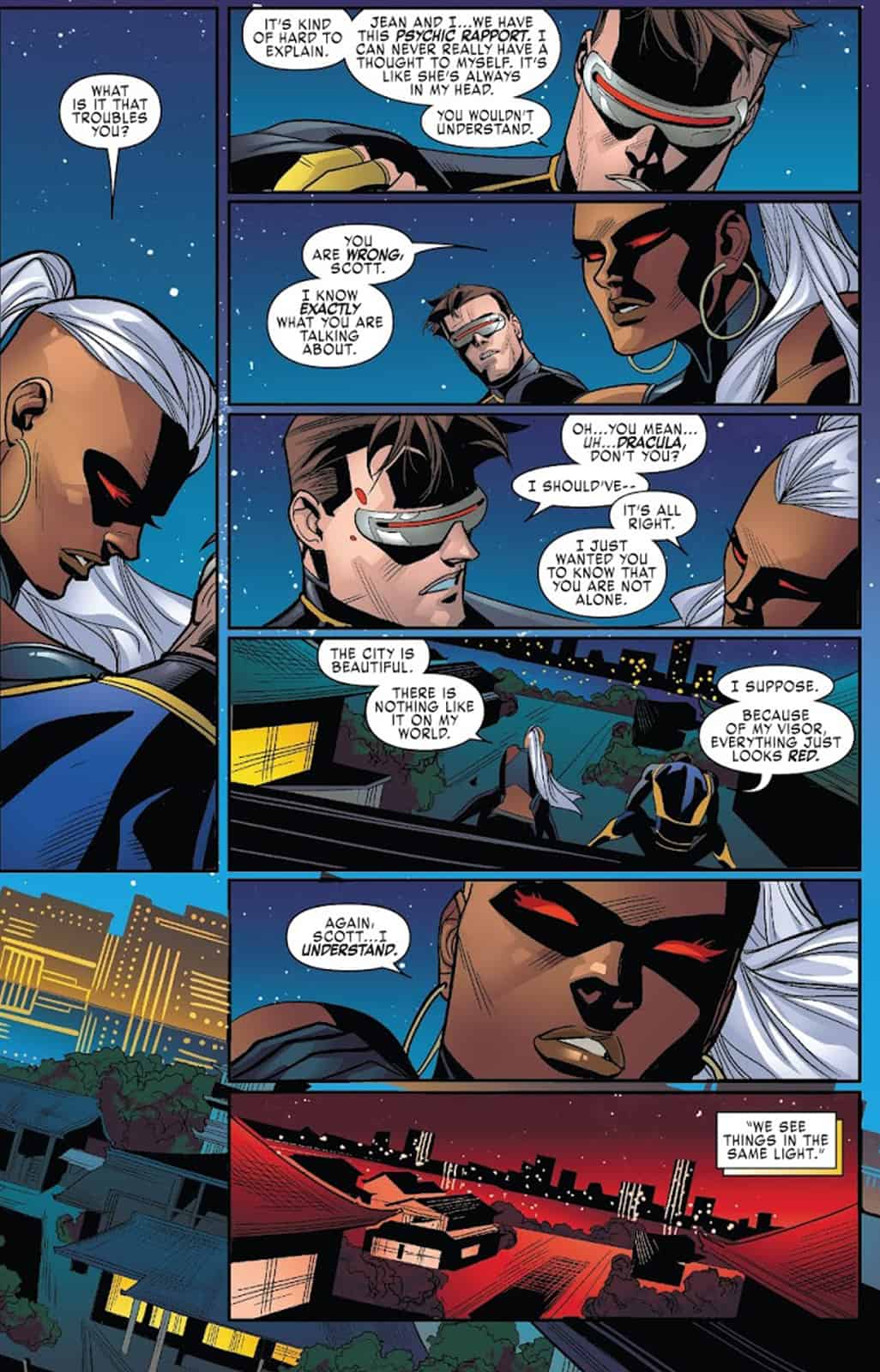 Alone, watching tv, Iceman is dumbfounded that Mojo now has a network broadcasting 24/7 on air. But a news bulletin gives him a terrible cause for concern. 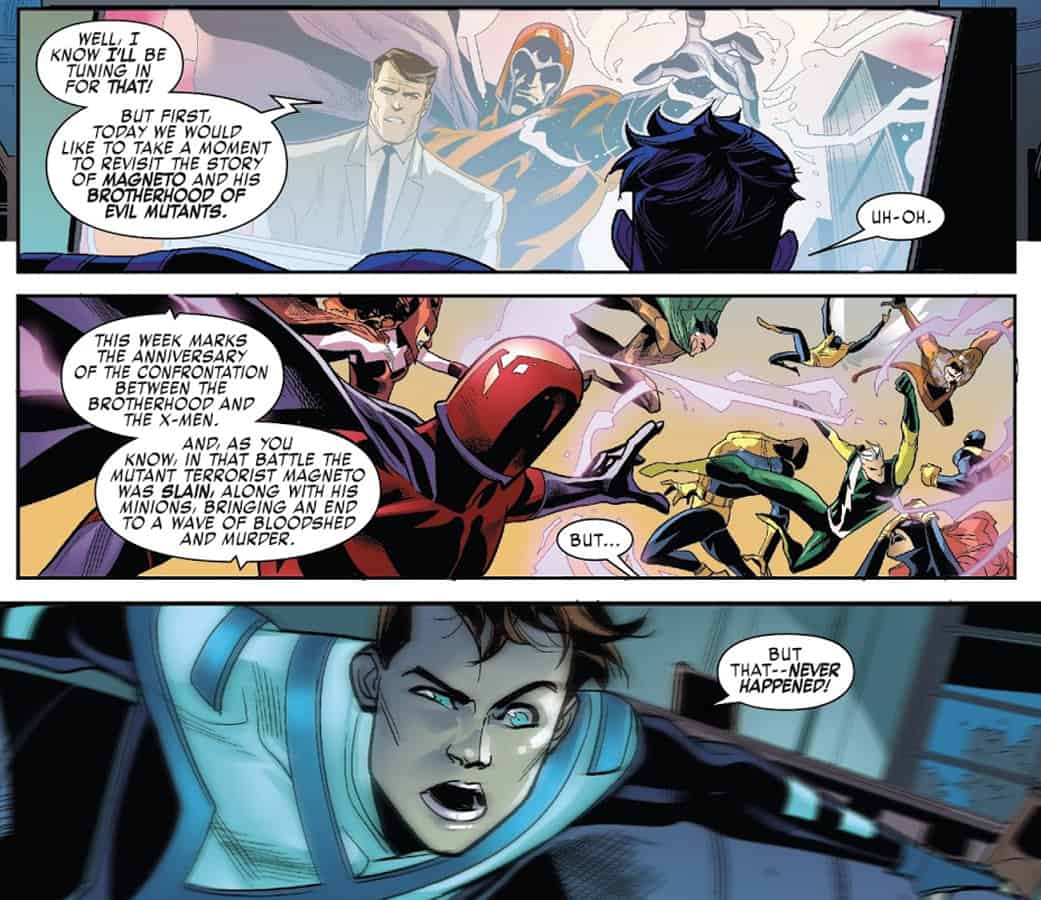 In the Danger Room, Polaris and Angel are sparring with Jimmy Hudson. Once again we are reminded that Jimmy is Wolverine-Lite but I feel this is setting him up for a very heroic exit. Polaris, on the other hand, has never shined brighter! The character is riding a much-deserved and long-overdue, wave in popularity. (Watch The Gifted on FOX and read our reviews here!) 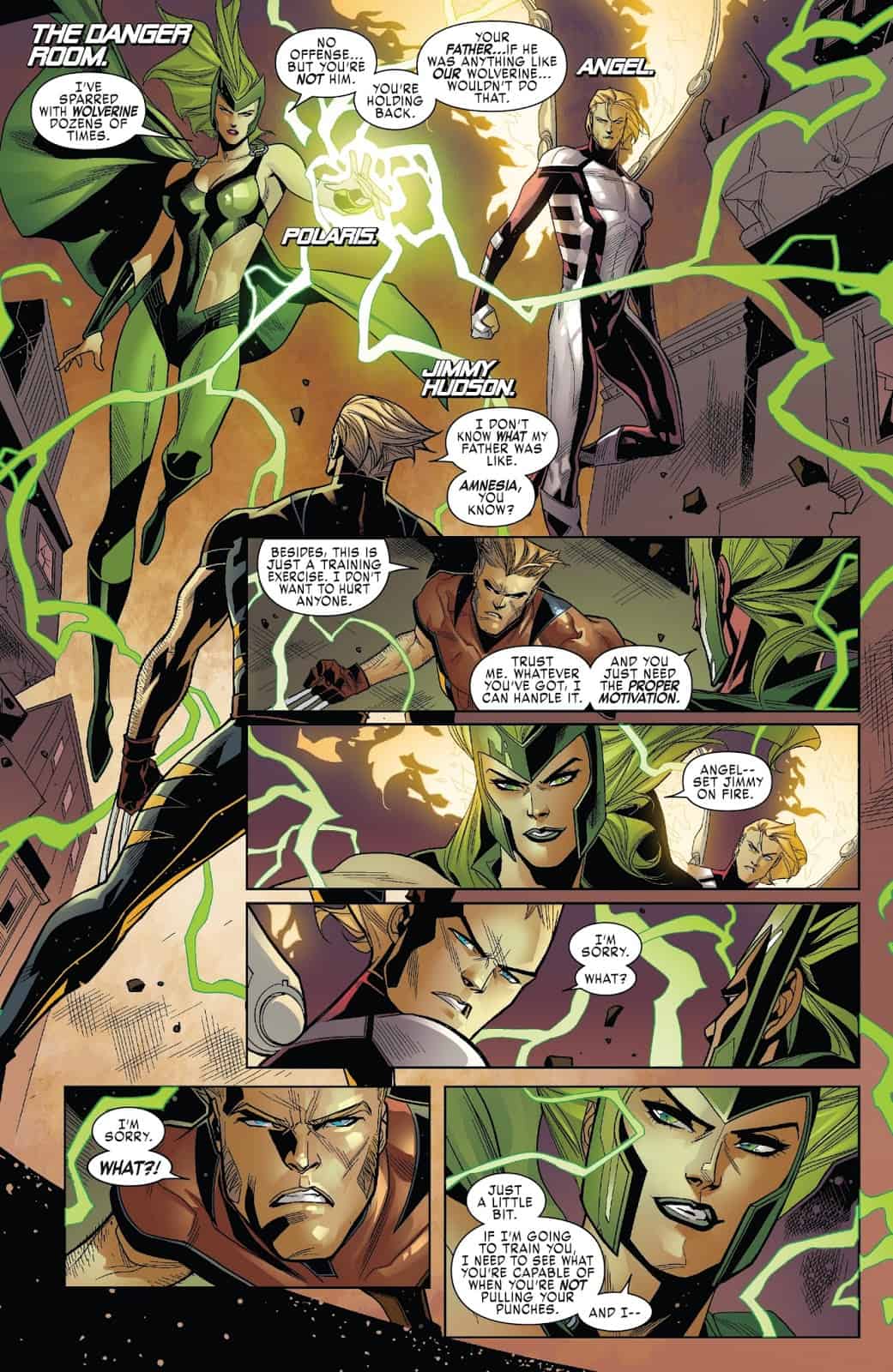 Suddenly, Polaris is attacked in the same manner as her father, but then she disappears in sparkles and smoke. Jimmy states he isn’t picking up her sent as if she were never there.
Jean and Hank are talking in the lab. Hank accuses her of only spending time with him, or any other member of the team when Scott is unavailable. But as Jean begins to defend herself, she is similarly attacked. This time, though, it’s indirect: she felt Magneto reach out to her, intensely. As they rush to his side, he commands Jean to read his mind, and she sees Professor Xavier! 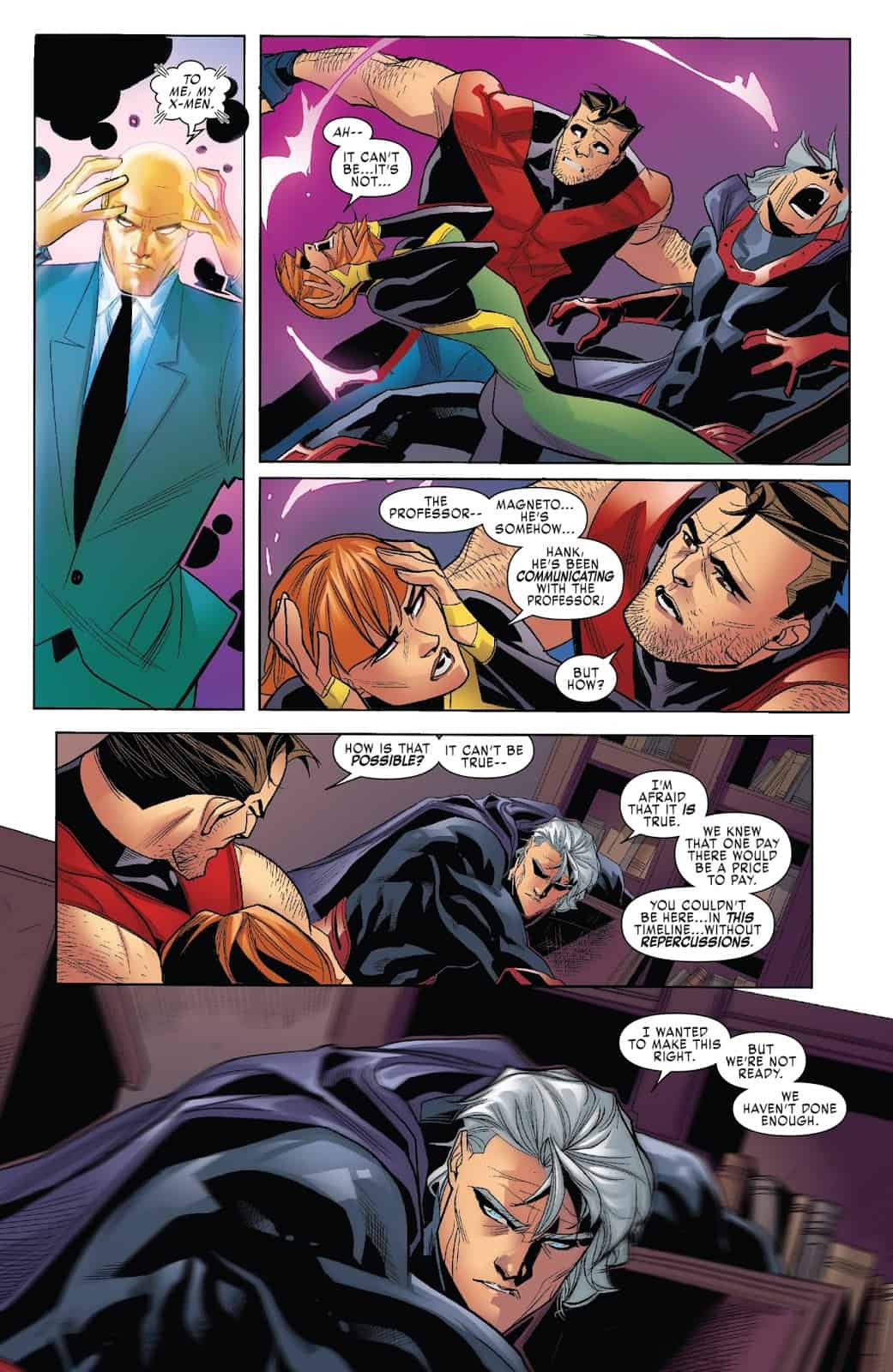 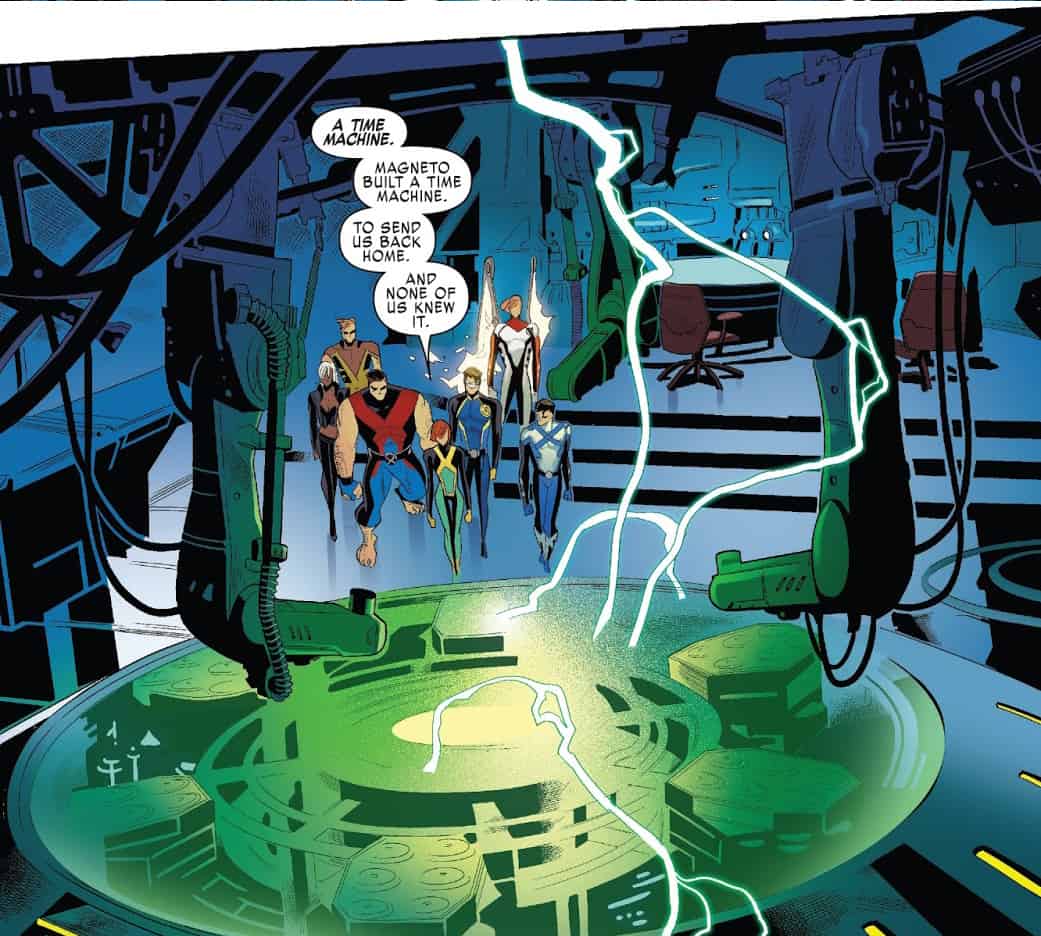 After time-hopping through several different, seemingly random moments, they stop and realize they are not home, but they are in the year 2099, and standing before them are that era’s X-Men. 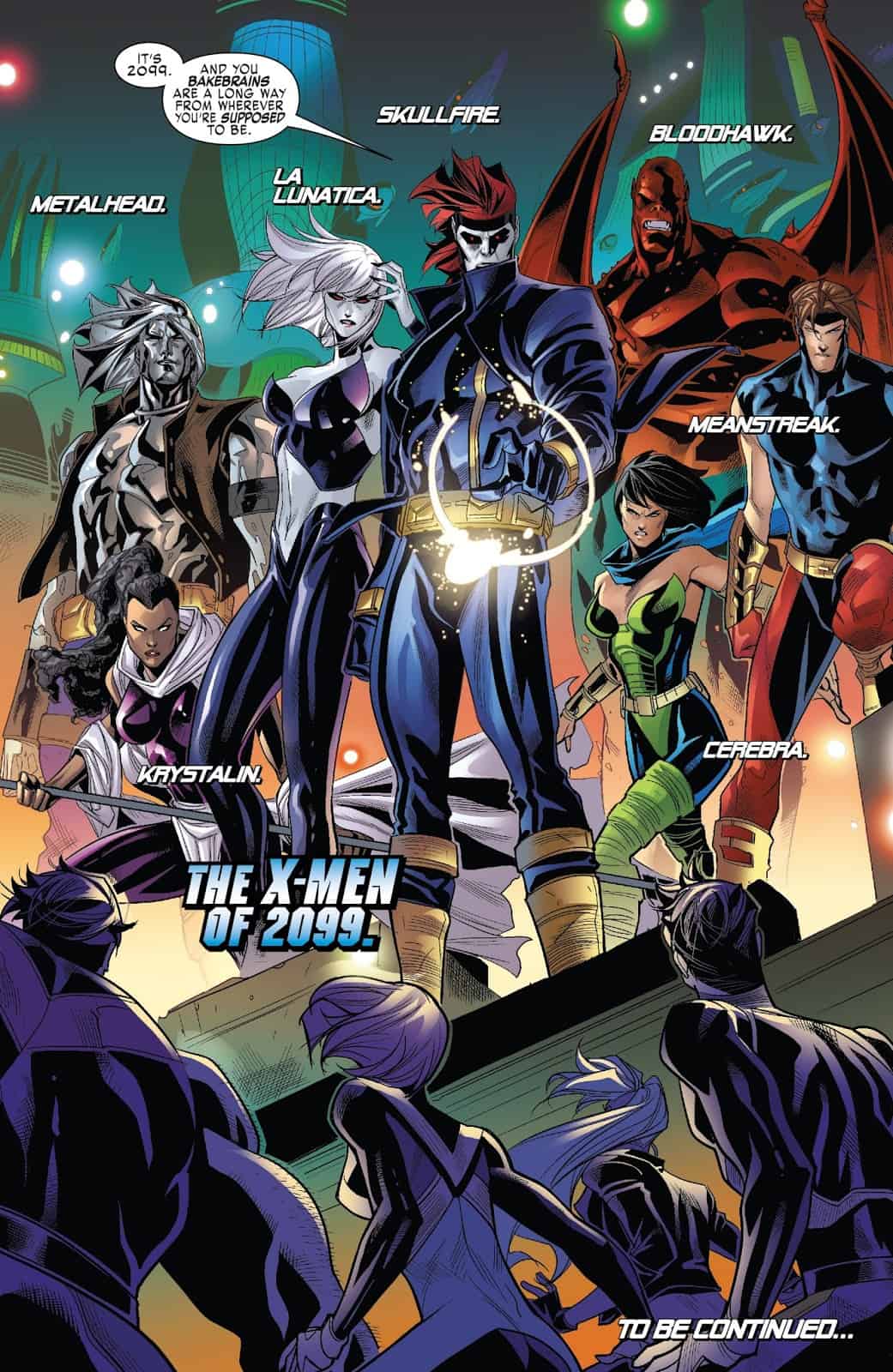 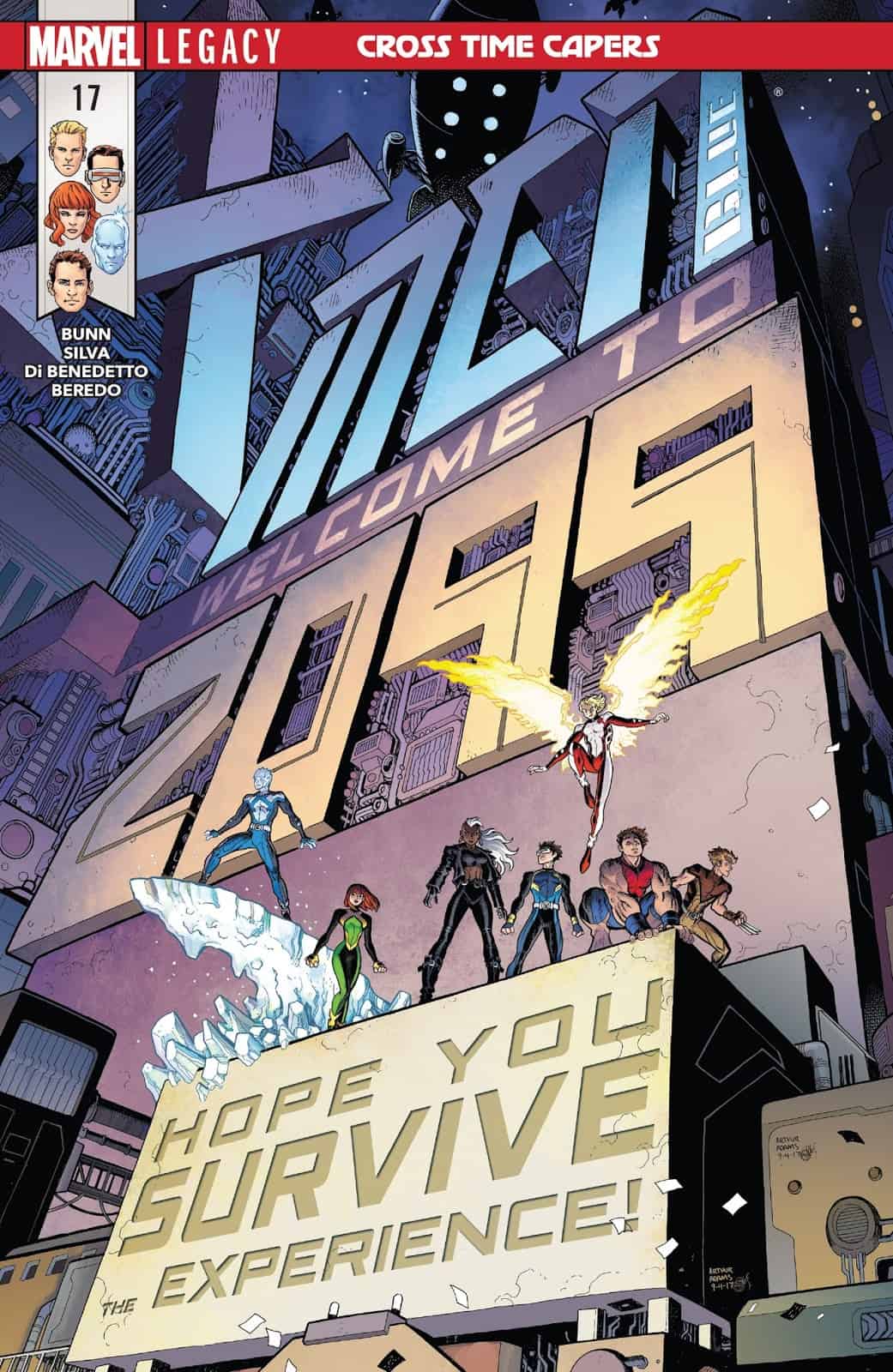 Just as the two teams decide they are legit, (although Bloodstorm senses the team of 2099 are hiding something) they are attacked by authorities. 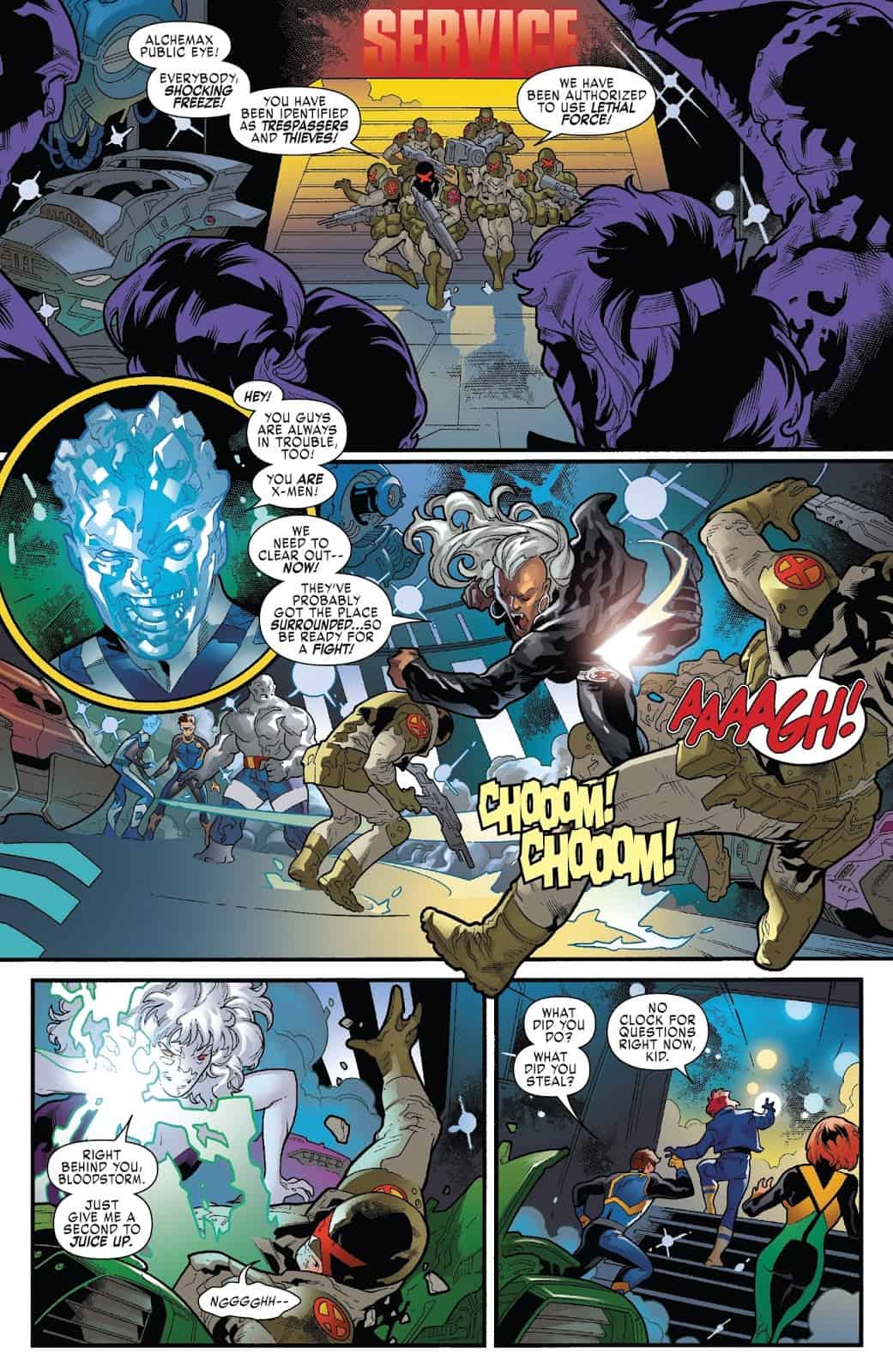 During the ensuing battle, Jimmy stumbles upon a monument to the original five X-Men, but all is not as it seems. 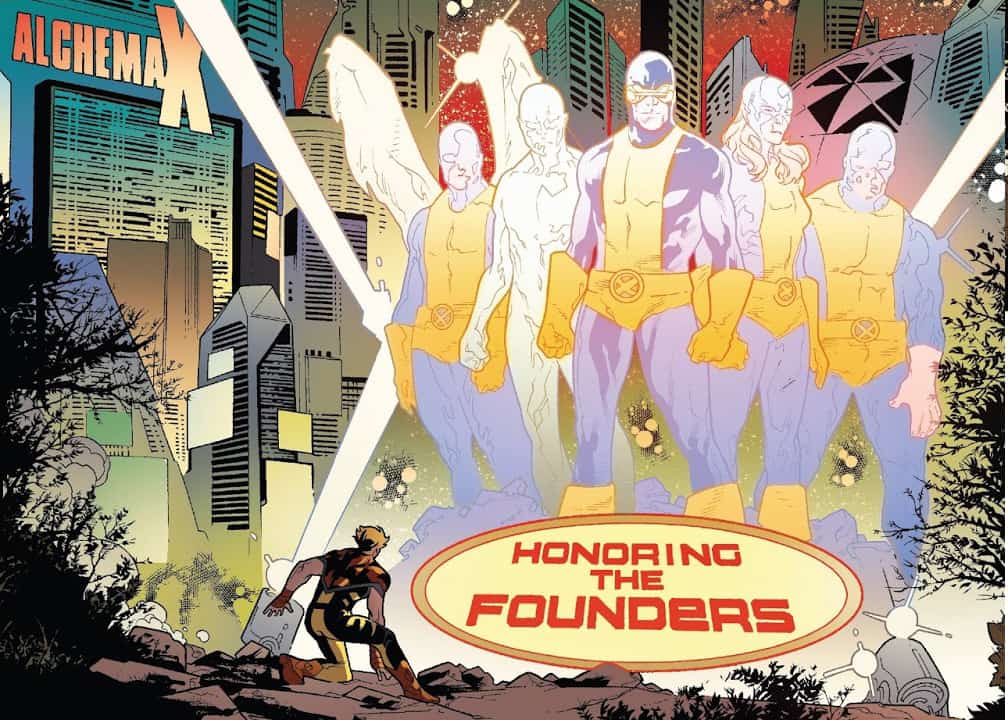 They learn of Alchemax and the distortion of their “legacy” in the form of his Onslaught, A Sentinel with the faces of the Original five X-Men. 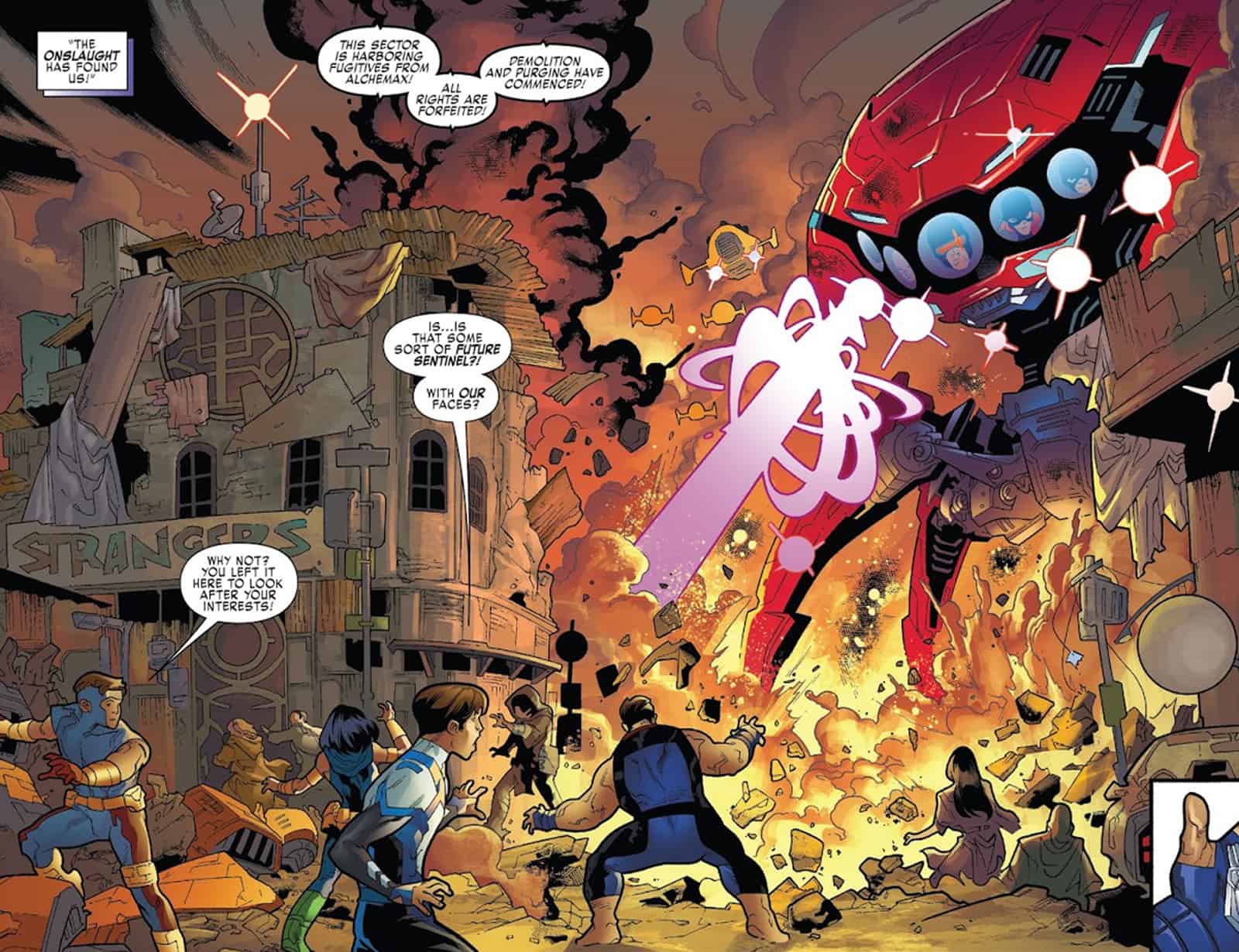 After Cerebra has made some adjustments to their controller, and they almost die while fighting the Onslaught Sentinel, Hank sends them back to the Xavier School for Gifted Youngsters and waiting for them on the lawn: the original Generation X. 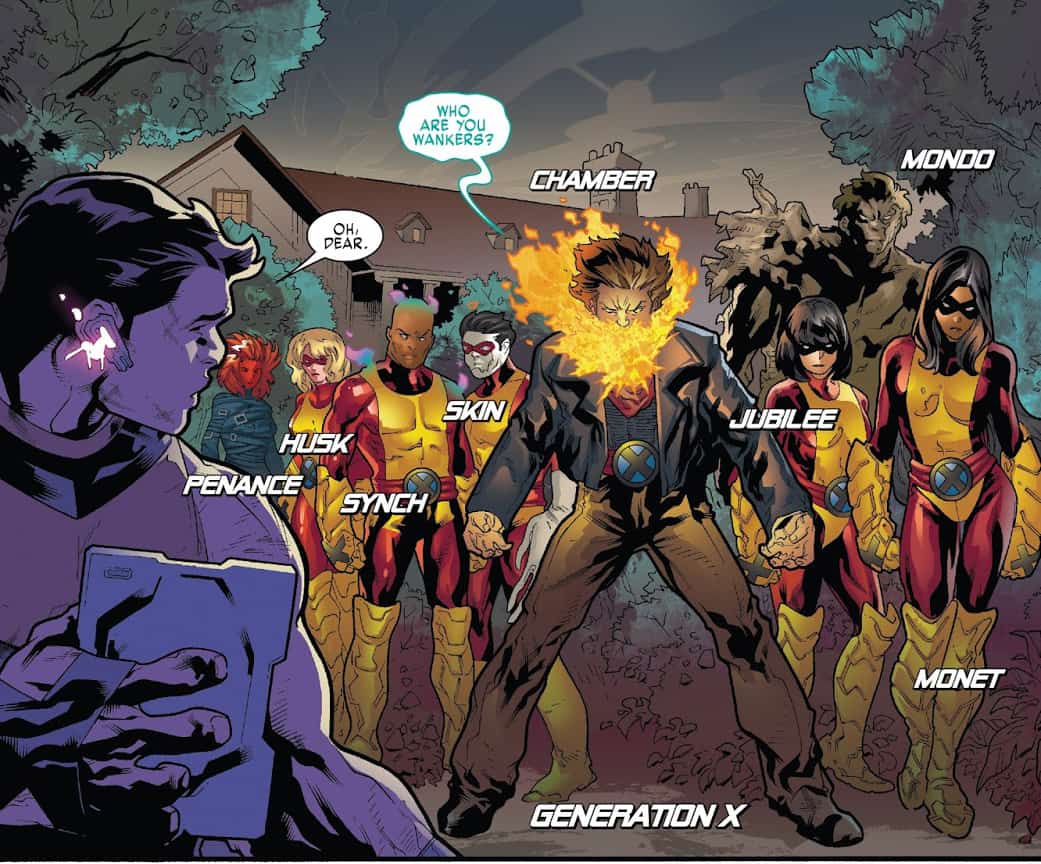 What just happened?
The title Cross Time Capers is an homage to the classic, Excalibur maxi-arc The Cross-Time Caper. One theory beginning to spring forward about the time-displaced heroes: Is this how they get to stick around longer? By acting as a modern-day Exiles? Will they continue to travel the multiverse in search of adventure? Possibly.

I like the “teachers” back home in Madripoor. Polaris is a strong character in this series. Danger continues to be an enigma to me, but I like her in this setting. Magneto’s portrayal is sincere in this story because we know Magneto was planning this all along.

I enjoy the blossoming friendships between Cyclops & Bloodstorm and Angel & Jimmy. Iceman throwing shade at Bloodstorm is perfectly keeping in-character at when he was younger. He did the same thing to the new X-Men when they first joined!

I enjoyed the art in both issues, although they are quite different in style. Consistent art teams are a rarity these days, but if we must endure ever-changing artists, the creative teams here deliver. I just wish they were given character sheets to stick to. 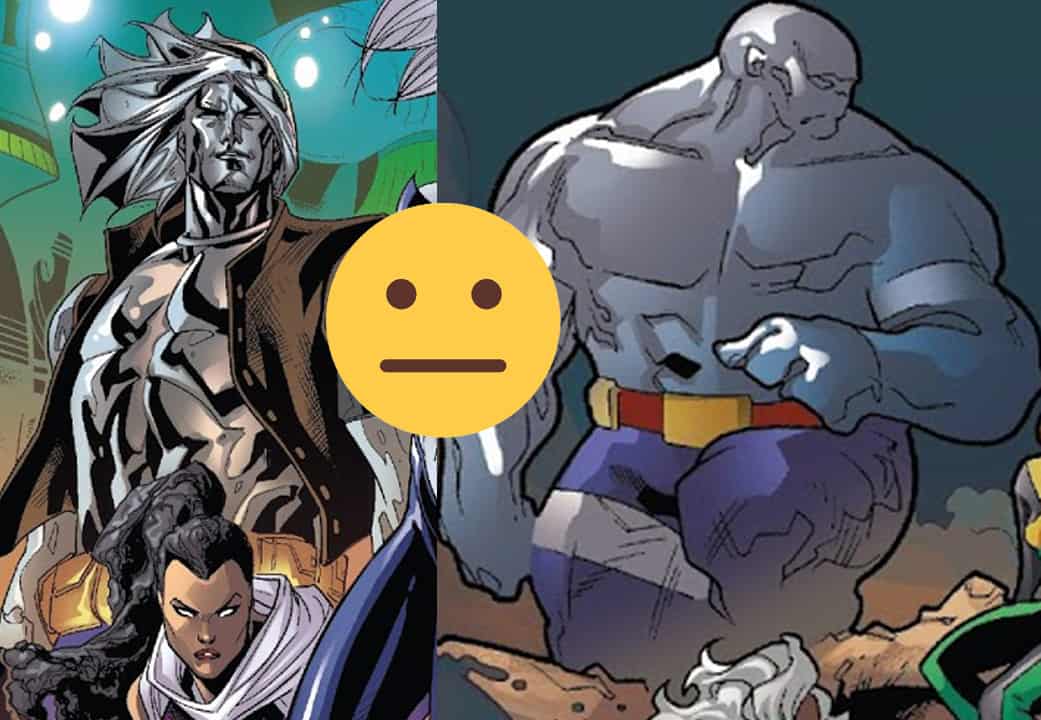 I’m not sure what direction this book is headed. With so many announcements coming from Marvel about returning characters, it’s hard not to speculate.

At first, I was hesitant to the idea of time-displaced O5. I’m a hard sell when it comes to multiple versions of characters running around in the same universe permanently. Mind you, if they lived in different universes and had the yearly team-up, I’d be fine with that. Maybe it’s the Silver Age fan in me, or maybe I just like the organization of it, or maybe those concepts and ideas have been played out? It’s interesting because while popular, it’s still very polarizing among fans. So far this title has managed to introduce new twists on familiar characters in a very intriguing way. There have been a few missteps so far in the run, but overall, I’ve grown to enjoy this book and look forward to seeing how they will ultimately handle the fate of these characters they’ve made me like!