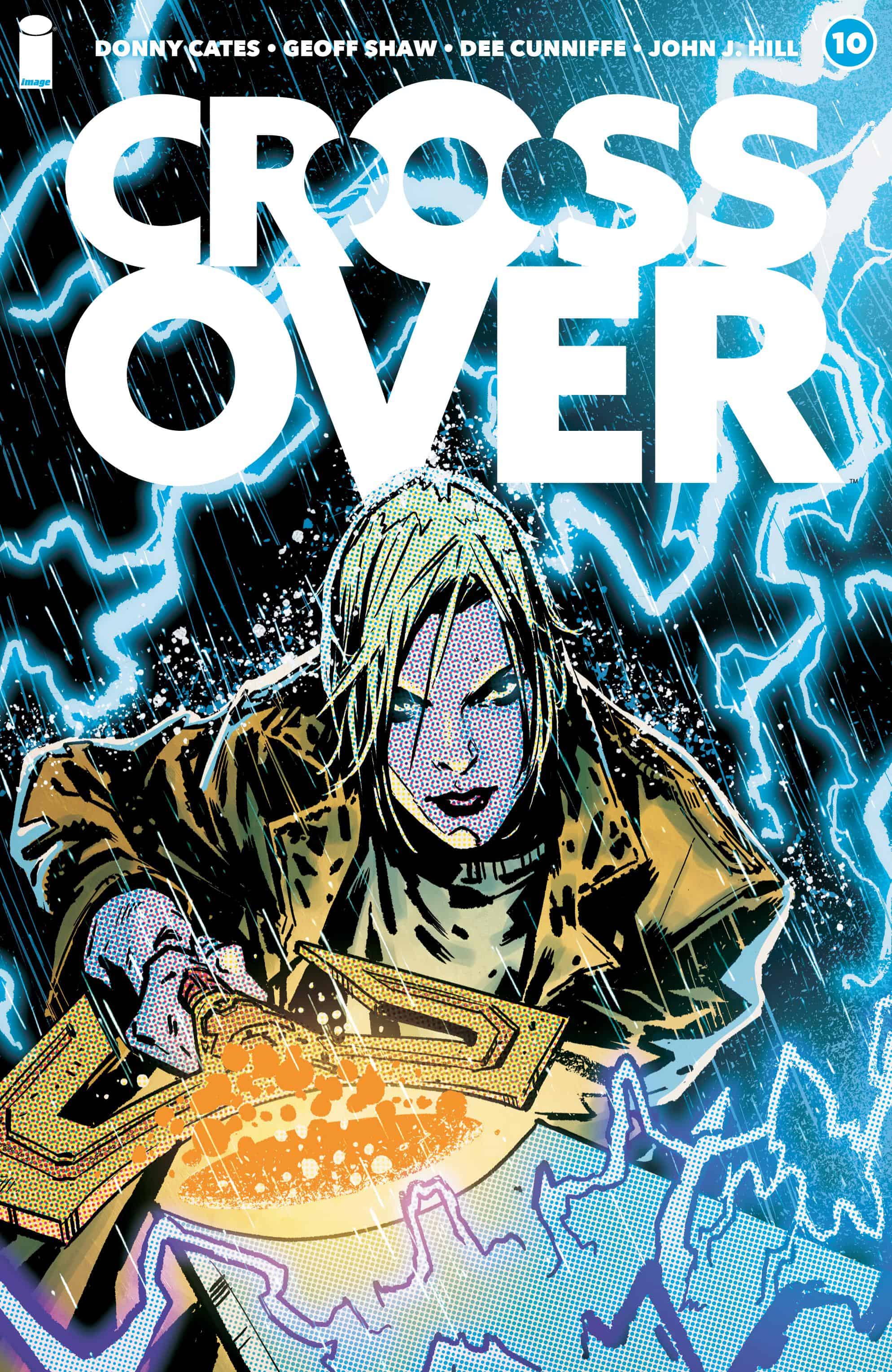 “Hey hey! We’re back with another mysterious slaughter-filled romp! And man oh man, is this one...honestly, guys, there’s not much I can say here without spoiling every single page. Look, I don’t know, guys. Writing solicitations is hard. Come read our crazy little book!!”

Metatextual stories always straddle the line between self-congratulatory and self-deprecating. A fourth-wall breaking character or a story that knows it is a story has to be handled with care, otherwise, it falls in the trappings of a cliché postmodern attempt at humour or subversion of structure. It’s why depending on the run, a character like Deadpool can either be refreshing and hilarious, or hacky and played out. The premise of Crossover is esoteric and an attempt at blurring the line between reality and story, and finds mixed results in that framework. Crossover #10, written by Donny Cates and art by Geoff Shaw, colors by Dee Cunniffe, and lettering by John J. Hill sees the script and art duties shared with Brian Michael Bendis, Michael Avon Oeming, and colorist Nick Filardi.

The book opens on a deliberate choice to engage with the book on a metatextual level, showing an image of the first page of the script with doodles and notes in the margins, then cutting to Shaw’s rendering of the script. It’s the first inkling that the book is moving beyond its use of comic book tropes and story elements, and is intending to bring in itself as a text in the world of the book. The group realizes that someone outside of the various creators of the characters crossing over is writing this story, and dictating the actions of the plot. It becomes clear by the middle of the book who the suspect may be, and is confirmed on the last page. It’s a reveal that logically makes sense for the series, but is a prime example of walking that line mentioned at the start of this review. It’s an effective cliffhanger, making the reader question if this suspect, and plot element, is going to feel natural in the story or if it’ll be a self-absorbed insertion into the story. It’s a twist that should be given the benefit of the doubt but is a little on the nose.

The team of Bendis and Oeming reunite for an interlude featuring their creator-owned characters from the series Powers. Bendis himself is no stranger to metatextual and fourth-wall breaking beats in his comics, having used the narrative technique to reinforce how insane the Purple Man appeared in his critically acclaimed Marvel series Alias. The interlude in this series sees Bendis being interrogated by the detectives from Powers and is later joined by Oeming, as comic book creators are being murdered across the country. It’s a fun break away from the main plot, and the charm and humor of the sequence is a standout bit in an otherwise middling issue. The gift and curse of the series is the use of other creators, as the pit stops of Crossover are infinitely more interesting than the destination.

Shaw’s art and Cunniffe’s colors are still the triumphs of this book, perfectly balancing various comic styles while making a clear distinction between the ‘real’ world and the ‘comic’ world. The use of classic comic book aesthetics, specifically the Ben-Day dots, denotes that a person is not from the world of Crossover, but has traveled from one of the various comic book universes. That art choice, paired with a simpler color palette ensures that the comic characters always pop and stand out on the page, even when they’re fully integrated into a plot point unfolding. That contrasting style is highlighted even further in the Bendis/Oeming interlude, as the art shifts from Shaw’s to Oeming’s style from the original Powers book, indicating to the viewer that writing is also transitioning. It’s fun to see Bendis and Oeming riff in the pages of the interlude, and the gimmick does drive the plot forward, pushing the detectives and original characters to start looking at the larger picture.

Crossover #10, and the series at large, is a comic about comics, but sometimes loses itself in the attempts to be meta. It’s hard to get a bead on if the book is hacky or transcendent, and maybe that nebulous territory is enough to continue reading. The art and the fun Bendis/Oeming interlude are worth the cover price alone, and the world and premise are strong enough to drive the plot forward even as it sometimes gets bogged down by the seemingly clever smirk of meta-commentary.