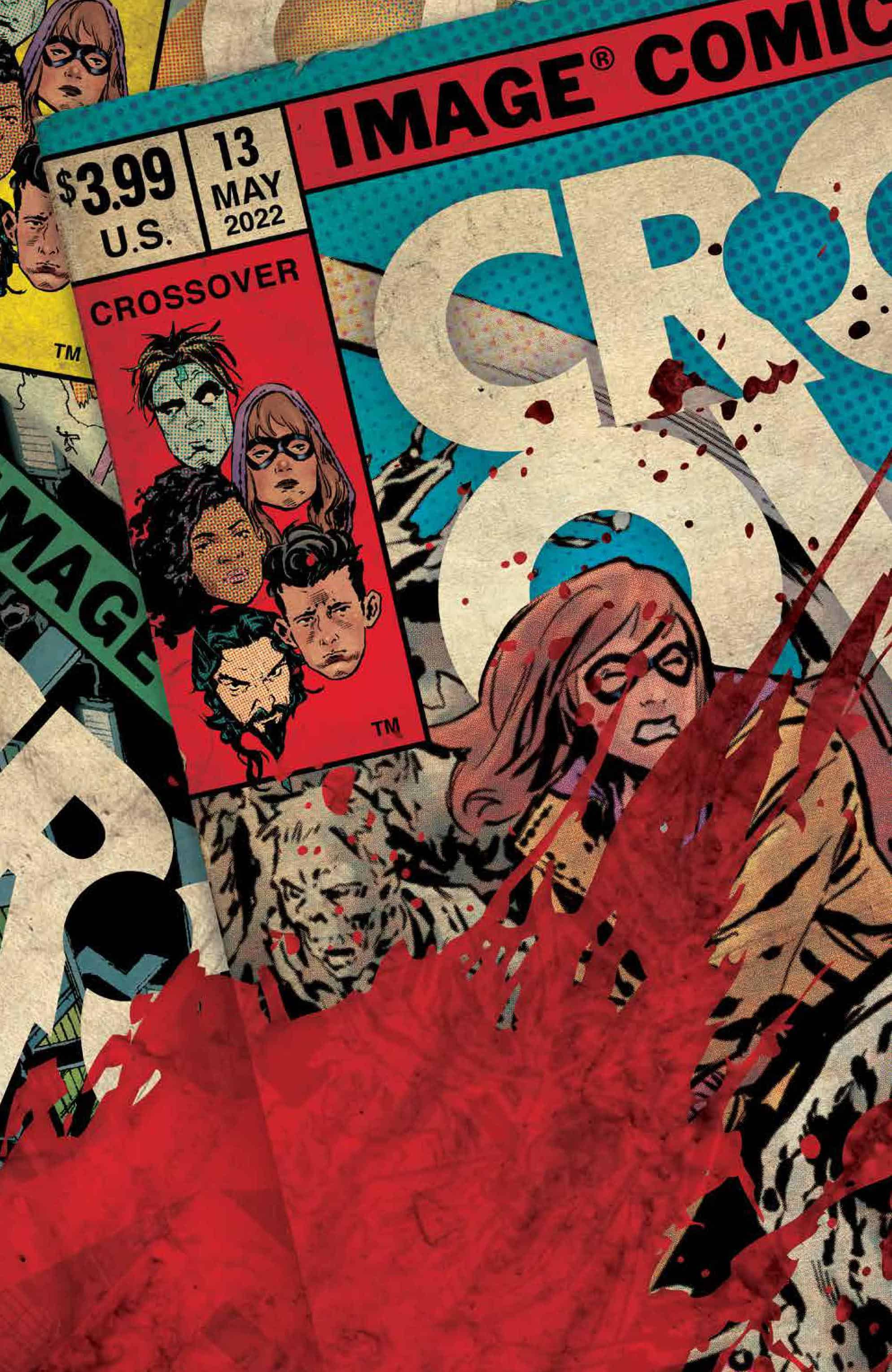 “MEANWHILE,” Part Six “This is it! The end of the line! The grand finale! Everything in your entire life has led you to this very moment, so that you may watch in horror and awe as the world of CROSSOVER comes crashing down in a metatextual waterfall of blood and ink and—oh wait. No. That’s the solicit copy for the final issue. What issue is this? 13? Oh. Haha. Yeah this one is rad. I’m in this one!” —DONNY

Stephen King describes in his memoir, On Writing that “All the arts depend upon telepathy to some degree, but I believe that writing offers the purest distillation,” explaining the phenomena of writers sending telepathic signals via dried ink on processed scraps of trees. The notion of creatives and audiences forming a psychic connection through art is a fascinating way of contextualizing the power of storytelling. In the same chapter of King’s memoir, he later goes on to discuss how the assembly of words can link minds and form similar images, passing from the writer to the audience. As King would describe it, “books are a uniquely portable magic” and it should be fair to say that most creators, in comics and beyond, would have to agree.

Crossover #13, written by Donny Cates, drawn by Geoff Shaw, colored by Dee Cunniffe, and lettered by John J. Hill, picks up a little further into the future, with a dying Donny Cates narrating the end of his fictional avatar’s life, and providing a context for the reason behind his writing. Ellie, Negan from The Walking Dead, and the Reverend battle in the background of Cates’s monologue as the book’s plots converge and reveal the looming antagonist (a brilliant move from the Cates of our world). The script catches up the plot to Cates’s death scene, and ties together the violence between characters with the demise of what the characters believe to be “god” or fraud with godlike powers.

Cates’s script and captions are some of the most powerful words from recent comics. Cates weaves his words into the fabric of the story and actually incorporates his personal history into a vital plot point. It’s an inspired and deft flourish that beautifully illustrates the raw, primordial power of storytelling, and embodies King’s theory about writing as telepathy. It feels almost insulting to try to recap Cates’s words, as it would create a degraded, secondhand psychic signal. It’s something that needs to be experienced firsthand and dares anyone reading to not be moved in some way, shape, or form. The words are powerful enough to stand on their own, but pairing them with Shaw’s linework, makes the storytelling powers of both Cates and Shaw sharpen to a new level. In terms of King and the lingo of comics, the pair working together rivals that of an Omega level mutant.

Shaw’s art is stunning and dynamic, blending various styles, characters, and universes in a way that feels in line with something like Into the Spider-Verse. A common scene of this issue features characters from Powers, The Walking Dead, God Country, and Crossover originals, with each character retaining their distinct visual styles. Shaw’s pencils move across universes with inspiring deftness, showcasing his ability to not just incorporate, but stylize and excite those various elements into a cohesive rendering on par with Cates’s words. It’s that power art that feeds into the book’s revelation and is a perfect way to establish the looming element of the artist in a world filled with comic characters coming to life, and writers coming to an end.

With Crossover #13, Cates and Shaw release a cathartic wave of psychic imagery and emotion through their craft. The power of story is on display in every page, caption, and line, and resonates in a way that feels like a true revelation. Cates boils down a very personal desire to a gut-wrenching plot point and propels the series into its next arc. After the rich tapestry of Cates’s personal experience and beliefs, it will be fascinating to see Shaw’s response and influences in future issues. For a series that on the surface feels like a cheeky wink and nod to the conventions of the industry and craft of comics, the sentiments shared in these last few issues have embodied King’s notion of writers as telepaths.