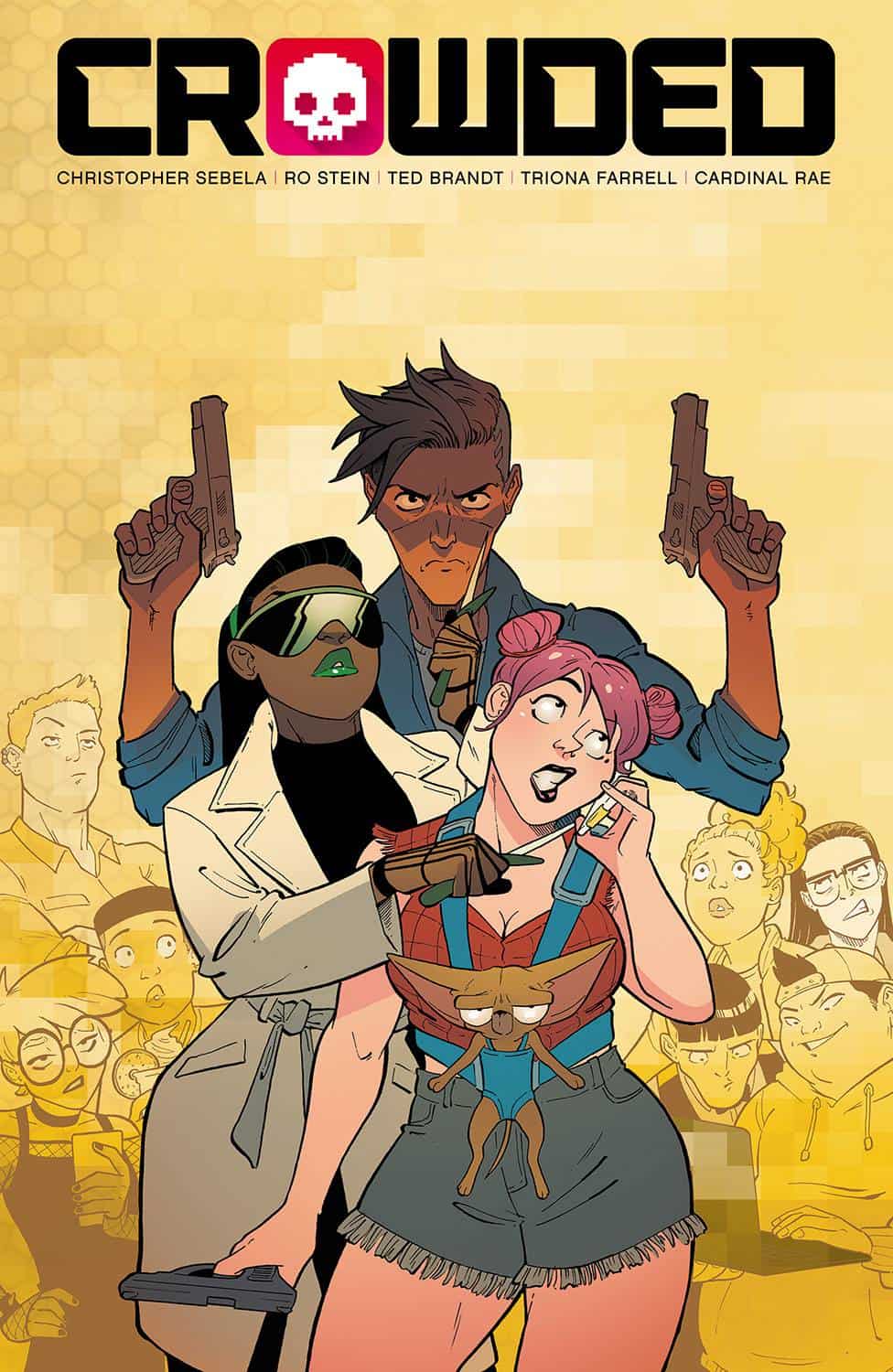 Fired and ditched by Charlie, Vita sets off in hot pursuit of her former client and some answers. But Charlie’s not alone. She’s hired a brand new bodyguard, Circe, unaware she’s a killer who has been stalking Charlie since her crowdfunded assassination campaign began.

As this catastrophic throuple cat-and-mouses its way across America, feelings and knives and secrets will come out, including who started Charlie’s Reapr campaign and why everyone wants her dead. All leading to a bloody showdown with the shadowy group responsible for turning Charlie’s murder into a viral sensation.

After what seems like an endless wait, the final volume of Crowded is finally here and every bit as stylish, funny, action-packed, and heartfelt as readers have come to expect from the series. Crowded’s final act is reminiscent of watching an Oceans movie or an episode of Leverage as its offbeat anti-heroes Charlie and Vita face off against their final foe (Nexus Specialty Corporation) with the help of allies new and old — like the assassin Circe. 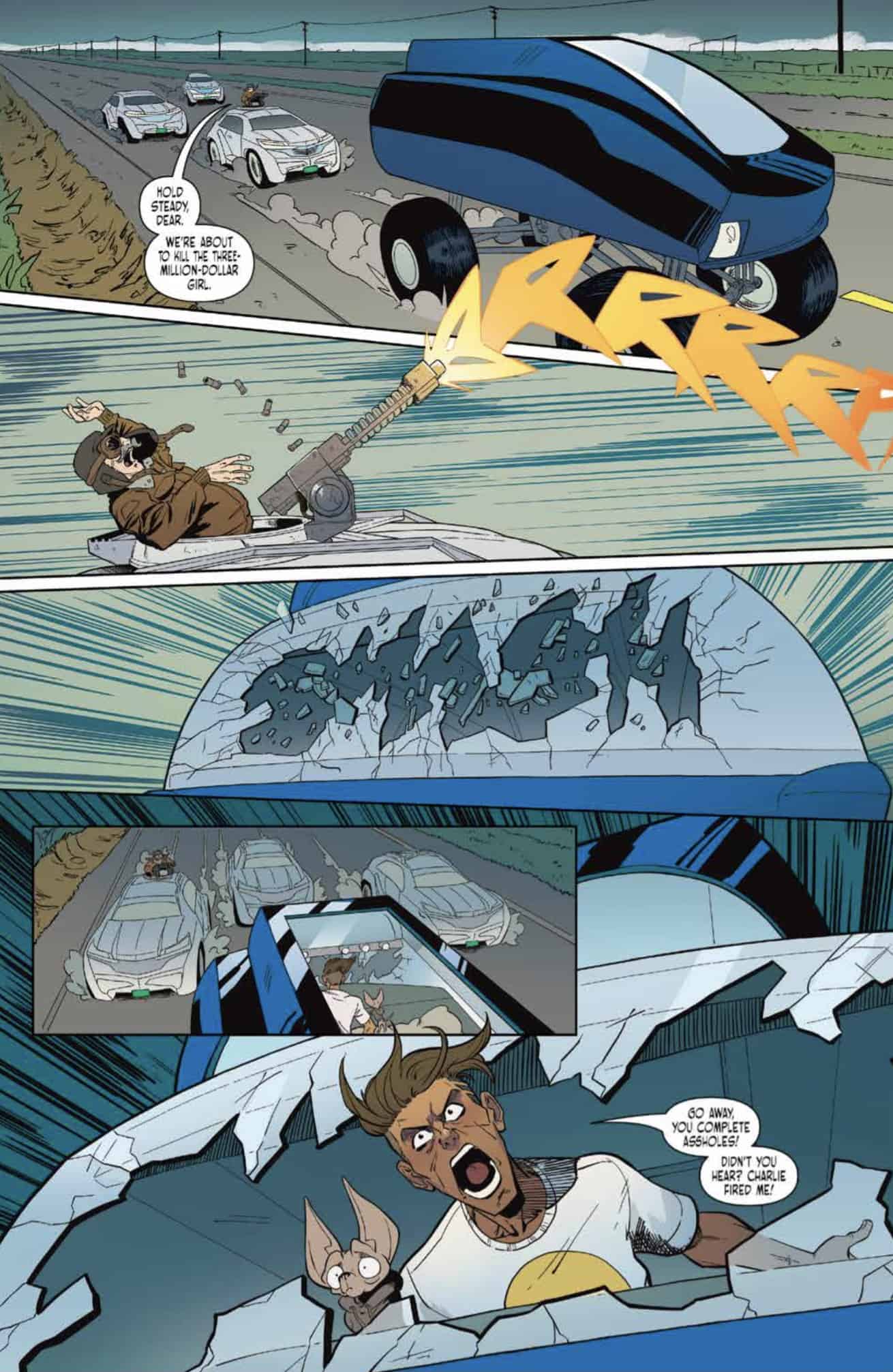 Artistic duo Ro Stein and Ted Brandt make every page of Crowded a treat. Stein and Brandt are talented cartoonists and every character — no matter how seemingly trivial (security robot, Boomer bounty hunter, etc.) — feels like an individual. Because characters are incredibly expressive and dynamic, a sword fight and an argument in a camper feel equally volatile and attention-grabbing. Christopher Sebela’s dialogue is fast-paced and funny, deftly balancing quips with sincerity, all intensified by the lettering of Cardinal Rae.

Stein and Brandt also have a great sense of playfulness: fight scenes and car chases (of which there are many) creatively incorporate onomatopoeia: as examples, the impacts of bullets are shaped like BANGs and a car’s window shatters to form the word SMASH. And whether its a delivery van with a “TedEx” logo (named for Ted Brandt) or a t-shirt saying “Fuck TERFs” in a shop window, this playfulness litters the landscape even when it isn’t the center of attention. Meanwhile, Crowded’s highly saturated neons and cherry-red blood splashes (where colorists Triona Farrell and Diana Sousa pack a punch) keep the comic feeling modern and fresh. 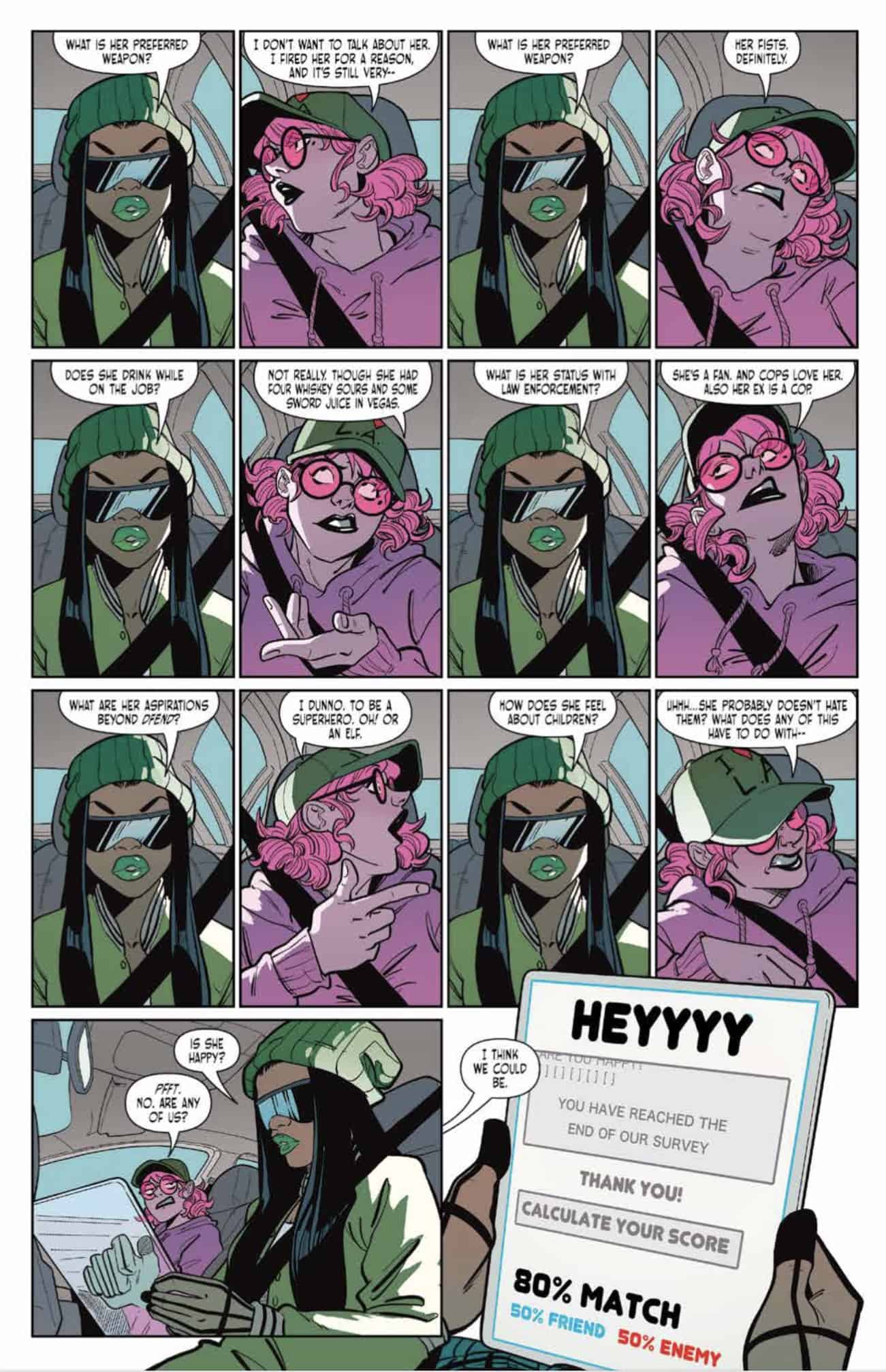 However, beneath its style and wit, Crowded remains an emotionally powerful comic as its narrative navigates the tangled lives of its messy main characters. Even a moment discussing what queer people often call “wife goals or life goals” becomes surprisingly moving. Not every concept, of course, is so fully teased out: Oklahoma (or “Oklahomo” as Charlie calls it) is a gay nationalist utopia in Crowded, but the comic never really digs into gay nationalism or what it means to create a queer nation-state on colonized land. (Oklahoma rather famously was the focus of a 2020 Supreme Court case that recognized 50% of the state as Native land.) That said, it does mean that the comic’s audience is left plenty to chew on. At its heart, Crowded affirms both queer characters and queer readers by showing a world in which queer people deserve happiness and love, but recognizes that finding both is often a struggle. While not idealistic, it shows people in general as complex and often deeply flawed, but nonetheless deserving of opportunities to change and grow.

The finale, in keeping with the series, is filled with twists and is an incredibly satisfying farewell to a vibrant cast of characters and one of the best queer comics — perhaps simply one of the best comics — of the last five years.

Crowded Vol 3 is a stylish, exciting, funny finale filled with twists & turns. It’s also a fitting farewell to one of the best queer comics of the last five years.