Wretched of the Earth! (Cyborg #19 Review) 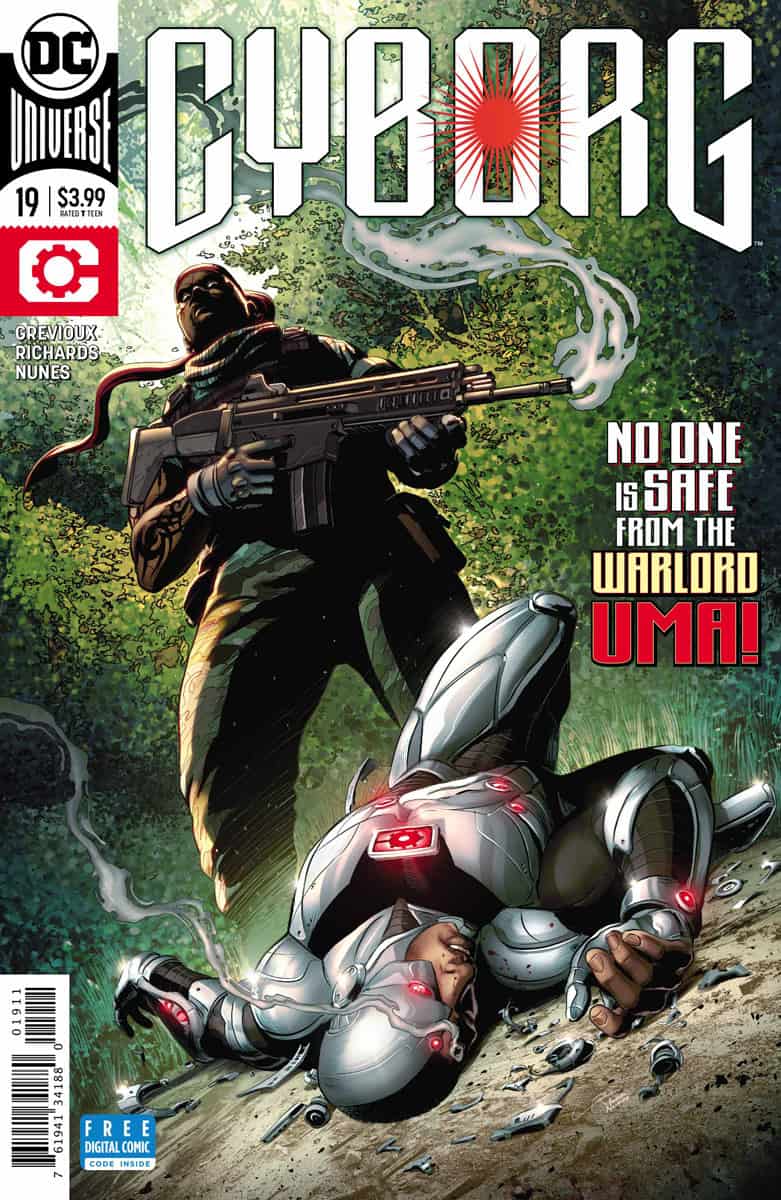 On a scientific mission in the Sudan, Cyborg encounters a genie who grants his wish to be fully human again! But when General Uma takes the artifact that controls the genie, Cyborg and Sarah Charles learn the dangerous consequences that come with magic!

This is the first issue of an all-new arc.  Cyborg and Sarah Charles are on a scientific expedition for S.T.A.R. Labs at a small village called Magnur in the Sudan.

Victor Stone and Sarah Charles are standing over a crater.  Sarah says her scans indicate the meteor inside it is full of diamonds, gold, silver, and platinum—to which Victor responds, “Stand back—we’re going to see what’s inside!” (Um…she just told you what’s inside.) He blasts the meteor apart.

Surprise; its contents are exactly what Sarah said they’d be.  Victor looks at other craters and again states the obvious: several meteors have fallen from the sky.  (We already know this because the artist drew the other craters right next to it.)

Cyborg bows his head and Sarah asks what’s wrong.  He starts complaining again about how he wonders how inhuman he is. Yes, this subject is raised again in this series for the umpteenth time. To quote Sarah on this same page: “How many times are we going to go over this?” For the record, it’s been almost every issue.

A group of underage kids starts to pick at the meteors filled with gems and precious metals.  Vic and Sarah yell at them to get away because it’s dangerous.  A mortar shell goes off and a battalion of G.U.R. (Guardians of the United Republic) soldiers attack ordering everyone to “Get away from the sky rocks!” That line makes the soldiers out to be morons like they never heard of a meteor.  They’re adults with Internet access in Africa during 2017, not cavemen wearing animal skins in 10,000 B.C.

Sarah then actually asks “Why do they have so much interest in the meteors?” to which Vic says he doesn’t know.  Right.  A battalion of guerillas in a third world country suffering from poverty, starvation, and warfare is after meteors filled with diamonds, gold, silver, and platinum.  How odd they would want all those gems and precious metals! Not.

Cyborg shoots at G.U.R. with his sonic blaster and they swear they’ll be back.  Nobody saw that coming.  Sarah picks up one of the injured children and says they have to help them. What Cyborg notices right away, though, is a souvenir of a rhino horn lying on the ground. Not exactly the first thing most superheroes do when there are injured civilians all around a bomb site. 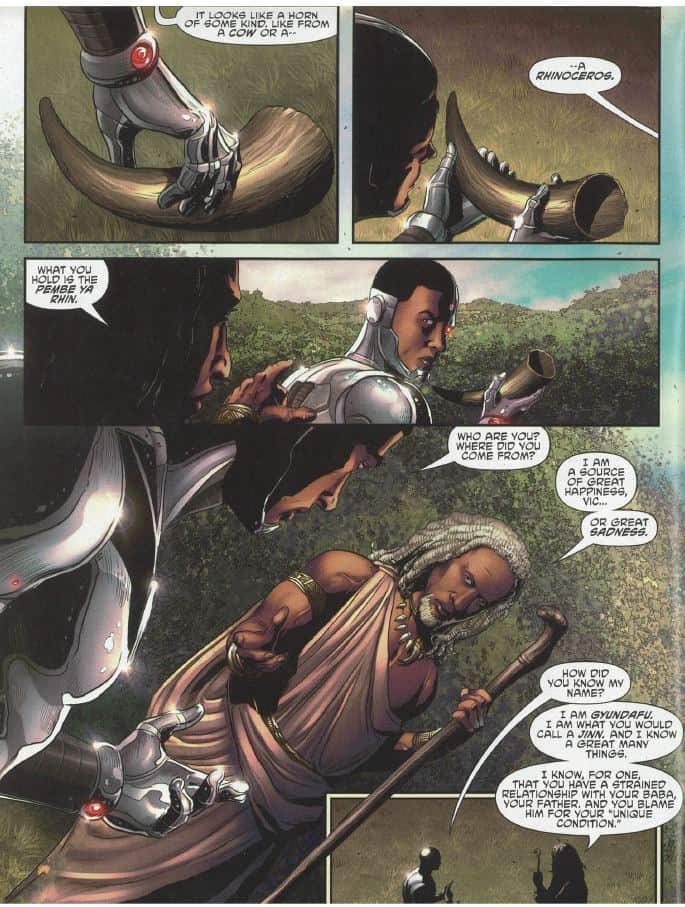 Lamest genie entrance ever. But more bothersome is why the genie needs to comment on Vic’s relationship with his father.  As soon as he raises the subject, he drops it in the very next panel. Why go there in the first place if it has no relevance to the plot?

Vic answers yes, he really wants to be human (AGAIN?) and so the genie turns him human.  The genie warns him to be careful what he wishes for.  That statement is yet another tired cliché.  It doesn’t help that Sarah repeats the exact same warning in the next panel.  And she asks why he was told by the genie to be careful in the next panel.  Um, did Sarah not just hear herself make the exact same warning to Vic 5 seconds earlier?

All sarcasm aside, is there some editorial edict for the Cyborg monthly book that all characters must repeat things others have said 2 or 3 times in a row?  Because it happens in almost every issue!

The G.U.R. soldiers return and start shooting at everyone; Vic is immediately hit.  Now we meet General Uma who orders them to find the magic rhino horn.  When his soldiers can’t, he agrees they should just take the diamonds and metals from the meteors.  One of the kids, Nkose, is crying and General Uma tells him it’s okay to cry.  But Nkose denies he’s crying, though he admits he killed some men while making wishes with the rhino horn.  Uma reassures him that he did the right thing and takes him to dine with his troops.

Cyborg wakes up in a clinic with Sarah beside him.  A doctor named Nailah tells him he almost died. (Again with these clichés? Seriously?) He asks about the kids and Sarah says Uma took them.  Nailah explains to them that General Uma is the leader of the G.U.R. Army and he only cares about power and money. Did either Vic and Sarah or we the readers really need to be told the bad guy is the bad guy?  It was obvious from the character’s actions; no one needed to be told. 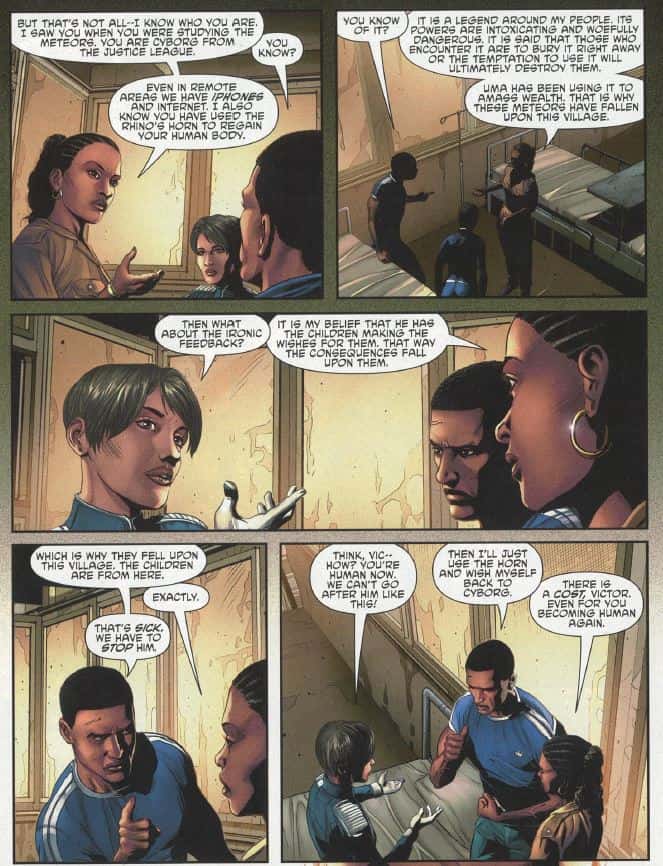 That whole page was a waste of paper.  There is no good reason to have Nailah mentioning who Cyborg and the Justice League are; that people in Africa have cell phones and the internet; that using the magic rhino horn has consequences (which we’ve been warned about 5 times so far); and that there is a cost for Vic to make a wish with the horn again.

The constant repetition of names of characters, motivations of characters and how things work is unnecessary, dull and adds no value to the story.  If anything, it dumbs the story down to the level of prepubescent children who need everything explained to them.  Teens, young adults, and adults are going to remember what happened earlier in the book; you do not need to repeat things 3, 4, 5 times or more.  Comic book readers don’t deserve to be talked down to like this, not even if they’re children.

Nailah, Sarah and Vic head for the G.U.R. camp in the jungle.  Vic does have one interesting insight that he didn’t appreciate all the advantages his super-powered Cyborg body had, which is a nice change from the endless complaining and whining both writers of this series have had him do endlessly throughout the series.

When they get to the camp, General Uma is trying to make a young boy named Omar kill a grown man who won’t join G.U.R.  Vic stumbles in, does not immediately get shot (which is ludicrous) and is instead punched in the head.  That’s not even remotely plausible as they shot him right away on sight earlier in this very issue.

Uma orders Omar to take the horn and if he won’t, he’ll cut off his sister’s ear. Omar does and wishes they were all free of Uma.  Vic screams “NOOOOO!” as the kids run out of camp and right into a minefield.

Unfortunately, it’s yet another poorly written issue of Cyborg.

I’ve noted all of these problems in my other reviews of this series.  Plot elements, names of characters, actions of characters and events that are depicted by the artist yet are described by the writer are repeated 3 times or more, sometimes all on the same page.  This dumbs down the story to a level for grade school children, but even they deserve better writing than that.

General Uma is a completely uninteresting villain.  His motivation is money and power and nothing more.  He’s mean and violent in predictable and unimaginative ways.  None of the African characters—not the G.U.R. soldiers, not the refugee children, not the doctor who saves Cyborg’s life—are given any compelling or unique character traits.  Everyone is either a bland cipher or a boring stereotype.

Cliff Richards has been one of the Most Valuable Players for Cyborg.  Along with Will Conrad, Paul Pelletier and Allan Jefferson, Richards and his colleagues have every month done their level best to elevate this book.  Coupled with superb colorist Ivan Nunes, the visual storytelling has been the absolute best thing about the series.

Final Thought:  Cyborg only has one issue left to go before this very under-written series finally ends.  I had high hopes for new writer Kevin Grevioux, but sadly he won’t get a chance to grow and improve with time as the book is canceled.  I wish him well and hope he gets another chance to spread his wings and prove his mettle on another book.

And I also hope Cliff Richards lands another DC series very soon.  He’s earned it.  But other than that, there’s no reason for me to recommend this book.  Better luck next time, Vic.