Damn Them All #2: Gotta Exorcise Them All 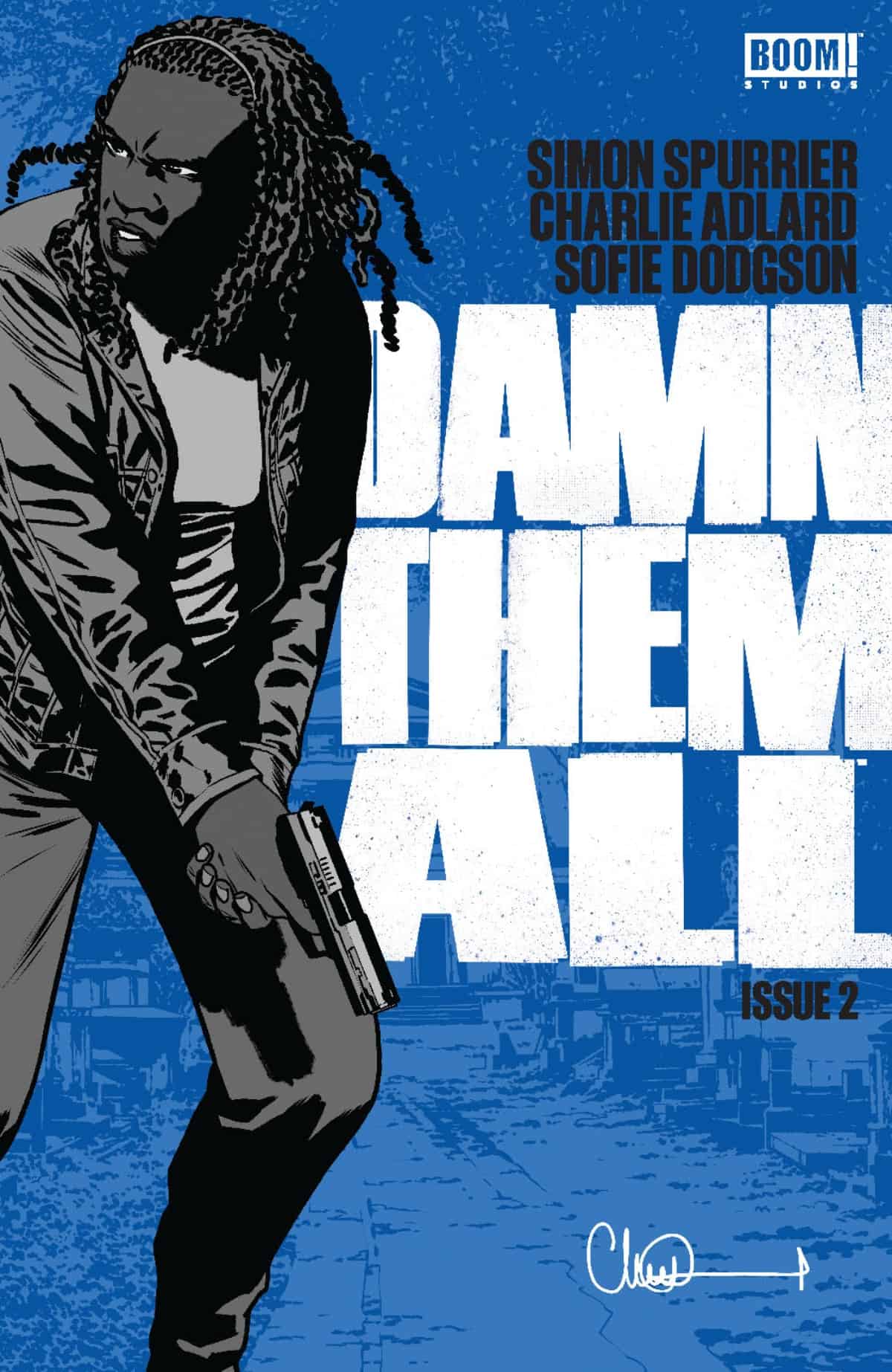 Dora, a detective traumatized by the same recent supernatural events as Ellie, is suspicious of the untimely death of Alfie-a man who helped her in desperate times.

As new terrors unfold, the two witness strange changes to the political landscape of Britain: a gibbering madness infecting the population.

Ellie fears the worst, and seeks the only thing she thinks can help.

A demon may be behind what's happened, one that predates even the Ars Goetia... and isn't so easy to control...

Good urban fantasy, which in a nutshell is a subgenre that places magic/fantasy elements into a modern setting, knows how to weave the two aspects into a cohesive story. The fantasy and modern settings both have to be more than window dressing for the other and need to work to the point of insight or innovation. For example, Buffy the Vampire Slayer subverts the tropes of high school coming-of-age stories, specifically the trope of the dumb blonde cheerleader. Damn Them All, the new urban fantasy series from BOOM! Studios accomplish that by speaking to issues like school shootings and Brexit, creating a rich tapestry that allows the fantastical elements to twist and propel.

Damn Them All #2 – written by Simon Spurrier with art from Charlie Adlard, colors by Sofie Dodgson, color assistance by Shayne Hannah Cui, and lettering from Jim Campbell – continues the merging of reality and fantasy from its first pages, detailing the harrowing events that led detective Dora Lafon to meet Alfie Hawthorne. The bit of exposition leads to El and Dora dealing with the clean-up of the last issue’s massacre before chasing down leads about the influx of demonic coins flooding the city streets. The plot is mostly set up for the world, deepening the setting of the series while establishing more rules that are thrown straight out the window because of the demons making their way to Earth.

Spurrier’s script for this issue starts with a gut punch, revealing that Dora met Alfie because of a school shooting that ended in only the shooter’s death but led to the guilt/haunting of Dora. The script injects plenty of mixed shades of gray with this sequence, showing Alfie’s gentler side while possibly exercising Dora’s demons (which may or may not be occult based). It’s an effective narrative choice that deepens the mythology of the world while grounding it in raw emotion. It mirrors the last issue’s use of Alfie’s death to guide the reader into the world and makes for an excellent entry into a world with simple but mysterious magical systems.

The remaining bulk of the script delves into the rules of this fantastical system and how they have degraded since Alfie’s death. El and Dora meet with Carlin – who’s described perfectly in a data page as a “total but useful wanker” – to learn more about the change in demon summonings. Carlin makes clear that everything has changed, and summonings have been switched to an easy mode. Instead of rigorous preparation and technique, a few simple shapes and a quick invocation are all the requisites for a higher goetic spirit.

He also reveals that the mainstream devils have all been claimed by occultists, and El has to reach outside the common texts to summon one. Spurrier reveals this information in a straightforward sequence, having El, Dora and Carlin discuss over tea, but the rich, snark-infused dialogue keeps the script moving. Spurrier’s mastery of the English language is a strong blend of mystical concepts couched in a layman’s vernacular. It’s not high poetry but more like the working person’s discussion of magic. Which reinforces the urban fantasy genre, giving the book a firm foot in the real and concrete as the trio discusses mystical elements of the world.

Adlard’s art matches the balance set by the script, mixing the occult images of demons and magical glyphs with a grimy, worn world. The linework sells this as a lived-in world, especially a life in England that has been hit hard by the modern era. There’re no sweeping establishing panels or idealized looks to the city or its inhabitants. From the first panel, the grit is clear on both sides of the pond, and while the demons and magic alter the reality of a page/panel, it doesn’t take away from the world. That stylistic choice speaks to the blue-collar aspect of this urban fantasy story and makes no compromise on that vision.

Even when Adlard does shift into illustrating the demonic figures or magical elements, the work does not conflict with the larger world. Dora’s ghost is a shadow missing a chunk of its skull; the demon El has bound is a fetal figure with marred flesh that creates its own source of illumination. These elements draw the eye towards but never overtake or disregard the situations around them. Even as a massive demon summoning occurs in the middle of a busy street, Adland still ensures that the city frames the occurrences.

The closest to a full break in style is in the summoning of Pruflas, one of the demon spirits from outside of the main list of beings. The arrival of Pruflas breaks away from Carlin’s apartment, and Adlard gives a backdrop of broken reality. The panel then moves into a reaction shot of the trio, affected by the coloring of the summoning, but back in the concrete. It’s an effective contrast that highlights the larger focus on the concrete world clashing with these magical entities.

The magic of this issue, just like the previous one, is in Dodgson and Cui’s coloring, literally. The demonic figures seen thus far are self-illuminating, and the pale white-yellow glow that they give off signals their otherworldly quality. In the case of the massive summoning in the street, the coloring distorts the center of the panel, infecting the reality of the book to give an overpowering sense of these beings.

The coloring makes clear why people go insane when these events happen, the yellow hues evoking a weight and sickness that burrows deep, even in Pruflas’s summoning, which forgoes the yellow for the pinkish reds and blue that call to mind old 3-D effects, the use of color shifts the brain, speaking to the otherworldly nature of the figure. The coloring effect not only does this when illustrating Pruflas, but the reverse panel shows the trio oscillating from reality to this alternative plane.

Even the data pages don’t break the modern feeling of the issue, forgoing a grimoire or antique design for a streamlined page. They blend a simple font with occult symbols, once again serving as a bridge between the various elements of the story. The lettering creates a subtle but clear delineation in the pages, giving the data pages their own graphic language that speaks to the more organized Alfie. It also creates a separation of audience and writer, which clashes with the lettering of the issue’s narration coming from El. The looser, less text-oriented font of the narration helps to establish a link with El, humanizing her and allowing for a deeper insight past the words and bluster she offers.

Damn Them All #2 is a follow-up issue that may be just as strong as the first, trading some of the magical spectacles for a deeper look into the story’s setting. From the opening pages of the school shooting to the degrading of magical rules and then an extended conversation about said occurrences, Spurrier’s script weaves an effective look into how the world and El by extension are having to reckon with her uncle’s death. Pairing that focus with Adlard's art, which renders the reality-shattering demons and concrete world of urban England, the issue finds the right balance that makes an urban fantasy succeed. The first issue on its own was a strong contender for one of the best books of the year, and issue two reinforces that call.

Damn Them All #2: Gotta Exorcise Them All