Daredevil #2: Fate or Free Will? 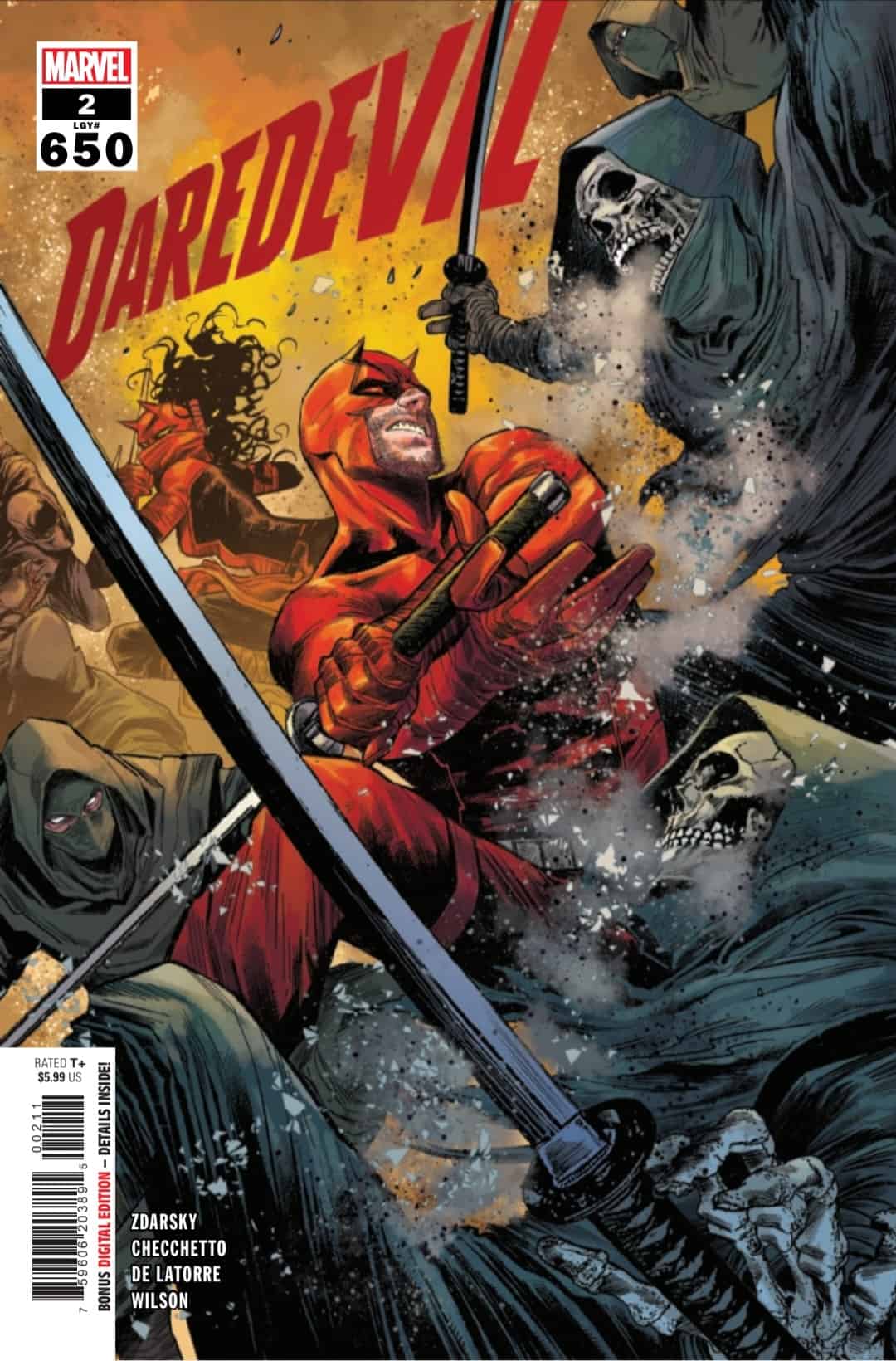 After DEVIL'S REIGN, everything it has ever meant to be DAREDEVIL has changed. Thanks to ELEKTRA and her newfound role as the Woman Without Fear, Daredevil is more ambitious than EVER, with a who's-who of creators from across the fabled character's history (and some can'tmiss surprises along the way), this oversized epic kicks the next year of Chip Zdarsky and Marco Checchetto's landmark run on DAREDEVIL off in explosive style!

Despite a strong desire to believe we are in full control of our lives, the only thing we can really control is how we react to the circumstances we find ourselves in. And despite our best attempts to prepare for those changes in circumstances, we can never fully anticipate what we will face.

This idea is at the heart of Daredevil #2. The issue opens with Matt reacting to Kirsten’s apparent death when her train exploded at the end of the first issue. This event sets up an extended conversation between Matt and Goldy, who claims to hear a voice he thinks is God and believes he knows how to influence events to make Matt into a stronger hero. Eventually Goldy goes into a long speech, explaining why the day’s events happened and tying it back to pivotal points in Matt’s past.

Matt, unsurprisingly, resists this idea. At least he does at first. Eventually, though, he does consider that maybe he isn’t in control of his fate but rather God is. This adds an intriguing color to the idea. Matt’s background as a Catholic forces him to ponder that no matter who controls his fate–himself or Goldy–God is the origin of it all. Through this character trait Zdarsky infuses Daredevil #2 with subtextual questions about free will–not just asking whether we are ultimately responsible for the choices we make, but whether the events that help shape our lives and lead us to make those choices are random or manipulated by something beyond us. Goldy even stimulates this consideration when he asks Matt why he lives with guilt if an omnipotent God is responsible for everything.

Another idea Zdarsky is playing with in Daredevil #2, at least in implication, is that it is only adversity that makes us stronger. All of Goldy’s actions, taken at the behest of the voice he believes is God, result in a negative outcome which he claims will push Matt to become a better hero. At no point does Goldy even present the idea that he might take action leading to positive results that would in turn influence Matt in the same way,

Zdarsky’s use of flashbacks prompts a familiar artistic choice: the use of a separate artist for the flashbacks. It is a night and day contrast with De Latorre employing significantly less shading than regular series artist Checchetto.

There’s also a significant difference in color choice. The sequence in the present takes place almost entirely at night which obviously prompts Wilson to use darker shades throughout, a significant contrast to the brighter flashback sequences. A side effect of that necessity is that Goldy and Matt’s interaction is underscored by a sense of despair consistent with Matt’s mood after he sees Kirsten’s train explode and as he confronts the ideas Goldy is presenting to him. 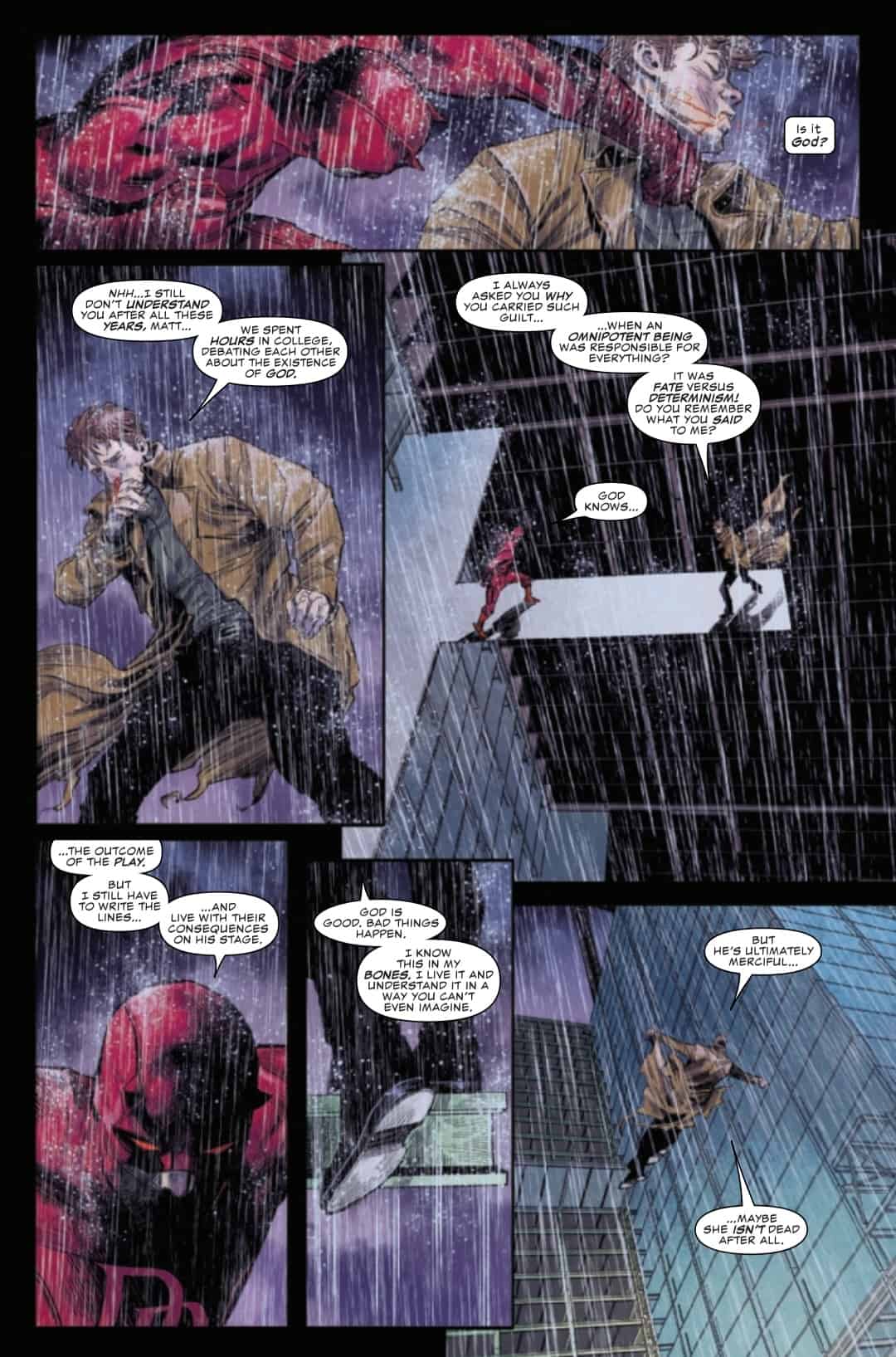 Zdarsky’s exploitation of Matt’s established history as a Catholic who is a real believer even if not an actively practicing one adds an extra dimension to a philosophical discussion. If not for that, it might be easy for a character to dismiss Goldy’s claims. Matt doesn’t really have that luxury. And in a certain way this plays into a reveal in the final pages. Zdarsky ultimately leaves Matt’s reaction to what Goldy tells him somewhat open-ended which makes Daredevil #2 a very compelling presentation of this theme. It makes for an exceptionally strong character story that highlights Zdarsky as an ideal writer for Matt Murdock.

Daredevil #2: Fate or Free Will?