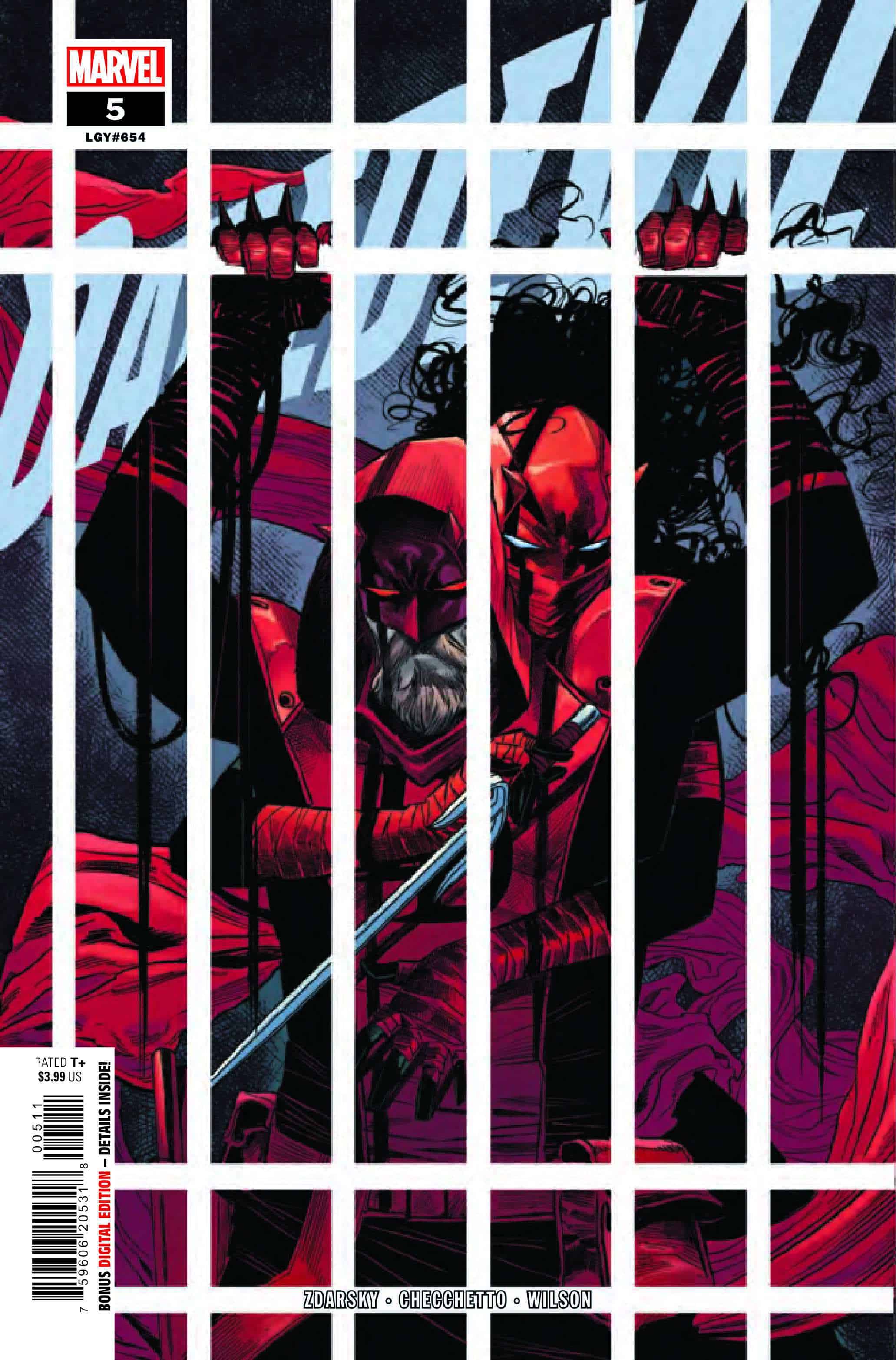 After the biggest change to befall Matt Murdock in decades in the pages of Daredevil #4, Matt Murdock and Elektra Natchios embark on establishing a new world order, hand in hand.

Daredevil #5 feels like a new first issue. After a rocky transition in the last issue–one that I criticized for leaning on tropes and offering a somewhat vague smokescreen in place of character exploration–Daredevil is free to chart a new course, and Zdarsky and De Latorre embrace it.

Zdarsky takes the opening pages of Daredevil #5 to establish the new status quo following Matt and Elektra’s “marriage” that claimed leadership of the Fist. The combat trial that doubled as a ceremony carried with it tangible benefits: everyone serving the Fist has gained new strength, speed, and agility. Even Matt’s own abilities have increased. But what the trial/ceremony didn’t do was give Matt and Elektra a full size army. To add to his numbers Matt and the men he does have set off to liberate a super villain supermax known for its inhumane conditions.

Matt’s old life in New York at last feels fully behind him in this issue. Even Foggy’s presence, while adding a certain lifeline to Matt’s long established character, feels divorced from a connection to the city. This is a smart way to balance the needs of keeping the series grounded in some of its basic history while expanding in a new direction.

The issue revisits Cole as well in the opening pages. His development continues to be almost entirely two dimensional. In Daredevil #5 Cole appears for a few panels discussing how he feels unnatural with the new abilities he’s gained. The idea of Cole coming along–the man who worked within the system, saw its problems, and took to working outside it–is an interesting one. But here, like In Daredevil #4, Zdarsky explores the character in only the most superficial of ways.

On a story level, much of the elevation this gets is a result of the time we spend in Matt’s head. Like the time spent with Cole in Daredevil #4, Matt’s internal monologue was surface level and not illuminating. Here, on the other hand, Zdarsky dives deeper, touching on matters of Matt’s faith and his continued disillusionment with the system he was content to work within for years. Zdarsky ties both trains of thought to Matt’s mission to the supermax which makes this much more a character story than a plot based one even as it is a very nuts and bolts plot development.

Marco Checchetto returns for the art in Daredevil #5, and he is particularly adept at drawing this bearded, more rugged Matt Murdock. He gives the character a great deal of presence. But more interesting is what Checchetto does with Matt’s eyes. Behind the messy hair, the beard, the new costume and robes–Matt is still recognizable as Matt.

Wilson’s coloring continues to be a stand out as well. The way he handles different light levels almost makes Matt into two separate characters–one of them obviously connected via a throughline to the Matt Murdock we’ve always known, and the other reminiscent of a kind of legendary warrior with no connection to Matt and Hell’s Kitchen. It’s a fascinating look at duality of character accomplished subtly and purely artistically.

Daredevil #5 is really the first issue that feels like the promise of Zdarsky’s new direction is starting to be fulfilled.The goodbyes are said. The old love is in the rearview mirror. And the transition, handled somewhat clumsily in the previous issue, is over. It’s another solid issue that keeps the new storyline fresh and interesting.