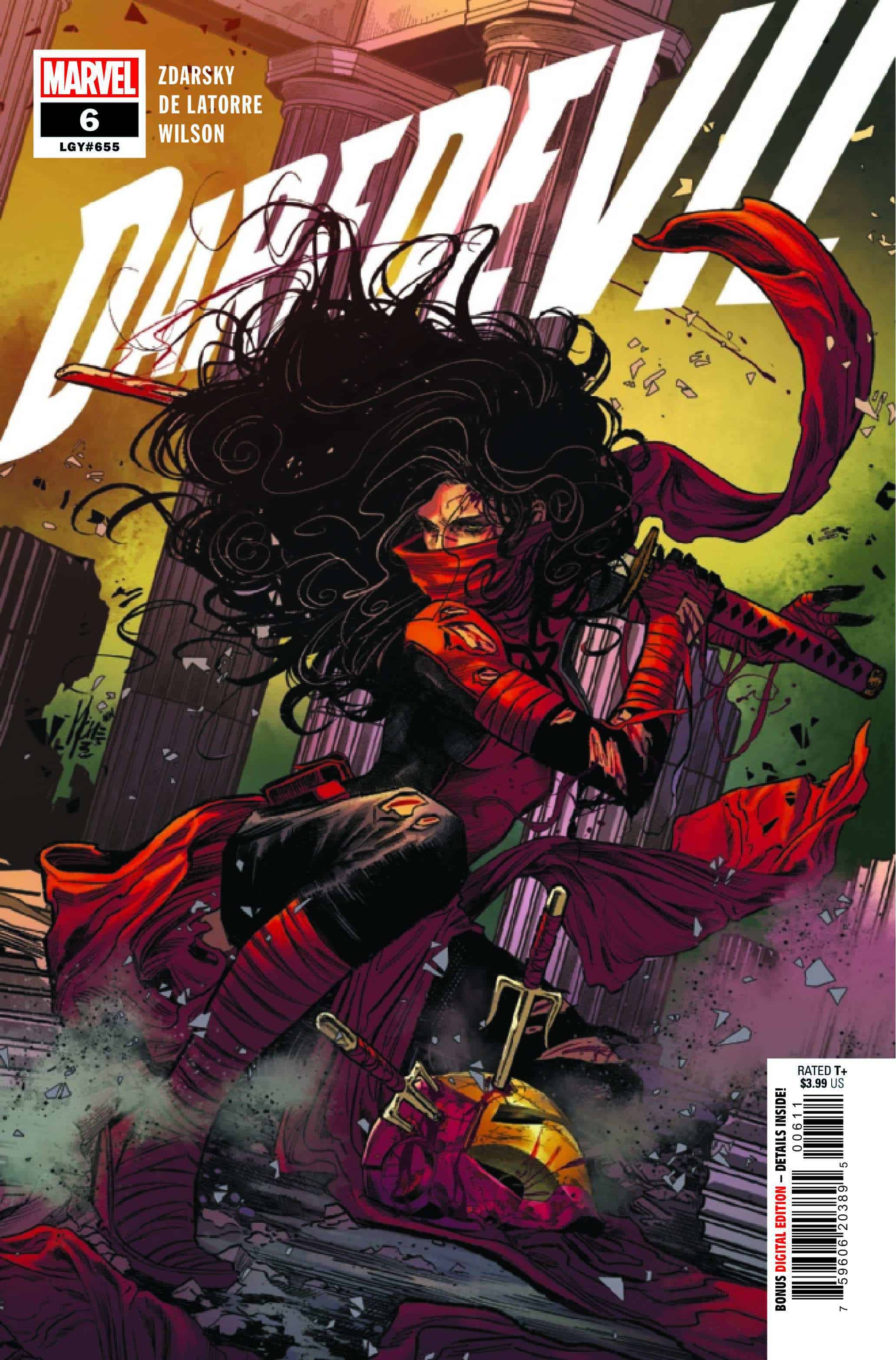 In the most shocking issue of Chip Zdarsky and Marco Checchetto's landmark DAREDEVIL epic yet, Elektra finds herself at the center of an international incident that threatens to put her, Matt Murdock and everything they hold dear on a collision course with the Avengers - after which, things may never be the same!

“I’m in control. Maybe for the first time.”

Matt says this to Goldy near the end of Daredevil #6, and it’s a fascinating line–seemingly intended to represent everything that Matt has been doing since this latest run of the series began. But is he really in control? It’s a question worth asking after this issue.

In the wake of the last issue’s prison break, Daredevil #6 opens with the liberated prisoners back at the Fist’s base. Matt has removed their power-dampening collars, set them up with therapy sessions with Doc Sasquatch, and begun training those prisoners interested in helping his cause. As Matt explains it to everyone, they are free. Meanwhile, Elektra is on a mission investigating the possibility that world leaders have been compromised by the Hand. Her target is the president, but she encounters resistance from Iron Man along the way.

While most of the people Matt and Elektra liberated seem happy to be at the compound (and some even to fight alongside them) there are a few that don’t see this as a positive opportunity. Buck Chasman, a criminal known as Bullet, points out that there’s no real freedom to be had now that he’s been broken out. By breaking him out of prison, Matt and Elektra have turned Bullet into a fugitive; he can’t go home without risking additional imprisonment. Matt insists he’s doing this to truly help people–rehabilitate them rather than simply punish them. He insists everything he is doing is for the benefit of others. Bullet., having a little alternative, is willing to play along. But he merely sees Matt as his new warden.

The one person Matt hasn’t fully “liberated” is Goldy. He’s the sole escapee who is still wearing a power-dampening collar. Goldy suggests it’s because Matt is afraid of being influenced by Goldy’s power (though Goldy insists he’s only ever used his power to nudge Matt toward the correct path). But Matt wants to be in control of his own life and so he is, effectively, maintaining control over Goldy.

Daredevil #6 sees Zdarsky examining the idea of Matt controlling his own life for the second time in the brief life of the current series run. In the previous instance, it was in response to Goldy’s claims to have influenced Matt’s life. This led to Matt contemplating whether, given his belief in God, he truly does have free will.

Here Matt believes that thanks to his new course of action, outside a system he came to believe is flawed and as the leader of the Fist, he has taken control of his life. But it’s interesting that he says this as someone whose Catholic faith has not changed and as someone who is following a prophecy. Further, Matt’s sense of control has come at the cost of him controlling others–as Bullet points out. And he apparently doesn’t believe he can resist Goldy’s powers or he wouldn’t keep him on a metaphorical leash.

It’s also of note that Goldy is only present because he previously surrendered himself to the police. Without taking that action, he wouldn’t be with Matt now. Matt doesn’t know this, but it’s worth remembering as Zdarsky continues to chart Matt’s new path and his confidence in it.

The various character beats in Daredevil #6 are well done–and all the more effective because the resulting revelations are handled through implication via dialogue rather than explicit statements through narration. It’s an excellent example of Zdarsky’s skill at character development.

De Latorre’s return to the art duties is well-timed. His tendency toward greater facial detail helps to convey a lot of emotion, and that’s particularly effective here. De Latorre’s work lends a great deal of weight to the Bullet and Goldy scenes, adding a lot of feeling to the arguments each man makes against Matt’s assertions of pure benevolence. That level of emotion significantly reinforces each of their arguments against Matt–something very helpful since the reader’s natural inclination might be to take Matt’s arguments as truth, potentially missing the shades of gray at work here.

Matt’s look in this issue is somewhat cleaner than in the past few issues. He still has his beard, but it feels softer and less rugged. Though in a general sense this is neither better nor worse than Checchetto’s art, the different style makes Matt more visually sympathetic, something that helps him in the scenes with Bullet and Goldy. This kind of detail in the characters involved adds a great deal of complexity to the exchanges, reinforcing the fact that there are no easy answers for Matt even though he repeatedly insists otherwise.

Daredevil #6 returns to the very strong character work from the first three issues that still took place in New York. Issues four and five both dealt with Matt’s transition to the leadership of the Fist (especially four). But both were more nuts and bolts plot oriented. And while this issue does significantly advance the plot via Elektra’s scenes, the strength of the issue is the character beats which are what has made the series compelling from the beginning.