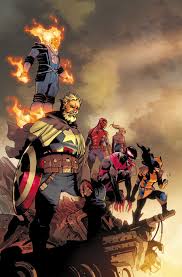 With Apocalypse a mere hour away from living up to his name, can Earth's last heroes breach his Louver-based fortress in time to save what remains of the planet from your proverbial fate worse than death? This is a Tom Taylor alternate reality story. You can probably guess the answer to that.

This issue was a hell of a lot of fun. It was the conclusion of a fairly straightforward plot, as plain and unassuming as the stick in the center of a corn-dog, but it was wrapped in some nice, meaty characterization and dusted with a pinch of crunchy violence. Like a corn-dog, it wasn’t the kind of story that you could live on (too much of this sort of thing would be very bad for you) but it was perfect for a fun, springtime-reading snack.

The best parts, for me, were the glimpses that we got of the ways that these characters’ relationships have evolved in the time elapsed since the EMP knocked out power across the globe. Watching Adult Gabby crack wise with Deadpool (over the corpse of someone who definitely deserved getting torn in half) was worth the cover price all by itself. Seeing Sue Storm lobotomize a baddy using only her forcefields was absolutely a highlight of my week.

As I said, the plot progressed pretty much exactly as one would expect, given the previous issues. This isn’t a flaw, given the context. It’s almost startlingly violent — there are a grand total of four dismemberments— but they’re balanced by the love which serves as the heroes’ motivation.

Iban Coello’s art was astonishing: detailed without being cluttered; narratively clear, without being overly simplistic. Some standout moments included one flying skeleton, one dinosaur in a cast, one bullet entering a brain, one teleporting devil-pirate, a hulk, several broken monuments, and a buttload of flying intestines. Brian Reber’s colors were incredibly vivid. They were bright and cheerful, appropriate for both the overall tone of the book and also to better see the blood.

This was a satisfying conclusion to a wonderful story. I’m so sorry to leave this world behind. If only every apocalypse could be so beautiful.

This was a satisfying conclusion to a wonderful story. I'm so sorry to leave this world behind. If only every apocalypse could be so beautiful.