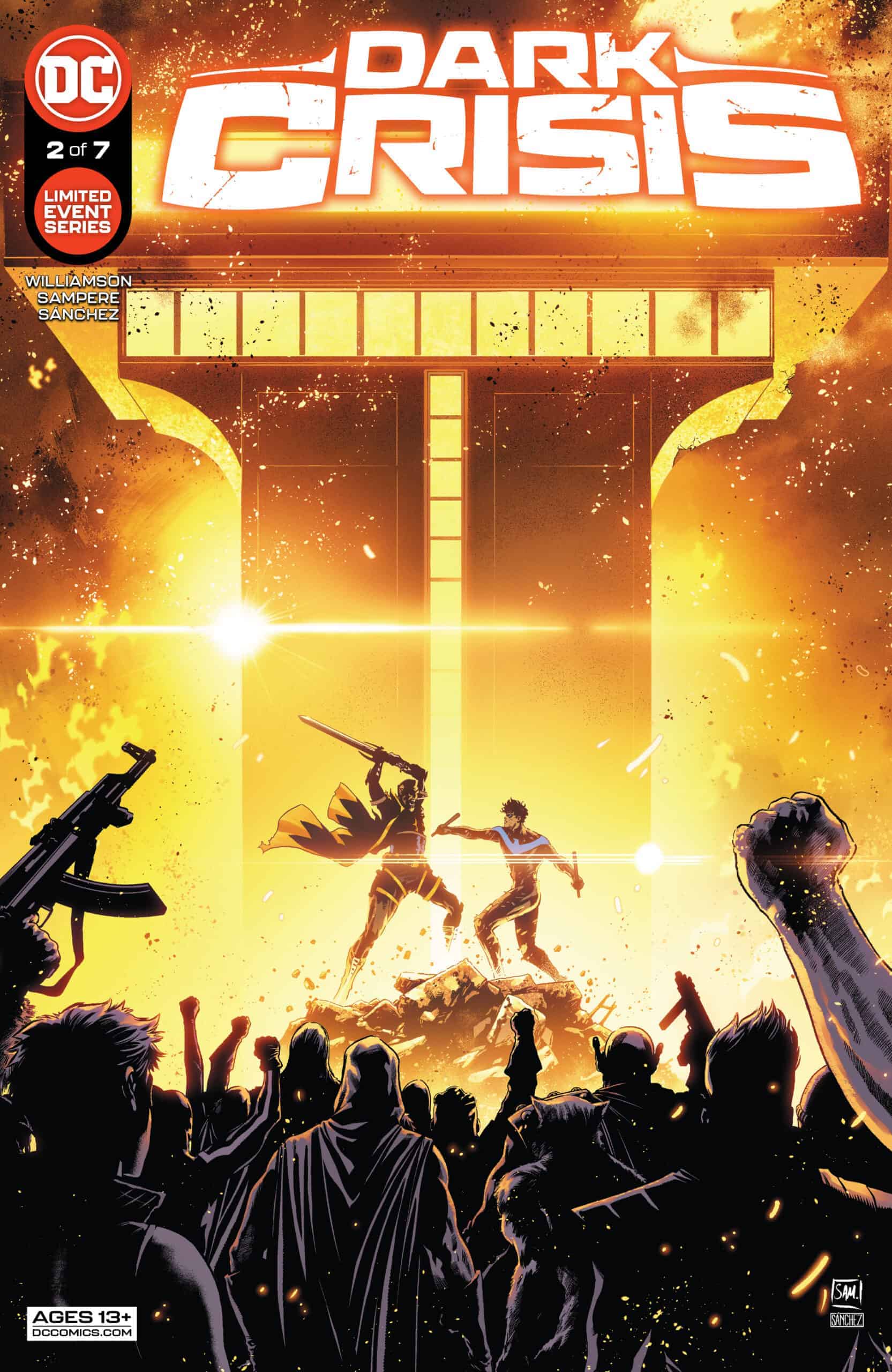 The house of Nightwing burns as the good people of the world mourn the loss of the Justice League, the forces of evil have seized the opportunity to wreak havoc in a world without its heroes! Leading the charge is a super-powered Slade Wilson…but this time there’s something dark fueling his rage. With a massive army laying siege to Titans Tower, only Nightwing will have what it takes to stand in the way of Deathstroke’s forces—but is this a fight Dick Grayson can win? Look, up in the sky—reinforcements are on the way! It’s a bird! It’s a plane! It’s…uh-oh…it’s Cyborg Superman.

DC’s event of the summer continues this week as Dark Crisis #2 hits the shelves.  The comic picks up from an opening issue wherein Green Lantern, the Flash (West), and young Superman Jon Kent reeled from the death of the Justice League in the 75th and final issue of that team’s latest series.  While Green Lantern and the Flash searched for answers, Superman floated solutions to fill the vacuum left by the death of his father and the rest of the Justice League.   When that pursuit led him to Nightwing and Titans Tower, though, signature Titans villain Deathstroke launched an all-out assault on the first Robin and co.  This week, writer Joshua Williamson worked on explaining the mercenary’s brutal attack and possible replacements for the deceased Justice League.

To begin the issue, Nightwing, battered from last week’s explosion at his home base, raced to protect his proteges from the raiders of Deathstroke’s Secret Society.  It quickly became clear that the hero himself was the focus of the attack when Slade stated that he would make an example of perhaps the Earth’s greatest surviving hero.  A millionth fight between the two ensued, carrying all the brutality one would expect from the familiar foes.

Just as it seemed Jon Kent would make a timely intervention, the newest Superman was blindsided by a frequent dance partner of his father’s and a fun choice from the creative team.  The solicit for the issue may have spoiled that character’s introduction, but his ability to go blow-for-blow with Superman pushed the young hero to his limits in a brief but brutal encounter.

Deathstroke’s cruelty and directness so far in the series is uncharacteristic of recent portrayals of the character but is predictably explained as the pervasive influence of the series’ main villain, Pariah.  Still, Deathstroke’s mischaracterization and nerfing is not helped by the fact he has probably been overexposed of late; hopefully, Williamson can rehab his credibility by the series’s conclusion.

In the issue’s closing pages, Black Adam is thrust into an unfamiliar role, and Green Lantern recruits one of DC’s most powerful heroes into the fight.  If that character can properly return to prominence as more than just a member of a wider team, Dark Crisis will already have positive outcomes for DC through just two issues.

Daniel Sampere’s design for Deathstroke is a bit foreign, but on the whole, his pencils have the realistic details that are the hallmark of many modern A-list comic book artists.  The two extended fight sequences in the issue, in particular, are visual highlights.  Many more such highlights can be expected when this mini inevitably kicks into gear.

Dark Crisis #2 focuses on providing the action expected of this sort of summer blockbuster while sneaking in major plot points towards the issue’s end.  Williamson’s willingness to let Jon Kent shine as Superman is the strength of the comic, but a lack of revelations as to Pariah’s plans mean most of the plotting is dedicated to solidifying the title’s cast of heroes.  That those heroes are not simply the original Teen Titans, who have always been considered heir-apparent to the JL but are presented as inept here, is something of a puzzler.  Dark Crisis #2 is an altogether tight read that can- and most likely will- be improved upon as the series continues.