Dark Crisis on Infinite Earths #5: What’s in a Legacy? 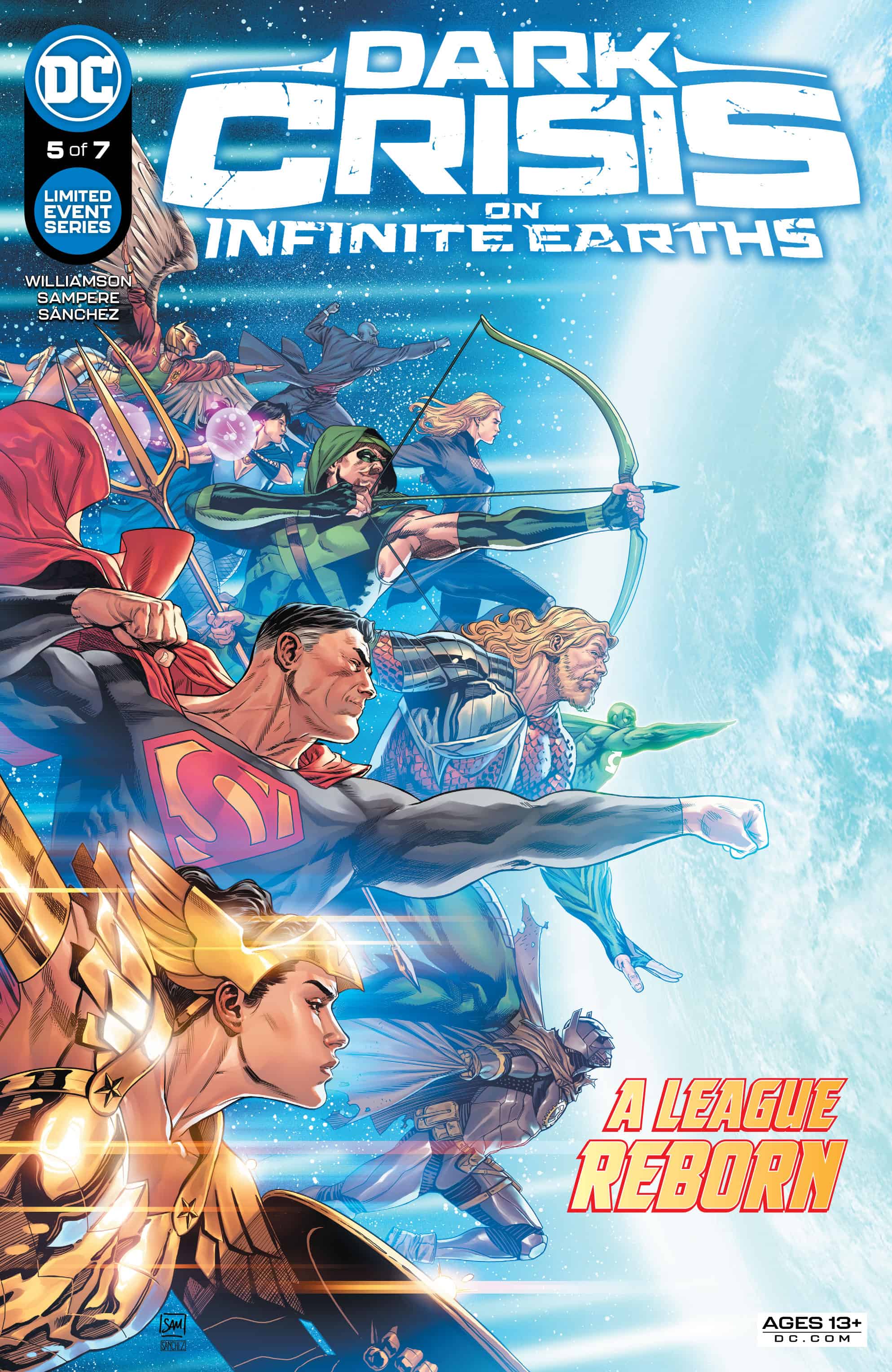 WAR AT THE HALL OF JUSTICE! After the shocking events of the last issue, Pariah has won. And now his Dark Army is poised for the invasion of our world. It’s up to the Titans to rally the remaining heroes to defeat Deathstroke’s ever-growing forces and avert total destruction! An epic war starts on the steps of the Hall of Justice, and only a miracle could help the heroes now. But all hope is not lost, as the worlds without a Justice League have begun to loosen their grip…but can the heroes return to Earth if it means one member of the Justice League could be lost forever?

Event fatigue and superhero fatigue seem to be the buzzwords on the minds of detractors for superhero stories across mediums, tapping into the same well of criticism. Highlighting this point, for the record, is not to dismiss or trivialize critics of the MCU pipeline, or the grindhouse that is corporate comics. It’s the idea that when an MCU movie doesn’t make a billion dollars or faces any criticism of any kind, it’s the notion that those arguments get reduced to a general weariness for the concept of superhero stories.

The same general concept occurs in comics regarding events, which has become one of the primary driving forces for the Big 2’s publishing lines. Sometimes it can feel like Marvel and DC continuously push one event after another, trying to generate hype on the scale of summer blockbusters like Star Wars or The Avengers. In reality, the issue with events is when they feel like corporate checklists rather than works of art – flawed or not is another question – and lack a voice with something to say, is when they falter.

Dark Crisis On Infinite Earths #5 – written by Joshua Williamson with art by Daniel Sampere, colors by Alejandro Sánchez, and lettering by Tom Napolitano – takes its third act turn in the event, building off Pariah’s plan to reignite the infinite multiverse that was destroyed in the original crisis, using the thought dead Justice League to dream new worlds into the endless void. Back on Earth, the remaining heroes, led by Nightwing and other legacy characters, plan a full assault on Deathstroke, who they’ve learned is the center of the darkness on Earth. The plot intersects with this week’s The Deadly Green tie-in to also reveal that Pariah has corrupted the Great Darkness for his multiversal plans, which are spreading and tearing the multiverse apart. The League manages to break free of Pariah’s simulations thanks to Barry Allen and Hal Jordan, returning the supergroup to the prime universe just as Pariah heads to witness the death of a world.

On paper, Dark Crisis on Infinite Earths has everything that makes a good line-wide event. It has an epic scope handling multiple generations of heroes, a powerful, overwhelming villain, and art that knows how to make every page a spectacle. But with every issue, there’s a nagging feeling in the back of the mind when reading Dark Crisis. It’s like a low thrum, providing rhythm that makes it impossible to immerse into the story. It’s not event fatigue like many would suspect, as Judgment Day at Marvel barrels forward with a strong critical reaction. At its core, the issue with Dark Crisis is Williamson’s message or themes are disjointed and messy. In some pages and interviews, he described the series as a book about legacy characters, and the opportunity to see a Crisis from their perspective. But in the same breath, he’s undercutting that message of passing the torch by creating situations only the primary Justice League can solve.

With respect to the various Crisis, each one had something to say or do, whether it be Geoff Johns talking about the darker edge that the DCU had taken in Infinite Crisis, to Grant Morrison’s metaphor of editorial control of stories in Final Crisis, to Wolfman’s attempts to streamline and simplify a messy DCU in the original Crisis. There was a drive and layer metacommentary to each story that gave it an additional dimension that ensured these books don’t feel like slogs, while also ensuring they function as both timely and timeless stories. Williamson’s story, on the other hand, feels like neither and reads like an approximation of them. It’s hard to pinpoint where it goes wrong in the timeline of the big 3 act story he’s telling. Infinite Frontier and Justice League Incarnate were narratively a lot tighter, with a strong sense of character p.o.v. and build-up that make it seem like the way forward for DC. But it seems that about the time of Justice League #75 is where the threads start to loosen.

This issue also makes clear the event needed a p.o.v to root the story into, to connect with the audience, and give a lifeline for these massive, universe-spanning events. Nightwing seems like the obvious choice based on what Willaimson has stated he wanted to go for in terms of scope and theme, but the former sidekick disappears from issue to issue and seems reluctant to accept. Black Adam was another contender for the role, but the character is so inconsistent and at odds with his place in the hierarchy of the DC universe. This issue also makes the mistake of working to bring back the main DC characters like Batman, Superman, and the rest of the League. In an event that’s supposed to show the growth and progression of its legacy characters, it feels like a waste to have the Justice League swoop in for the last two issues and most likely save the day. The issue sets up the Titans winning the fight, but the issue’s cliffhanger cuts out that hope like in previous issues, serving less as a moment for the team to rally and playing it as an inherent weakness in these characters that should be the new Justice League by now.

What makes this lack of a clear theme or voice so frustrating is Sampere’s art killing everything on the page. This is an artist that just flat out gets the DC Universe, from character designs to action sequencing and blocking, to strong emotional moments. The way that Sampere incorporates The Multiversity multiverse map onto the page and smashes dark energy to it would be contrived with another artist, but he sells the visual representation on the page, making it feel organic to the story. His style blends gritty, kinetic action and cosmic happenings into a more cohesive look at the universe.

There’s a particularly stunning splash right after the title page, in which Pariah watches the returning infinite Earths, and is a gorgeous spread. The endless helix of Earths spanning across two pages is breathtaking and adds weight that story and script struggle to live up to. It’s heightened by Sánchez’s coloring, which gives the book an appropriately cosmic palette, with plenty of pink, purples, and blues for the multiverse-spanning moments, while the Earth-0 sequences are bathed in reds and oranges. It helps to separate the two plotlines, giving them two distinct styles that highlight the different portions of the DC universe.

Dark Crisis on Infinite Earths #5 is an event comic that should be a slam dunk, and in many ways is on paper, but without a clear resonate core, ends up feeling like a hollow series of amazing images on the page. With two issues left in the main title, I’m willing to admit everything could fall into place and reveal that missing piece, but based on the first five issues, that seems unlikely. That doesn’t mean this book should be ignored, as Sampere and Sánchez’s work on this book is some of the best work delivered from DC in recent years, which is a testament to the company’s output for art has been top notch. This comic and Judgment Day from Marvel are proof that for many it's not even fatigue that kills momentum for a massive story, but the underlying message, or lack thereof.

Dark Crisis on Infinite Earths #5: What’s in a Legacy?