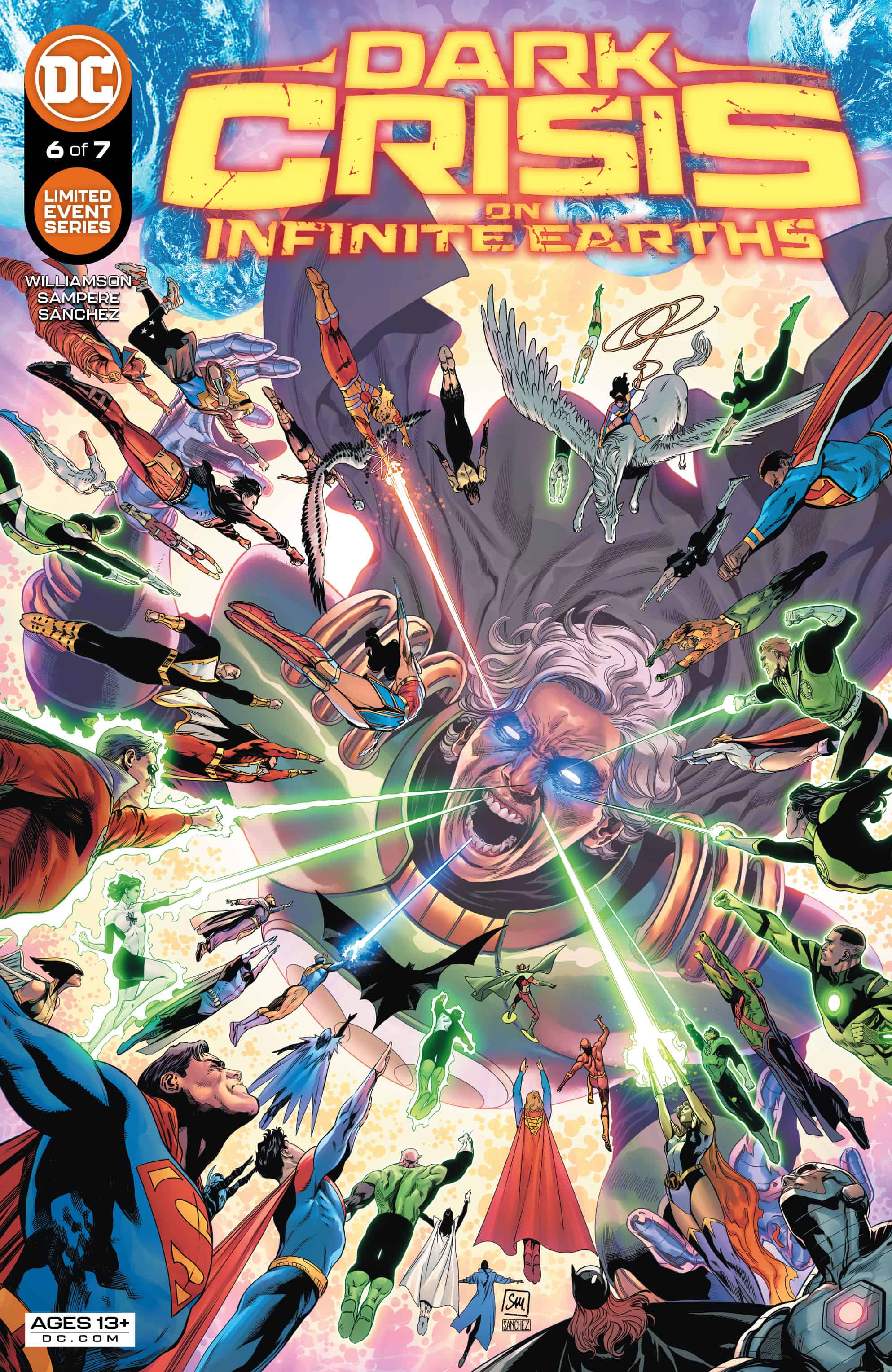 War erupts as more heroes are taken at the hands of Pariah! The fate of the Multiverse depends on the young heroes of the DCU as they clash with Deathstroke and the Dark Army! Can the resurrected Justice League race home to Earth-Zero in time to join the fight...even if it could mean that not everyone gets to return?! And what dark powerhouse rises on the battlefield? Do not miss this incredible breakneck battle royale!

A piece of pop culture that’s added a term to my creative lexicon is the comedy podcast Dungeons and Daddies, which coined the term ‘five-footer’ in its first season. The term refers to an episode where the adventuring party – four dads transported to a fantasy realm trying to rescue their lost sons – only move five feet in an episode, usually occurring right after a long stretch of combat or a plot-heavy episode.

These five-footers usually prioritize group dynamics and reinforce the stakes for the larger plot, while also allowing both the characters and audience to catch their breath. It’s an effective and necessary step in the storytelling process, and what gives the series such a lasting appeal. It’s also a mechanic that other mediums and genres can take note of and learn from, including mega-events from comic publishers like Marvel and DC.

Dark Crisis on Infinite Earths #6 – written by Joshua Williamson, with art by Daniel Sampere, colors from Alejandro Sánchez, and letters by Tom Napolitano – continues the battle between the remaining heroes of Earth and the darkness-infused villains following Deathstroke, as Pariah arrives on Prime Earth. Deathstroke is attempting to kill Beast Boy and the various legacy heroes, as it will set him free and allow the darkness to overtake the universe. Meanwhile, the missing Justice League works to develop a plan to return to the Prime Earth, having escaped from the fake worlds created by Pariah, who’s been revealed to not be under the influence of the Great Darkness, instead basing his action of insanity induced by guilt and isolation.

Williamson’s script keeps the wheels spinning for the series, with minimal changes to the stakes and plot. It feels like an even split between a five-footer and a plot-heavy issue, throwing scene after scene to the audience, without actually progressing more than about five feet from the beginning of the issue. Sure, Pariah has been defeated by the end of the issue, and the Justice League returns to the Prime Earth, but there’s no sense of catharsis or resolution. Clark and John Kent get a moment to reunite, but it’s swallowed by the book’s cliffhanger, working like a checklist rather than a cohesive and emotionally driven story beat.

It’s a similar case for other story beats in this issue, like the immediate confrontation between Deathstroke and Beast Boy. It was only an issue ago that Beast Boy was shot by the villain, and there’s been no time to reflect or internalize the act, throwing the two into a shallow conflict in this issue. There’s no weight or heft to the scripting at this moment, in the way that it sacrifices character and interpersonal drama for spectacle.

The resolution to Pariah, who along with the Great Darkness has been billed as the big bads of the crisis, is a lackluster conclusion. Combined with the pivot to Deathstroke as the antagonist for the final issue, the choice reads like indecision and lack of thematic thought to the series, as though the book is trapped between wanting to be a commentary on either Crisis or Legacy characters, but falls flat on both accounts. On paper, based on the events of the previous five issues, and multiple lead-in series, the reveal makes logical sense but in execution, it feels like a conclusion that refuses to end the story or speak to the half-baked themes it espouses. 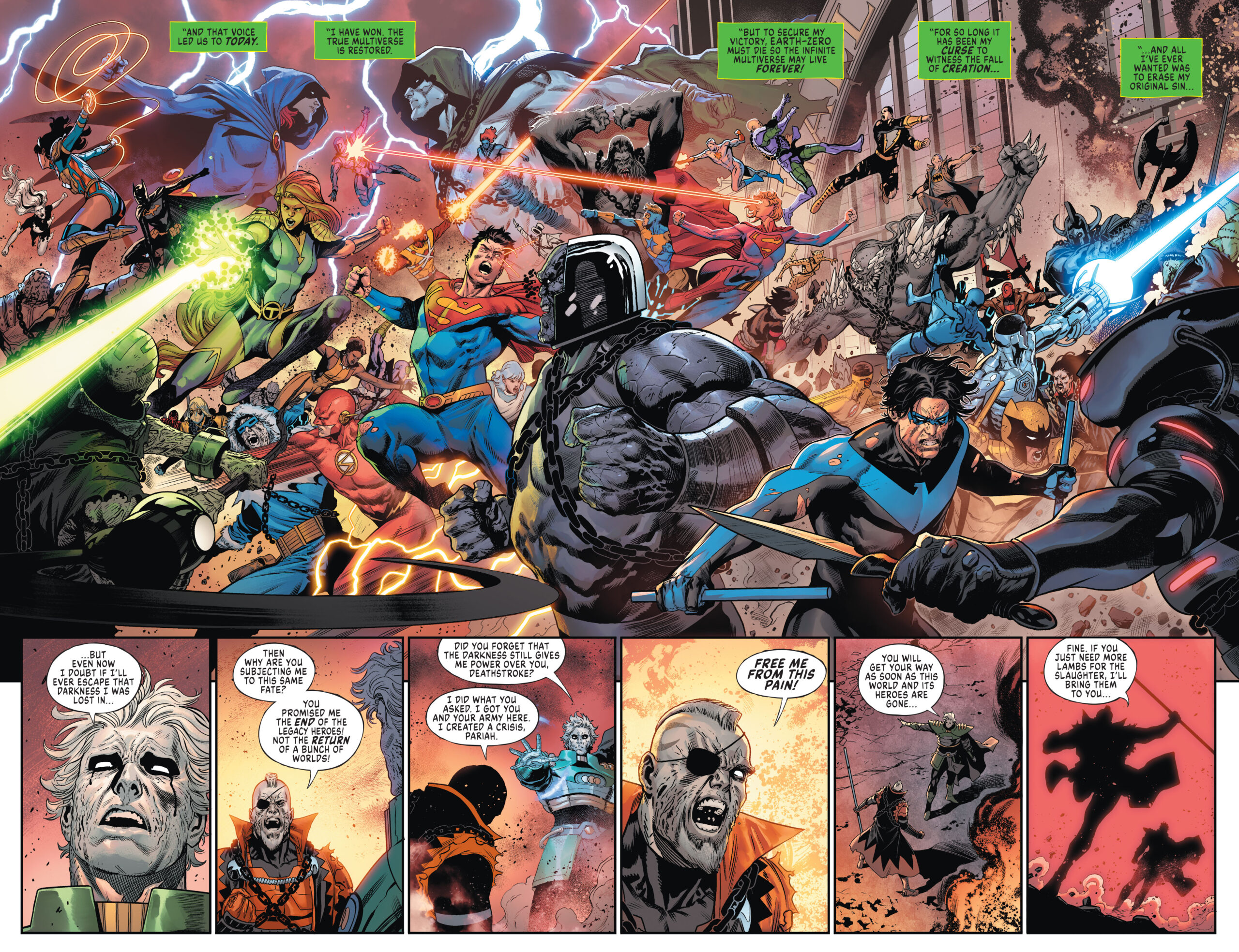 Sampere’s art is still top-notch with this issue, illustrating a DC Universe at the grandest scale with coloring that plays to the cosmic aspect of the series. However, the stunning art and gorgeous palette can’t save the issue and the series at large from its worst tendencies. The splash pages in this issue make for great posters, but there’s no emotion or thematic resonance for readers to attach to in these moments. Good action, like good dancing in a musical, should express what can’t be put into words. It should be an extension of the story and offer an additional dimension to the work. Here, the action doesn’t do that at all, instead, it’s just a surface-level fight that plays the epic scale to create a spectacle in the place of emotion. It’s a well-rendered, well-blocked smashing of action figures that has little to offer beyond that spectacle.

It’s fitting that some of the most interesting and dynamic images of the issue would be renderings of the dark energy spreading through the multiverse, as Sampere renders those moments in a distinctly two-dimensional way. Instead of giving snapshots of the various worlds under siege, readers are instead shown the multiverse map first seen in Grant Morrison’s Multiversity, with effects like crackling energy overtaking or distorting the various worlds.

In previous issues, these images of the distorted map were an excellent visual representation of what’s happening to the multiverse, but as the story has progressed, it’s become clear that this choice is an inadvertent reflection of the series. Dark Crisis on Infinite Earths is less an organic story and more of a table-setting event building off other table-setting events to try and reform the landscape of the DC Universe. It is well illustrated, just like the map of the multiverse, but is also like the map in that it is two-dimensional and flat.

Dark Crisis on Infinite Earths #6 is another hollow spectacle in a series full of them, trying to simultaneously establish a new DC Universe without establishing an emotional or thematic reason for fans to care. The reveals are telegraphed and unimportant, as they’re repeatedly undercut in an attempt at a metacommentary on the nature of the crisis, speeding through the plot without really engaging with the various beats. In a massive, universe-spanning event, Dark Crisis could have used a true five-footer issue, where characters could pause and regroup after the relentless plot and provide emotional context and reinforce the human-level stakes of the series. With only one issue to go, one can only hope the dawn of the DC Universe is brighter than this crisis.