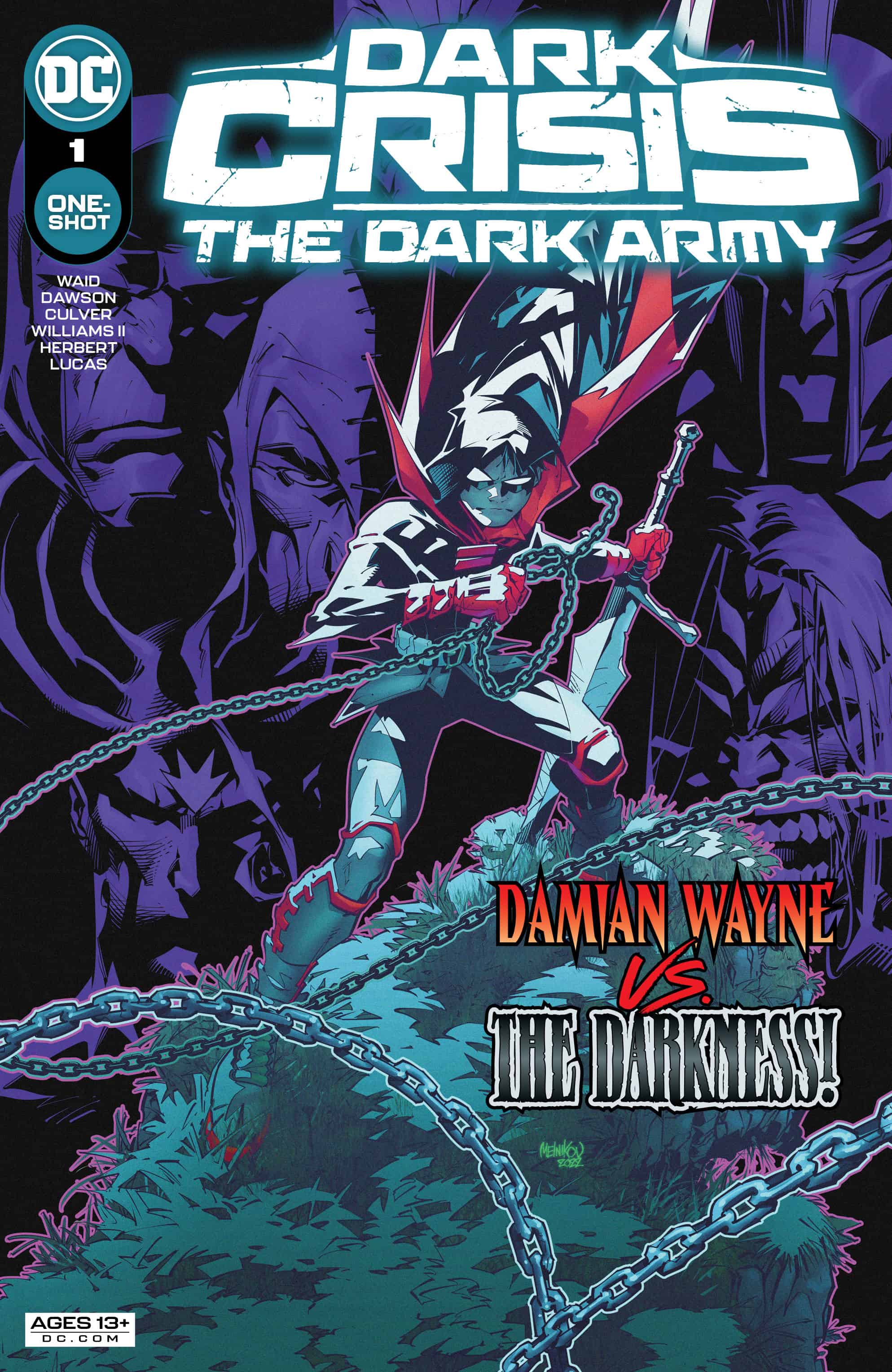 As Pariah’s Dark Army continues its march around the globe, Damian Wayne thinks he’s got an answer as to why Pariah is able to control the most dangerous cosmic villains of the Multiverse—and he’s taking Red Canary and Dr. Light on the road to see if he’s right! Don’t miss this thrilling Dark Crisis tie-in with direct connections to the present and future of the DCU!

Dark Crisis: The Dark Army #1 – written by Mark Waid, Delilah S. Dawson, and Dennis Culver with art by Freddie E. Williams II and Jack Herbert, colors by Adriano Luca, and letters by Troy Peteri – picks up in the middle of climatic battle of Dark Crisis on Infinite Earths #6, before the lost Justice League returns to prime earth. The issue puts the spotlight on Damian Wayne’s Robin as he recruits a team of Power Girl, Sideways, Dr. Light, and the recently introduced Red Canary to find a way to defeat the possessed army of supervillains. The issue follows the team as they jump to a world of apes that’s been wiped out by Pariah’s machinations, and uses a cosmic tuning fork to find the coordinates to the damaged satellite of the Monitor from the original Crisis on Infinite Earths.

It’s here the Justice League Incarnate, who’s been missing since their titular series that led up to Dark Crisis, is discovered to be under the thrall of the Darkness and attacks the slapdash team. Dr. Light discovers a power-up thanks to the surviving A.I. Harbinger, also from the original Crisis, and can free the heroes from the control of the darkness. With a new path forward and a tease to the parallel event Batman vs. Robin (also from Mark Waid), the team heads back to the prime earth to join in the final fight in the upcoming Dark Crisis #7.

The scripting for this issue is straightforward but becomes repetitive in the extended page count. The issue plays up the friction between Damian and the rest of the team, which reads as a regression of the character after his solo series. There are some great moments scattered throughout the issue, like the short discussion between Damian and Jon Kent before the vigilante undertakes his mission. Damian shows his softer side when asking Jon if he’s prepared to fight Doomsday, and it’s a refreshing beat that acknowledges the bond and comfortability between the two characters, even after the mudding of their friendship due to the age jump for Jon.

That moment is one of the few moments that showcase the growth Damian has gone through, and that side of him only comes out after a scalding from Power Girl. The beat falls flat due to a lack of action or motivation for Damian to be humbled. Power Girl tells him how his plan is wrong, but no moment or action gives Damian a reason to change his behavior. It’s a micro example of what’s wrong with the larger issue, by taking shortcuts for character development without showing through action or decision a reason for an arc of the issue. Otherwise, the issue spins its wheels with a structure of the team bickers, they discover their goal (tuning fork, Monitor satellite) and then are attacked by shadows or the Dark Army, and Dr. Light defeats the foes each time.

That weakness in the writing is also evident with the newly established Red Canary, a character created for Dark Crisis. The issue offers little to develop her character, using her as a ride-along character that has little to do beyond argue with Damian and ask questions about the multiverse. It’s a poor extended debut for the character that has a strong design and interesting potential if she’s not forgotten about in the upcoming Dawn of the DC Universe line-up. There’s never a defining moment or act of understanding between her or Damian, nor is there a heroic moment to prove why she deserves to be on the team. It’s glaring weakness in the issue that makes it hard to look past, questioning why she needed to be in the issue other than to sell a variant cover.

The only aspect of the book that helps to slightly break that repetitive narrative pattern is the change in art, with Williams handling the opening page and then from the Monitor satellite to the end, while Herbert draws the sequence taking place on the gorilla earth. The art shift breaks up the visual style of the issue but is jarring, especially with Damian’s design. William’s design for Damian resembles the current look and age, hewing closer to the Robin solo series and Batman vs. Robin, while Herbert’s pencils age Damian to his twenties in an instant.

It’s a sharp departure in style and doesn’t gel with William’s pencils. In both styles, anatomy and facial expressions are off, with more inconsistencies plaguing the issue. There’s a panel in which Sideways is attacked by the possessed Captain Carrot, and the art makes it seem like the teleporting hero’s neck is bitten into. In the next panel, he’s alright other than a gash on his shoulder. The angle of the shot is unclear, and with a panel proceeding with a background and a CHOMP SFX, the flow makes the blocking confusing.

Even with those instances, Williams’s art is the stronger of the two, offering interesting panel compositions and more vibrant fight sequences compared to Herbert’s more rout layouts. There are bigger discrepancies in the anatomy and blocking in William’s linework, but it succeeds in offering something new and visually interesting to the plot that Herbert is lacking. The action in the middle sequence reads like it could be pulled from any DC book of the mid-2000s, minus the specific costumes, and makes no lasting impression. That panel layouts are constrained and safe, even as the story offers a chance to play with a world inhabited by gorillas, and massive cosmic items like the tuning fork.

In instances of multiple artists on a title, it usually falls to the colorist to help bridge styles and create a cohesive aesthetic. Luca mostly accomplishes this thanks to an even palette that keeps the powers of various characters consistent, along with a strong use of black for the shadows. The minimal villains, which are living shadows, are some of the most striking images on the page and that is thanks to Luca’s coloring. The harsh, flat black clashes well with the various backgrounds and blue/yellow energies of Dr. Light and Power Girl. The color also helps to establish a consistency of the characters that ensures even when the art dips, clarity comes across on the page.

Dark Crisis: The Dark Army #1 is a lackluster tie-in for both Dark Crisis on Infinite Earths and Batman vs. Robin which is inconsistent across the board. From a story that spins its wheels with an extended page count and character regression for Damian, to clashing art styles with visual discrepancies, the issue has little to offer beyond a few interesting character beats here and there. The bulk of this tie-in could be explained in an editor's note of Dark Crisis #7 and unlike previous tie-ins, doesn’t feel vital to an understanding of the plot for the main event.